The new species is distinguished from O. eregliensis   from the wider Lake Tuz basin, O. anatolicus   from Lake Burdur basin and the Dalaman drainage, O. angorae   from the Sakarya and Kızılırmak drainages and Lake Ilgın basin, and O. mediterraneus   from the Aksu and Köprü drainages by possessing a deeply emarginate caudal fin in which the shortest middle caudal-fin ray is 71–85% of the longest ray of the upper caudal-fin lobe (vs. almost truncate, 88–98 in O. eregliensis   ; 84–93 in O. anatolicus   and 88–92 in O. angorae   and forked, 65–76 in O. mediterraneus   ). Oxynoemacheilus isauricus   is further distinguished from O. eregliensis   and O. anatolicus   by having a shorter head (head length 21–24% SL vs. 24–27 in both of the species). It is further differentiated from O. mediterraneus   by the strongly decreasing body depth between the dorsal- and caudal-fin bases (vs. almost uniform), and the flank blotches being usually disconnected from the saddles on the back (vs. usually connected). It is further distinguished from O. angorae   by having irregularly shaped and set, vertically elongated blotches on the flank, rarely a mottled or marbled pattern (vs. series of dark-brown midlateral blotches usually fused into a wide, irregular shaped midlateral stripe, rarely a mottled pattern). It is further distinguished from O. anatolicus   by the upper part of the cheek with none or few vermiculated dark brown spots (vs. mottled).

The new species is further distinguished from O. nasreddini   from the Lake Ilgýn, Eðirdir, Eber and Akşehir basins, by a more anteriorly positioned pelvic-fin (prepelvic length 48–51% SL vs. 51–55), and a series of midlateral blotches on flank (vs. usually a series of short bars on caudal peduncle).

It is further distinguished from O. theophilii   , from the Bakır drainage ( Turkey) and Lesbos Island ( Greece) by a strongly decreasing body depth between the dorsal- and caudal-fin bases (vs. body depth almost uniform), and irregularly shaped and set, usually roundish, rarely vertically elongated, blotches (vs. mottled without blotches).

Description. See Figures 2–4 View FIGURE 2 View FIGURE 3 View FIGURE 4 for general appearance and Table 2 for morphometric data. Medium-sized, slender species. Head short, body depth at dorsal-fin origin 1.1–1.3 times in head length. Body deepest and widest at about midline between nape and dorsal-fin origin. Body depth strongly decreasing between anterior dorsal-fin base, until caudal-fin bases. Section of head roundish, flattened on ventral surface, slightly convex in interorbital space, convex on snout. Snout roundish. Caudal peduncle compressed laterally, 2.2–2.6 times longer than deep. No or only a rudimentary pelvic axillary lobe at base of pelvic fin, fully attached to flank. Pelvic-fin origin below second or third branched dorsal-fin ray. Anal-fin origin at in front of vertical of midline between dorsal and caudal-fin origins. Pectoral fin reaching to approximately 60–70% of distance from pectoral-fin origin to pelvic-fin origin in female and 80–100% in male. Pelvic fin usually reaching to genital papillae, rarely reaching anus; reaching vertical tip of last dorsal-fin ray or slightly anterior to that point. Anus about 60–110% of an eye diameter anterior to anal-fin origin. Anal fin not reaching caudal-fin base. An elevated, short dorsal and ventral adipose crest on caudal peduncle behind vertical of posterior anal-fin base in some individuals, shallow or absent in other individuals. Largest known individual 63 mm SL.

Coloration. Background colour yellow or pale-brown with dark-brown pattern in live and preserved individuals. Dorsal head and upper part of cheek with a vermiculate or marbled pattern, cheek without pattern in a few individuals. Ventral surface of head yellowish without pattern. Flank marbled in few individuals, usually with 8–11 roundish or vertically elongate, irregularly set and shaped blotches along lateral midline, narrower or as wide as interspaces. Shape of blotches often interrupted along lateral line. Blotches on flank loosely connected by a faint inner axial stripe in preserved individuals. Inner-axial stripe absent in life. Few blotches connected to middorsal saddles, usually disconnected. Midlateral blotches usually dissociated into a fine marbles or mottled pattern on predorsal part of flank, less dissociated on postdorsal part. Back with 2–3 irregularly set and shaped predorsal saddles, saddles usually dissociated into a mottled or vermiculated pattern, 3–5 irregularly set and shaped saddles behind dorsal-fin base. Several spots, vermiculation or a mottled pattern between blotches on back and flank above lateral midline. An irregularly shaped dark-brown bar or two dark-brown blotches, often connected to each other at caudal-fin base. Dorsal fin with many, small brown blotches on rays, forming 2–3 indistinct bands. Caudal fin with many small brown blotches on rays, usually forming 2–3 distinct narrow bands. All fins yellowish to pale grey. Anal and pelvic fins hyaline in life, yellowish in preserved individuals, without blotches on rays in most individuals.

Distribution. Oxynoemacheilus isauricus   was found in tributaries of Lakes Beyşehir and Suğla in Central Anatolia.

Etymology. The species is named after the ancient name for Isauria, a region in Central Anatolia. An adjective.

Remarks. The species of the O. angorae   group are the only Oxynoemacheilus   found in the Turkish Aegean basin, the tributaries of the Bay of Antalya and in Central Anatolian endorheic basins. Only O. ciceki   from the Sultan marshes in the eastern part of Central Anatolia belongs to the O. hamwii   group (see Geiger et al. 2014). Oxynoemacheilus isauricus   is distinguished from O. ciceki   by having 8–11 roundish or vertically elongate, irregularly set and shaped midlateral blotches along the flank (vs. flank with many small rounded spots or mottled), the back with 2–3 irregularly set and shaped predorsal saddles, dissociated in some individuals into a mottled or vermiculated pattern (vs. back with 3–6 irregularly set and shaped predorsal saddles, saddles dissociated into 3–4 paired and rounded blotches in some individuals). Oxynoemacheilus atili   is very widespread in the Lake Beyşehir and Suğla basins and is known also from the Manavgat River, which drains water from Suğla Lake to the Mediterranean. We found O. isauricus   and O. atili   syntopic in the stream Çeltek but would expect that both species usually occur together. Further field-based research is needed to gain a better understanding of the distribution ranges of O. isauricus   , which was only found at two quite distant places. 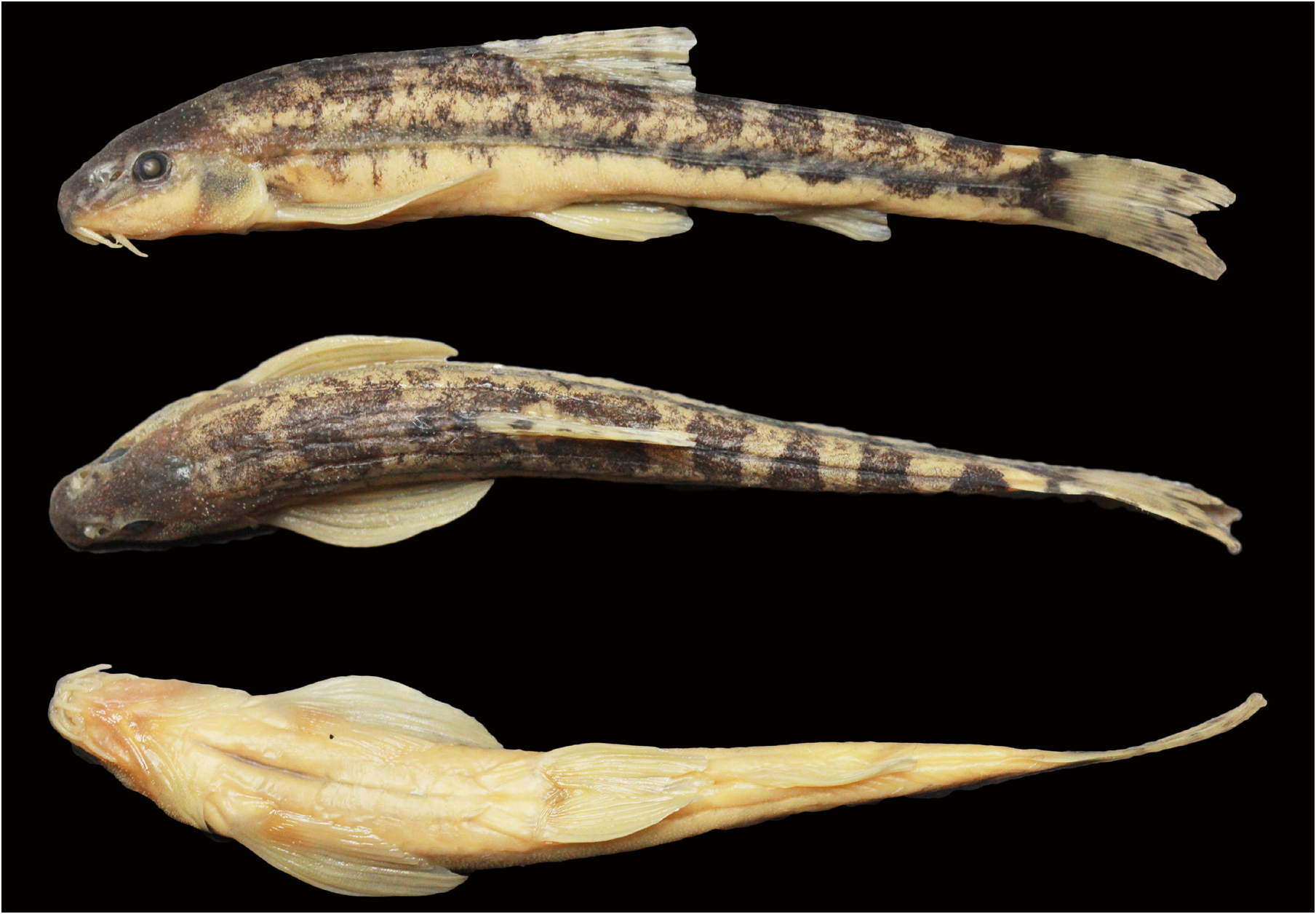