Discussion. This species is very close to A. paraimpexus   in morphology and shares mesquite ( Prosopis spp.   ) as an adult host, but is allopatrically distributed and morphologically distinct as given in the diagnosis and as discussed under A. paraimpexus   . There are two specimens in the Museum of Comparative Zoology labeled as “Cotypes” of A. addendus   . Fisher (1928:269) clearly considered Cotype 1 to be the type of A. addendus   (“Redescribed from the male cotype No. 1 in the Museum of Comparative Zoology”) although he did not formally designate it to be the lectotype. Fisher also wrote (1928: 270): “The two cotypes in the LeConte and Horn collections were both collected by Belfrage in Texas. Specimen No. 2 in the LeConte collection labeled “ addendus Cr.   Type 5079-2” is A. abjectus Horn   , and not A. addendus   .” On the preceding page Fisher (1928: 269) also says his description of the female of A. addendus   was made from “the female cotype No. H- 4737 in the Philadelphia Academy of Natural Sciences.” The Horn collection is also now at the Museum of Comparative Zoology and there are five specimens labeled H-4737 (labeled “Tex” or “S.W. Tex”), only one of which also bears the label “addendus/Cr.,” apparently in the same hand as Cotype 1, and it is a female. Although Fisher refers to these specimens as cotypes, the specimens themselves are not so labeled, and Crotch’s description gives male characters, but does not specify the number of specimens or refer to a female. Interestingly, Horn’s (1891) treatment of A. addendus   listed Texas and Arizona as the species’ range. Under “Variations,” Horn writes that “two forms may be separated in this species, those with the pubescent spots well marked and those without them. The former variety shows   some pubescence at the sides of the thorax and at the sides of the last three ventral segments.” From this it seems clear that Horn is referring to A. paraimpexus   and A. addendus   , respectively, and that he recognized both the close relationship and the consistent differences between A. addendus   and A. paraimpexus   . Interestingly, the unique male type of Fisher’s Agrilus frisoni   also has a penciled label with the number 4737 and may have come from the same series from which A. addendus   was described. It differs from A. addendus   only in the deep medial depression of the pronotum, which seems to be an individual deformity in that it is not perfectly bilaterally symmetrical. The only non-catalogue reference to A. frisoni   since its description is apparently that of MacRae and Nelson (2003) which listed distributional records without comment. Specimens in that paper probably include both A. addendus   (Tamaulipas) and A. paraimpexus   (Puebla, Sinaloa), with the Chihuahua record uncertain as to which. Males from Texas measure 4.10–6.10 mm long (mean = 5.28 mm for 27 specimens), and females measure 4.40–6.20 mm long (mean = 5.34 mm for 23 specimens). 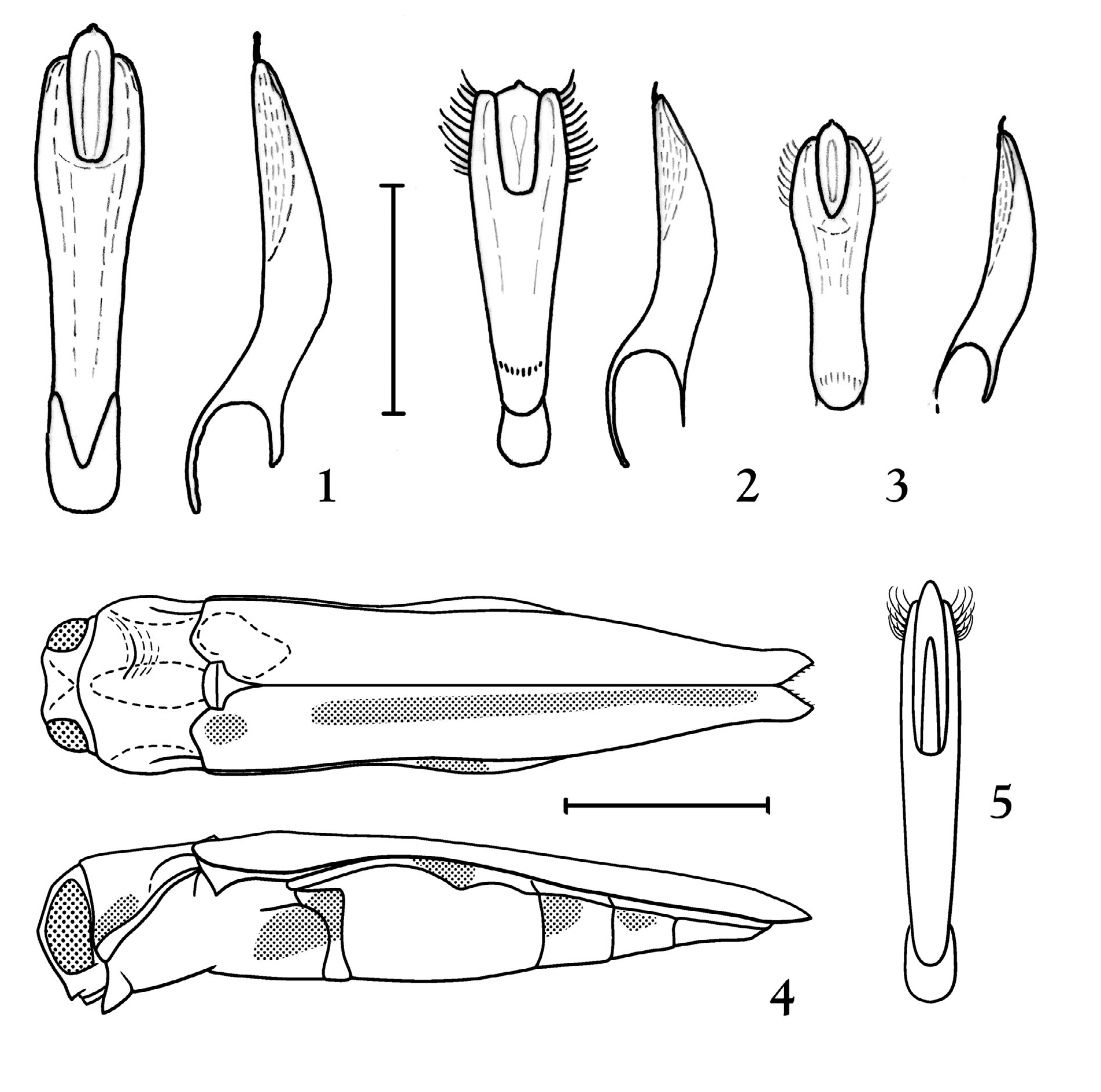