Rediagnosis: Similar to Propolyxenus argentifer  in most characters but distinguished by the arrangement and shape of tergal trichomes which are arranged in two evenly spaced transverse rows of barbate trichomes with small rosettes laterally ( Fig. 5EView FIGURE 5). Dorso-medial fan of barbate trichomes numbering fewer than 38 in total, in two distinct halves with medial gap. Number of thin basiconic sensilla on 6 th antennal article in adults always greater than three ( Fig. 5BView FIGURE 5).

Remarks: Polyxenus lagurus  has previously been identified from the Crimea ( Attems 1904) and from Gagra, Abkhazia (Issev 1911a), so it is not surprising to have identified it from the Crimean and Caucasian regions in this study. However, it is surprising that so few specimens were found. Polyxenus lagurus  is the most widespread species of the Polyxenida  having been identified throughout Europe including Great Britain, and Scandinavia and east to Israel ( Kime & Enghoff 2011). It has also spread to North America ( Condé 1996) and even to Australia ( Short and Vahtera 2017). There are both bisexual and parthenogenetic populations ( Enghoff 1978). The Crimean population is bisexual with the single specimen collected being male.

Lignau (1924) suggested that the specimens found at Gagra, Abkhazia were distinct from those from Europe and indicated this with the name P. lagurus var. caucasicus  . Differences in size and shapes of trichomes are given as the argument for distinctness from European P. lagurus  , based on comparison with figures in Humbert (1893) and Reincke (1910). However, because no magnification values or scale bar were available for the author’s figures, it is hard to ascertain the validity of the argument about size differences. The characters described for P. lagurus var. caucasicus  differ little to those from the P. lagurus  from Crimea in this study, so there seems insufficient evidence for maintaining a variety or subspecies status for the specimens described by Lignau. The one difference in Lignau’s description was that the medial posterior tergal trichomes had rows of 18–20 serrations along their length in contrast to 11–13 in P. lagurus  from Crimea and elsewhere ( Brolemann 1935). COI sequencing (together with measurements on a photograph) of a Polyxenus  specimen from Crimea suggests the presence of a second smaller Polyxenus  species in Crimea. 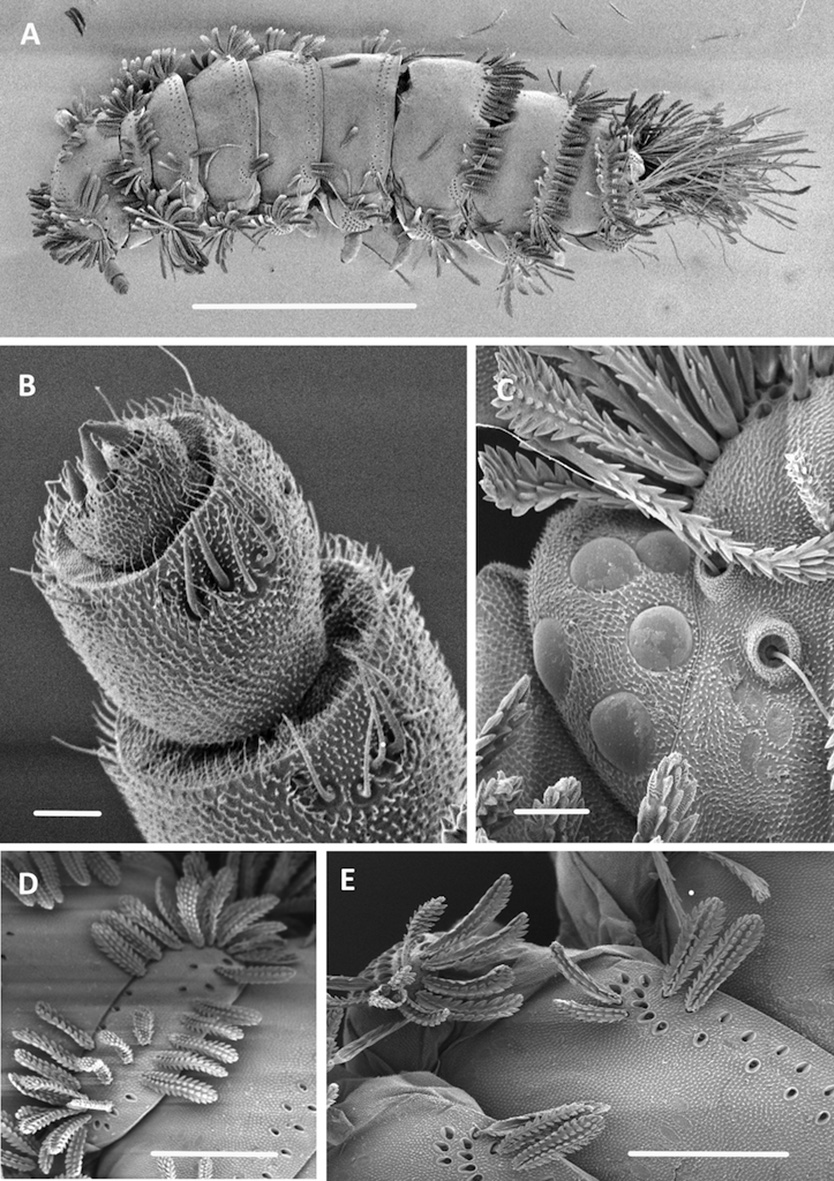