Measurements: FL 1.70-1.90 (1.80); FW 2.80-3.15 (3.01); PNL 2.05-2.25 (2.14); PNW 3.40-3.75 (3.59). Head. Disk of head posteriorly light brown, almost yellow on anterior third. Remainder of head dark brown with bright greenish blue luster. Ventral side of head dark brown. Most setae of head dark brown or almost black, not flattened. Only some setae on anterior part of clypeus brown or light brown. Mandibles and stipes of maxillae dark brown. Galea light brown. A1 and A2 yellow (or slightly reddish), A3 and A4 brown. Adnasalia distinct and not shorter than lateral teeth (Fig. 1A View Figure 1 ). Apexes of adnasalia slightly curved outside. Lateral plates (below adnasalia) shortened, its apexes almost rectangular. Tubercles between ST1 and ST2 distinct with two setae. Width of A1 1.2-1.3 × wider than A2 and 3-4 × wider than A3 and A4. Anterior lateral margin of A1 and A2 slightly flattened. A1 with six setae; A2 with five setae in upper part; A3 with two or three setae; A4 with two or three long and six or seven very short setae (Fig. 1C View Figure 1 ). Maxillae show the typical form for Cicindelini   larvae (Fig. 1B View Figure 1 ). Galea slightly shorter than maxillary palpus. LP1 with seven or eight spinelets (two or three marginal ones slightly longer). LP2 with one seta almost in the middle (Fig. 1D View Figure 1 ). Epicranial suture absent. Thorax. PN brown with light brown anterior margin. PNa light yellow, wide, rounded and directed forwards. Width of PN in 1.66-1.68 × wider than long, its maximum width in the middle. Callous elevations of PN and swellings of PNa distinct. Anterior margin of PN slightly concave in the middle and as long as or slightly shorter than tips of PNa (Fig. 2A View Figure 2 ). Setae of anterior margin and disk of PN dark brown, but lateral and posterior setae yellow or pale. Most setae long, thin and acuminate (only one or two setae on tips of PNa slightly flattened). Anterior margin of PN with 12-14 setae; PN1 with 11-13 anterior setae (without marginal setae) and swellings of PNa with two setae. First pair of legs dark brown, other pairs yellow brown. Legs typical for Cicindelina  larvae (Fig. 1E View Figure 1 ). Abdomen. Sclerotized areas of abdomen indistinct, pale yellow. T3 with 8-10 setae. HY consisting of one large posterior and one or two small anterior sclerites. Inner margins of tergites of hump almost contacting. CT5 and CTL5 fused. CTL5 with 7-9 long setae. CT5 transverse-elongated with 15-18 stout bristles and some small setae (Fig. 2C, D View Figure 2 ). Hooks of hump widened basally, their tops moderately curved downwards (in lateral view) (Fig. 2D View Figure 2 ). Length of MH 1.7-1.8 × longer than width at base. Apex of MH reach middle of AT5. Length of IH 1.25-1.30 × shorter than MH. Central spine of IH with distinctly longer lateral bristles. Spines of MH and IH are almost symmetrical and situated slightly in front of middle (Fig. 2C, D View Figure 2 ). EU9 with eight long setae (Fig. 2F View Figure 2 ). PY dorsally with eight or nine long and two or three shorter setae, ventrally with 10-12 small setae (Fig. 2E, F View Figure 2 ). Top of PY with 16 or 17 dorsally stout setae.

Measurements: FL 1.17-1.19; FW 2.00-2.20; PNL 1.35-1.40; PNW 2.05-2.08. Differing from instar III mainly by number of setae on some appendages and sclerites. Head. Coloration of head and pronotum same as in instar III but less bright. Most setae on head transparently white and only brown near eyes; A1 with five setae (three on anterior lateral margin). A2 apically with five long setae; A3 with two long, and A4 with two or three long and 4-6 small setae. Galea slightly shorter than maxillary palpus. LP1 with six spinelets, LP2 with one seta slightly before the middle. Epicranial suture absent.

Thorax. PN 1.48-1.52 × wider than long. Anterior margin of PN almost even or slightly concave. Most setae of PN1 slightly flattened and truncated (in instar III: thin and acuminate). Anterior margin of PN with 24-27, PN1 with 8-11 and swellings of PNa with one or two setae. Abdomen Sclerotized areas of abdomen indistinct. T3 with 8-10 setae, HY consisting of one large posterior and one small anterior sclerite. CTL5 with four long setae. Anterior part of CT5 with 12-16 stout bristles and some thin setae. Central spine of IH longer than lateral bristles. EU9 with six long setae. PY with 8-10 setae dorsally and six or seven setae ventrally. Apex of PY with 16 setae (8-10 of them stouter).

Dromica kolbei   is distributed in northern South Africa and in southern Zimbabwe. The single record from Angola still needs to be confirmed ( Cassola 2002). This species inhabits dry savanna areas with scattered trees and bushes and open forests on sandy soil.

The first copulation could be observed during the second day and took only a few minutes, just as all the subsequent copulations. After a few days, the female refused further mating activities by the male. Even if the male’s mandibles successfully gripped the female between the thorax and the elytra (the coupling sulcus being marked by a longitudinal shallow impression on the upper half of the mesepisternum), the male did not succeed in inserting its fully protruding aedeagus. By arrhythmic waggling of the abdomen, the female tried to get rid of the male. Zikan (1929) observed a similar behavior in other genera of Cicindelidae   .

While mating, the male spread out the prolegs, tightly holding the female with its mandibles. The male’s labial palpi, with second palpomeres inflated, flattened and with rows of long setae on the upper surface, were folded backwards and pressed onto the female’s elytra. The use of the male’s dilated protarsi, bearing brush-like adhesive hairs, could not be observed.

Egg laying only took place immediately after watering the substrate. Initially, the female tested the substrate by touching the surface with its palpi, lowering its head while walking slowly. After the female made a small hole by digging with its abdomen, most probably by using its cerci as tools. The abdomen was placed into this hole up to the penultimate tergite, while the ovipositor was extended for ca. 8-10 mm for egg laying.

The first eggs were laid on 6 March. The egg-laying period lasted until the female’s death on 9 June 2000 (95 days later). During this period, the female dug ca. 150 holes. When the female was disturbed by the male, she stopped laying eggs and moved to another area; therefore many holes did not contain any eggs. Furthermore, no larvae left the burrows that had been dug at the end of the egg-laying period.

After hatching, the coiled larvae remained in a small cavity for a few days before digging a circular tunnel to the substrate surface. During the 1st larval instar, the opening of this tunnel was simply rounded. In front of the oblique tunnel opening, the 2nd and 3rd instar dug a transverse cavity, which was larger for the 3rd instar. Sometimes, the tunnel opening was located at the hollowed lateral wall instead of its top. Approximately seventy larvae hatched from eggs and ca. 40 larvae reached the 3rd larval instar (fifteen larvae were killed and added to the second author´s collection). The first larvae could be observed 33 days after the beginning of the egg-laying period. The shortest period between the first instar I larva and the appearance of the instar II larva numbered 21 days while there were 49 days between the first appearance of an instar II larva and the appearance of the instar III larva. After several months, all the instar sizes could be found. In January 2001, seven months after the last eggs had been laid, one specimen of instar I appeared at the surface. In January 2003, the last living instar I larva of the first generation was dug out, 31 months after the last eggs had been laid.

The first pupa was discovered at the beginning of August 2001. The position of the pupa was vertical in a simple cave ca. 1 cm underneath the surface. The first imago of the first generation appeared in September 2001. Several pupae were dug up and placed in a humid box. The hatching of one male was observed: it took ca. 10 hours from the beginning until the elytra were fully developed and another two days for the full coloration to develop. This specimen lived from 31 August to 28 October 2001.

One female was dug up fully developed on the 31 of August. This female started with egg laying 7 weeks later, on 19 October but died on 2 February, after having lived for 5 months. Two eggs with fully developed larvae inside and belonging to the F2 generation were dug up on 6 February. The F2 generation egg mortality was very high, although dozens of eggs were laid, not a single larva hatched. 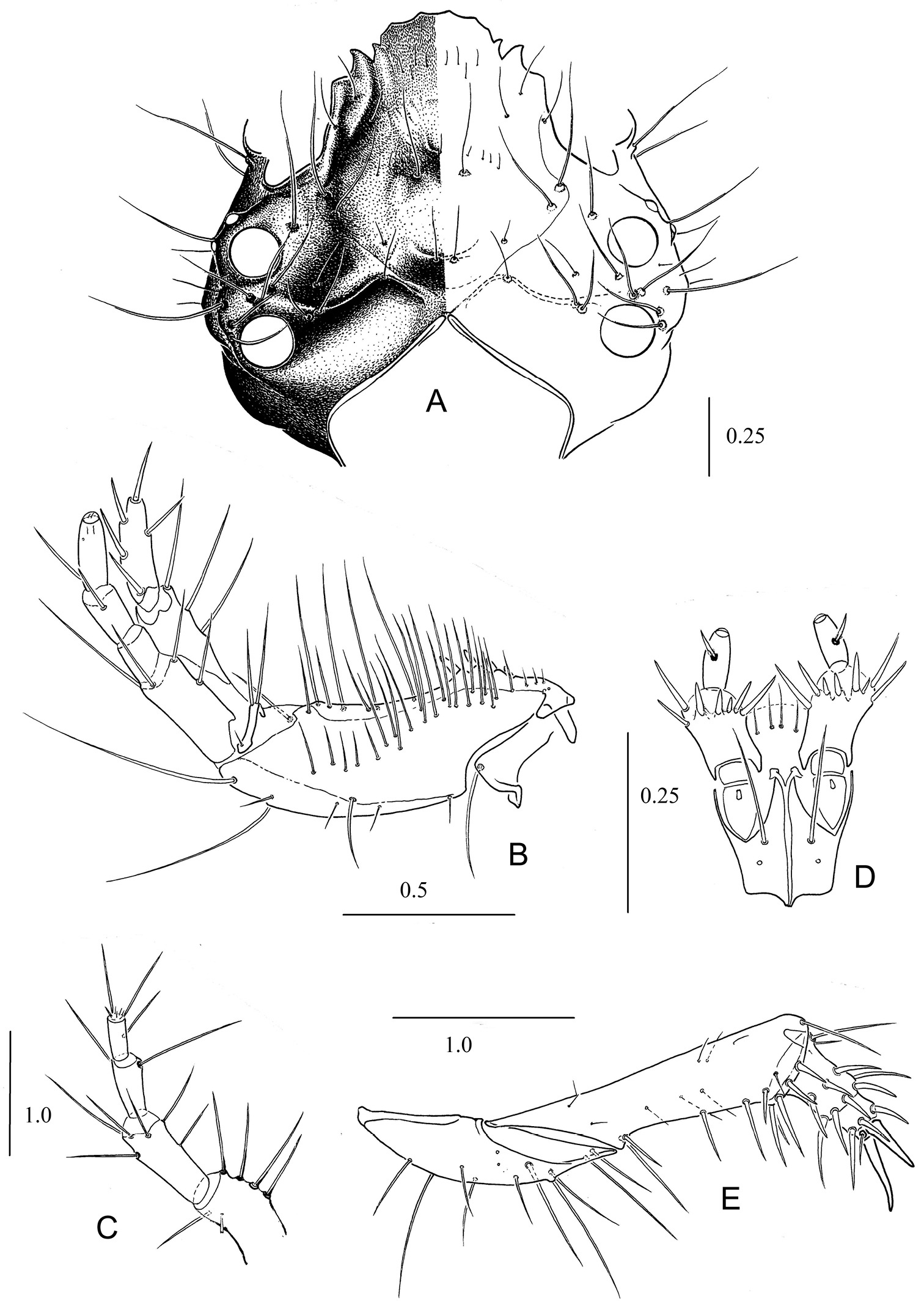 Figure 1. Head and appendages of Dromica kolbei, III instar A head (above) B left maxilla (above) C left antenna (above) D labium (below) E first right leg (below).

Figure 1. Head and appendages of Dromica kolbei, III instar A head (above) B left maxilla (above) C left antenna (above) D labium (below) E first right leg (below). 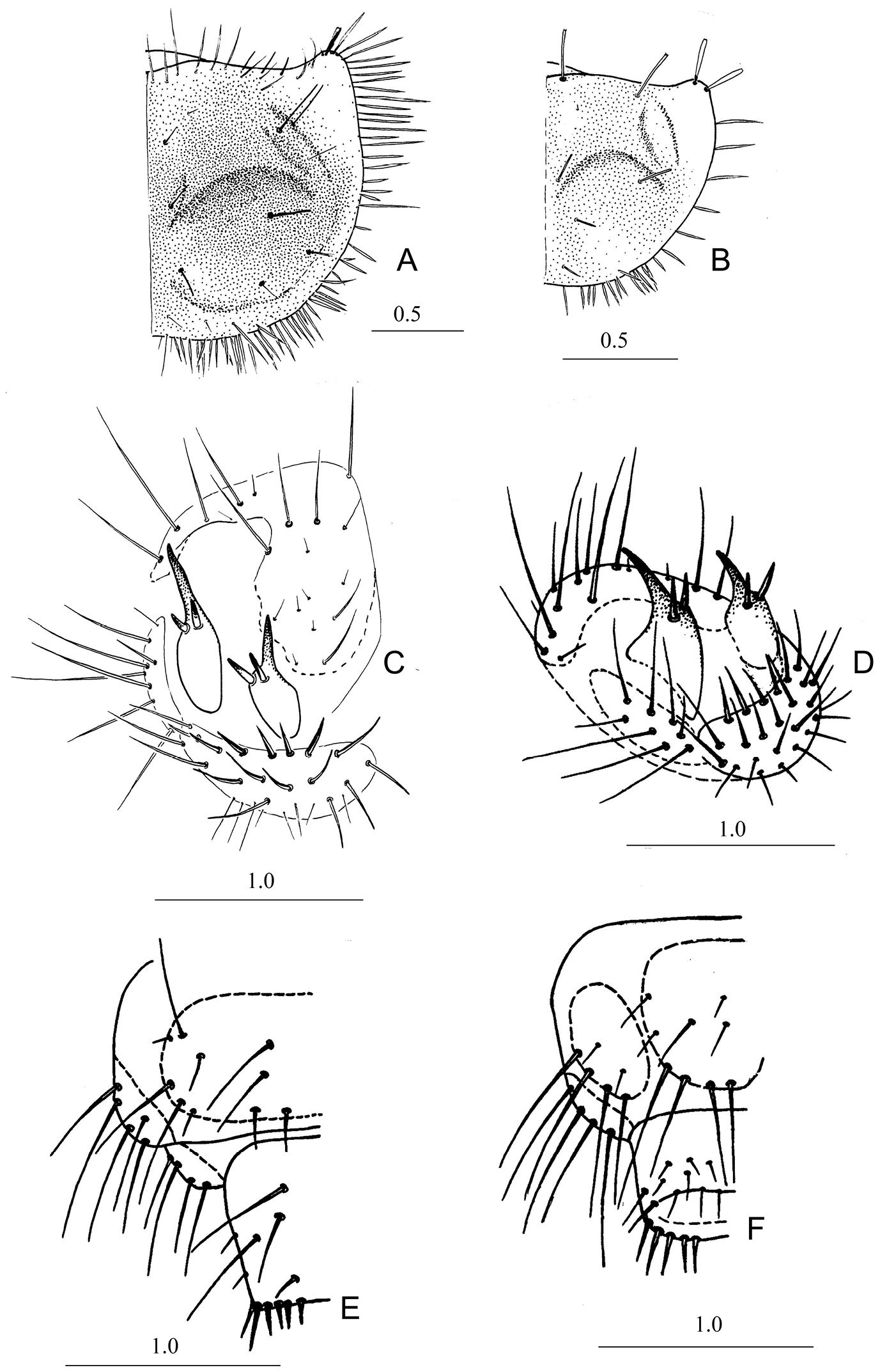 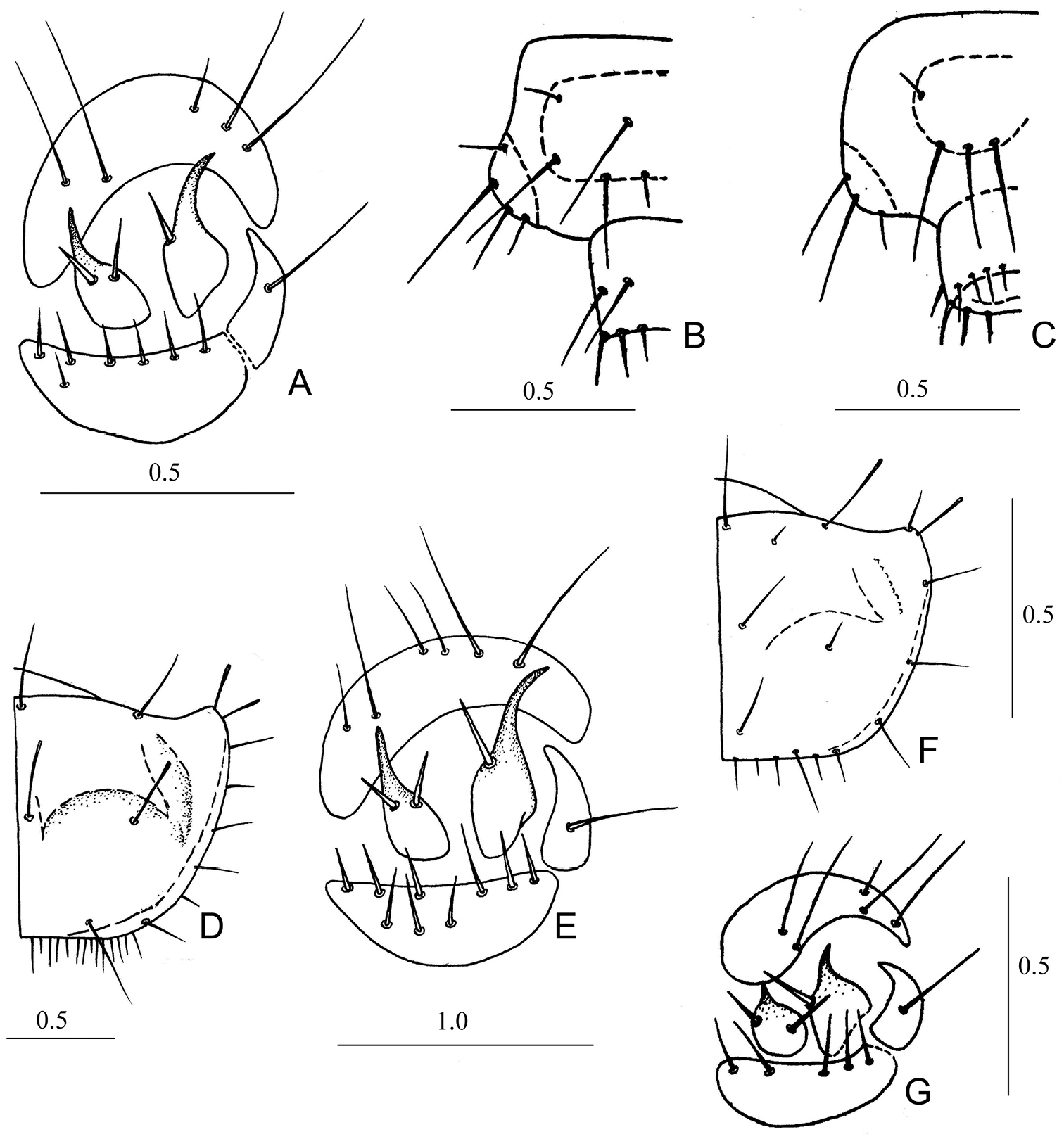