Margin. Marginal setae in a single line, of two sizes, both lanceolate and spinose, with rather blunt apices and narrow basal sockets: (i) shorter 16–20 µm long, with 51–63 on each side between stigmatic clefts, and (ii) larger setae, similar in shape to (i) but each 30–45 µm long, located at ends of each reticulation line, with 8 between stigmatic areas anteriorly; three on each side between stigmatic areas and seven on each abdominal margin; marginal setae extending only a short distance up anal cleft margin. Stigmatic areas without stigmatic sclerotisations and without a cleft, each area with a single rather blunt spine, generally slightly curved, with broad basal sockets; each 50–60 µm long. Eyespot present on margin, each about 8–10 µm long.

Venter. Derm membranous. Pregenital disc-pores each about 8 µm wide with mainly 10 loculi; in bands across all abdominal segments but most abundant posteriorly; each band with a mediolateral group; with none laterad to metacoxae. Spiracular disc-pores each about 4–5 µm wide with mainly 5 loculi, in bands 1–4 pores wide; with 25– 42 in each band; with a few extending medially over each peritreme. Ventral microducts of one size, each about 1.5 µm wide, in a sparse submarginal band and in a dense group posterior to mouthparts. With 0–2 preantennal pores just anterior to each antenna. Ventral tubular ducts of two types as for genus: (i) shorter duct with outer ductule 15– 17 µm long and with a fine inner ductule 11–14 µm long, frequent on either side of anal cleft and across all abdominal segments in a line or band anterior to multilocular disc-pores, but very sparse or absent medially, and (ii) longer ducts, each with outer ductule about 25 µm long and inner ductule 8 µm long, in a broad submarginal band, extending medially to spiracles and also a few present between clypeolabral shield and antennae. Ventral setae: ventral anal lobe setae 15–25 µm long; with one pair of anterior anal cleft setae; with long pregenital setae restricted to pairs medially on abdominal segments VI and VII; short setae medially on each abdominal segment few; with 2 or 3 minute setae near each coxa but with one longer seta near each procoxa; with 3 pairs of interantennal setae, posteriormost setae unusually long; with 1–3 submarginal setae on each side between stigmatic areas. Antennae 8 -segmented, with distinct segmentation between segments III and IV, and between IV and V; total length 500–550 µm; length of apical setae 80–90 µm; fleshy seta on each antenna particularly long. Length of clypeolabral shield 165–170 µm. Width of spiracular peritremes: anterior 50–60 µm, posterior 58–70 µm. Legs elongate, with a separate tibia and tarsus, but no tibio-tarsal articulatory sclerosis; distribution of leg setae as for family; claws with a minute denticle; claw digitules similar and broad; tarsal digitules dissimilar, one shorter and narrower than other; tarsal campaniform pores absent; lengths (metathoracic): coxa 160–175 µm, trochanter + femur 225–240 µm, tibia 165–175 µm, tarsus 100–110 µm, claw 20–23 µm.

Notes. Although the exact layout of the reticulation lines on the mounted specimens was hard to determine, the presence of 14 larger marginal setae on each side clearly suggests that there are a total of 29 marginal waxy plates. The small size of the pores and their sparseness made delineation of the other rows of reticulation plates difficult but the photographs strongly suggest that there are three pairs in addition to the central line. These are not shown in the figure.

Thorax. No setae located. With 12–15 spiracular disc-pores associated with each anterior spiracle, distributed anteriorly and laterad to peritreme, extending medially full length of spiracular apodeme; with 1 disc-pore just anterior to each posterior spiracle; shape and number of loculi in each disc-pore highly variable. Spiracles: width of peritremes 25 µm. Legs each with a small triangular finger on apex, probably an incipient claw; length of metathoracic legs 950 µm. With a pair of long wing-buds on each side, extending to about abdominal segment III, mildly sclerotised: length 725 µm, width 225 µm (ratio length to width 1: 0.32).

Abdomen. Segmentation fairly distinct, anteriormost segment considered to represent segment II (see Hodgson & Henderson, 2000, p. 54), so that there are seven visible segments (segments II to VIII) anterior to penial sheath. With 2 ante-anal setae dorsally on segment VIII; with 1 pair of small ventral setae on segments II –VII; dorsopleural setae: 1 pair on segments V –VIII; 0 or 1 small ventropleural seta on segments V –VII. Lateral lobe of VII rather pointed, each about half length of penial sheath, each with a long apical seta (45 µm long) and two shorter setae laterally. Segment VIII with a pair of prominent, mildly sclerotised lobes dorsally on either side of penial sheath, each with 2 stout setae. Penial sheath longer than lateral lobes of segment VII and a little longer than wide (165 µm long, 125 µm wide at base; ratio length to width 1: 0.75); with a pair of minute setae on dorsal surface and numerous small pores on apex.

Notes: The pupae of Kalasiris   species are rather similar to those of Aphenochiton   , Crystallotesta   (fagi -group), Ctenochiton   and Umbonichiton   from which it is difficult to separate them. The pupae of Kalasiris   share the following characters: (i) body moderate to quite large in size; (ii) spiracular disc-pores associated with each anterior spiracle mainly in a group dorsad and laterad to peritreme, none extending mesad to inner margin of spiracular peritreme; (iii) with or without disc-pores associated with each posterior spiracle but, when present, few; (iv) lobes on abdominal segment VII well developed; (v) lobes of abdominal segment VIII moderately large and obvious, with 1 or more setae; (vi) ante-anal setae present, and (vii) the segmental arrangement of the dorsopleural setae. 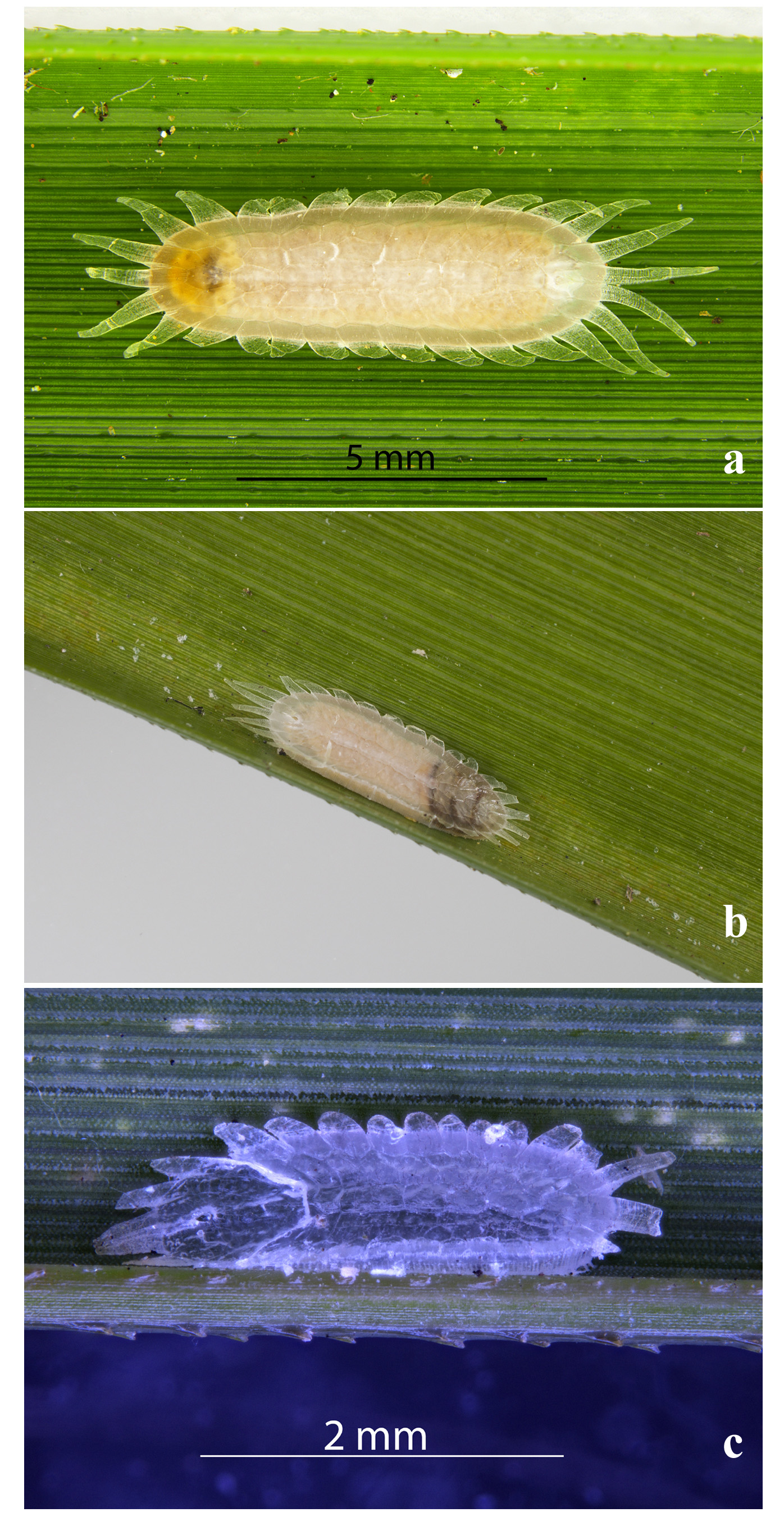 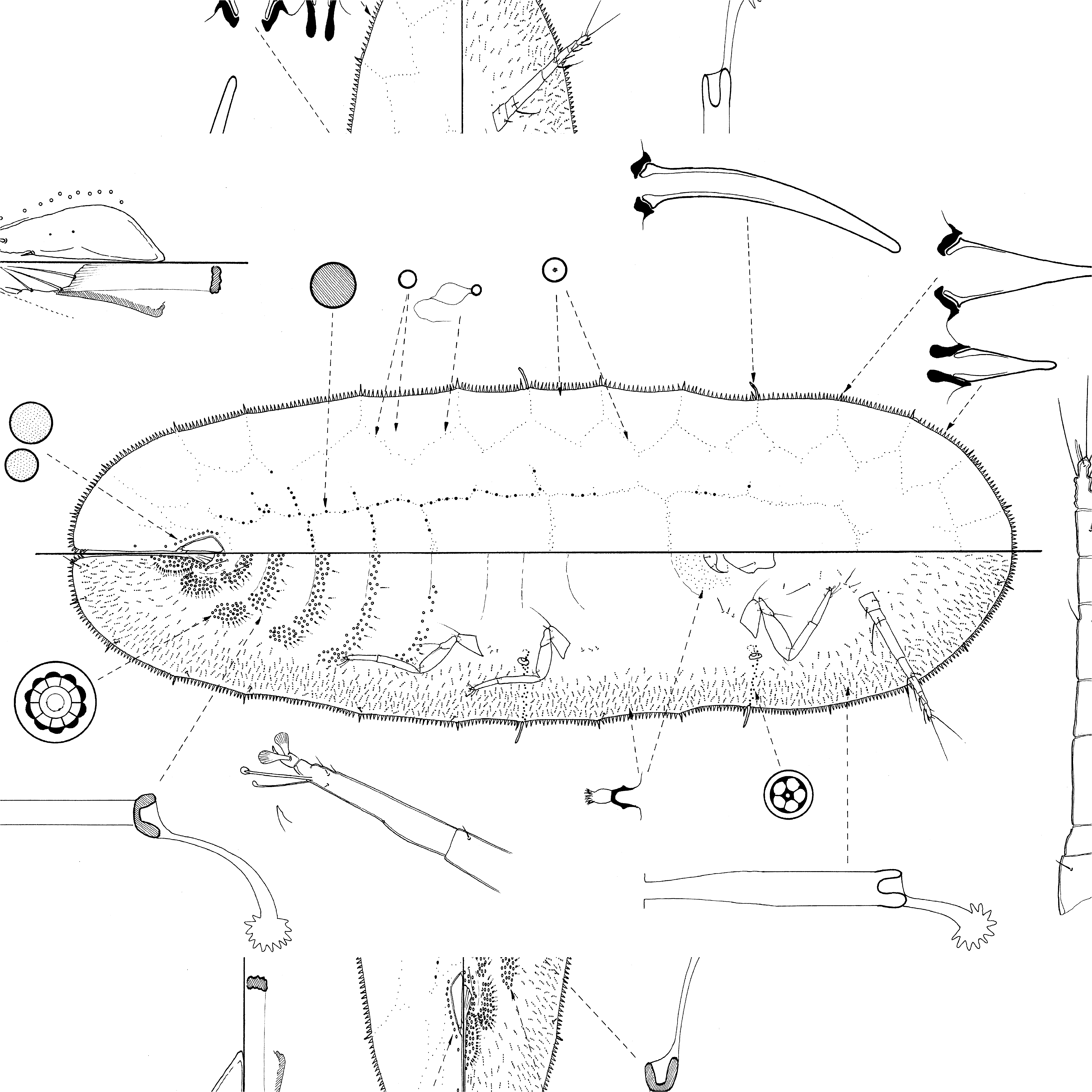 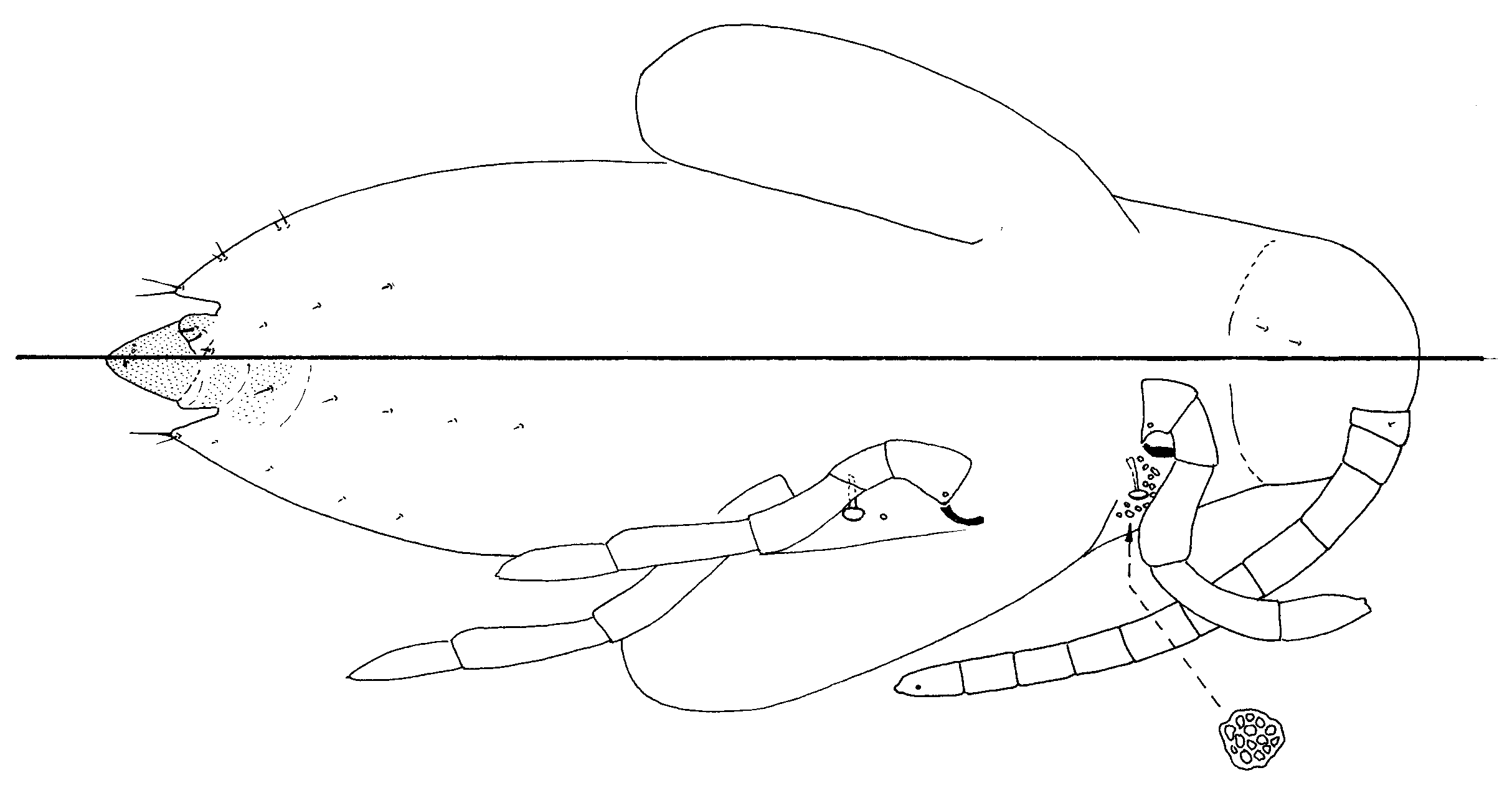