Diagnosis. Phoberus lilianae   is most similar to P. ntlenyanae   new species in appearance, but can be distinguished from the latter by the smaller, evenly spaced, dull round tubercles on the even-numbered costae of the elytra. Phoberus ntlenyanae   new species has larger, shiny tubercles, which are irregularly spaced. The overall appearance of these species also differs noticeably: P. lilianae   is dull, whereas P. ntlenyanae   new species has a characteristic shiny reflection. Phoberus lilianae   also bears some resemblance to the montane members of the P. nigrociliatus   species group which have similar elytral markings and a similar overall appearance, but can be separated on the basis of their different pronota and elytra, different male genitalia, and by their distribution ranges (see Strümpher & Scholtz 2017 for a detailed treatment of the P. nigrociliatus   species group).

Distribution and habitat. Phoberus lilianae   shows a disjunct montane distribution, being restricted to the Eastern Highlands of Zimbabwe and the north-eastern escarpment of South Africa ( Fig. 19 View FIGURE 19 ).

Comments. The holotype, which is deposited in the National Museum, Bulawayo, Zimbabwe (NMBZ; Scholtz 1980: 96), could not be studied, but P. lilianae   is a well-defined species and the five paratypes housed in the SAMC and TMSA collections were sufficient for accurate comparison. Scholtz (1983) recorded new distribution records for P. lilianae   (then regarded as a subspecies of Trox caffer   ) from Mariepskop in South Africa [24°32’S 30°53’E] and the Nyika Plateau in northern Malawi [10°48’S 33°48’E]. After re-examination of these specimens, it was found that only the one (female) specimen recorded from Mariepskop belongs to the P. caffer   species group. The specimens recorded from the Nyika plateau clearly belong to the East African P. nigrociliatus   species group (see Strümpher & Scholtz 2017). The P. lilianae   series comprises specimens collected from two different mountain ranges, the Inyanga Highlands (eastern Zimbabwe) and Drakensberg Range (eastern escarpment of South Africa) ( Fig. 19 View FIGURE 19 ). The different mountain populations may be isolated to such an extent that they may well represent genetically divergent lineages, but this requires further investigation. 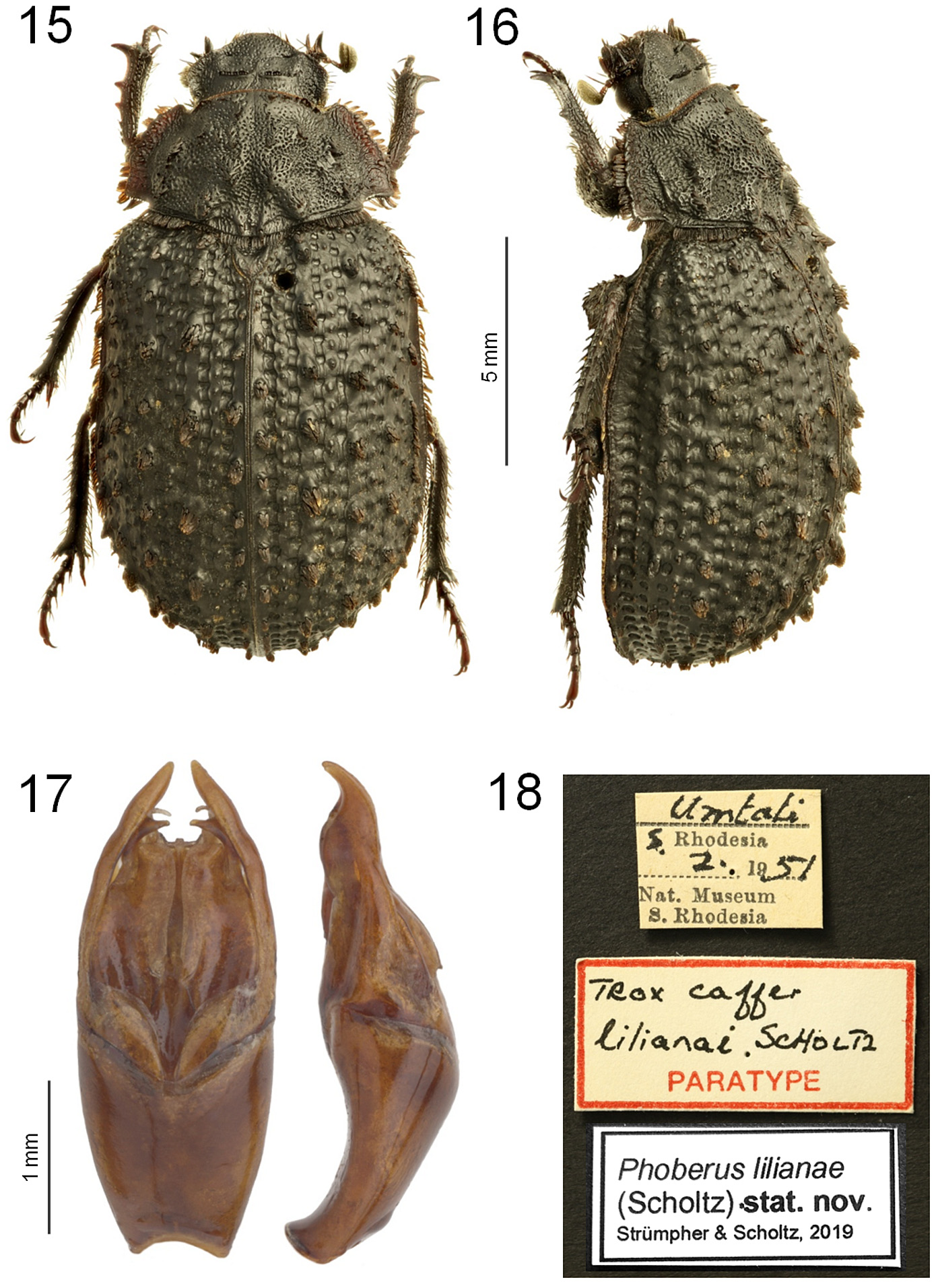