Remarks. Colour patterns of this species may vary depending on the temperature during pupation ( van Veen 2004). E. corollae  has all the setulae of the frons black and the ocellae situated on a black background. Scutellar setulae are yellow in the male. Male genital segments are remarkably large and conspicuous. In the female the area between the antennae and ocellar triangle is black for about the rear one-quarter to one-third, the rest being yellow. Abdominal spots reach the side margins at least narrowly anteriorly. A comprehensive review of the biology of this species is provided by Gilbert (1986); Barkemever (1994). The larvae of E. corollae  feed on aphids on various low growing plants, especially Fabaceae ( Ball & Morris 2000)  . The male is able to mate immediately after emergence and mating may last several hours. Females of E. corollae  are attracted to odours from aphid honeydew and the aphid (not the plant) which provide the dominant stimulus to lay the eggs ( Budenberg & Powell 1992). They visit a wide range of flowers in order to collect pollen for protein and nectar for energy (Buck De 1990). Pineda & Marcos-García (2008) found syrphid larvae preying on aphids on sweet pepper plants in Spain. They found that 98% percent of the larvae collected from the infested plants were E. corollae  . This species has been used experimentally in glasshouses as method of aphid control ( Rojo et al. 2004). In Europe this species is known to migrate in huge numbers over the Alps ( Aubert et al. 1976). Examination of material of E. corollae  in our collection and NMWC shows a great deal of variation in the extent of basal black markings of femora, ranging from hardly more than femoral depth to quite half length of femur. In the Riyadh specimen (a male) having completely yellow femora the measurements from infront of face at widest part as to eye is in ratio of 31: 20, which fits E. corollae  rather than E. nuba  . Furthermore, examination of the male genitalia from beneath shows the large surstyli extending forward almost to the margin of sternite 4 (as in the figure given in the key of Stubbs & Falk 2002: 92). E. corollae  males have genitalia much larger than those of other Eupeodes  species (A. Ricarte, pers. comm.). 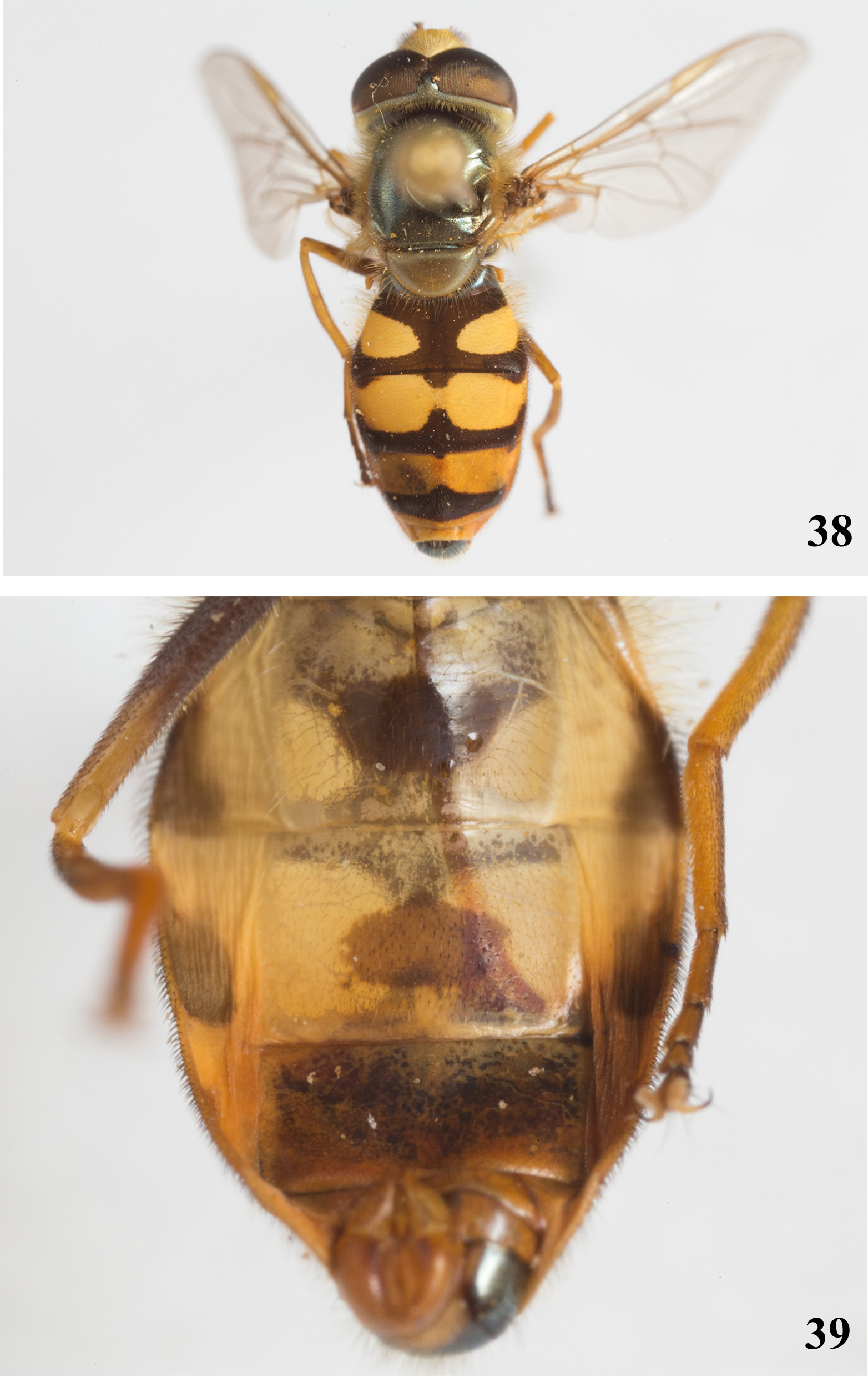