Diagnosis. As for H. pyramidum   sp. nov., described above, from which it can easily be distinguished by its smaller size (6 mm for an apparently mature female vs almost 9 mm for an apparently subadult female), the posterior combs of the nota (but not the urotergites) which each consist of a larger macrochaeta and a sizable, but smaller, submarginal insertion (compared to just a single macrochaeta), the location of the anterior trichobothrial areas of the meso- and metanota about ¾ the distance along the margins (versus 5/6), the smaller number of combs of two macrochaetae on the lateral margins of the meso- and metanota (three and two versus two and one respectively), the shorter wider legs (e.g., femur PII L/ W 1.8 versus 2.4 and tarsi PIII L/ W 6.1 versus 9.2), the presence of 3+3 combs on urotergite I (versus 2+2) and the smaller number of divisions in the ovipositor (circa 37 versus circa 45).

This species may however eventually prove to be a synonym of H. rouxi Silvestri, 1915   for which the original description is inadequate.

Appearance: Small to medium sized silverfish, thorax about 7% wider than abdomen which only tapers slightly posteriorly from about the fifth abdominal segment ( Fig. 127 View Figures 127–136 ); appearance when live unknown.

Scales: Quite broad, brown with numerous subparallel ribs that do not surpass the margin of the scale ( Fig. 128 View Figures 127–136 ). Scales found on top of head; scales absent from clypeus and labrum as well as all cephalic appendages; dark scales present on all nota and abdominal tergites, clear scales on all thoracic and abdominal sterna, and coxae of legs, absent from styli. Lanceolate scales present on all femora and tibia; other leg articles without scales; lanceolate scales not unambiguously observed on basal third of the terminal filaments.

Head: Wider than long ( Fig. 129 View Figures 127–136 ), without distinct bushes. Anterior margin without macrochaetae except for two or three tiny setae in the middle; strong macrochaetae along lateral margins with peri-antennal groups of two or three larger macrochaetae as well as some cilia, only weakly connected with the one to two rows of macrochaetae along the margin, the marginal macrochaetae continue along the sides of the head behind the antennae with a line of four or five macrochaetae lying above the eyes. Clypeus with some longer macrochaetae in 1+1 rows of about three macrochaetae laterally and close to the frons as well as numerous setae across the face; lanceolate scales not observed. Labrum with many setae across the middle of the face a line of six thinner setae anteriorly. — Scape ( Fig. 130 View Figures 127–136 ) quite short with a subdistal line of setae and smaller setae over the dorsal anterior face, pedicel short, also with a subapical rosette of small macrochaetae with a few setae scattered over the surface medially; first annulus of flagellum with a subapical rosette of fine setae, subsequent annuli with a single rosette of setae, the divisions between the annuli difficult to discern in the slide mounted material, the intervals split into two annuli by the 7–9th interval. Most distal surviving intervals ( Fig. 131 View Figures 127–136 ) divided into repeated patterns of four or possibly eight annuli, the basal interval with a single rosette of small fine setae, the second and third with two similar rosettes, the ultimate article of each interval with two rosettes of small setae and a further subapical rosette of fine, curved-tipped setae and one or two basiconic sensilla (type B). Trichobothria were rarely observed in the most apical rosettes of each interval making it difficult to determine the number of annuli per interval. — Mandibles ( Fig. 132 View Figures 127–136 ) aligned on slide so that the molar areas of both mandibles are difficult to discern but appear to be typical for Heterolepismatinae   with well-developed molar and incisor areas; a group of about seven strong and short plus four thinner, apically bifurcated setae distally adjacent to the molar region and a bush of about 60 macrochaetae externally. — Maxilla ( Figs 133, 134 View Figures 127–136 ) with three apically bifurcate macrochaetae externally proximal to the palp; lacinia short with three strong teeth, one set further back than the other two, followed by about seven lamellate processes and a row of eight setae, galea with short fine setulae as well as two or three setae basally; apical article of maxillary palp ( Fig. 135 View Figures 127–136 ) only 2.9 times longer than wide (range 2.1–4.0) and 1.3 times longer than the penultimate article (range 1.1–1.5), the ultimate article with three branched papillae, other specialised sensilla (e.g., basiconic sensilla) not seen, last two articles of palp with fine setae only, two basal articles with subapical rosettes of thicker setae, third article also with rosette but setae not as thick as those on two basal articles. — Labium ( Fig. 136 View Figures 127–136 ) much wider than long, postmentum with fine setae along the lateral margins and longer slightly strong thin simple setae scattered in band across entire width anteriorly, prementum with transverse and oblique groups of strong simple setae and with short setulae distally; apical article of labial palp, about as wide as long (range L/ W 0.95 –1.12), covered with numerous fine short setae, with five papillae of the compact type arranged in a three plus two cluster arrangement, the distal three arranged in a curved line, a small single basiconic sensillum (type C) on the outer margin proximal to the level of the papillae; penultimate article with some longer but not much stronger setae on the bulge medially; second article also with similar setae; basal article with smaller setae only.

Presternum with transverse row of setae and cilia across the entire width, the middle region with strong macrochaetae ( Fig. 144 View Figures 137–145 ). All thoracic sterna with hyaline round scales. — Prothoracic sternum ( Fig. 144 View Figures 137–145 ) cordiform with distinct concave margins in distal half as well as being longitudinally slightly concave, slightly wider than long (L/ W 0.86), 1+1 irregular combs of six bifurcate macrochaetae running subparallel to the margin, as well as some marginal setae and cilia in distal three quarters. — Mesosternum ( Figs 146 View Figures 146–161 ) sub-parabolic as long as wide at its base, (L/ W 1.03) with about six macrochaetae forming an irregular submarginal row along the posterior quarter of the margin, short straight posterior margin between combs. — Metasternum ( Fig. 147 View Figures 146–161 ) wider than long (L/ W 0.80), apically round, 1+1 apical combs of five or six macrochaetae, the distance between the combs two to three times the average length of each comb (range 2.2–3.0), lateral margins with a few simple setae and cilia only adjacent to the combs.

Coxite IX of ♀ ( Fig. 163 View Figures 162–168 ) with apically acute internal process, about four times longer than the external process in the adult and 1.5 times as long as wide at its base, reaching to about one quarter length of the stylus; external and internal margins of internal with a few moderately strong setae, apex of round outer process with three or four strong setae. — Ovipositor appears fully developed surpassing the end of the stylus by about the length of the stylus (1.9 HW), composed of about 37 divisions. Distal divisions of gonapophyses ( Fig. 164 View Figures 162–168 ) with only short fine setae and setulae.

Cerci ( Fig. 165 View Figures 162–168 ) with basal divisions wider than long, divisions two to four with a single rosette of setae cilia and some trichobothria, fifth and sixth divisions each with two rosettes, the basal rosette of finer setae and trichobothria, following divisions consisting of three then four rosettes; most distal surviving divisions (probably only one third the length of the cercus) composed of four annuli each with two rosettes of setae, with large macrochaetae restricted to the most distal rosette. — Median dorsal appendage ( Fig. 166 View Figures 162–168 ) not well preserved; only about seven divisions remaining, most setae quite long and thin, macrochaetae restricted to the most distal rosette of each division. Lanceolate scales not observed on the terminal filaments.

Male: Based on specimen K.261310 which may be subadult: As for female but styli present only on segments VIII and IX, coxites IX ( Fig. 167 View Figures 162–168 ) with acute inner process about as long as wide at its base (range 0.95–1.04) and 1.8–2.7 times longer than the external process, reaching to just under half the length of the stylus; both processes also with several strong setae mostly apically emerging from both the dorsal and ventral surfaces of the processes close to or on the margin. Parameres a little shorter than wide, with only about ten short fine setae ( Figs 167, 168 View Figures 162–168 ). Penis typical for genus with numerous glandular setae apically, each set on a protuberance.

Habitat. The specimens were collected from both low coral cays that form the Herald Group. The specimen from NE Cay (K.377828) was extracted from Abutilon   [fam. Malvaceae   ] leaf litter using a Tullgren funnel. The specimens from the SW Cay were labelled “HC S bark”.

Etymology. The species named heraldense   referring to the type locality.

Silvestri’s 1915 description of the New Caledonian species H. rouxi   , while diagnostically useful at the time it was written, is today inadequate. It lacks not only higher level details such as the chaetotaxy of the anterior margin of the frons and the presence or absence of lanceolate scales but also many smaller details such as the number of divisions in the ovipositor and the chaetotaxy of the lateral margins of the nota which could well reveal differences. Heterolepisma heraldense   sp. nov. may eventually prove to be conspecific with H. rouxi   although the illustrated urotergite X in the latter appears more rounded in the male. New Caledonia is some 1600 km south east of the Herald Cays. 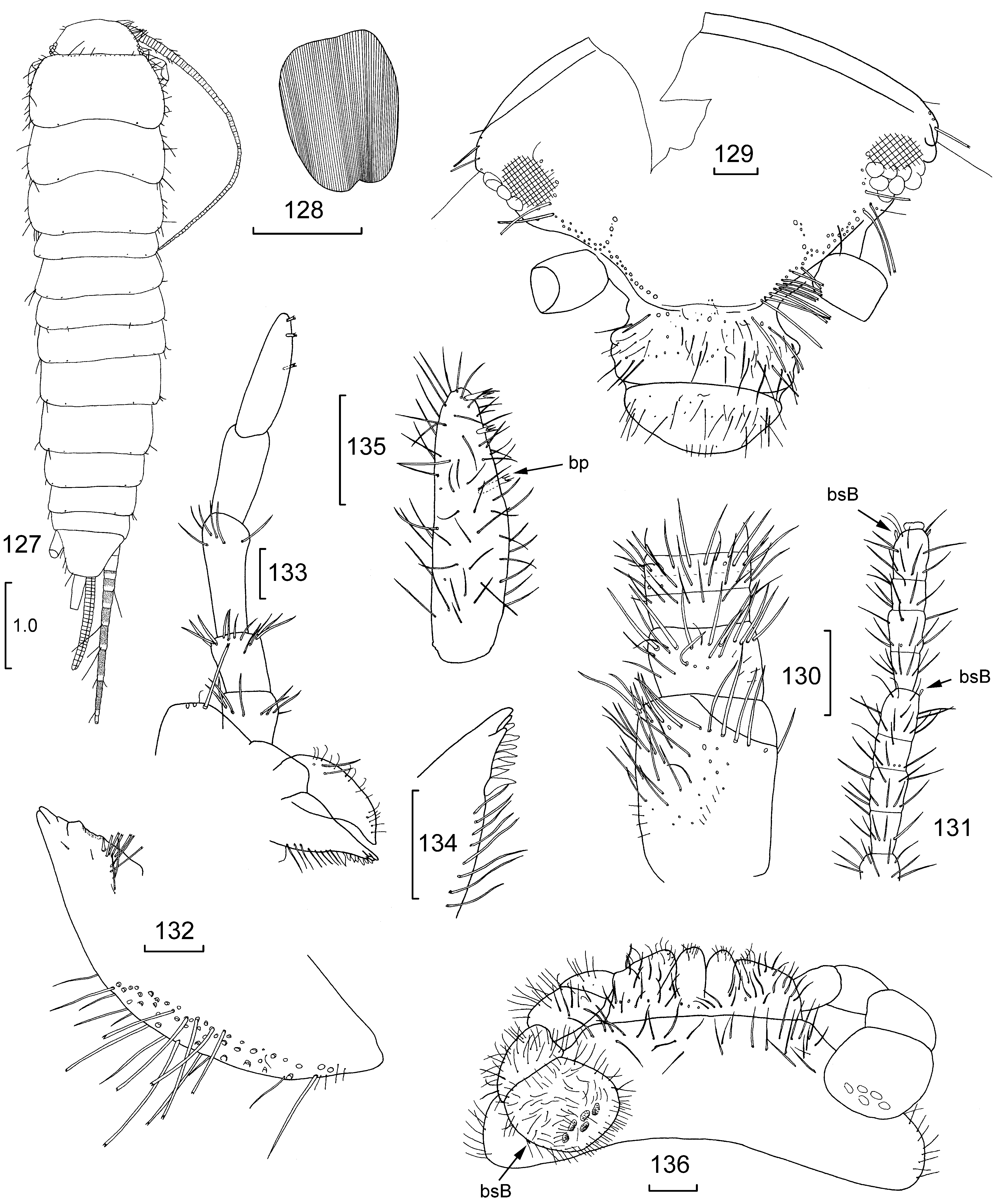 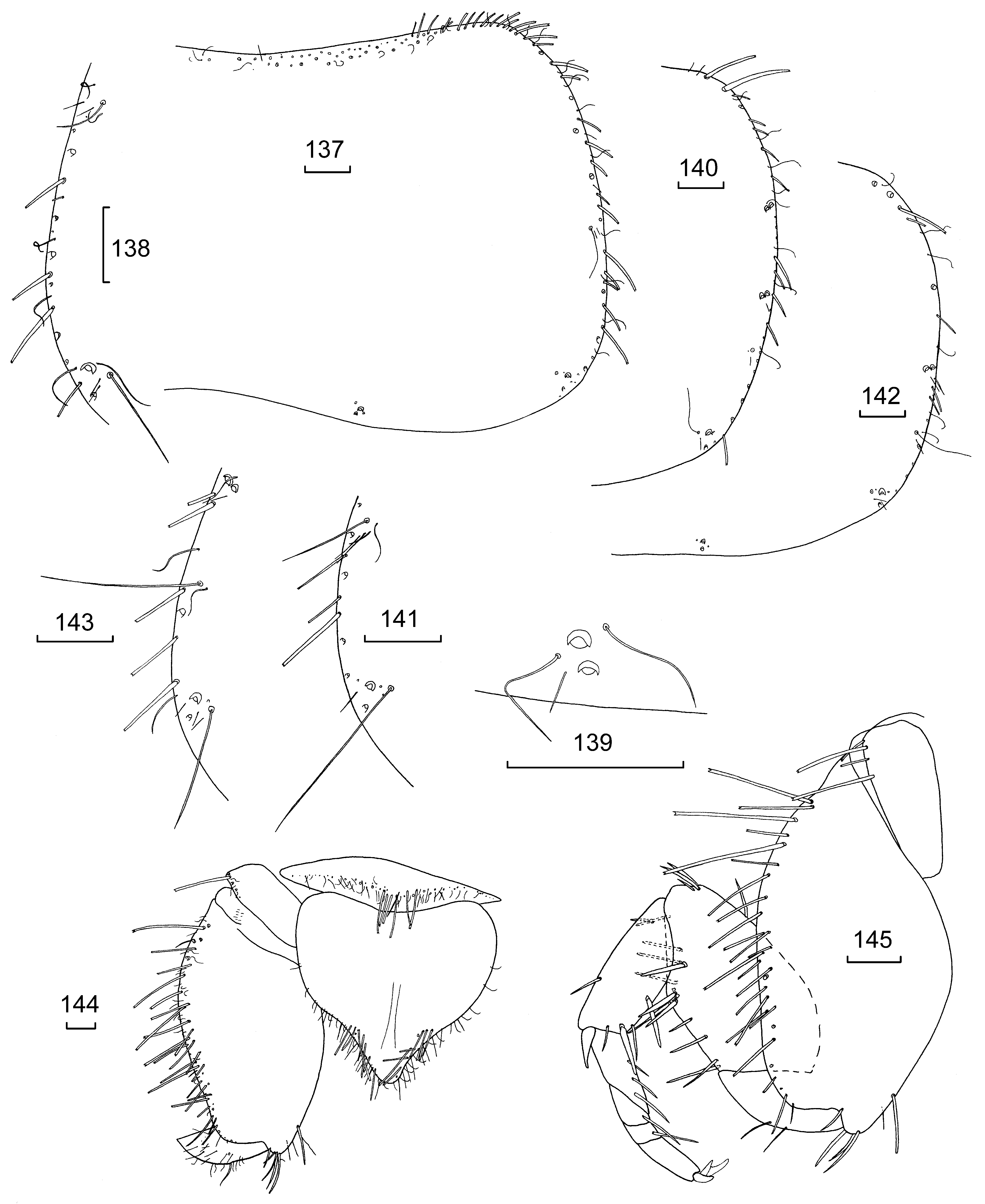 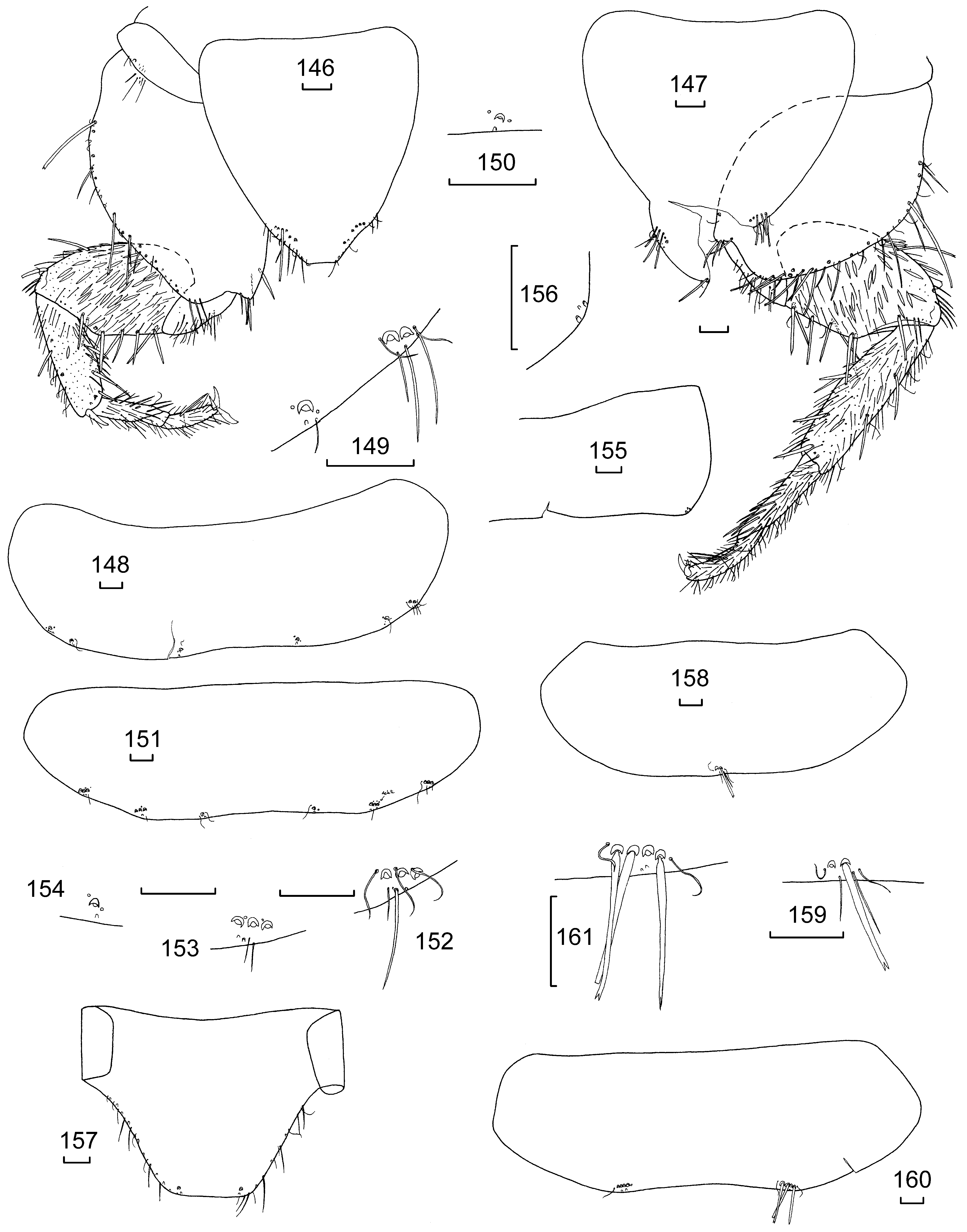 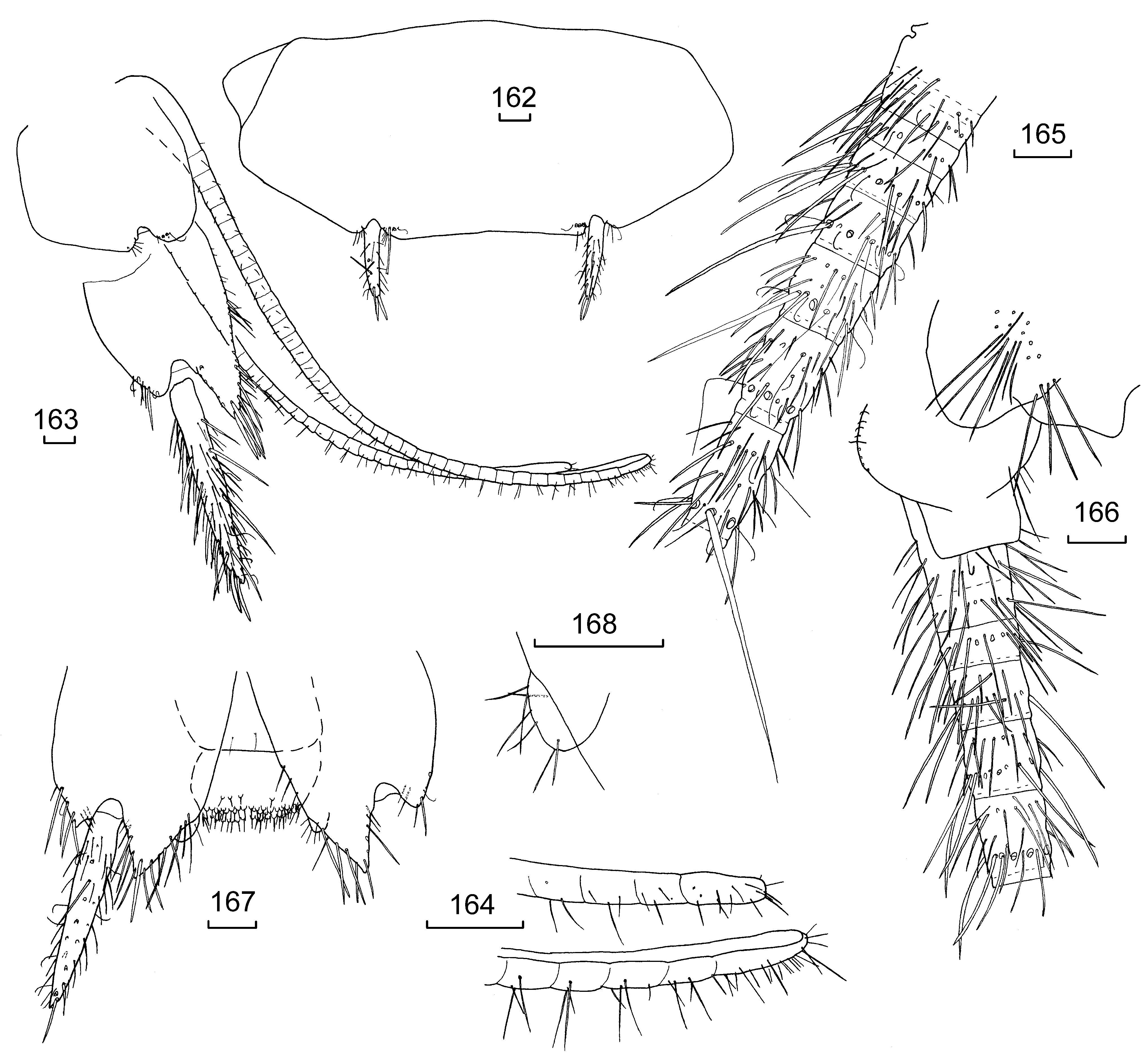