Material examined. Pugh (2001) based his redescription of Erenna richardi   on two specimens collected by the JSL submersibles. The specimen from JSLI Dive 2889 was donated to the Natural History Museum, London, while the JSLII Dive 1456 specimen was retained and has been re-examined during the present study. In addition, thirteen specimens of Erenna richardi   , as listed below, have been identified either from in situ frame grabs or from collected material (emboldened), of which the two specimens marked with an asterisk have been examined.

Description. Pugh (2001) gave a comprehensive description of this species and here we will only add any further information that can be gleaned from the recently collected specimens. Pugh's figure 1 showed an in situ specimen that, with the benefit of hindsight, can be instantly recognised as Erenna richardi   . The massive arrays of substantial tentilla, the side branches of the tentacle, are particularly obvious and clearly establish the identity of this species when observed in situ, as can also be seen for the specimens shown in Figures 1 View FIGURE 1 and 2 View FIGURE 2 . The colony shown in a recent video uploaded to the web (http://www.nautiluslive.org/video/ 2014/06/27 /stunningsiphonophore-sighting) clearly belongs to E. richardi   , as a close up of its unmistakeable tentilla is included. Possible characters that might help to identify the other Erenna   species in situ are discussed below. Another brief video sequence taken during a dive of the ROV Doc Ricketts shows a specimen of E. richardi   that had ensnared a large snailfish.

Nectosome and pneumatophore: A close up of the anterior end of a colony of Erenna richardi   collected during Doc Ricketts Dive 100 ( Figure 3 View FIGURE 3 ) showed a featureless pneumatophore devoid of any pigmentation. Posterior to it was a cluster of very small nectophoral buds with prominent, brown coloured, radial canals, and distinct white lateral ostial processes, on either side of the ostium. A larger nectophoral bud ( Figure 3 View FIGURE 3 , left) showed its lateral radial canals to be much broader in their central, arched region and to contain dark brown pigmentation.

Nectophores: The larger nectophores have been illustrated by Pugh (2001) and require no further comment, except to draw attention again to the two small conical protuberances on the lower side of the large, deeply emarginated thrust block. At that time these digitate processes characterized the species, but one of the new Erenna   species has somewhat similar processes and detailed comparisons will be made below. Pugh (2001) also commented that these protuberances were not to be seen on the younger nectophores. One other characteristic feature that Pugh (ibid. p. 171) noted was that, in addition to the basic ridge system, consisting of upper and lower lateral and vertical lateral ridges, there were "at least two pairs of incomplete lateral ridges passed obliquely down the lateral facet in the basal half of the nectophore", which still remains a distinctive character for the species.

The two pairs of incomplete lateral ridges could be seen on a young nectophore ( Figure 4, lr); the upper pair being very distinct while the lower pair was barely visible. At this stage the thrust block was only slightly developed, and there was no sign of the digitate protuberances that characterize the fully developed nectophore. The lateral radial canals still showed a distinct thickening (rct) at their lateral corners. The lateral patches of ectodermal cells (ls) just distal to the vertical lateral ridges were small and indistinct, while each of the lateral ostial processes (lop) was well developed. A canal ran through each process, originating from where the lateral canal joined the ostial ring canal. In their mid region these processes were overlaid by rounded ectodermal cells that included nematocysts. These cells extended round the lower half of the ostium, while the upper half was lined by a separate group of cells that were thickest in the region where the upper canal joined the ostial ring canal. A few discharged nematocysts were found that measured c. 93 x 30 µm. They appeared to have no shaft, while the long tubule had spines arranged in spirals around it. This would suggest that they were some form of haplonemes or isorhizas. However, for other species, nematocysts like these were found to have a shaft that was only slightly wider than the tubule, and so the identity of these nematocysts remains uncertain.

As the nectophores grew the thrust block gradually increased in size and, for the nectophore shown in Figure 5 View FIGURE 5 , it consisted of two small lobes, and there was a very vague indication of the start of the development of the two small digitate processes. The lower lateral ridge, which paralleled the upper one, at first became more obvious, although not as much as the upper one. However, with further development, both ridges began to become less obvious, such that in the fully developed state they were often difficult to discern. For the nectophore shown in Figure 5 View FIGURE 5 the ostial region had been tilted upwards so that the branching of the upper lateral ridges, and the ostium itself, could be seen clearly. In addition, the line of ectodermal cells on the lower half of the ostium was not as dense as it had been. In both Figures 4 and 5 View FIGURE 5 , the photographs gave the impression that the connection between the vertical lateral ridges and the lower lateral ones was weak. However, this was not the case and the connection between those ridges was distinct.

Siphosome: No detailed studies of the arrangement of the cormidia were possible due to the highly contracted nature of the preserved material.

Bracts: All Erenna   species appear to have two types of bracts, with what we will call Types A and B; the former being relatively long and narrow, the latter shorter and broader. These two types were clearly illustrated by Pugh (2001), and the possible ways of distinguishing the Type A bracts of all the species will be discussed below. Pugh (2001) also mentioned that the canal of the bract terminated, distally, below a cupulate patch of ectodermal cells, including some nematocysts. These nematocysts ( Figure 6 View FIGURE 6 A) measured c. 70 x 25 µm and appeared to be similar to those on the lateral ostial processes of the nectophores. On some bracts they appeared to be fairly randomly scattered amongst the other cells, which far outnumbered them, although in other cases they appeared to form an outer ring, surrounding the other ectodermal cells that were sites of bioluminescence.

Gastrozooid: As Pugh (2001) noted, Margulis (1977) was somewhat confused regarding the gastrozooid, it seemed that for her specimens the stomach region had become detached from the proximal basigaster, so that she described the tentacle as being attached to a structure with two lateral spherical dilations. This, of course, was the basigaster (see Figure 6 View FIGURE 6 B) that consisted of two large lateral inflations and, usually, a smaller one on the side opposite to where the tentacle was attached. There was no obvious peduncle.

Tentilla: The basic structure of the tentillum was described in detail by Bedot (1904), and elaborated upon by Pugh (2001), particularly with regard to the developmental stages. Bedot noted the pair of bodies of ectodermal material that were present in the terminal process in the region where the diverticular canal arose. Lens & van Riemsdijk (1908) referred to them as "ocelli", but Haddock et al. (2005) found that they were sites of bioluminescence and were, in actuality, photophores, and were filled with calcium-activated proteins. The lateral margins of the cnidoband were demarcated by rows, usually two, of large nematocysts measuring c. 165 x 32 µm ( Figure 7 View FIGURE 7 A, B). Within the undischarged nematocysts of this type the shaft can clearly be seen and when devaginated that shaft was approximately the same length as the nematocyst capsule ( Figure 7 View FIGURE 7 B). The shaft was quite narrow, but the point where the shaft ended and the tubule began can clearly be seen. These nematocysts appear to be microbasic mastigophores.

Pugh (2001) noted two other types of nematocyst that measured c. 43 x 15 µm and c. 27 x 20 µm. However, the present re-examination suggested that there was a large variation in their sizes. Figure 7 View FIGURE 7 D shows some of the small pear-shaped or ovoid type that had discharged, and Figure 7 View FIGURE 7 C shows a nematocyst apparently preserved during the process of devagination. It can be seen that the process of devagination gave rise to a proximal, asymmetric swelling, apparently devoid of any spines. In turn, this gave rise to a distal tubule of considerable length and bearing spirally arranged spines. These nematocysts do not appear to conform to any of the basic types of nematocyst as illustrated by, for instance, Werner (1985). They somewhat resemble euryteles but the proximal vesicle does not appear to have any superficial spines, and its asymmetry is very striking. The other cylindrical type of small nematocyst was found to be very rare and was not investigated further for this particular species.

Distribution. Pugh (2001) reviewed the then known distribution of Erenna richardi   , and considered that any nectophore where there was black pigmentation in the radial canals belonged to this species. However, we now know that this is not a character specific to E. richardi   , since the black pigmentation is undoubtedly derived from the fish prey that the species of this genus consume. Thus, a few of the records that he gave may not have actually referred to this species.

In the intervening period there have been only a few additional records; all from the eastern North Pacific Ocean. Hung (2002), Pan (2004) and Yu (2006) all found specimens off the coast of Taiwan apparently at shallow depths. However these records were all included in M. Sc. theses, all in Chinese and from the National Sun Yat-sen University, Kaohsiung, Taiwan   . Thus, there is the possibility that there has been some cross-referencing. Nonetheless, Grossmann & Lindsay (2013) found two specimens in Sagami Bay , Japan at depths between 850 & 950 m. 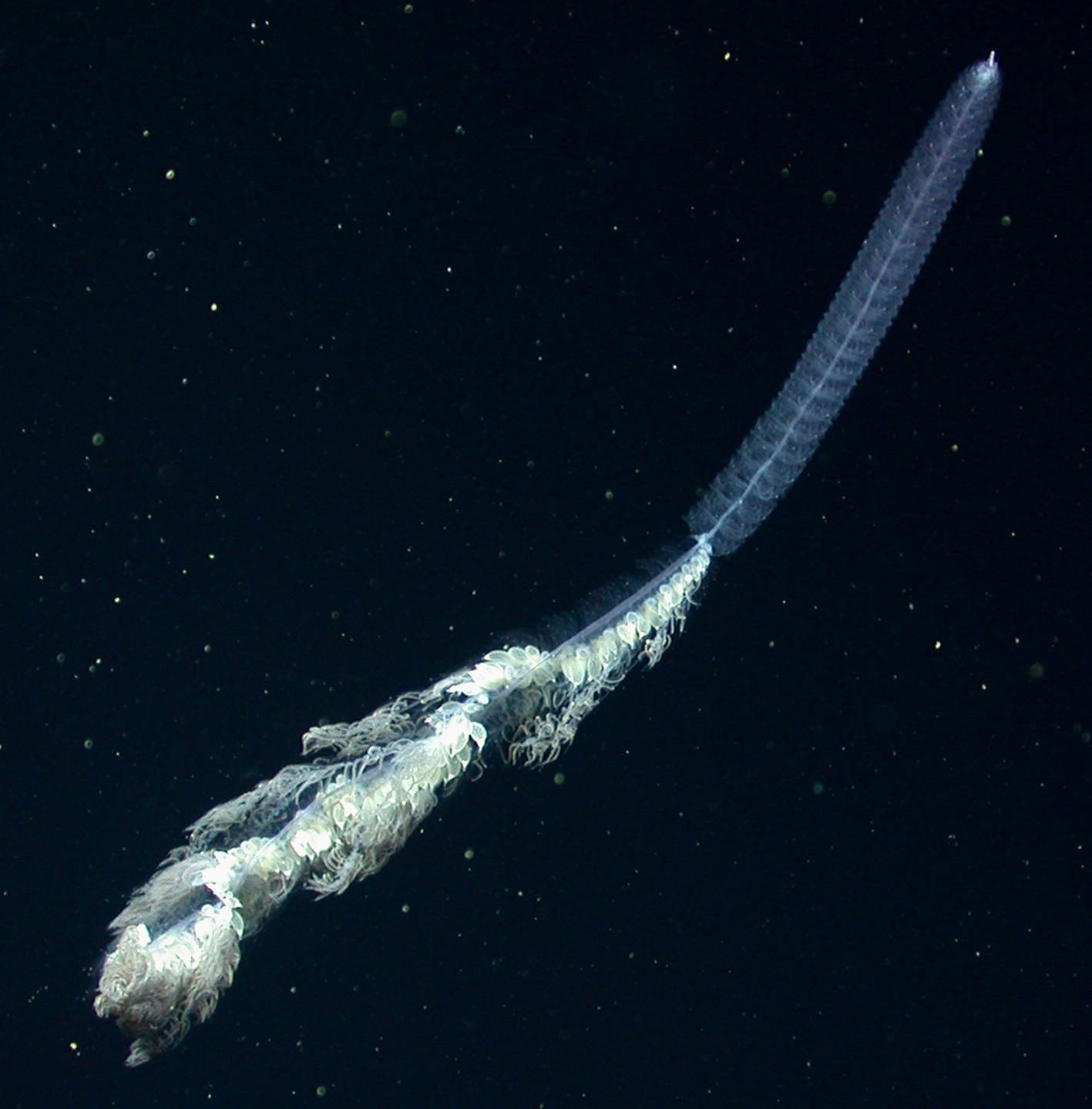 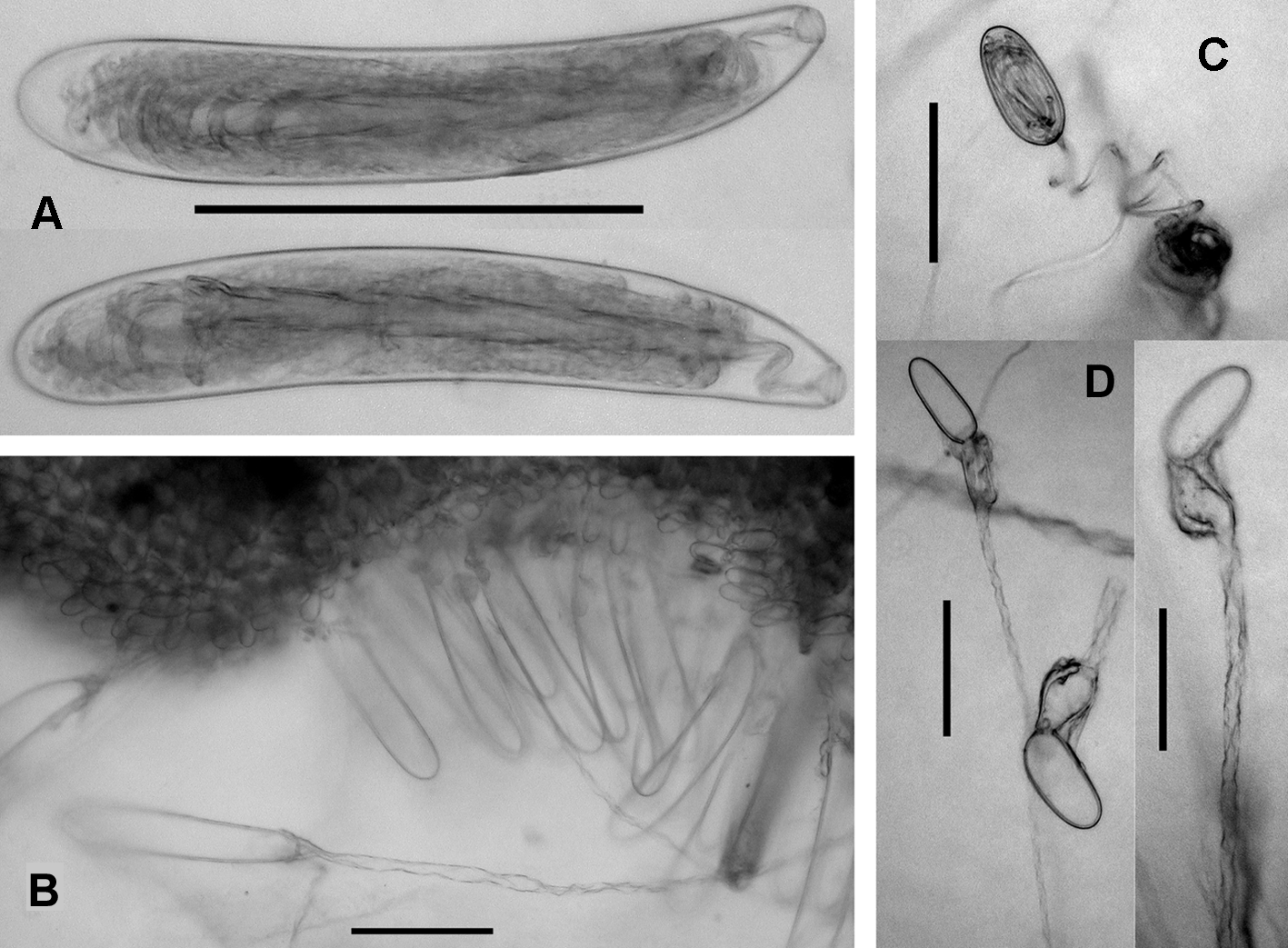 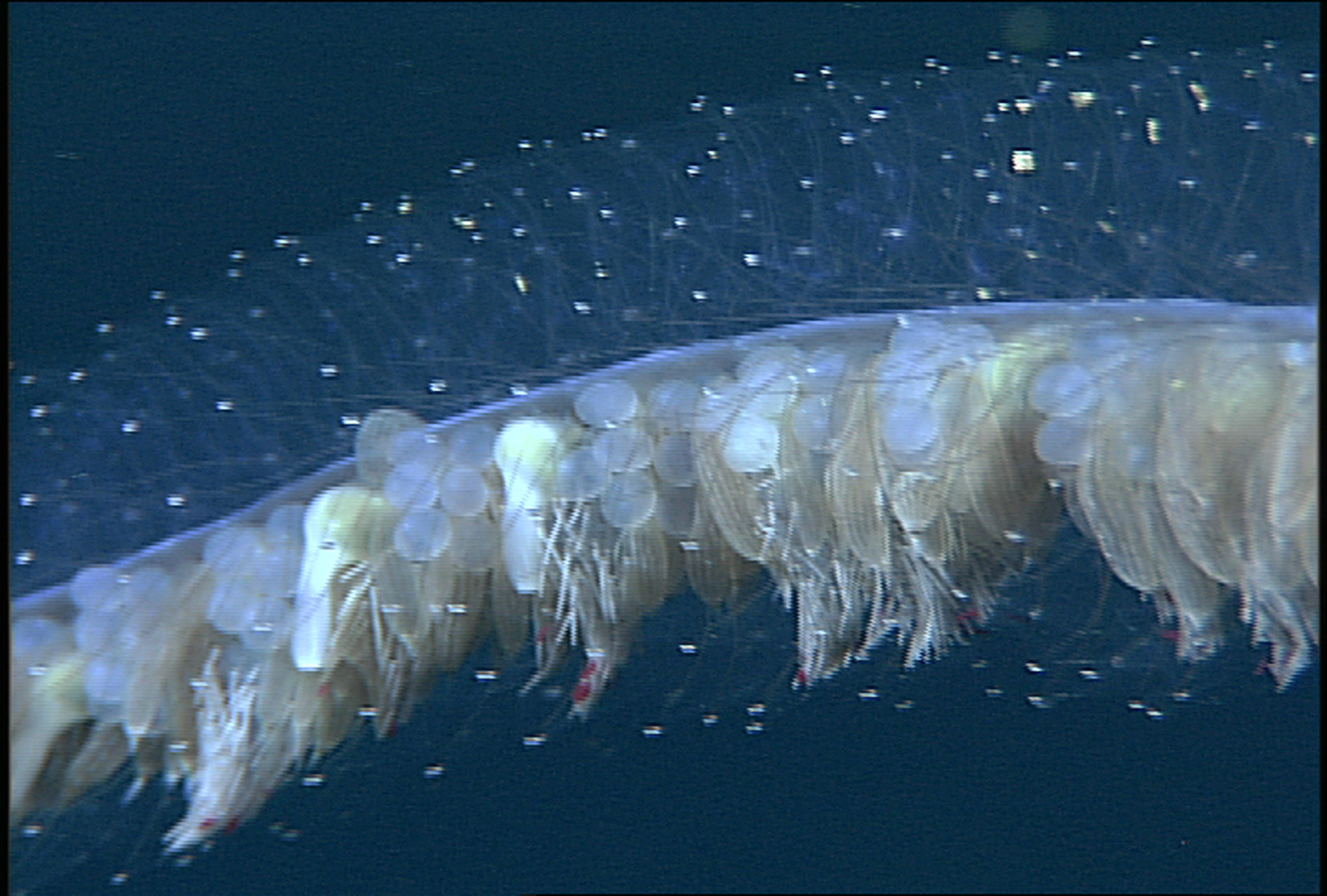 FIGURE 38. Erenna sirena sp. nov. In situ photograph of colony seen during Tiburon Dive 647 at a depth of 2213 m. MBARI.