Diagnosis. Nectophores large, dorso-ventrally flattened, with only basic erennid ridge pattern; with apico-laterals dividing into three close to ostium. Thrust block small, with U-shaped median indentation and lower flaps, but no conical protuberances. Lateral radial canals only slight thickened at apico-lateral corners of nectosac. Bracts of two types, with lateral flap, more extensive in one type than the other. Tentilla characteristic, with terminal process arising close to base of cnidoband and bearing two distal photophores.

Material examined. Only two further specimens have become available for examination and, although they were large, they mainly consisted of nectophores with very little of the siphosome either collected and/or preserved. Recently, three others, see below, have been caught, but they have not been examined for the present study and are housed in the siphonophore collections at Brown University.

Description. Figure 8 View FIGURE 8 shows a large specimen of Erenna laciniata   from Doc Ricketts Dive 339 at a depth 1581 m with 40+ mature nectophores, and some extended tentacles with their relatively small Y-shaped branches, or tentilla, that characterize this species. Figure 9 View FIGURE 9 A shows a smaller specimen from Tiburon Dive 534 at a depth of 1173 m. Here the black pigmentation in the radial and ostial ring canals can clearly be seen. In both the distal tips of the bracts are demarcated by a white patch that was filled with nematocysts. The small, circular nature of this patch clearly distinguishes specimens of E. laciniata   from those of E. cornuta   , which has elongated patches. This is a useful character as the two species have overlapping depth distributions.

Nectophores: The nectophores of the new material were slightly larger than those of the type specimen, with the Doc Ricketts Dive 334 ones averaging 30 mm in length and 33 mm in width, with a maximum of 33 x 39 respectively. The division of the upper lateral ridges close to the ostium was confirmed, particularly for the younger nectophores ( Figure 10 View FIGURE 10 ), whereas in the mature ones it was very vague. There appeared to be three pairs of broad branches, forming the letter "m", although the outermost one, which formed part of the lateral ostial process, was often very vague The extensive lateral ostial processes originally possessed nematocysts but by the time the nectophores were mature they had largely disappeared, either through abrasion or usage. The large lateral patches of ectodermal cells, just distal to the vertical lateral ridges, were not very distinct at this early stage of development ( Figure 10 View FIGURE 10 ). As with other Erenna   species, there appeared to be a black-pigmented canal through the centre of the lateral ostial process and connecting with the ostial ring canal at the same level as the lateral radial canals.

Siphosome: Figure 11 View FIGURE 11 shows a close up of the in situ siphosome of the specimens observed during Tiburon Dive 534 and Doc Ricketts Dive 339. The black-pigmented canals of the bracts, ending in the circular white patches of nematocysts can clearly be seen. The structure of the two types of bract was sufficiently described by Pugh (2001) and nothing more needs be added here.

Tentacle and Tentilla: The in situ photographs often showed Erenna laciniata   with several tentacles extended to considerable lengths and bearing small side branches that could look like a string of beads. However, on one specimen ( Figure 12 View FIGURE 12 ) the distal part of the tentacle was contracted, while the proximal part remained relaxed, with the young tentilla spaced apart. A much more pronounced manifestation of this character will be described for one of the new Erenna   species.

The relatively small size of the tentilla can clearly been seen in Figure 12 View FIGURE 12 , and photographs of mature tentilla are shown in Figure 13A View FIGURE 13. A . The cnidoband was characteristically forked at its proximal end and encased either side of a vacuolated tissue that arose from the pedicle of the tentillum. At the point where the cnidoband forked it separated from this spongy tissue, which then formed a long, narrow tube that extended further than the cnidoband itself. Towards its distal end there was a pair of small photophores filled with calcium-activated proteins. In the shipboard laboratory these tubular processes were seen to wriggle and writhe in an apparently uncoordinated manner quite unlike the coordinated "squid jigging" movements performed by one of the new Erenna   species (Haddock et al, 2005). Nevertheless, they no doubt were acting as lures. The Doc Ricketts Dive 334 specimen possessed only immature tentilla and a series of developmental stages in shown in Figure 13 View FIGURE 13. A B. In general the cnidoband and the tubular process increased in size concomitantly, and the photophores were more obvious than on the mature tentillum.

Pugh (2001) noted the presence of the three usual types of nematocysts, with large anisorhizas, which measured c. 128 x 27 µm, arranged along the lateral margins of the cnidoband. Between them were numerous smaller nematocysts of two shapes with the more cylindrical ones measuring c   . 40 x 15 µm and the more ovoid ones c. 32 x 18 µm. No further investigations were carried out on the present material.

Palpon: The palpons of the new material were investigated for the presence of nematocysts, as Pugh (2001) had only noted that they were absent on the palpacles. It was found that there was a serried ring of 20–30 nematocysts surrounding the distal mouth opening. These nematocysts measured c. 98 x 27 µm.

Gonophore: No mature gonophores were found with the new material, although they can clearly be seen on the aforementioned in situ photographs.

Distribution. The original specimens, as described by Pugh (2001) came from the Dry Tortugas (JSL1454 – type) and The Bahamas (JSL1688) at depths of 811 and 853 m, respectively. Some additional material may have come from the Discovery collections on the equator (800–900 m) and 3°N (0–1000m oblique). The only other published records are from Sagami Bay, Japan ( Kitamura et al., 2008; Lindsay & Miyake, 2009). The former authors included a typical in situ photograph of a specimen and a picture of a mature tentillum. The specimens were collected, or observed, between 690 and 860 m. We also list below the specimens of Erenna laciniata   that have either been identified from in situ photographs or collected (emboldened) by the MBARI ROVs in recent years.

Thirty specimens of Erenna laciniata   , six of which were collected, have been identified from the MBARI database of in situ photographs. They were observed in two main localities: Monterey Bay (MB— 10 specimens) and the Gulf of California (GOC— 20 specimens). For MB the mean depth for the specimens was 1145 ± 620.1 m   ; the result, however, being heavily skewed by one specimen ( Ventana   2570) that was found at the unusually shallow depth of 289 m. If this specimen was excluded, then the mean depth becomes 1230 ± 75.7 m. For the GOC specimens it was 1320 ± 149.5 m. Thus, in general the Monterey Bay specimens existed at shallower depths than those in the Gulf of California, as one might expect if their depth distribution was related to water temperature. Indeed , the temperatures at these depths were 3.4 ± 0.7°C for MB (excluding the Ventana Dive 2570   specimen), and at GOC it was 3.5 ± 0.4° C. As the 20 specimens of E. laciniata   from the Gulf of California were collected during just three cruises, while there have been at least an order of magnitude more cruises in the vicinity of Monterey Bay , then this would indicate that the species is much commoner in warmer fish-replete waters. 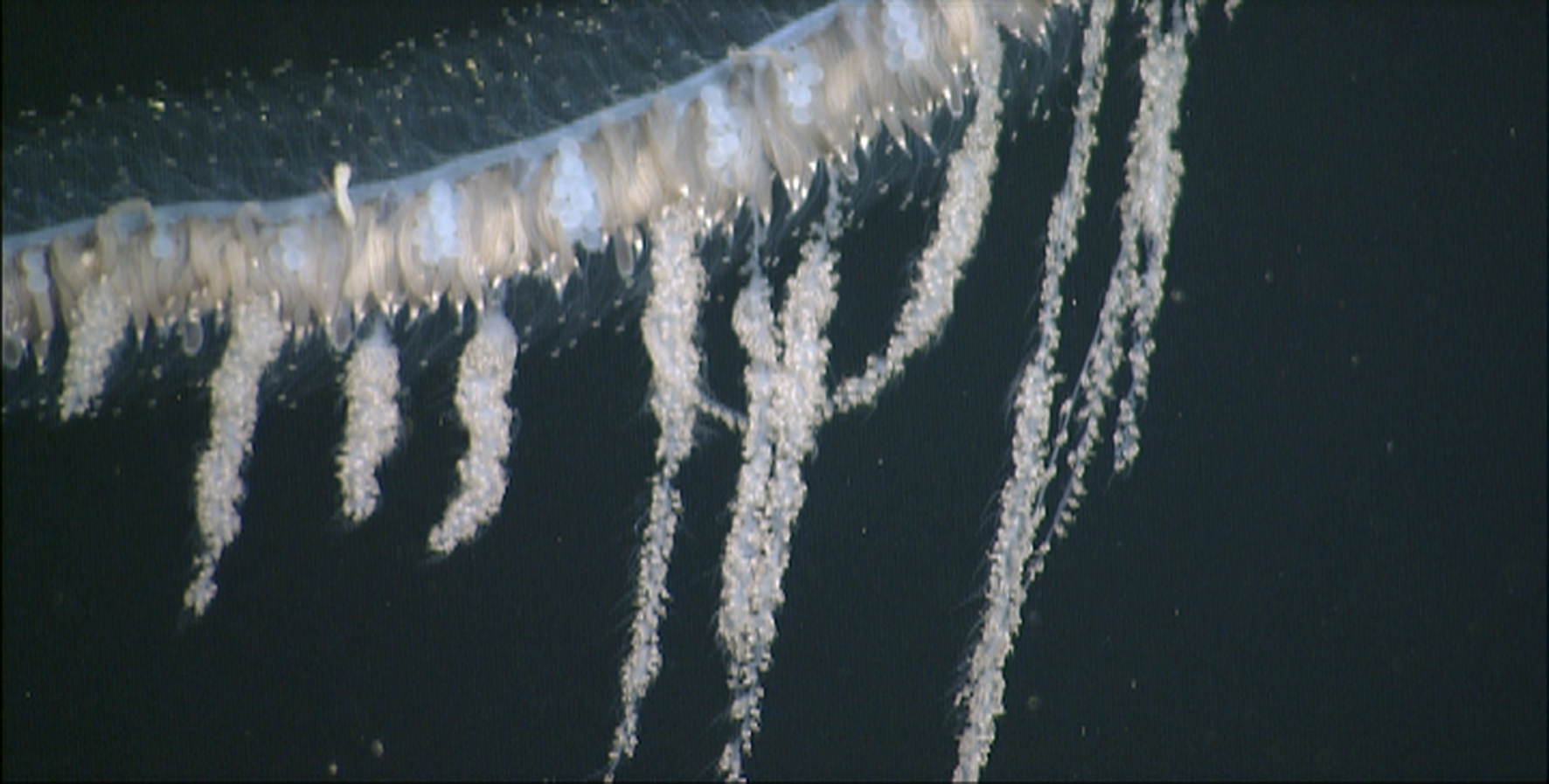 FIGURE 13. A. Mature tentilla; B. stages in the development of the tentillum of Erenna laciniata Pugh, 2001`. Scale bar 1 mm.