Descriptive notes. Measurements of the nominate form elegans   : head-body 30-38 cm, tail 26-29-1 cm, hindfoot 6-7-2 cm, ear 2-8-3 cm; weight 6565-965 g. The external measurements of the other subspecies largely overlap. There is some indication of sexual dimorphism in body size based on measurements made at Ranomafana in the eastern humid forest—eight adult males averaged 992 g (range 900-1085 g) and two adult females weighed 760 and 890 g respectively. The body form is typically mongoose-like (hence the inappropriate English common name “Ring-tailed Mongoose” that has been used in the past), with relatively short feet and a fluffy furred tail that is slightly more than two-thirds of the body length. The nominate form is the darkest, with body coloration a somber dark or reddish-chestnut, throat fulvous, top and sides of the head fulvous grizzled with black, and venter, feet and flanks nearly black. There is considerable variation in the pelage coloration of this subspecies, particularly with regard to the venter. The tail is marked with five to seven alternating dark reddishbrown and nearly black bands. The ears are noticeable, but not prominent, and are edged with a light-colored border. The other recognized subspecies tend to be paler than the nominate form, without dark venters, but the characters generally used to differentiate them are highly variable. Galidia   e. dambrensis tends to have five dark tail rings. Ring-tailed Vontsira have relatively large feet, with well-developed and naked footpads. There is also webbing at the bases of the toes. The hindfeet are longer than the forefeet, and the claws are not retractable. These various adaptations allow the Ring-tailed Vontsira to walk and run on the ground, climb trees, and swim.

Habitat. This species is the most conspicuous native carnivoran on the island, and occurs in most types of natural forest formations with the exception of the southern portion of the western deciduous forest and the south-western spiny bush. Populations in eastern Madagascar are known from littoral forests on sandy substrates and close to sea level, through the complete range of eastern humid forests up to the forest line at 1950 m. The Ring-tailed Vontsira can be seen short distances from relatively intact forest, in secondary forest and even in clearings. In the far northern end of the island, G. e. dambrensis occurs in the distinctly humid forests of Montagne d’Ambre, which grow on lateritic soils, from about 650 m to the summital zone at 1475 m, as well as in areas of mixed mesic-dry deciduous forest within the exposed karst of Ankarana. Galidia   e. occidentalis is known from widely separated zones of limestone and occurs in canyons and zones with relatively mesic habitat. Animals recorded at Tsimembo, in close proximity to Bemaraha and outside of the limestone zone, are presumably of this subspecies.

Food and Feeding. This species is omnivorous, feeding on a wide variety of small mammals (rodents, tenrecs, and lemurs), aquatic animals (fish and frogs), reptiles (including large snakes), invertebrates (crabs, crayfish, snails, worms, pill millipedes, and insects, including larvae), as well as bird eggs. It has been recorded digging rodents weighing up to 200 g out of burrows, and feeding on different species of lemur, the largest being Eastern Wooly Lemur Avahi laniger, which weighs on average 1-2 kg. It is not clear whether Ring-tailed Vontsira caught the Avahi or stole it from a bird of prey. On several occasions, Ring-tailed Vontsira have been observed resting silently at the edge of small streams, then leaping into the water and seizing prey that was presumed to be fish, frogs, or crayfish. The partially webbed forefeet help with aquatic propulsion to subdue prey. Ring-tailed Vontsiras are camp pests; once accustomed to the presence of humans they do not hesitate to raid food supplies or scavenge in camp trash. They are reputed by rural villagers to feed on poultry. This vontsira has a semidigitgrade gait and notably fleshy footpads that aid it in climbing nearly vertical tree trunks, fine horizontal branches, and lianas. This species has the ability to jump from horizontal to vertical vegetation. The population at Montagne d’Ambre (dambrensis) often searches for food in trees, up to 15 m off the ground. Here animals frequently can be seen probing in tree holes and epiphytic plants for invertebrates and small vertebrates, which they consume immediately upon capture. In the eastern central lowland, at Betampona, nearly 13% of all observations were in arboreal situations, generally less than 5 m off the ground, although in one case an animal was found at around 12 m. Various diurnal forest birds will mob this carnivore, presumably because of its habit of stealing eggs and young birds from nests. In the eastern humid forests, Ring-tailed Vontsira is sympatric with other relatively small carnivores, particularly the slightly larger Broad-striped Vontsira and the slightly smaller Brown-tailed Vontsira. Temporal niche separation may reduce competition between Ring-tailed Vontsira, which is diurnal, and Galidictis   , which is nocturnal. Few details are available on the diet of the latter species to evaluate this hypothesis. A comparative study at Betampona, where the largely diurnal Brown-tailed Vontsira and Ring-tailed Vontsira co-occur, noted a number of differences between them in prey type and habitat utilization.

Activity patterns. Recent work on radio-collared Ring-tailed Vontsira has demonstrated that they are not exclusively diurnal, as previously thought, but are occasionally active during the night. Ring-tailed Vontsiras tend to have bouts of activity in the early morning and late afternoon. They are generally considered to be terrestrial, but are agile climbers oftrees.

Movements, Home range and Social organization. Roland Albignac conducted fieldwork on this species in several different forest types and consistently estimated home range size, extrapolated from trapping studies, to be 20 to 25 ha. On the basis of a short-term capture-mark-release study in humid forest in the Ranomafana National Park, the density index was estimated to be 37 animals per km? which may be a slight overestimation. An animal marked in the humid forest in the extreme south-east at 810 m elevation was observed several days later at 1200 m, a straight-line distance of about 2-5 km. In some zones it can reach noticeably high densities. For example, at 1000 m on Montagne d’Ambre, it was very common in the mid-1990s. During the course of seven days of trapping at this locality, with 20 carnivore traps set each day, more than 28 Ring-tailed Vontsira were captured in a relatively limited area. This forested site has high densities of introduced Rattus, which the Ring-tailed Vontsira feed upon. Little is published about the social organization of this species in the wild, but based on field studies it appearsto live, at least seasonally, solitarily or in small groups of three to four individuals. The small groups presumably are composed of a male-female pair and their sub-adult young. Aggressive encounters between individuals, particularly adult males, often include a distinctive submissive display by the non-dominant animal. The submissive animal bends the front limbs so the chest practically touches the ground, the ears are folded backwards, the teeth exposed, and the snout is pointed up, almost touching the face of the dominant animal. When the dominant individual approaches, the submissive animal gives a loud, high-pitched screeching vocalization. Trapped animals produce a two-part threat call, a guttural growl followed by a raspy spitting sound. This species is rather vocal and its auditory signals have been classified into four types: a whistle-like contact call between family members, often given while moving through the forest; a specific prey capture call; growl and shrill screams as intimidation, attack or defense calls; and a copulation vocalization. Adults regularly scent-mark within their home range using urine and a form of musk produced by their perineal, cheek, and sub-mandibular glands. Dens of this species have been found in a variety of settings, and it is capable of digging its own burrow systems. In exposed sedimentary rock zones, such as the Bemaraha Plateau, lairs have been found in rock crevices and subterranean passages. In the humid forests of the east, dens tend to be in the ground underlarge trees, in carved-outsoil fissures along riverbanks, or in the hollow bases of large standing trees or downed hollow logs. Often the dens have numerous openings. They are not necessarily used by the same individuals on consecutive nights.

Breeding. Mating in the eastern forests generally takes place between July and November. The gestation period is about 75 days and litter size is one. Females have one pair of inguinal mammae. Before copulation the male pursues the female with increasing intensity and both animals mark prominent objects with the cheek and sub-mandibular glands. Males frequently sniff the females’ urogenital region. Copulation takes place after the female solicits the male by lowering and quivering the anterior portion of the body and slowly treading the hindquarters. Neck biting was not observed in this species. Individual copulation bouts usually last 10-30 seconds and the complete sequence of 7-12 copulations takes place during a period of 15-80 minutes. Neonates are fully furred, generally weigh between 40 and 50 g, and have the same pelage coloration as adults. The auditory canal is open at birth, the eyes open on day 4, the incisors erupt on day 8, and the premolars on day 21. Walking commences at day 12. Weaning takes place at approximately 2 to 2-5 months and the young start to hunt small prey at three months; they retain the deciduous dentition until seven months. After the young become active, they can be seen foraging in the forest with their parents; they probably remain with their parents for up to one year, when they reach adult size. They reach reproductive age at two years. There is some evidence that in some portions of this species’ range, females may reproduce twice in good years. This might explain pairs being observed with two young of different sizes.

Status and Conservation. Listed in The IUCN Red List as Least Concern. The result of a Conservation Breeding Specialist Group workshop sponsored by the SSC/IUCN held in 2001 and attended by specialists working on Madagascar Carnivores gave the status of G. e. elegans   and G. e. occidentalis as Least Concern and that of G. e. dambrensis as Vulnerable. Continued reduction of forest cover across this species’ range is a major pressure on existing populations. Perhaps of less importance is the utilization of body parts of this animal, particularly in the southern portions of its range, for various medicinal and supernatural potions, as well as its being hunted for bush meat. It can be found at the ecotone between forest and anthropogenic zones, where it is in contact and conflict with people and their domestic animals. Ring-tailed Vontsira are considered poultry raiders and are hunted and persecuted. Their bad reputation may not be deserved, since Ring-tailed Vontsira is a conspicuous diurnal animal. In general, given the wide distribution of Ring-tailed Vontsira on Madagascar and their relatively high densities in certain areas, they are among the less threatened native Carnivora   on the island. Further, they occur in regenerating forests, cross open areas between forest fragments, and are seen where there are non-native trees in close proximity to native forests. 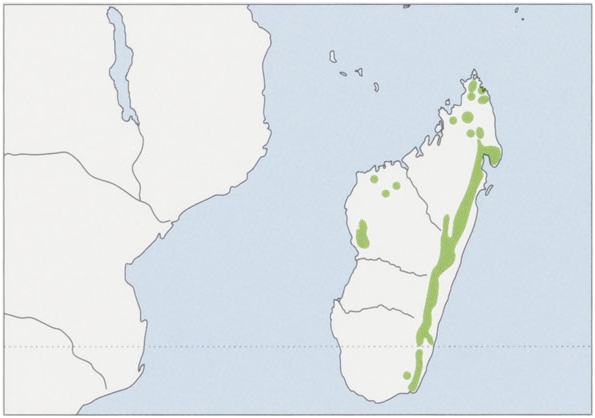