DIAGNOSIS: Distinguished from congeners by the presence of scales extending fully onto the head. Head is more or less fully scaled, including opercle and subopercle, cheek (suspensorium), snout (extent of squamation variable), preorbital and interorbital regions, and nape. Typhleotris madagascariensis  is further distinguished from the new species by the absence of pigment on the body and fins, a shorter second predorsal length (56.2–64.1 vs. 64.9–69.0 in new species), and a more or less rounded head and snout in dorsal and lateral view (vs. strongly concave/indented in orbital region), and from T. pauliani  by a pelvic count of I, 5 (vs. I, 4 in T. pauliani  ) and the absence of spines in both the second dorsal and anal fins (vs. single spine present in both fins in T. pauliani  ).

Head fully scaled, including snout (in some individuals scales extend rostrally almost to upper lip, to lateral ethmoid and median ethmoid). Squamation extends rostrally to anterior margin of frontal bones, where scale rows become constricted (narrow) medially. Scales sparsely arrayed over lateral ethmoid and median ethmoid (figs. 2, 6A, 7A, 8A). Laterally, ctenoid scales extend anteriorly over pterygoid elements to posterior portion of elongate, thin palatine. All scales on body and head strongly ctenoid, except on ventrum. Cycloid scales on ventrum extend from around anus and urogenital papilla to anterior margin of chest. Scales on belly and chest highly embedded and difficult to see in preserved specimens (i.e., can easily be seen in C&S individual, AMNH 245610, 39.0 mm SL). Scales on head, opercle, and dorsum strongly ctenoid. Scales becoming increasingly more embedded posteriorly on flank and dorsum, and on caudal peduncle to flexure, such that they may appear cycloid upon casual examination. All fins asquamate, except in some individuals a few scales may extend slightly onto base of caudal fin. Otherwise, body fully scaled to caudal fin, including regions both anterior and medial to pelvic fin. Scales arranged in irregular rows, uneven in size, with smallest on roof of head, and largest on operculum. Pectoral-fin axil and fleshy base asquamate.

It is worth noting that there is some intraspecific variation in scale morphology, as the two individuals from MNHN 1968-167View Materials (50.3–81.4 mm SL, region: Toliara, locality: Tulear [no additional locality data provided], southwestern Madagascar, coll. A. Kiener) appear to have mostly cycloid scales covering the head (some ctenoid scales present on the operculum), whereas in all other available material the head is covered with ctenoid scales. Unfortunately, collection locality information for this lot is lacking, indicating only Tulear (Toliara), the largest city in the general region. These individuals may simply be aberrant in terms of scale morphology on the head, or this variation could be unique to an isolated population  .

COLORATION AND PIGMENTATION PATTERN IN LIFE AND ALCOHOL (fig. 2): Body without pigment and uniformly white in coloration. In life, body is relatively translucent, whereas translucency is lost and body becomes an opaque white in alcohol. It is worth noting that all recently collected material is entirely lacking in pigment (e.g., fig. 2B), whereas some historical specimens (MNHN 1963-174, 2 ex., 50.3–81.4 mm SL; fig. 2C) appear to be somewhat light brownish overall. There is no way of knowing, unfortunately, whether this faint pigmentation is simply an artifact of preservation.

ETYMOLOGY: Named by Petit (1933) for the country of origin.

DISTRIBUTION AND HABITAT (figs. 1, 3): Restricted to subterranean habitats (caves, sinkholes, wells) within the Mahafaly Plateau karst formation, as well as isolated locations with Eocene limestone along the coastal plain below and to the west of the plateau, to the south of the large Onilahy River drainage basin. The geographic range of T. madagascariensis  extends from wells near Ambilahilalika (approx. 23°52′S), located about midway between Soalara and Efoetse in the north, southward to Nikotsy sinkhole, located just to the north of Itampolo (24°40′S) (fig. 1). Reports from locals indicate the presence of blind, pigment-free Typhleotris  southward to just north of the Linta River, which could extend the southern range limit of T. madagascariensis  if confirmed through additional fieldwork.

REMARKS AND COMPARISONS: Typhleotris madagascariensis  can be distinguished from congeners by the presence of a fully scaled head, whereas both T. pauliani  and T. mararybe  have scales extending anteriorly only up to the roof of the head and onto the operculum, not fully covering the cheek and not extending onto the anterior portions of the head, such as the orbital region, snout, and anterior portion of the frontal bones. This species can also be distinguished from congeners by the presence of strongly ctenoid scales on the flank and dorsum (vs. cycloid in congeners).

Typhleotris madagascariensis  appears to have a rather widespread range, and is known from several localities throughout the southern portion of the Mahafaly Plateau, south of the Onilahy River, but, unfortunately, the species is not common or abundant anywhere within its range. These cave and sinkhole habitats are fragile and rather ephemeral systems, although most are so isolated that there is little danger from human encroachment. Only the collection localities within Tsimanampetsotsa National Park, including the Mitoho Cave tourist site, Andranomalaza (Vintany) sinkhole, Andranoilovy (Andranilove) Cave, and Andriamaniloke Cave, are afforded any official protection from the Malagasy government, and receive few visitors annually due to their relative inaccessibility. 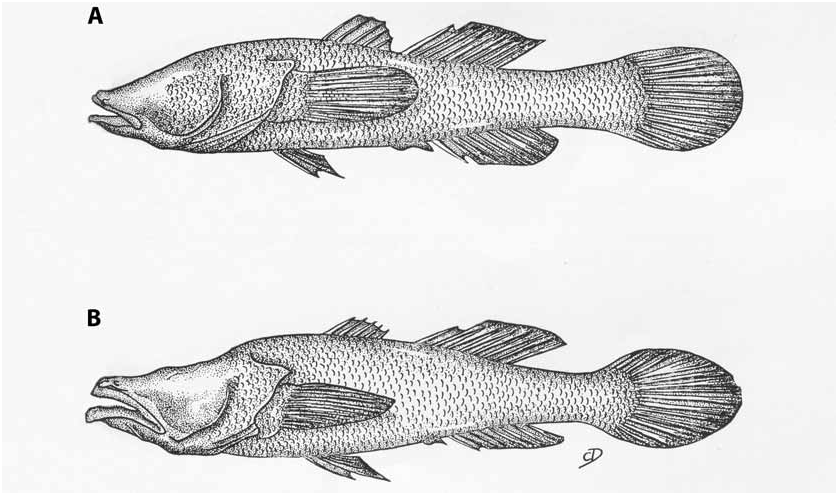 FIGURE 6. Illustration of A. Typhleotris madagascariensis and B. T. pauliani after Arnoult (1959b), showing general body and fin shape, as well as differences in extent of head squamation between species.