All species of the A. apicalis   group for which host data exist are parasitoids of Noctuidae   . However, the putatively more basal A. fortipes   belonging to the Hemigyroneuron   clade (see below) is a parasitoid of Geometridae   . Also, only A. fortipes   and A. sibiricus   are known to parasitise hosts only in spring although these hosts would have been available in autumn of the previous year. Possibly others in the A. apicalis   group will be found to do this too, and we consider the habit putatively as ancestral, in contrast with the more derived A. circumscriptus   and A. bicolor   groups in which species using hosts that overwinter as larvae invariably (as far as known) parasitise the host in the autumn and overwinter as a young larva inside it.

While we have no host data for a disappointingly large number of species of the A. apicalis   group, the form of the clypeus may give important clues as to the site at which host mummification occurs, as those species in which mummification is known to take place in open situations (e.g., on a twig or in a leaf curl) invariably have a relatively small hypoclypeal depression and the clypeal margin blunt ( A. apicalis   , A. aterrimus   , A. fortipes   , A. nobilis   , A. pulchripes   , A. rugulosus   ) while species known to cause their hosts to mummify in concealed situations tend to have the hypoclypeal opening wider and the margin sharper (e.g., A. cruentus   , A. dissector   , A. ruficornis   , A. sibiricus   , A. unipunctator   ).

According to the 28S + COI analysis by Zaldívar-Riverón et al. (2008) the following former subgenera or genera belong to this group: Chelonorhogas   Enderlein, [1st Sept.] 1912 (worldwide), Eucystomastax   Brues, [(end of?) Sept.] 1912 (Neotropical group with 2nd and 3rd maxillary palp segments enlarged), Hemigyroneuron   Baker, 1917 (Old World group with distal half of subbasal cell of fore wing modified and glabrous), and Dimorphomastax   Shenefelt, 1979 (males of this monotypic Neotropical group have a large curved tooth near the base of the mandible (an outgrowth of the condylar carina) and the hind tibial spurs are blunt apically; females have the tooth smaller and triangular, and the hind tibial spurs are acute). Butcher et al. (2012) indicate in their cladogram based on the analysis of COI sequences that A. fortipes   (Reinhard) forms together with Hemigyroneuron   Baker and Arcaleiodes   Chen & He the most basal clade of Aleiodes   Wesmael, and it is noteworthy that all known hosts of this clade are Geometridae   (see species entry for A. fortipes   ). According to the same analysis the A. apicalis   group consists of three clades: (i) the Hemigyroneuron   clade (see above; likely also includes A. caucasicus   (Tobias)), (ii) the A. rugulosus   clade (including the Asian group with modified pronotum), and (iii) the A. gasterator   clade. Since we do not have the COI sequences of all species, we unite these three clades in the A. apicalis   group to allow identification based on their morphology. 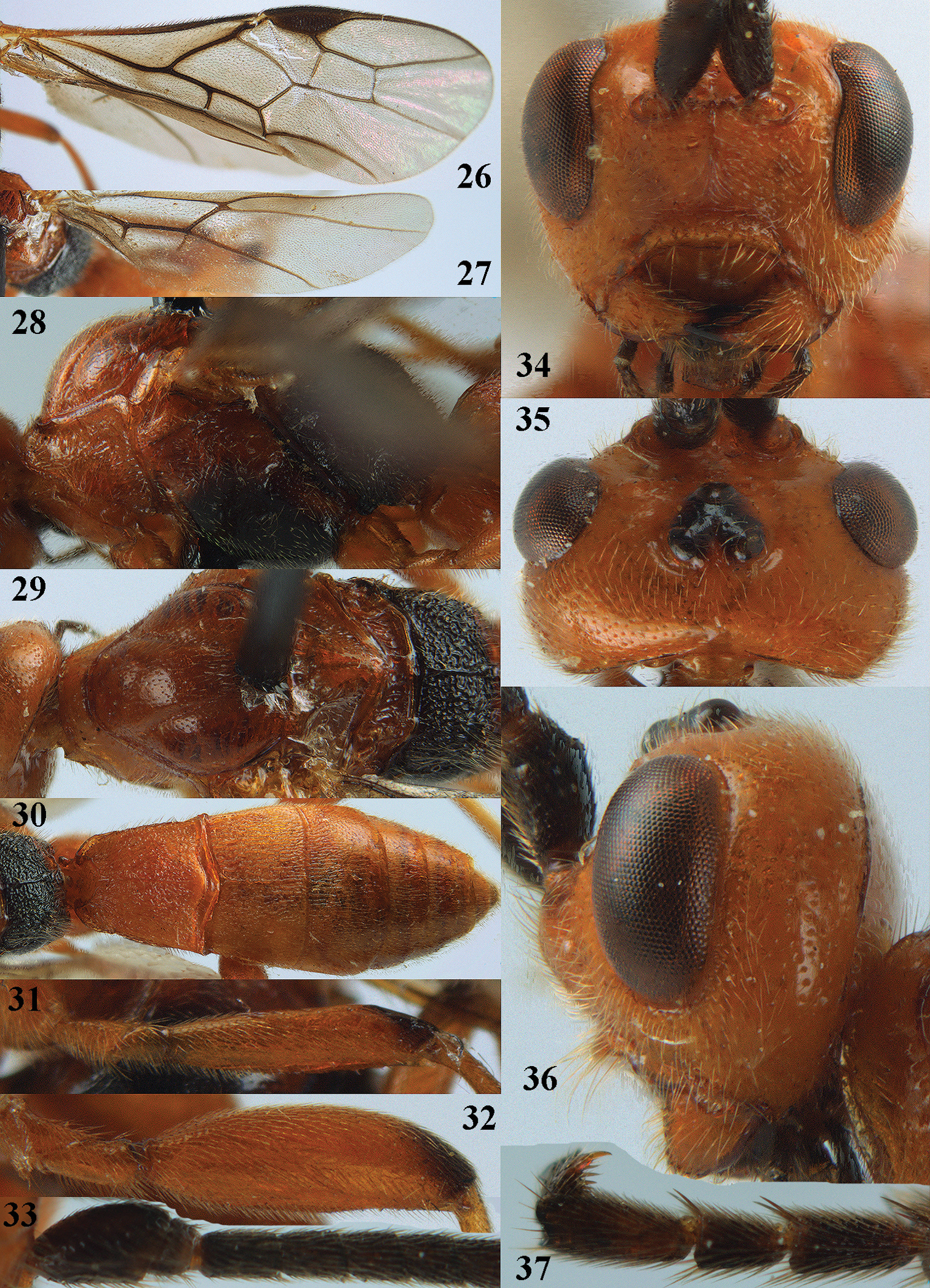 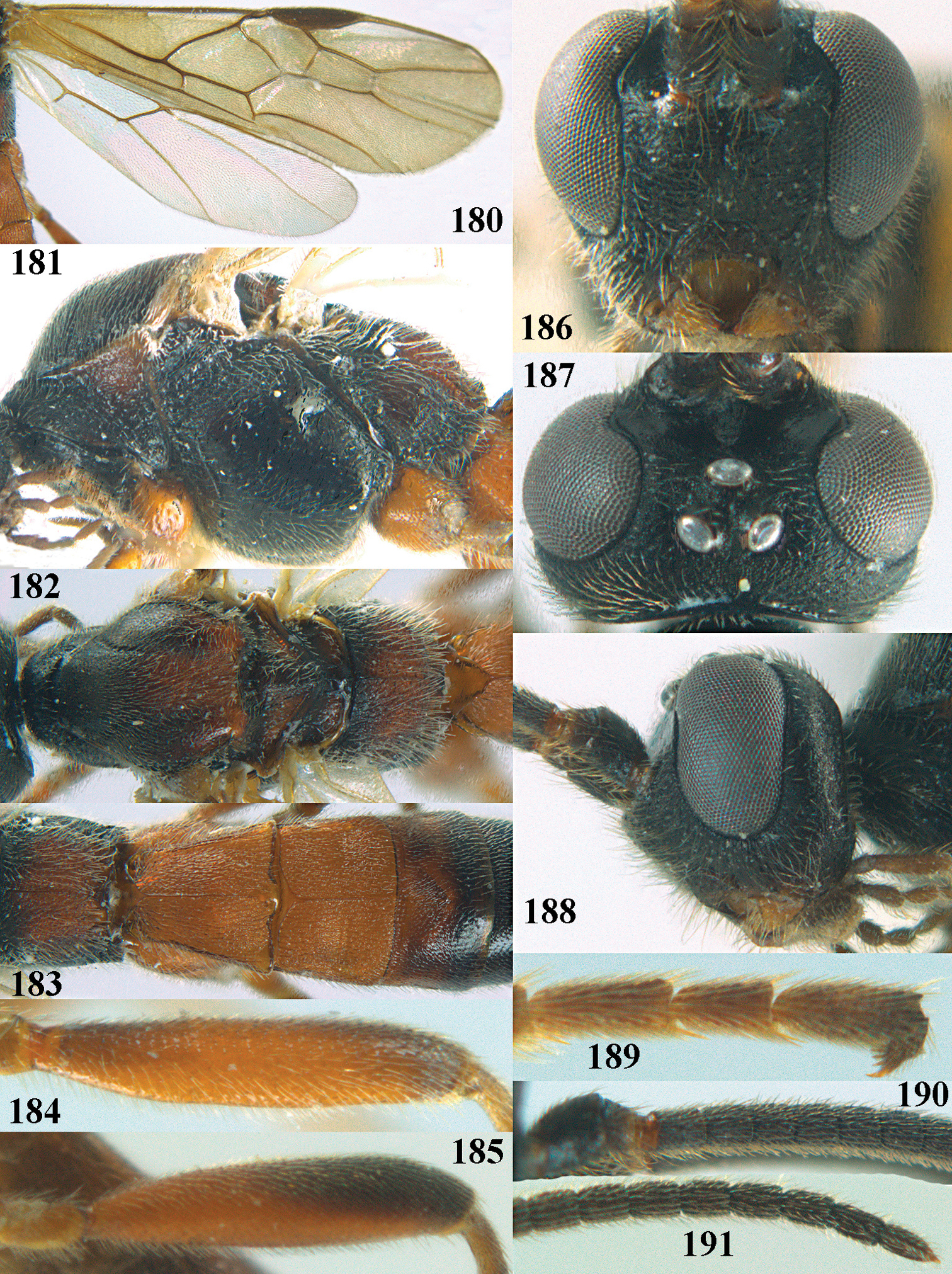 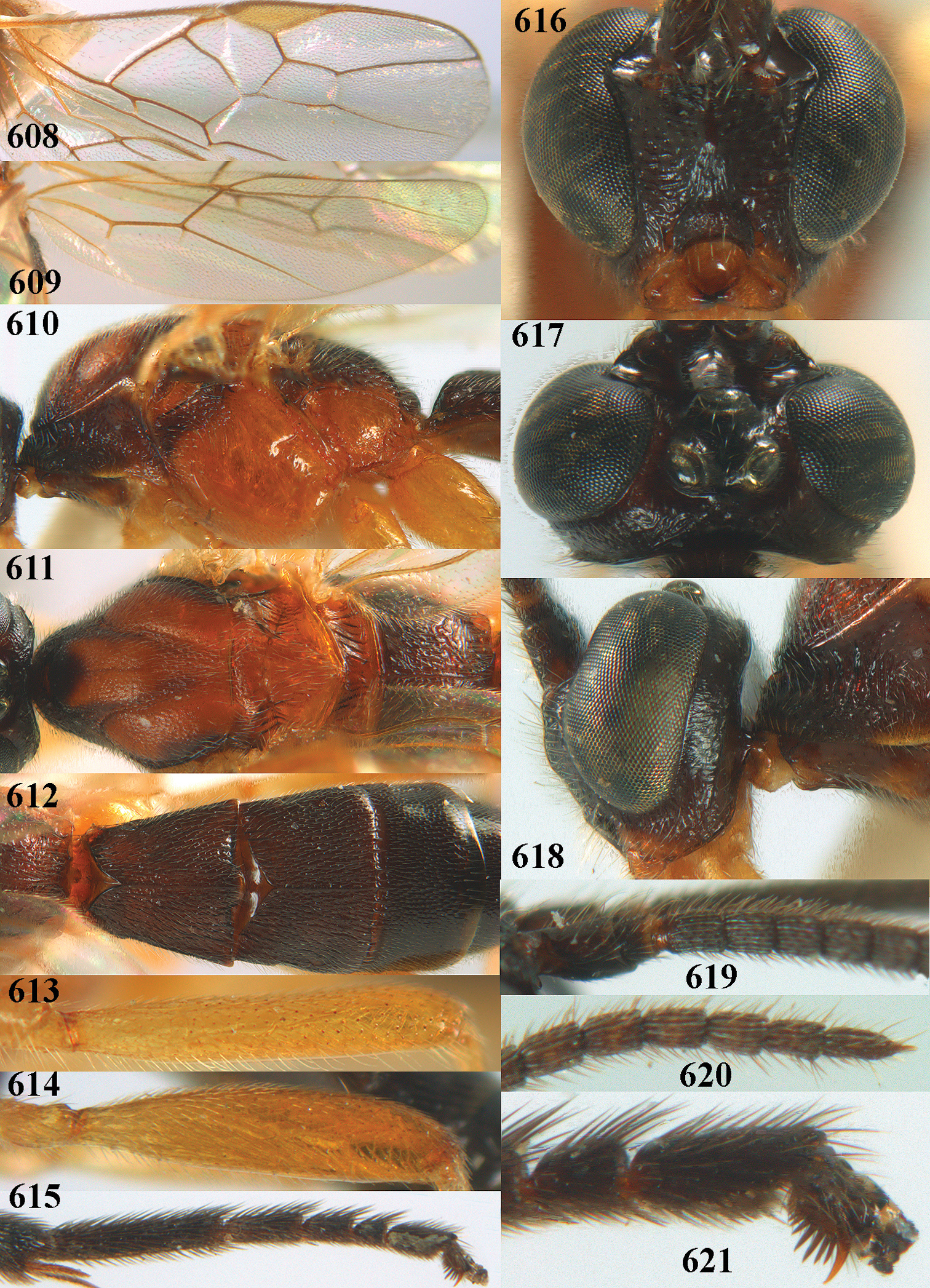 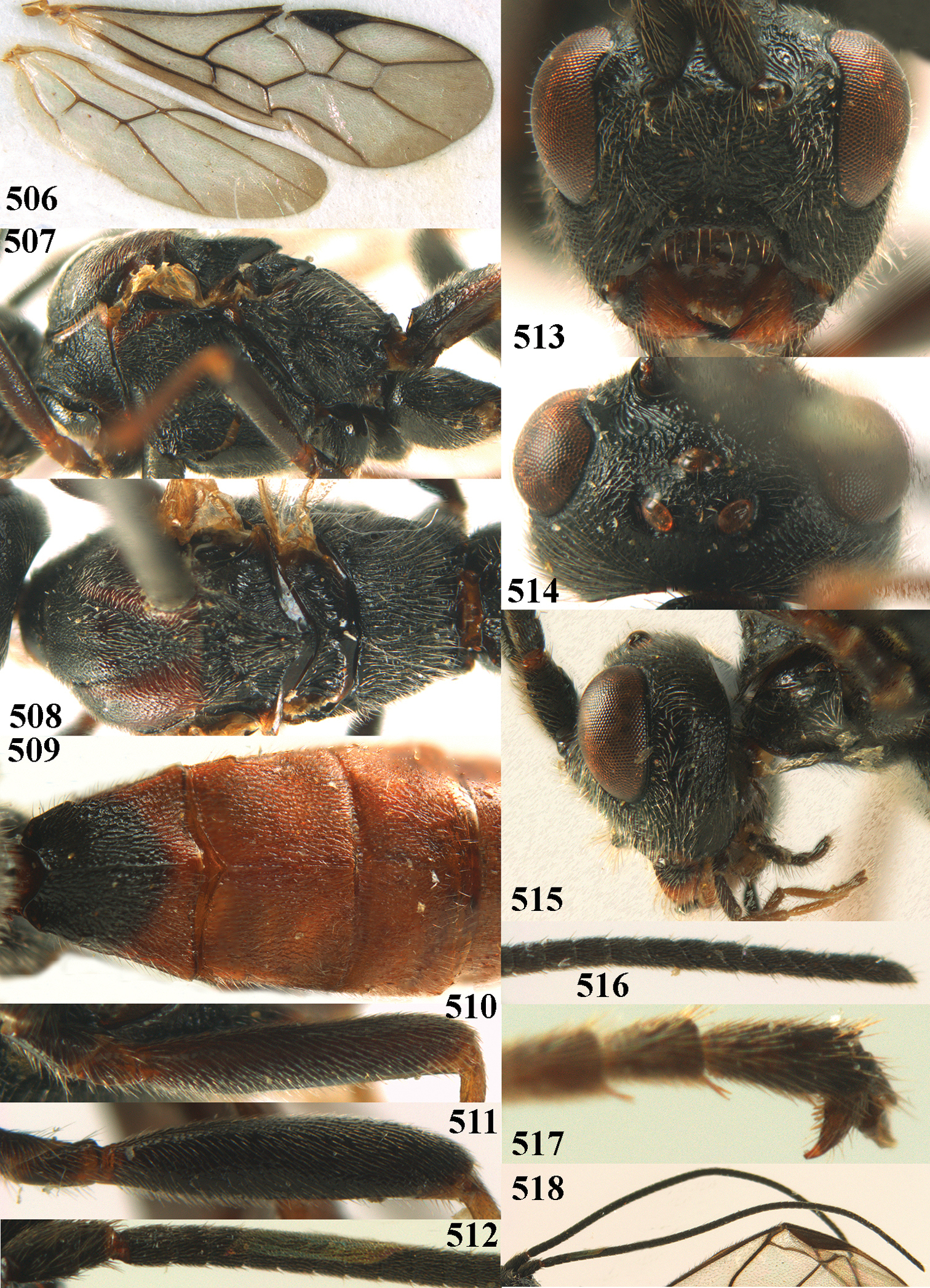 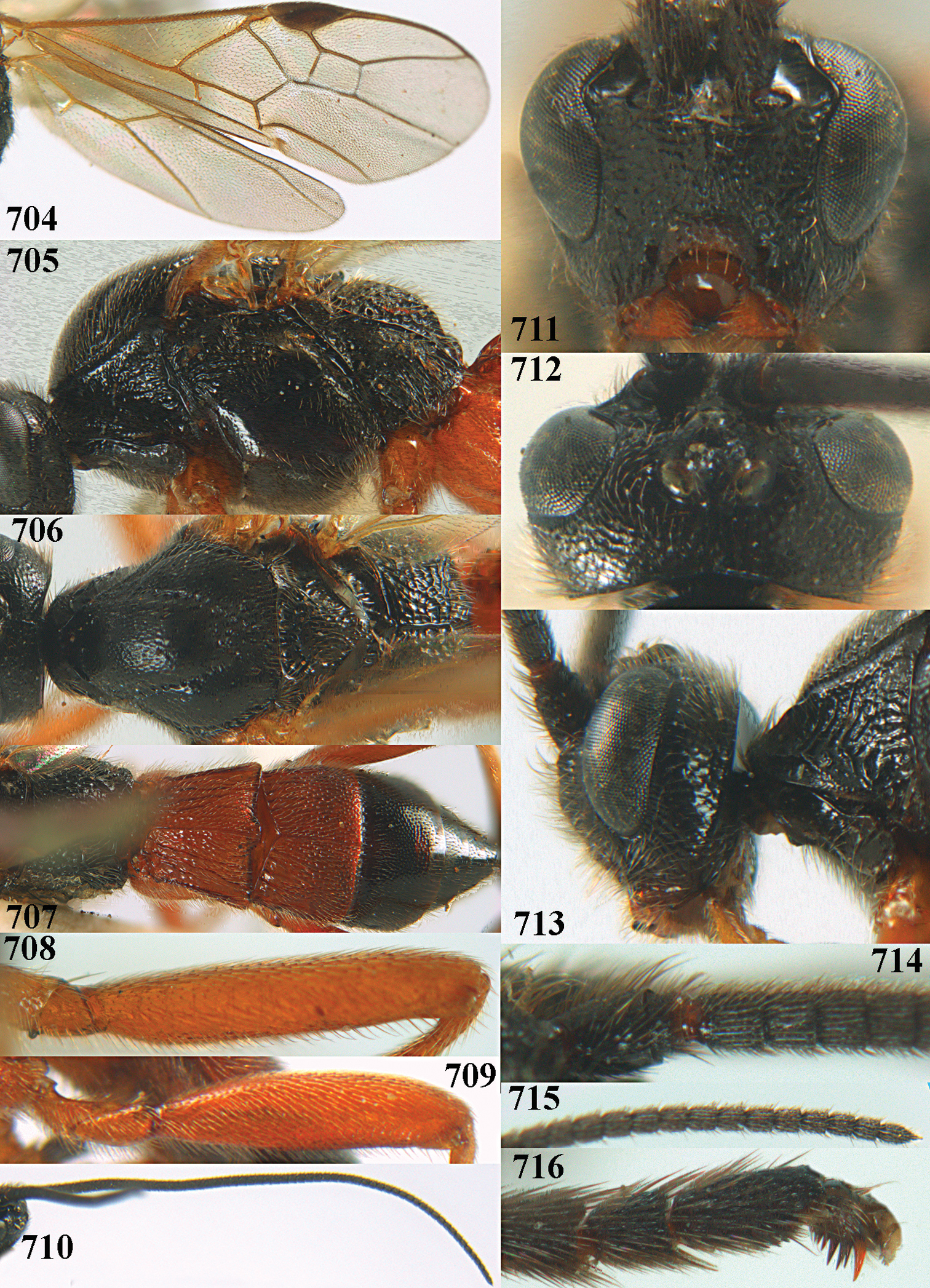 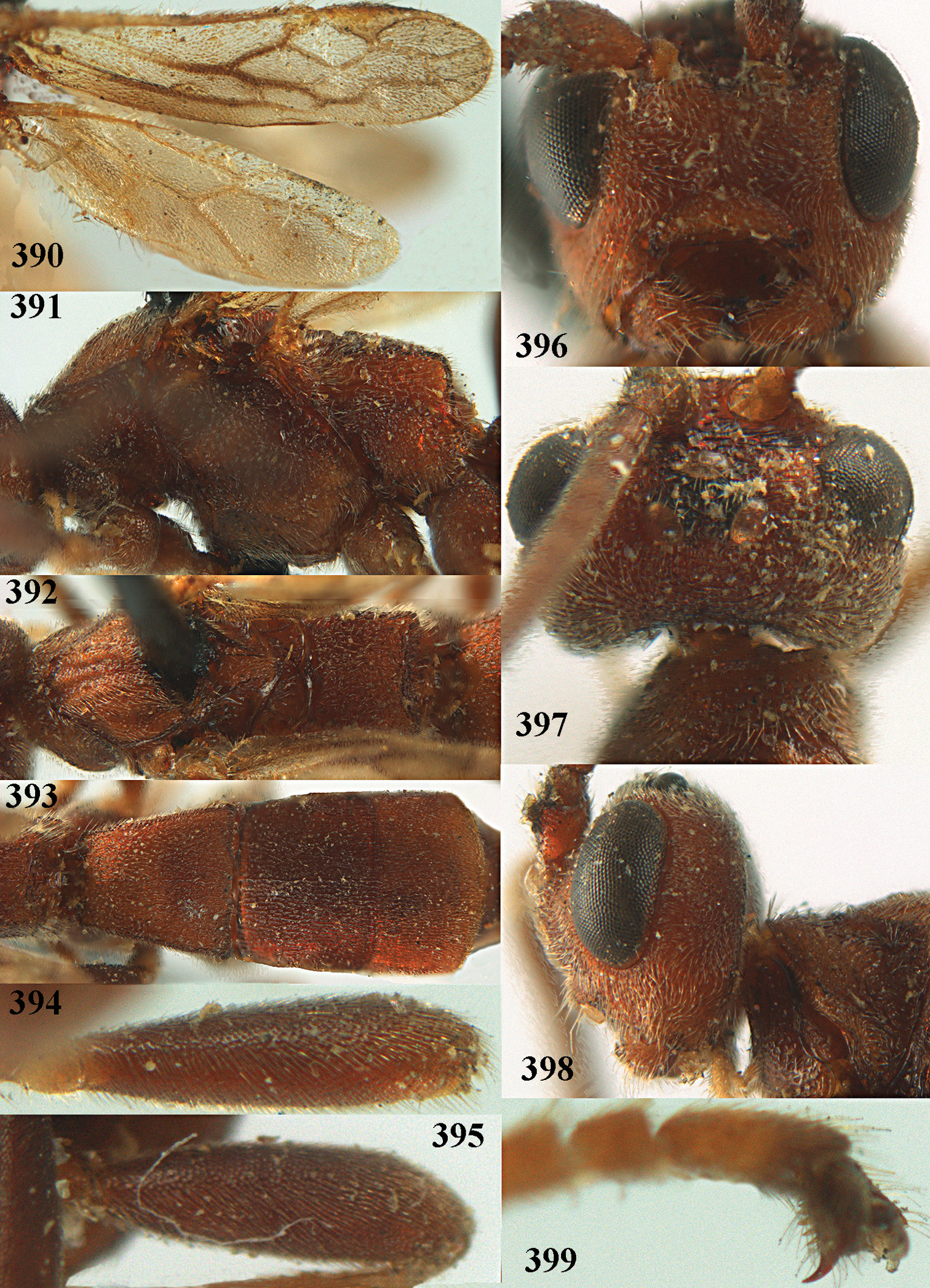 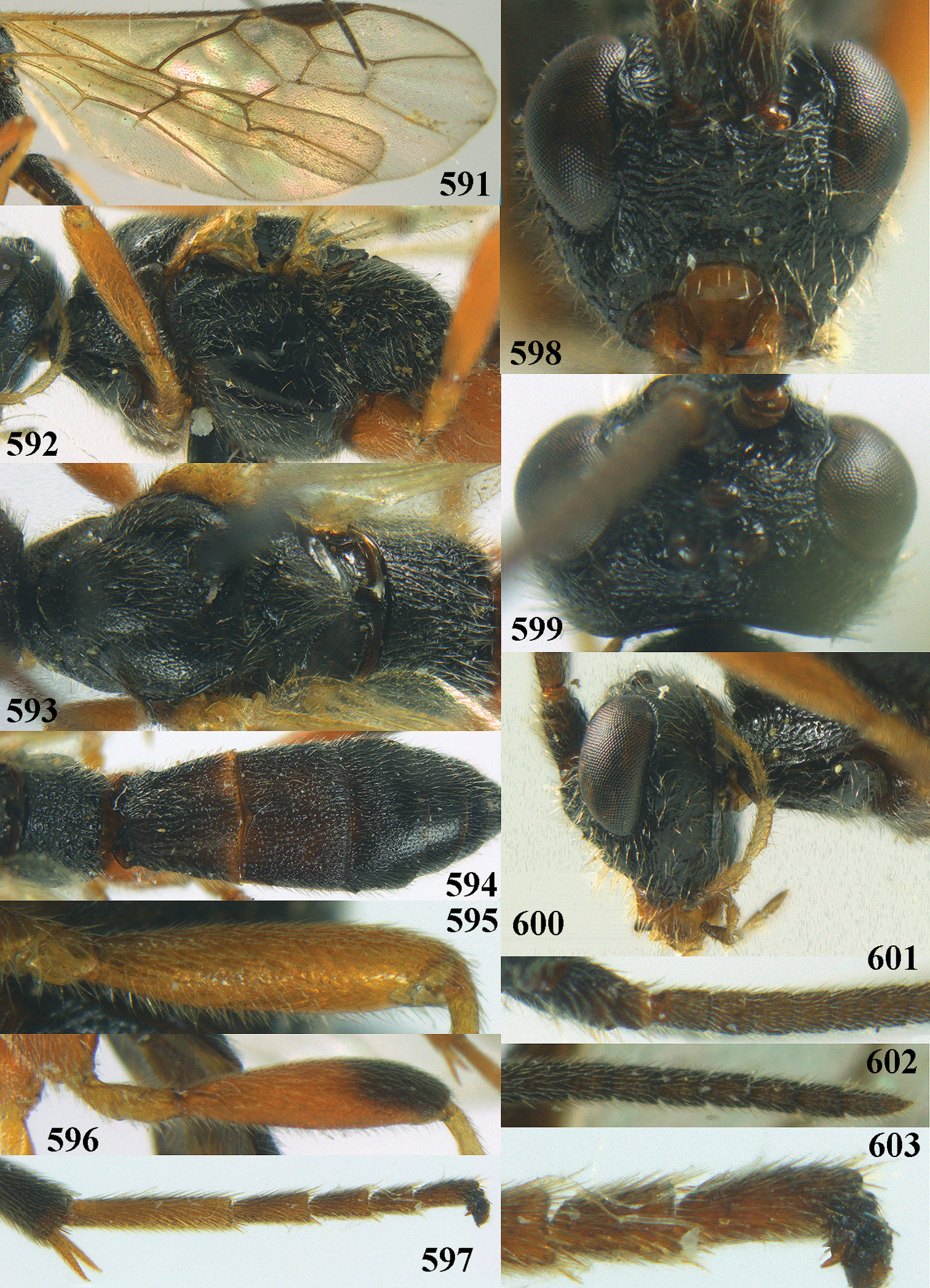 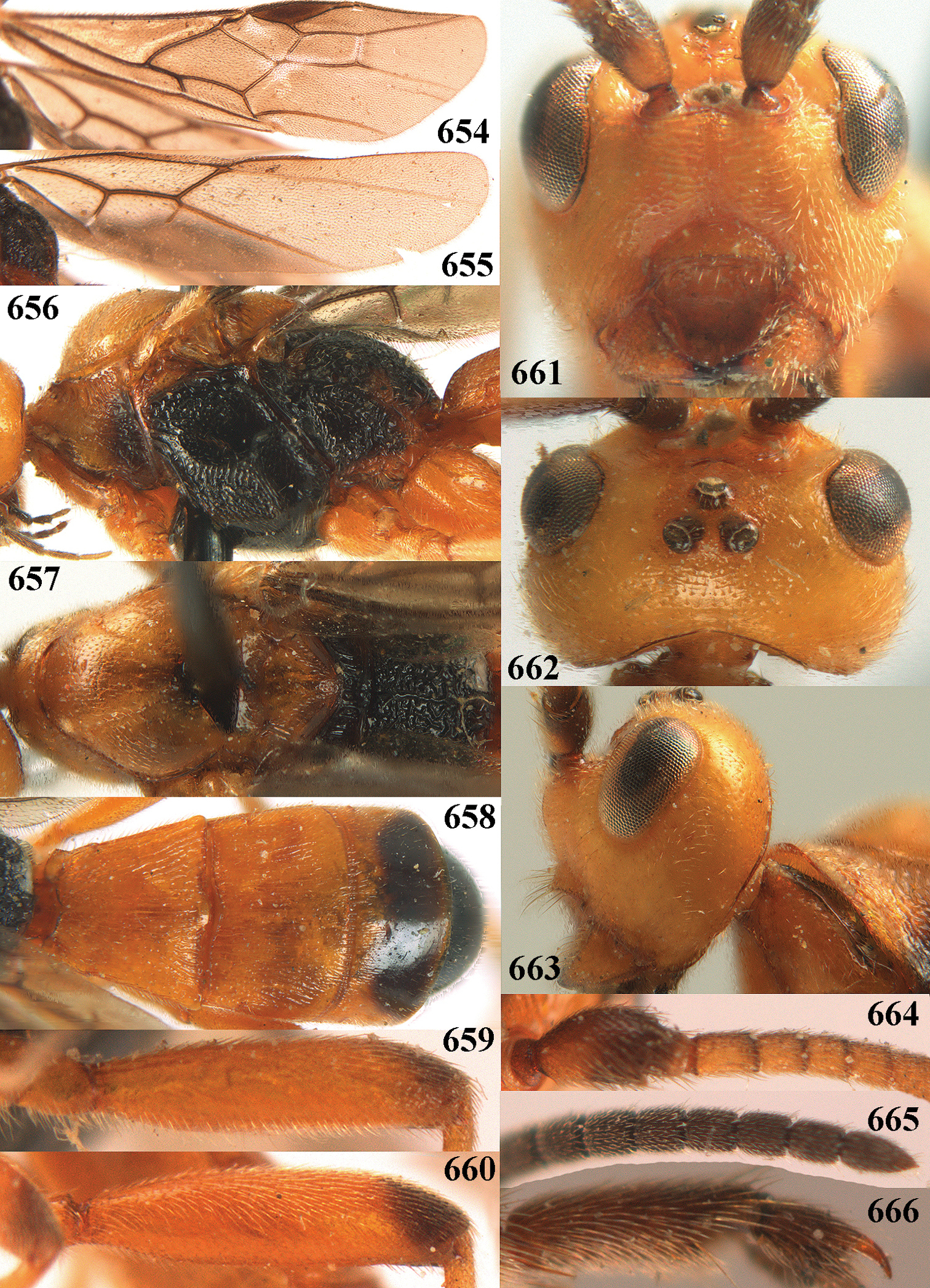 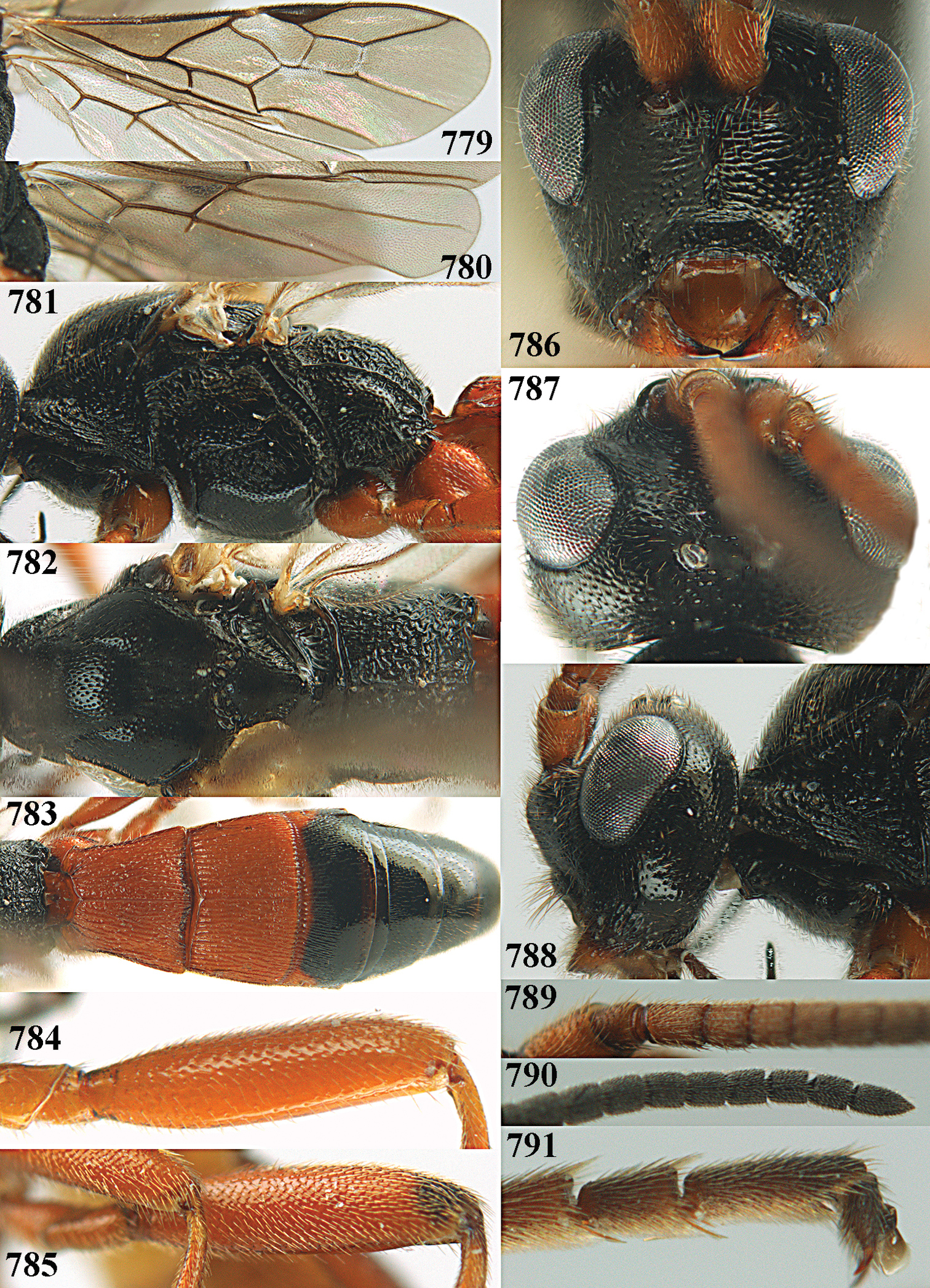 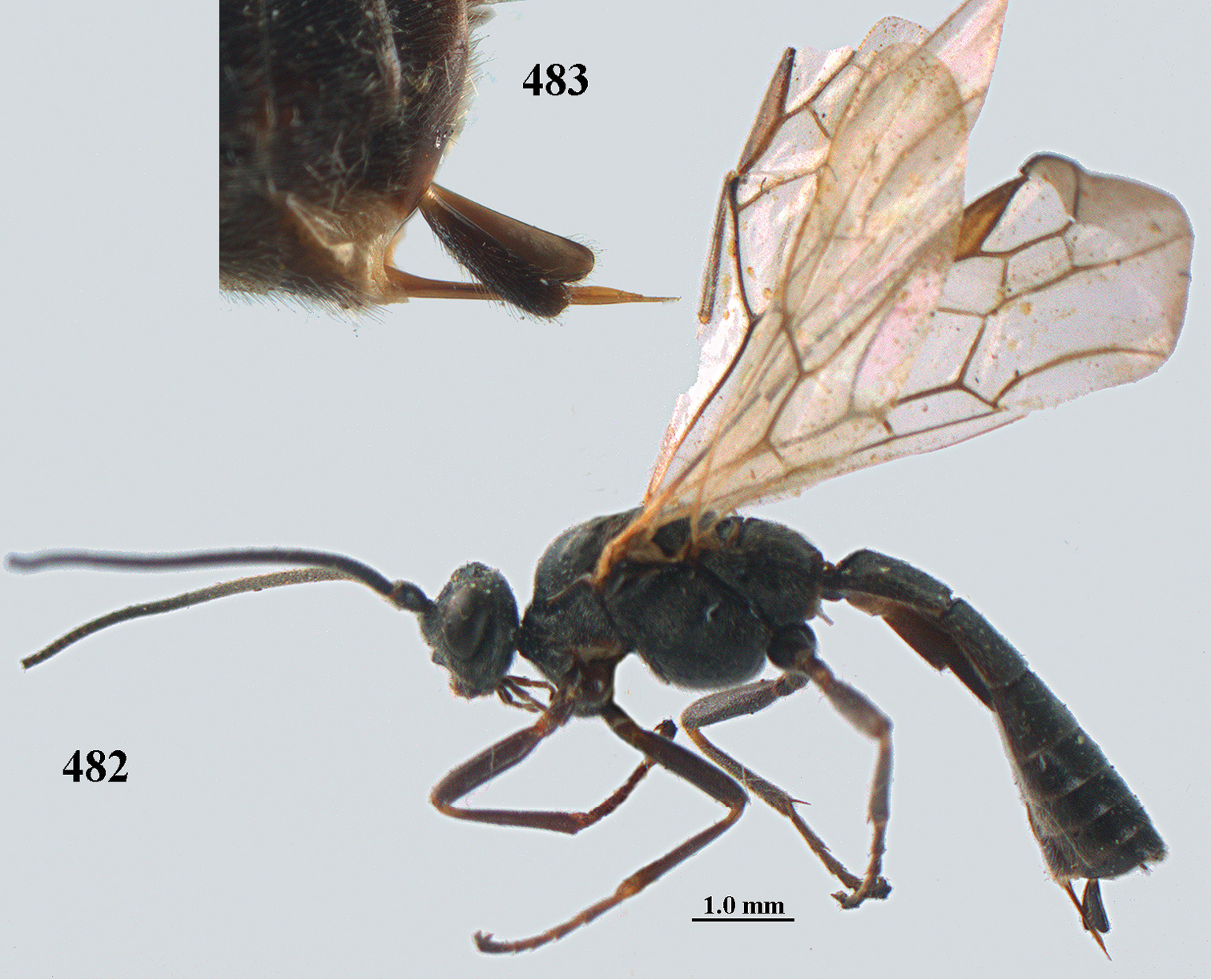