Etymology. The specific epithet flabelliformis   is formed from the Latin flabellum, “fan”, and forma, “shape”, referring to the overall impression of the somewhat evenly separated wing veins, radiating apicad in a fan-like manner.

Remarks. The configuration of the basal portion of 2 A seen in C. flabelliformis   and C. sp. A corresponds with the vein fragment of C. bittaciformis   previously identified as 3 A ( Willmann, 1977: Fig. 2 View FIGURE 2 ) and subsequently with uncertainty ( Willmann, 1989: Fig. 135), indicating that this similarly-placed vein on C. bittaciformis   may also be a portion of 2 A.

The wing of C. flabelliformis   is about four times as long as wide, as is that of C. leahyi   (see bottom wing in Fig. 2 View FIGURE 2 C), C. westae   , and apparently C. sp. A judging by the shape of its preserved portion. This is distinct from the more slender wings of C. brooksi   , length / width about 4.9, and C. bittaciformis   (width not reported, but these appear distinctly long and slender: see Willmann, 1977: Fig. 1 View FIGURE 1 , complete wings of the holotype, and Fig. 2 View FIGURE 2 , incomplete wing of the paratype). These are confidently not simply forewing / hind wing differences, as shape appears reasonably consistent between them (comparable in C. leahyi   and C. bittaciformis   ).

The lengths of complete (or mostly so) cimbrophlebiid wings vary from about 25 to 38 mm: C. westae   ~ 25 mm; C. flabelliformis   , 28 mm; C. leahyi   : ~ 31 mm; C. bittaciformis   , hind wing 31.5 mm and forewing 34.5 mm; C. brooksi   , ~ 38 mm. These differences, however, fall within variation found in the scorpionfly Panorpa communis ( Ohm, 1961)   ; further, where known, hind wings are a bit smaller than forewings. Only the great size differences between that modelled for the incomplete wing of C. sp. A (estimated as> 40 mm long) and the much smaller C. flabelliformis   and C. westae   are here considered meaningfully distinctive, given current knowledge.

The holotype of C. flabelliformis   bears four branches of Rs, unlike those of C. leahyi   , C. brooksi   , and C. westae   , which have five branches. Willmann (1977) found this character to be plastic within C. bittaciformis   (and see P. communis: Ohm, 1961   ), and so this is not considered diagnostic here.

Wing colouration of the Okanagan Highlands species may be separated into three groups: 1), that of the McAbee species C. flabelliformis   and C. leahyi   ; 2), of C. brooksi (Republic)   ; and 3), of C. westae (Republic)   . C. flabelliformis   and C. leahyi   have variations of a general pattern consisting of mostly dark wing, with a series of large, irregular to oval light spots extending along the length of the anterior portion of the wing, touching the anterior margin: the smallest one or two in the basal quarter, a large one at about mid-wing, and a large one between this and the apex. There are various smaller spots along the posterior half of the wing. The preserved portion of C. sp. A indicates that it may belong to this group.

The colouration of the C. westae   wing is somewhat similar to that of the McAbee species, but with more, exaggerated light regions, which extend the length of much of the posterior wing as known, and a further light band apicad the large spot in the corresponding position of the apical-most one of C. flabelliformis   and C. leahyi   . The resultant remaining dark colouration is arranged as a lengthwise zigzag touching the anterior, but not posterior margin ( Fig. 6 View FIGURE 6 C). Much of this colour pattern is evident on regions of the wing not preserved in the single specimen of C. sp. A, which cannot be confidently excluded from this colouration group.

The colour of C. brooksi   is distinctly different from the above, with four dark bands extending from the anterior margin across about 2 / 3 of the wing width to about Cu 2 or 1 A. These are separated by light bands that connect with a light region that extends the length of the posterior portion of the wing. The apical region is preserved as generally light, and may have had complex light colouration in life.

The wing of the Danish C. bittaciformis   has a complex series of light and dark bands and spots ( Willmann 1977: Figs. 1–2 View FIGURE 1 View FIGURE 2 ); the undescribed German species figured by Ansorge (2003: Fig 4 View FIGURE 4. A, B G) has a dark wing densely covered with small light spots. 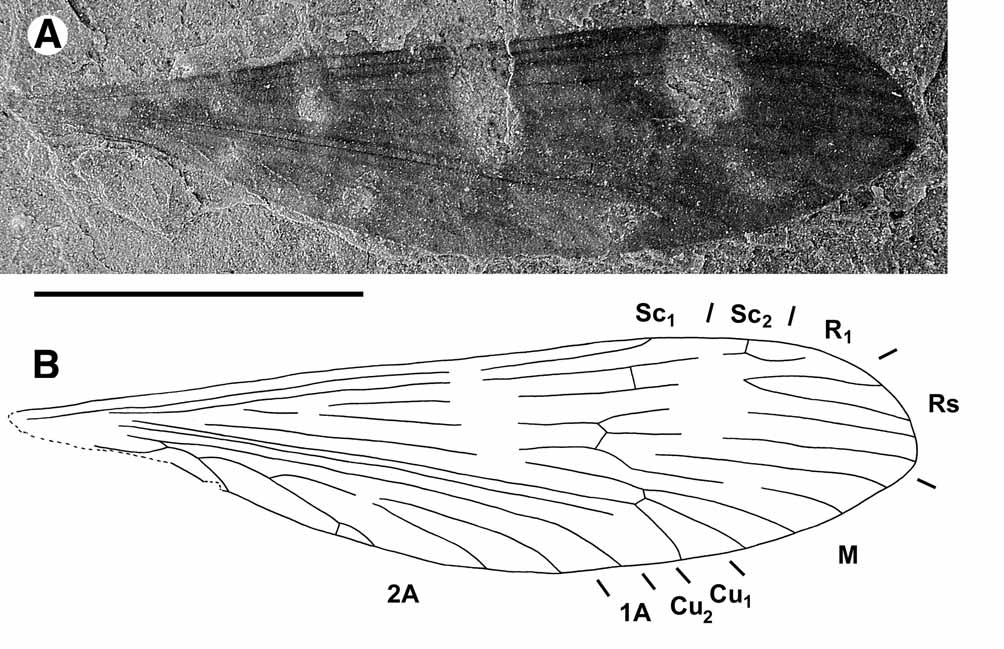 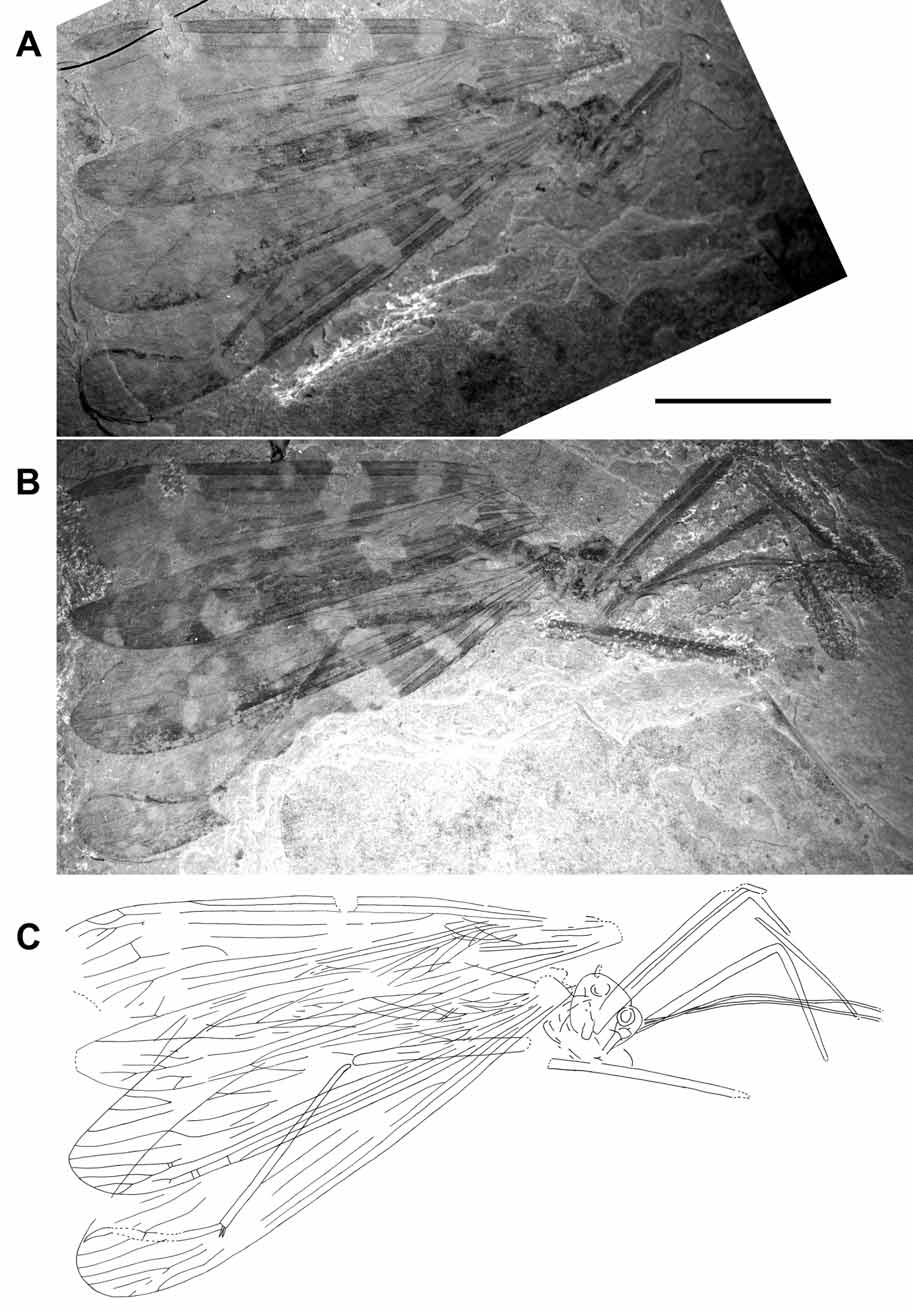 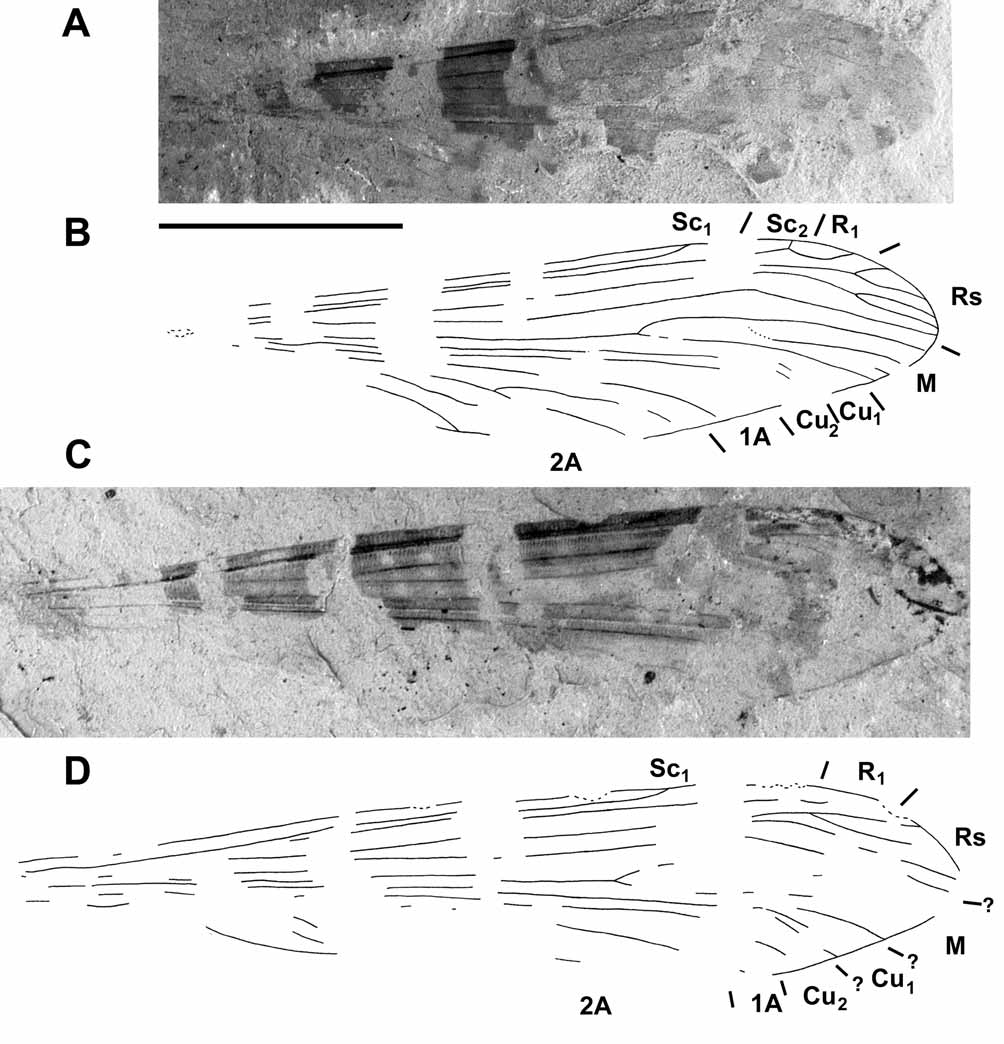