This species is diagnosed from others in East Asia by the size (1.30-1.55 mm), by the proportions (2.20 × as long as wide), by the male frons with a short transverse carina, by the antennal sutures (approximately horizontal), by the setae on the pronotal disc (entirely hair-like), and by the elytral striae devoid of ground vestiture.

Cryphalus morivorus  , described below, is similar and can be distinguished by the characters therein.

Female. Length 1.40-1.55 mm (holotype 1.50 mm). Proportions 2.20 × as long as wide. Frons simple, convex, flat and shining up to the level of the eyes. Antennal club with three straight sutures marked by a mixture of coarse short setae and longer setae with length approximately the same as distance between sutures. Antennal funiculus with four funicular segments. Pronotal colour dark brown, similar to elytra and head. Pronotal profile widest at base. Pronotal margin armed with four or five serrations, irregularly spaced and sometimes partially fused. Pronotal declivity broadly rounded, with approximately 50 asperities. Pronotal disc occupies approx. one third of the length of the pronotum, gently sloped, uniformly weakly asperate. Pronotal vestiture of only gold, hair-like setae. Suture between pronotum and elytra very weakly v-shaped. Scutellum small, triangular. Elytra 1.85 × as long as pronotum, dark brown, broadly rounded with no clear transition to the declivity. Elytral texture mostly smooth, with punctures from the ground vestiture much smaller than the diameter of the strial punctures, and interspaces smooth. Striae visible as rows of punctures, with no scale-like setae between strial punctures. Interstrial bristles erect, hair-like, slightly flattened with pointed tips, those near the elytral suture are shorter and broader than those in lateral regions. Interstrial ground vestiture tridentate, 1-2 × as long as wide, with a weak iridescence. Protibiae and protarsi with only simple hair-like setae. Mesocoxae narrowly separated, only slightly more than metacoxae. Proventriculus not examined.

Male. Similar to female except: Length 1.30-1.50 mm. Frons with a smooth transverse carina above the level of the eyes. Pronotal declivity with asperities slightly more sparse and slope is straight rather than broadly curved. Protibiae and protarsi with coarse, long setae on the proximal face, near the apex. Last abdominal ventrite clearly emarginated. Proventriculus not examined. Aedeagus not examined.

Frequently misspelled as " exignus  ", with the first instance of this misspelling in Niisima (1909). The name Cryphalus pilosus  Sasaki, 1899 has been treated as a junior synonym of C. exiguus  (Wood and Bright 1992; Alonso-Zarazaga et al. 2017), based on the apparent synonymy by Niisima (1909). Upon inspection of the referenced material ( Sasaki 1899), the synonymy is deemed to be a misinterpretation. The original publication, in Japanese, describes a pest of mulberry with the tentative identification as " Hylesinus  (Xlechinus) pilosus  ?" [Sic], presumably referring to Xylechinus pilosus  (Ratzeburg 1837) ( Scolytinae  , Hylurgini  ). There was no type material deposited or any indication that this was intended as a new species. Niisima’s remark was intended to correct the identification, rather than suggesting that the two species names are synonymous.

The original description ( Blandford 1894) indicates that the pronotum contains scale-like setae ( “… with a thin covering of scales and hairs"). This is not visible on the holotype and any other specimens seen from northern and central Japan. Crucially, this is the opposite of a character state which diagnoses this species (having only hair-like setae). We consider this an error in the species description rather than either damage or accidental replacement of the holotype. The weakly asperate texture of the pronotal disc can give the illusion of scales in non-diffuse lighting. Another diagnostic character for C. exiguus  is the clearly visible striae devoid of ground vestiture, which is included in the original species description.

We did not see any specimens representing this species in China (see remarks for C. morivorus  ), but it is likely to be present in the north-eastern regions. The key by Tsai and Li (1963) clearly indicated prominent striae, suggesting specimens of C. exiguus  were used when compiling the key and comparing to C. manschuricus  . 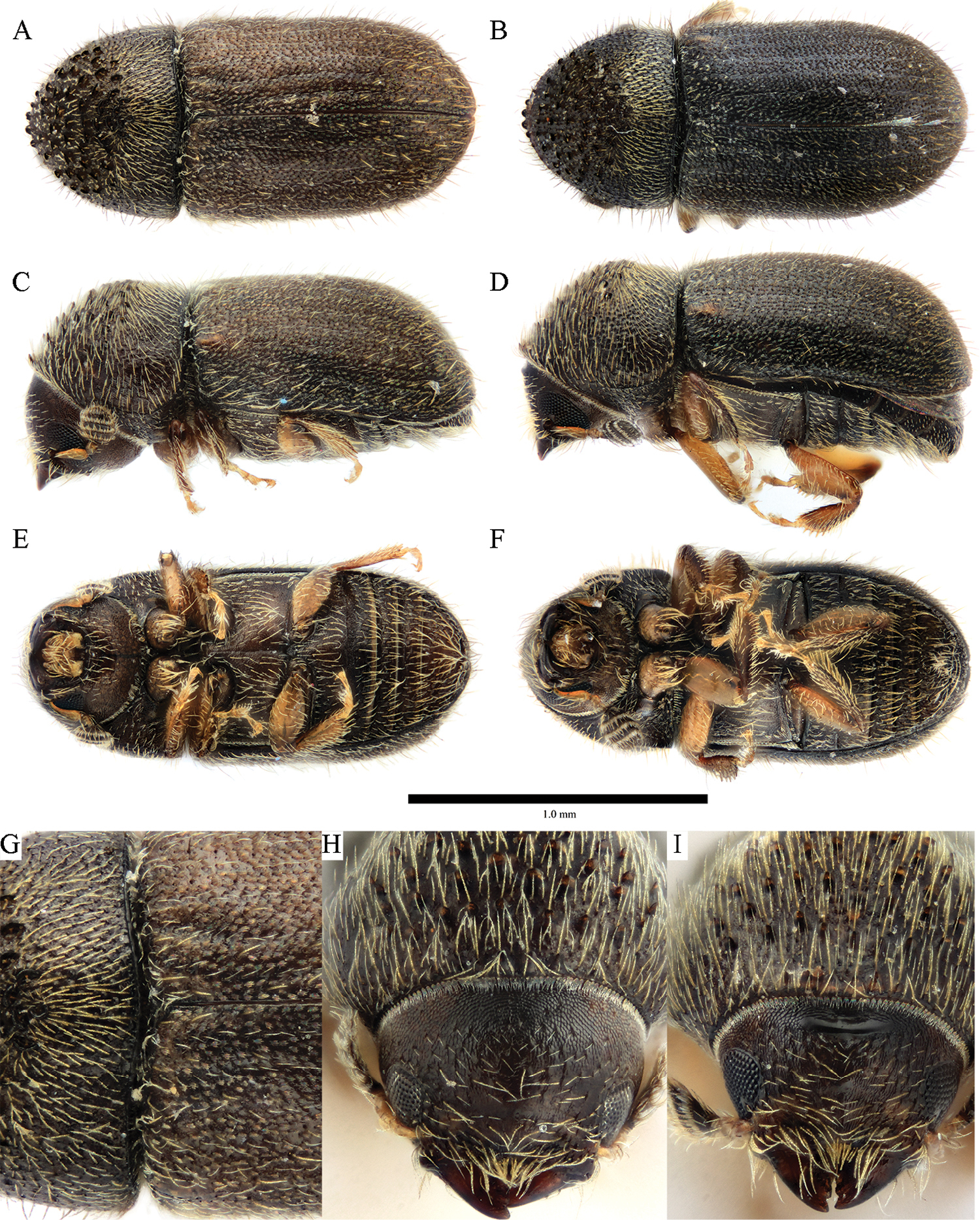