The family Aphanipathidae   (nine genera, 22 species) is characterized by considerable morphological variation in the growth form of the corallum. Colonies may be branched irregularly, pinnulate or flabellate, or, possibly, unbranched (see below). With a few exceptions, the spines are conical with distinct tubercles (knob-like or conical protuberances) on their surface, and do not develop bifurcations or multiple lobes at the apex, as seen in the Antipathidae   . The polyps tend to be slightly elongated in an axial direction and up to 1.3 mm in transverse diameter. Limited information is available on the size and shape of the tentacles in living colonies; however, there is some evidence that they are similar to those of the Antipathidae   , but somewhat shorter, more equal in size, and with a more rounded apex (D.M.O., personal observation). The family is divided into two subfamilies – Acanthopathinae (four genera) and Aphanipathinae (five genera) – distinguished based on the relative development of the polypar spines ( Opresko, 2004).

Based on morphological analyses, eight species, representing four genera (two from each subfamily), were obtained for sequencing, of which five could be referred with certainty to valid nominal species ( Table 1 & Supporting informaton Table S1). Based on both the mt-contig and the nuc-contig phylogenies, the Aphanipathidae   constitutes a polyphyletic assemblage. Specifically, Acanthopathes thyoides   , Elatopathes abietina   , and Aphanipathes verticillata mauiensis   were scattered throughout the phylogeny; however, in the mt-contig phylogeny, the remaining aphanipathids – including Acanthopathes sp.   (P4- 226-2) – clustered together (BS and BPP: 100) in three highly divergent subclades (i.e. clades separated by long branch lengths) whose relationship to one another was inconclusive. The mt-contig phylogenies offered little insight into the relationship of Acanthopathes thyoides   and E. abietina   relative to other families, probably due in large part to long branch attraction, a phylogenetic artefact that is a conse- quence of mutational saturation and/or lineage heterogeneity in the substitution process, whereby rapidly evolving taxa are ‘attracted’ to other long branches or extremely divergent outgroups ( Felsenstein, 1978; Bergsten, 2005; Philippe et al., 2005; Lartillot, Brinkmann & Philippe, 2007). In the phylogenies rooted to the Leiopathidae   , Acanthopathes thyoides   was sister to the remaining taxa, albeit with low support (BS: 69.3–72.4; BPP: 50–76; placement of Acanthopathes thyoides   in the PhyloBayes analysis of the full mt-contig alignment was largely unresolved). Elatopathes abietina   grouped sister to the S + M complex, although with conflicting support from the different tree-building algorithms (BS: 56.7–59.4, BPP: 62–100; using PhyloBayes, BPP = 100 for the full mt-contig alignment but was largely unresolved for the Gblock-edited mt-contig alignment). Bayesian analysis of the full (BPP: 93) and GBlocks-edited (BPP: 95) alignment of igrN alone resulted in strong support for E. abietina   grouping sister to the S + M complex. Interestingly, we observed that the cox   1 gene of E. abietina   contains a group I intron, which is also seen in species of the S + M complex (discussed in more detail below); however, additional aphanipathids have not been tested for the presence of a group I intron (Supporting information Table S8). Conclusions regarding the monophyly of the family will have to wait until sequence data from Distichopathes Opresko, 2004   and Rhipidipathes Milne-Edwards & Haime, 1857   (Acanthopathinae), and Asteriopathes Opresko, 2004   , Pteridopathes Opresko, 2004   , and Tetrapathes Opresko, 2004   (Aphanipathinae) are obtained.

As noted earlier, Aphanipathes verticillata mauiensis   formed a strongly supported sister relationship with the Antipathidae   in all mtDNA and nuclear DNA phylogenies. However, given the high genetic distances separating Aphanipathes verticillata mauiensis   and the Antipathidae   , the exceptionally tuberculate spines of A. v. mauiensis   that suggest an affiliation with the Aphanipathidae   , as well as the lack of molecular data for the antipathids Allopathes Opresko & Cairns, 1994   , and Pseudocirrhipathes Bo et al., 2009   , we do not advocate reassigning this species to the Antipathidae   at this time. Two additional representatives of the genus Aphanipathes Brook, 1889   were also quite divergent and clustered into two different Aphanipathidae   subclades. Aphanipathes pedata   , collected from the Flower Garden Banks in the northern Gulf of Mexico, grouped with two species of Phanopathes Opresko, 2004   , both also from the northern Gulf of Mexico. While igrN and cox   3- cox   1 sequences differentiated Aphanipathes pedata   from Phanopathes expansa   , their igrW sequences were identical. Aphanipathes   sp. nov. (USNM 1010741, description in preparation), which morphologically appears to be a branched Stichopathes   , clustered with colonies identified as Stichopathes dissimilis   and S. spiessi   .

The genus Stichopathes   is currently classified in the Antipathidae   and encompasses unbranched whiplike black corals that have polyps arranged along one side of the axis. As noted above, our results indicate the genus is polyphyletic, with shallower species grouping with the Antipathidae   and deeper species clustering with the Aphanipathidae   . With respect to the Aphanipathidae   clade, Stichopathes species   group into two divergent subclades: S. dissimilis   (from the North Atlantic) and S. spiessi   (North Pacific) clustered with the new species of Aphanipathes   (from 298 m depth off Molokai, Hawaii) and with Antipathes dichotoma   (from ~ 500 m in the eastern Mediterranean Sea), while S. cf. flagellum   (North Atlantic) clustered with an unidentified Acanthopathes sp.   (Niihau, Hawaii, 263 m). Both S. dissimilis   and S. spiessi   have spines that are distinctly covered with tubercles ( Fig. 6 View Figure 6 ), and Opresko (2004) noted that some other species of Stichopathes   , e.g. S. paucispina ( Brook, 1889)   , have tuberculate spines that ‘superficially’ resemble those of the Aphanipathidae   . Provisional identification of S. dissimilis   was based on comparisons to the spines of the type of S. dissimilis   , both of which are distinctly covered with tubercles; however, some morphological differences suggested that the study specimens might be a different species. Our provisional identification of S. cf. flagellum   was based primarily on similarities in the size of the spines (our specimens had smaller spines) and the thinness of the corallum (as described by Roule, 1905), as scanning electron micrographs of the spines of the type of S. flagellum   were not available. The spines of S. cf. flagellum   were quite different from those seen in S. dissimilis   , being compressed and triangular with tubercles at low density on the former, and more conical, not compressed laterally, and distinctly tuberculate in the latter ( Fig. 6 View Figure 6 ). These findings reveal the importance of minute details (e.g. spine ornamentation) in differentiating taxa and the apparent covergence of an unbranched corallum with polyps arranged uniserially along one side of the axis.

As noted above, Antipathes dichotoma   – the type species of the genus Antipathes   – does not cluster within the larger clade of antipathids, but rather groups with S. dissimilis   , S. spiessi   , and Aphanipathes   sp. nov. in an aphanipathid clade. This particular specimen (USNM 1086470) is small and unbranched, and the skeletal features require further detailed analysis to determine if the spines have microscopic features connecting it to aphanipathids (e.g. the spines of LYM106-5 have only a few rare tubercles). According to Opresko (2003a), all specimens assigned to A. dichotoma   have spines that are smooth-surfaced (i.e. there are no reports of papillose spines) and show no indication of being notched, bifurcated, or multiknobbed at the apex. Antipathes dichotoma   is the type species of the genus and therefore the basis of the family Antipathidae   . Consequently, if sequence data from additional specimens of A. dichotoma   confirm this unexpected phylogenetic position, it may necessitate a reassessment of the current classification of the Antipathidae   and the Aphanipathidae   . Some species now referred to the Aphanipathidae   may have to be assigned to the Antipathidae   , and species currently in Antipathes   may have to be transferred to new genera (and possibly to a new family).

Our results show the Aphanipathidae   as currently defined comprises deeply divergent subclades separated by genetic distances that are more than double those obtained for comparisons within other antipatharian families ( Table 3; Fig. 1 View Figure 1 ), with at least three polyphyletic genera (out of four examined). Furthermore, our phylogenies showed that nested in the aphanipathid clade is a genus ( Stichopathes   ) with a corallum morphology (unbranched, whip-like) not captured by the range of characteristics described for the family. It seems clear that the current diagnosis for the family needs revision, and that some genera are defined too broadly, or have descriptions based on morphologically plastic characters.

In a majority of phylogenetic reconstructions, the relationship of the three subclades of Aphanipathidae   to one another was inconclusive. The most wellsupported tree, the mt-contig based on full alignments and analysed with MrBayes, showed the Stichopathes dissimilis   + S. spiessi   + Aphanipathes   sp. nov. + Antipathes dichotoma   subclade grouping sister to the S. cf. flagellum   + Acanthopathes sp.   subclade (BPP: 72), and the Aphanipathinae grouping sister to these subclades. The branches leading to S. cf. flagellum   and Acanthopathes sp.   were quite long, and thus this relationship may change with the addition of more closely related taxa. 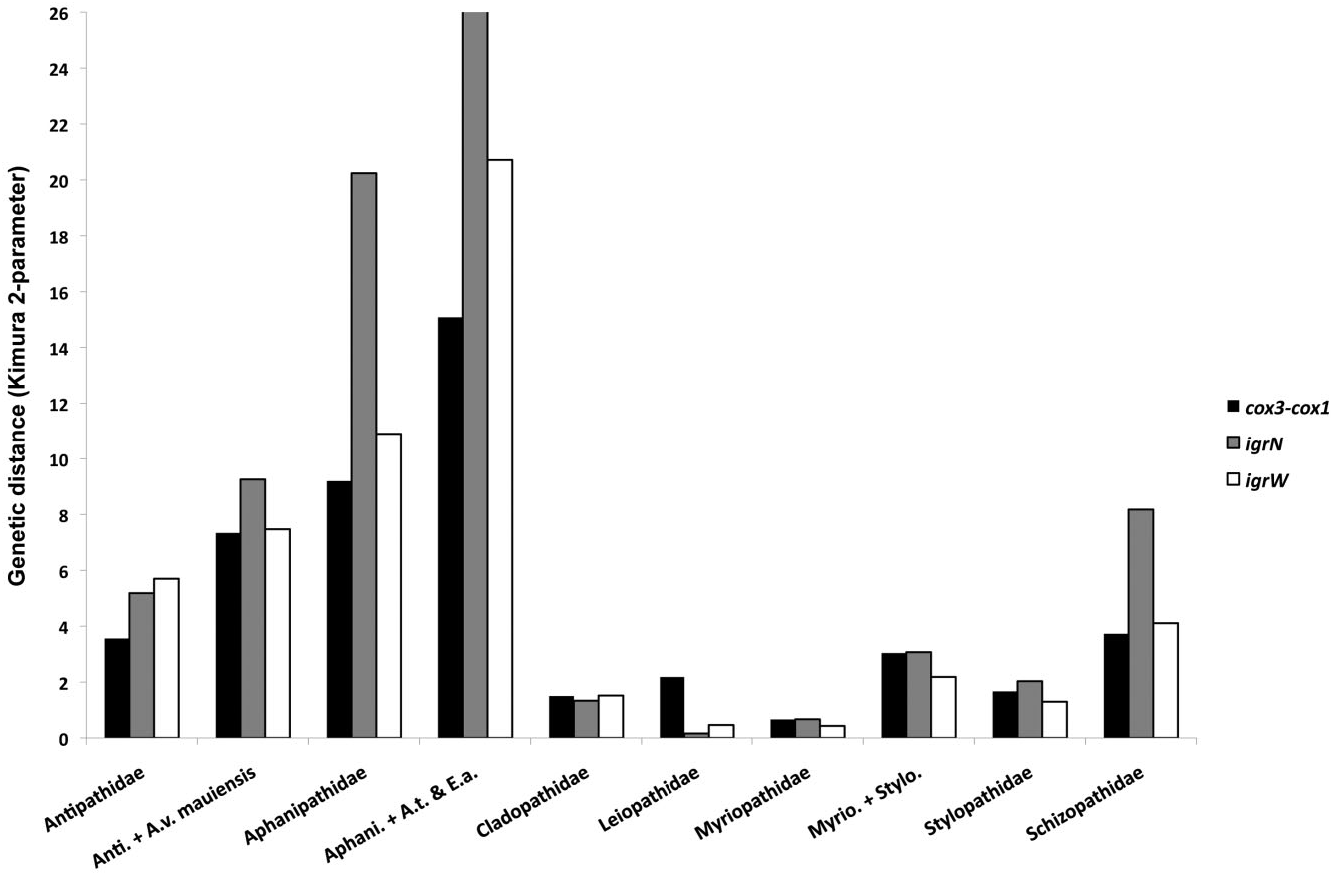 Figure 1. Interspecific genetic distances (based on the K2P) within families (or select clades – see text) for the three mitochondrial gene regions. The highest genetic distance estimate obtained was for the Aphanipathidae + A.t. and E.a. using igrN (26.06%). The IGR (intergenic region) separating cox3 and cox1 (i.e. igrC) was removed prior to analysis. Alignments include indels. A.v., Aphanipathes verticillata; A.t., Acanthopathes thyoides; E.a., Elatopathes abietina. See Table 3 for details on which taxa were included/excluded in the distance estimates for each family.