Notes. Say (1834) described E. soleatus   from Indiana, not Michigan as stated by Clark (1963) and Downie and Arnett (1996). This description and locality were republished posthumously ( Say 1839). LeConte (1853) recorded the species from Michigan, which was repeated by Candèze (1859) and seems to be the source of the erroneous interpretation. This species is widespread through much of the southeastern United States, with specimens seen from Kansas to eastern Texas, to Florida and north to New Jersey, southern Michigan, Indiana and Missouri. Specimens misdetermined as I. soleatus   by Horn (1894) were recorded at San José del Cabo, Baja California, collected by Xantus de Vesey ( Michelbacher and Ross 1942). Two of these specimens in the Horn Collection are each labeled from “Cal.” and have a yellow square, indicating ‘Lower California’. These specimens represent D. pericu   .

There is no type or syntype of D. soleatus   in the Museum of Comparative Zoology, where most known remnants of the Say collection are located and where most of his recognized remaining types are known to reside ( Lindroth and Freitag 1969, Mawdsley 1993, Prena 2013). Although John Lawrence LeConte stated in a letter to Alexander Agassiz that his collection “contains specimens carefully compared with those described by Say” ( Darlington 1961), none of the elaterids in the LeConte collection are known or recognizably Say’s specimens. In 2013 a specific search was made for Say’s elaterid specimens in the Say, T. W. Harris, F. E. Melsheimer – D. Ziegler, J. L. LeConte and G. H. Horn collections at the MCZ, and though candidate syntypes for other elaterid species were found, there were none for E. soleatus   .

Say sent beetle specimens to some of his European correspondents, including elaterids to P. M. F. A. Dejean ( Dejean 1826, Weiss and Ziegler 1931, Lindroth 1955, Lindroth and Freitag 1969, Prena 2013), with specimens of some of his non-elaterid species known to exist in the collections of other correspondents such as Germar, Winthem and Barabino. Prena (2013) found Say weevil syntypes sent to Germar now in the Museum für Naturkunde, Berlin. Most of Germar’s elaterid collection went to his nephew Schaum, others were held by Klug, with both sets acquired by Candèze (1857). Seven Say’s species were listed by Sturm (1843) as in his collection, with these specimens possibly obtained in exchanges from Germar or Dejean. One of these species, Elater bellus Say   , was previously listed as a Melsheimer species ( Sturm 1826). No specimens of E. soleatus   were found in the ZMHB (B. Jäger, in litt.; pers. observ.), and the Sturm specimen was not found in the ZSM (M. Balke, in litt.).

Lindroth (1955) concluded that ground beetle ( Carabidae   ) specimens in European collections bearing green labels with “Say” written (see Fig. 3 View Figures 1-4 ) could be considered syntypes. Searches for potential Say’s elaterid specimens in the Dejean or other collections should focus on either Say’s or Dejean’s labels indicating the specimen came from John Eatton LeConte, and such specimens could also be considered for primary type designation.

Ischiodontus oblitus Candèze, 1859   was based on a single specimen “Du sud des États-Unis ”, and beginning with Horn (1878) was regarded as a synonym of D. simplex   (e.g. Henshaw 1885, Candèze 1891, Schwarz 1906, Schenkling 1925). The female holotype of I. oblitus   in the Natural History Museum, London, was labeled by M. C. Lane in 1964 ( Fig. 19–21 View Figures 19-21 ). Candèze made available many names originally used by Dejean, which in this case is Monocrepidius oblitus   , a nomen nudum in Dejean’s (1833, 1836) last two catalogs and Sturm (1843). The labels attached to the specimen ( Fig. 21 View Figures 19-21 ) document important points in its individual history. Of particular note is the small green rectangle with the handwritten “Say” that is consistent with those seen on carabid specimens ( Lindroth 1955, Lindroth and Freitag 1969). However, such labels were commonly used by early 19 th century European entomologists and often simply indicated the source of a given specimen (J. Prena, in litt.). The handwriting observed is also consistent with that of Say as seen on labels at the MCZ and illustrated by Horn and Kahle (1935 –1937), although Say’s handwriting was very similar to that of both Harris and Melsheimer, all using a cursive style common in the early 1800s. The large green rectangle is a typical Dejean label ( Horn and Kahle 1935, Lindroth 1955) and has the name that Dejean gave to the specimen. This label states that the specimens originated from North America and from J. E. LeConte.

Since J. E. LeConte never visited Indiana, an Ischiodontus oblitus   specimen may have come from his family rice growing plantation “Woodmanston” in Liberty County, Georgia ( Gray 1883, Barnhart 1917), now the LeConte-Woodmanston Plantation and Botanical Gardens (2016). The specimen may have been given to Dejean by LeConte, who sent and personally delivered “environs six cents espècies de Coléoptères” [ca. 600 species] ( Dejean 1825), or “800 species from Georgia ” ( Dow 1914, Essig 1931). LeConte may have also given examples of Say’s species, if not Say examined specimens, to Dejean when visiting him and A. Boisduval early in 1828 ( Dejean 1828, Sorensen 1995), six years before the E. soleatus   description ( Say 1834) was first published. Interestingly, Tyson Stroud (1992) wrote of an animosity between LeConte and Say. This rivalry derived from Say’s accusation that LeConte did not properly promote American science by ignoring naming priority by Say and others, and that he instead sent specimens to taxonomists in Europe for identification and description. The strained relationship between LeConte and Say occurred around the time of the Paris trip, which temptingly suggests that this specimen was part of a personal intrigue between two famous founders of natural history in the United States, and involving Count Dejean.

Dejean’s elaterids, including Say and LeConte specimens, found their way to La Ferté, then to E. C. A. Candèze ( Candèze 1857), and then to E. Janson and the Natural History Museum via F. D. Godman ( Arrow and Hampson 1906; Godman 1915; Hayek 1973). However, some early specimens are known to occur in other museums ( Essig 1931; M. Ivie, in litt.), especially the Museo Regionale di Scienze Naturali, Turin, where Dejean’s cebrionines are located. The convoluted history of various parts of the Dejean elaterid collection and the known exchanges, purchases, and gifting of specimens among the early 19th-century naturalists requires taxonomic due caution with regard to presuming that any given single specimen of a species may be the only remaining original representative of that taxon.

Dejean did not routinely accept published nomenclatural priority so that, at least with elaterids, his determination labels included the original name as he received them from correspondents and a new name that he gave on the label and in his catalogues ( Dejean 1825; Lindroth 1973). Dow (1913) wrote of J. E. LeConte being influenced by Dejean “who slighted many species named by Say and renamed them, alleging that he could not read the English descriptions.” Concerning this particular specimen in the BMNH, Dejean evidently did not write Elater soleatus   on the label ( Fig. 21 View Figures 19-21 ) after the original description of the species was published ( Say 1834) or after it was republished ( Say 1839). This different label treatment may have been a factor in causing Candèze to accept Dejean’s name and redescribe the specimen as I. oblitus   , and obscure the origin of the specimen. Candèze frequently adopted Dejean’s elaterid species names and subsequently made them available either in their original or new combinations. Although Candèze may not have been aware of Say’s (1834) original description of E. soleatus   , he knew of Say’s (1839) posthumous republication of the description; yet, he followed J. L. LeConte (1853) and treated “ Dicrepidius soleatus   ” as incertae sedis.

The label evidence suggests that the holotype of I. oblitus   was a gift to Dejean from J. E. LeConte. Yet, the presence of the Say label, apparently in Say’s hand, the known exchanges between Say and Dejean, the history of the collections of both men, and Dejean’s predilections against using Say’s taxonomic names suggest the potential that this specimen could have originally been sent by Say. The morphology of this specimen is consistent with LeConte’s (1853) interpretation of the species and the regarding of both names as synonymous by Horn (1878). Despite the equivocal provenance of the specimen, there is no other known historical specimen available ( ICZN 1999, Art. 72.4.1.1) to select as a lectotype of E. soleatus   . Yet, there remains a reasonable possibility that a syntypical Say specimen of E. soleatus   may be found. Therefore, in accordance with Art. 74 and given the conspecificity determined for I. oblitus   and E. soleatus   , and the nomenclatural need to establish a firm identity for E. soleatus   without meeting the conditions for designation of a neotype ( ICZN 1999, Art. 75), this Dejean specimen is here designated the lectotype of E. soleatus   . The designation of I. oblitus Candèze, 1859   as a subjective synonym begins with Horn (1878), but it now becomes an objective junior synonym of E. soleatus Say   and is consistent with ICZN Art. 72.6. 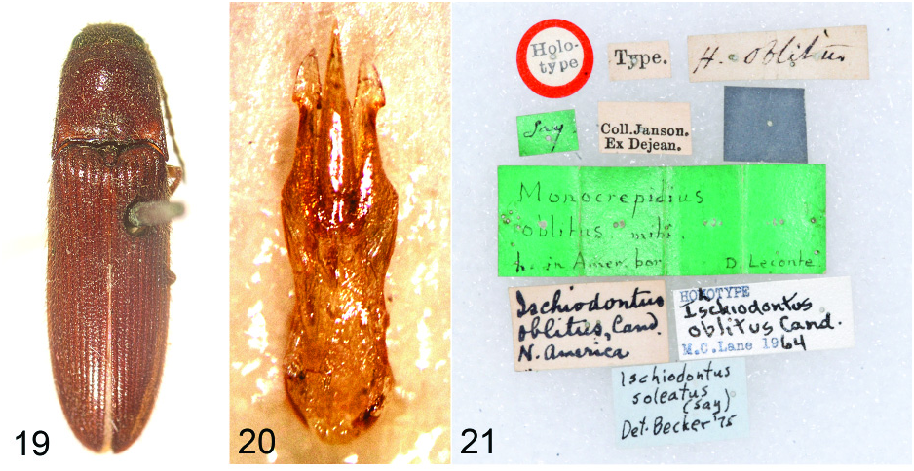