Differential diagnosis. The only other species of Trionymus   so far known from Japan, T. kobotokensis Kanda, 1959   , can be relatively easily distinguished from T. okiensis   sp. nov. using the identification key below.

Outside Japan, T. okiensis   sp. nov. is quite similar to T. frontalis McKenzie, 1967   so far only known from California, USA ( GARCIA MORALES et al. 2017) in having a pair of frontal cerarii, oral-collar tubular ducts of two different sizes on the dorsal surface, and a circulus divided by an intersegmental line. However, the new species is distinguishable from T. frontalis   by the following characters (characters of T. frontalis   are given in parentheses): cerarii numbering 4–6 pairs (3 pairs); relatively deep oral-collar tubular ducts on dorsum present in two distinctly different sizes (different types of dorsal ducts are difficult to distinguish from each other, and the ducts are so shallow that outer ductules can be hardly seen in slide-mounted specimens); legs short, with hind trochanter + femur 300–330 μm long (legs relatively long, with hind trochanter + femur 420–458 μm long).

Trionymus okiensis   sp. nov. is also similar to Dysmicoccus boninsis ( Kuwana, 1909)   , the pantropical pest of sugarcane ( Saccharum officinarum   L.), in having a pair of frontal cerarii and oral-collar tubular ducts of two different sizes on the dorsal surface. However, it differs from D. boninsis   in the following characters (characters of D. boninsis   are given in parentheses): more than 10 auxiliary setae on each anal lobe cerarius (fewer than 10); multilocular pores on the dorsum (without dorsal multilocular pores); circulus divided by an intersegmental line (circulus not divided); and narrow and parallel-sided body with the ratio of its maximum length to maximum width 2.5–2.7 (body usually relatively broad, with ratio of maximum body length to maximum body width 1.7–2.0).

Etymology. The new species is named after the archipelago where it was first collected (Dougo Island is one of the Oki Islands), combined with the Latin suffix“ -ensis ” indicating the place of origin, in order to form an adjective.

Comments on the classification. Some species of the genus Trionymus   are very close to several species belonging to Dysmicoccus Ferris, 1950   and the current definitions of these genera are probably arbitrary ( WILLIAMS 2004). Most researchers follow MCKENZIE (1967), who placed species with 6 or more pairs of cerarii in Dysmicoccus   , and species with 5 or fewer pairs of cerarii in Trionymus   . However, on this basis it is difficult to determine the generic position of Dysmicoccus angustifrons ( Hall, 1926)   , which possesses 2–6 (sometimes up to 10) pairs of cerarii (DANZIG & GAVRILOV- ZI- MIN 2015), resulting in some controversy about its placement (e.g., DANZIG & GAVRILOV- ZIMIN 2015, MATILE- FERRERO et al. 2015). A similar taxonomic problem probably occurs also in T. okiensis   sp. nov. because it has 4–6 cerarii. In this study, T. okiensis   is placed tentatively in Trionymus   based on its morphological similarity to T. frontalis   (i.e., having two types of oral-collar ducts on dorsum, a small number of multilocular pores on dorsum, a circulus divided by an intersegmental line, and cerarii fewer than 6 pairs). 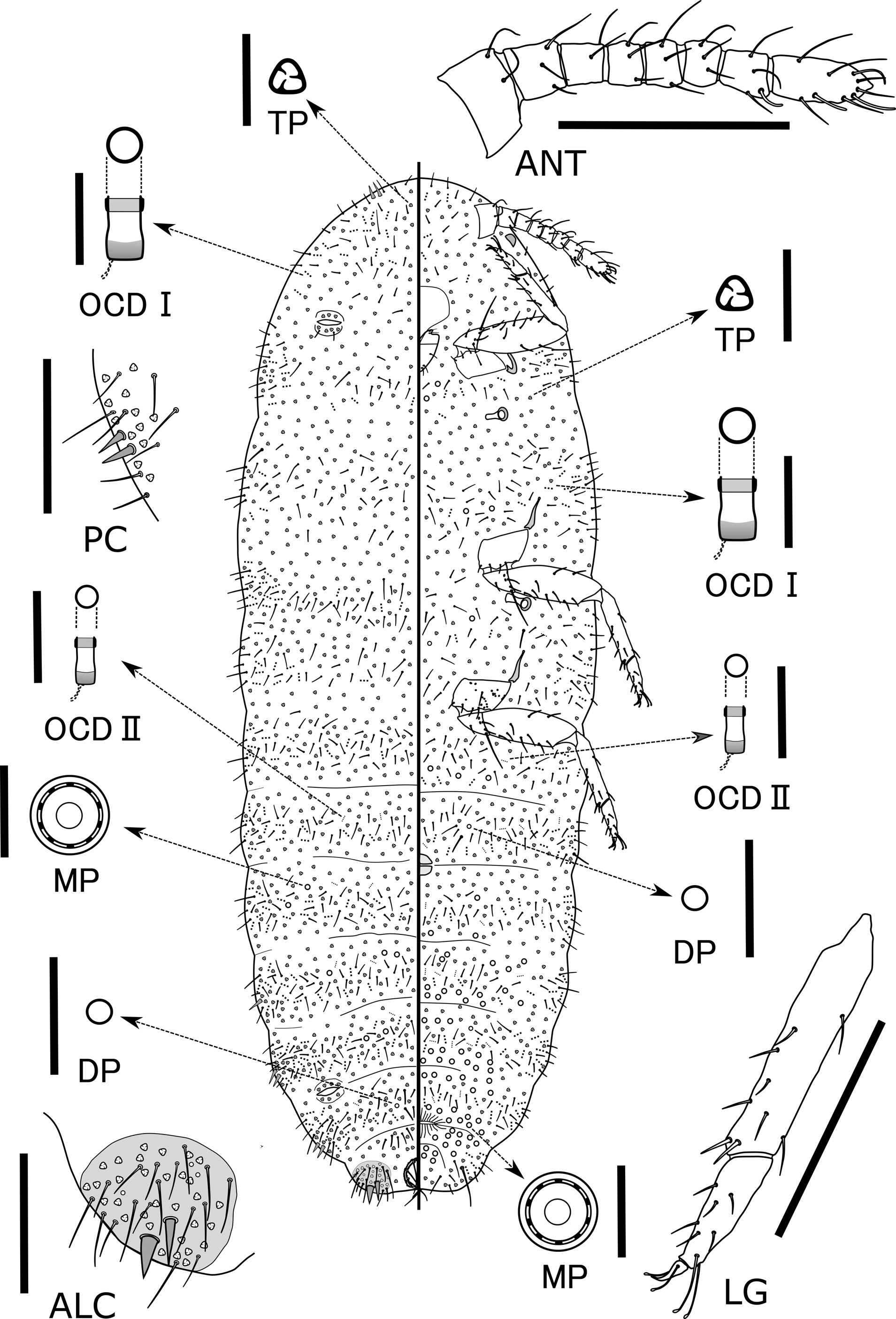