Male as in female, except for antennal configuration: eight funicular segments, first as long as second and third combined; second to seventh subequal in length, 2 × longer than wide; ultimate segment longer than penultimate segment.

The shape and colour pattern of the fore wings immediately distinguish this species from the other two species, which either have a much more brachypterous or normal fore wing shape. The hind wing costal margin has a thick band of black sclerotization that runs nearly the entire length of the wing, which is absent in the other two species. Strong genal and pronotal rugae are present, absent in the other two species. The mesosoma is the most longitudinally compressed of the three species with the pronotum, mesoscutum and scutellum all extremely transverse and of equal length. Strong white setae are present on the occiput and pronotum. The mesoscutum is posteriorly strongly raised in lateral view; mesoscutum compressed, narrow 2.5 × wider than long, without raised carinae; pronotal shoulders taper to point; wings slightly shortened, extending just beyond posterior margin of second tergite, 3 × longer than wide.

Named by Brues after the collector of the two type specimens, Dr Hans Heinrich Justus Carl Ernst Brauns, a medical doctor who practiced in Willomore in the Eastern Cape. The Brauns collection of Apocrita Hymenoptera was purchased by the Transvaal Museum (now Ditsong Museums of South Africa) for £1500 ( Kock and Krüger 1972; Anonymous 2020; Biodiversity Explorer 2020). The Brauns collection includes over 10,600 species represented by about 70,000 specimens and approximately 900 types ( Ditsong Museums of South Africa 2018). However, a number of the types could not be found in the collections held at Ditsong, (Audrey Ndaba, Collections Manager, pers. comm. 2018) and their precise whereabouts is of concern.

(Fig. 50 View Figure 50 ). This species is currently only known from the Eastern Cape Province where the species is associated with three vegetation types that are endemic to the province. The following vegetation distributional summaries were extracted verbatim from Mucina and Rutherford (2006):

Sundays Noorsveld (mostly north of the Klein Winterhoek Mountains, centred around Waterford and the Darlington Dam and a smaller area from Jansenville westwards; also some patches south of this mountain range west of Kirkwood in the Sundays River Valley; altitude 100-600 m).

Sundays Thicket (from the surrounds of Uitenhage and the northern edge of Port Elizabeth into the lower Sundays River Valley to east of Colchester and northwards to the base of the Zuurberg Mountains and stretching westwards north of the Groot Winterhoek Mountains to roughly the Kleinpoort longitude; also an extensive area north of the Klein Winterhoek Mountains including much of the Jansenville District and parts of the far-southern Pearston District and far-western Somerset East District; altitude 0-800 m).

The current distribution is likely to be an artefact of under-sampling and the species is expected to be more widespread in the Eastern Cape (Fig. 50 View Figure 50 ).

The female specimen (Fig. 35 View Figure 35 ) in CNCI has most of the long setae that are normally present on the head and mesosoma missing. These have clearly been dislodged, probably as part of a cleaning process. The specimen is unusually clean for a Sceliotrachelus , specimens of which usually have some degree of a covering of exudate, presumably as a result of their association with the leaf litter habitat or host association. The basal remnants of the setal insertions are evident on close examination of the pronotum and occiput, and all other characters support the determination of this specimen as S. braunsi . 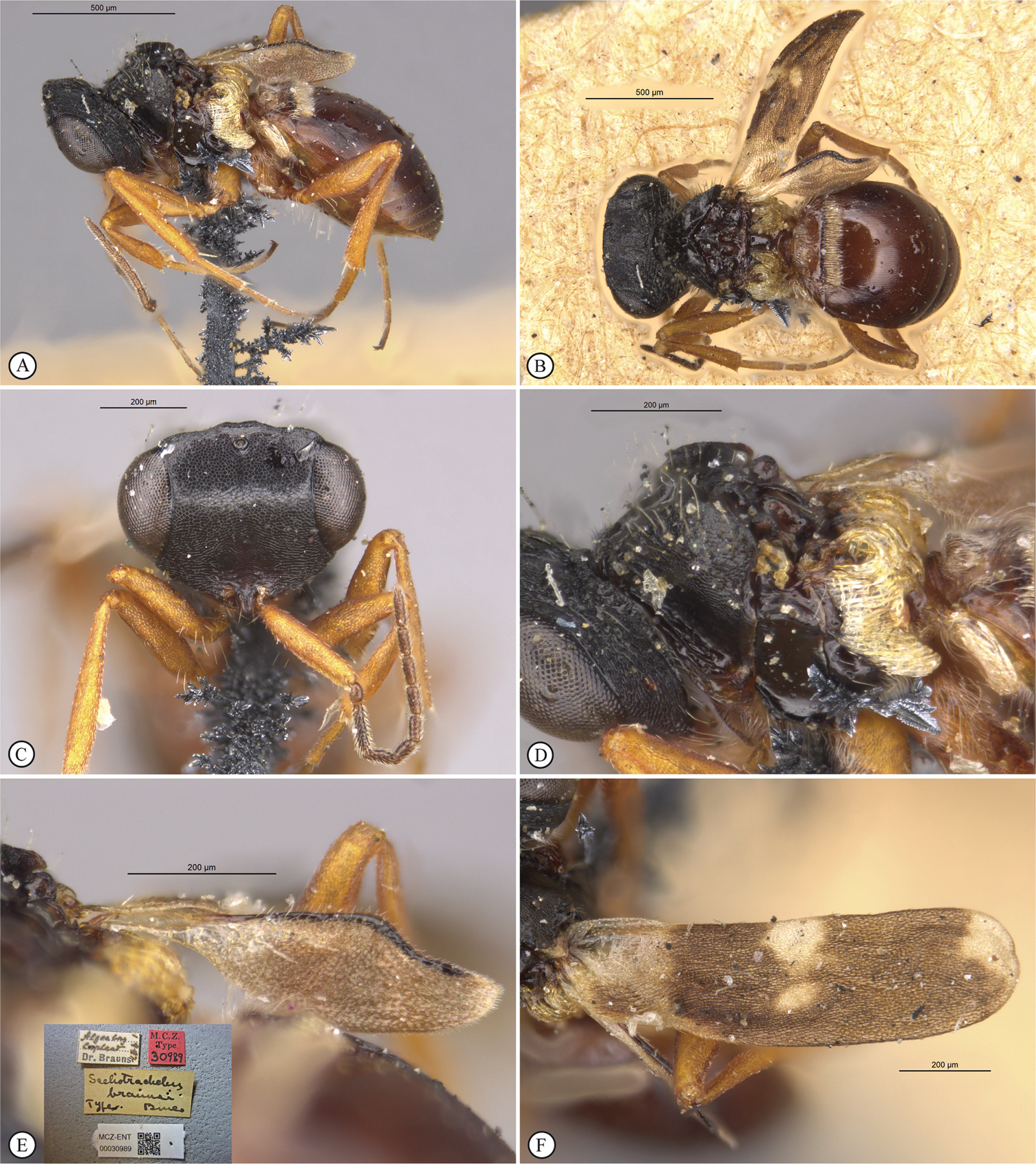 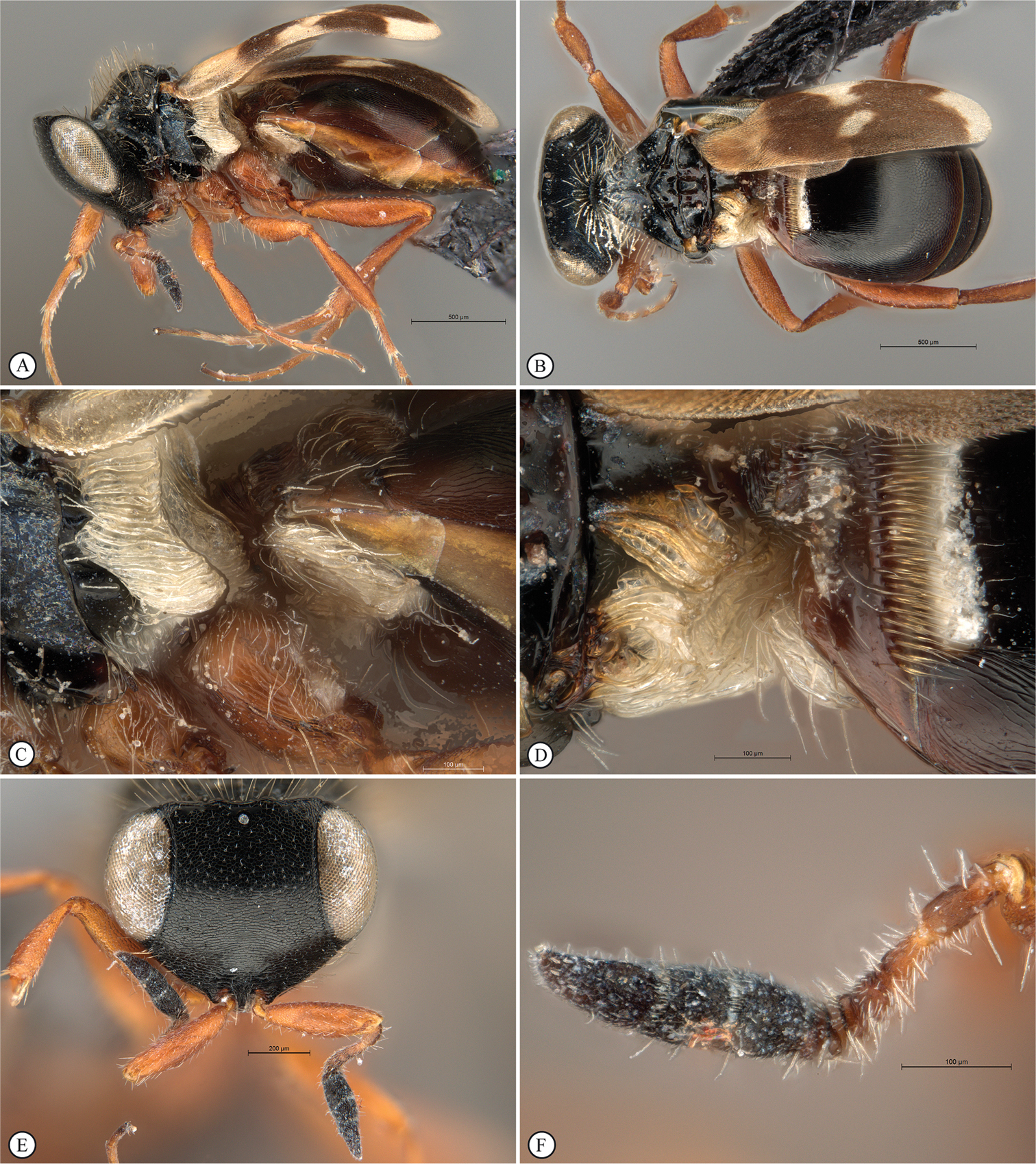 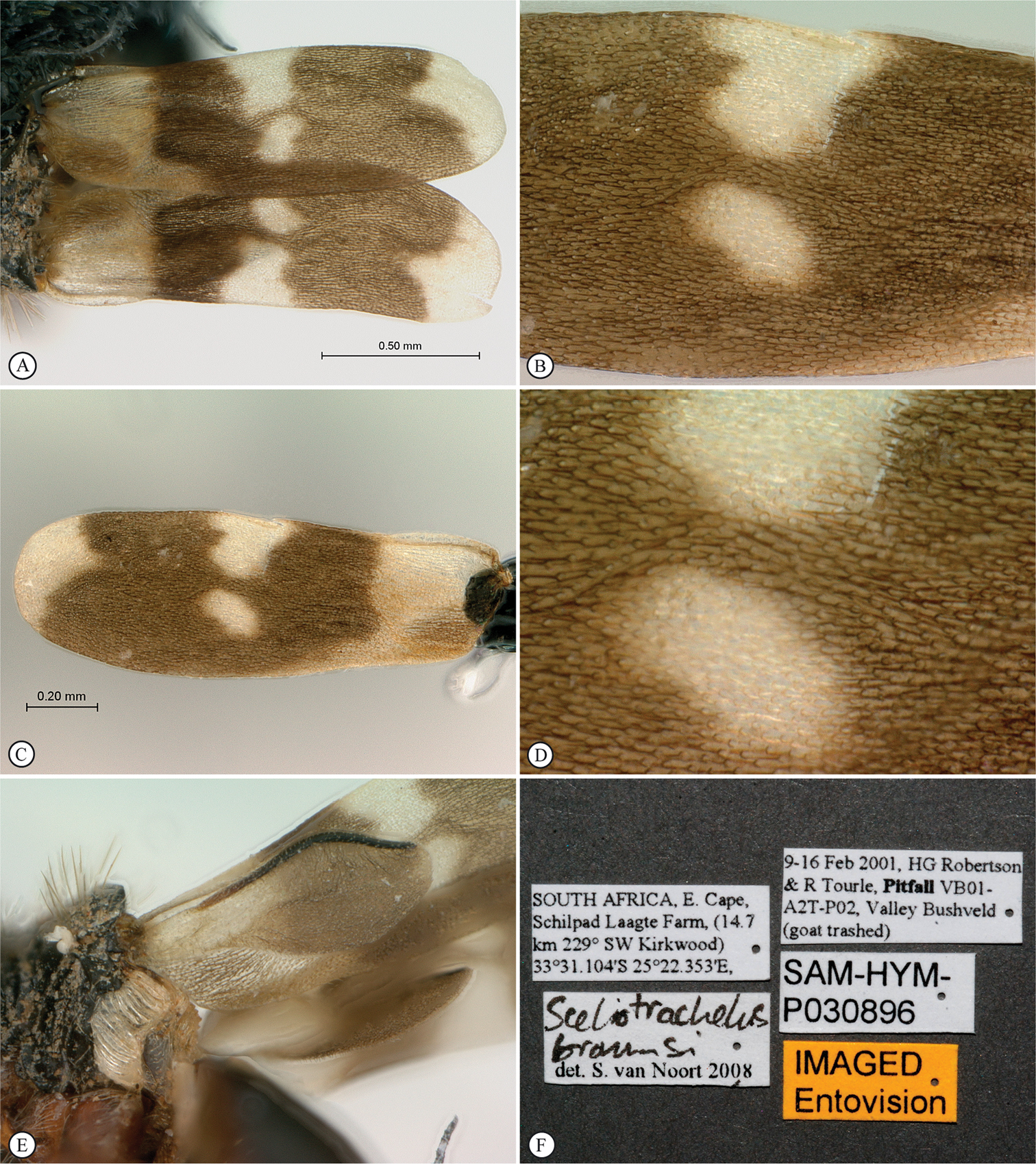 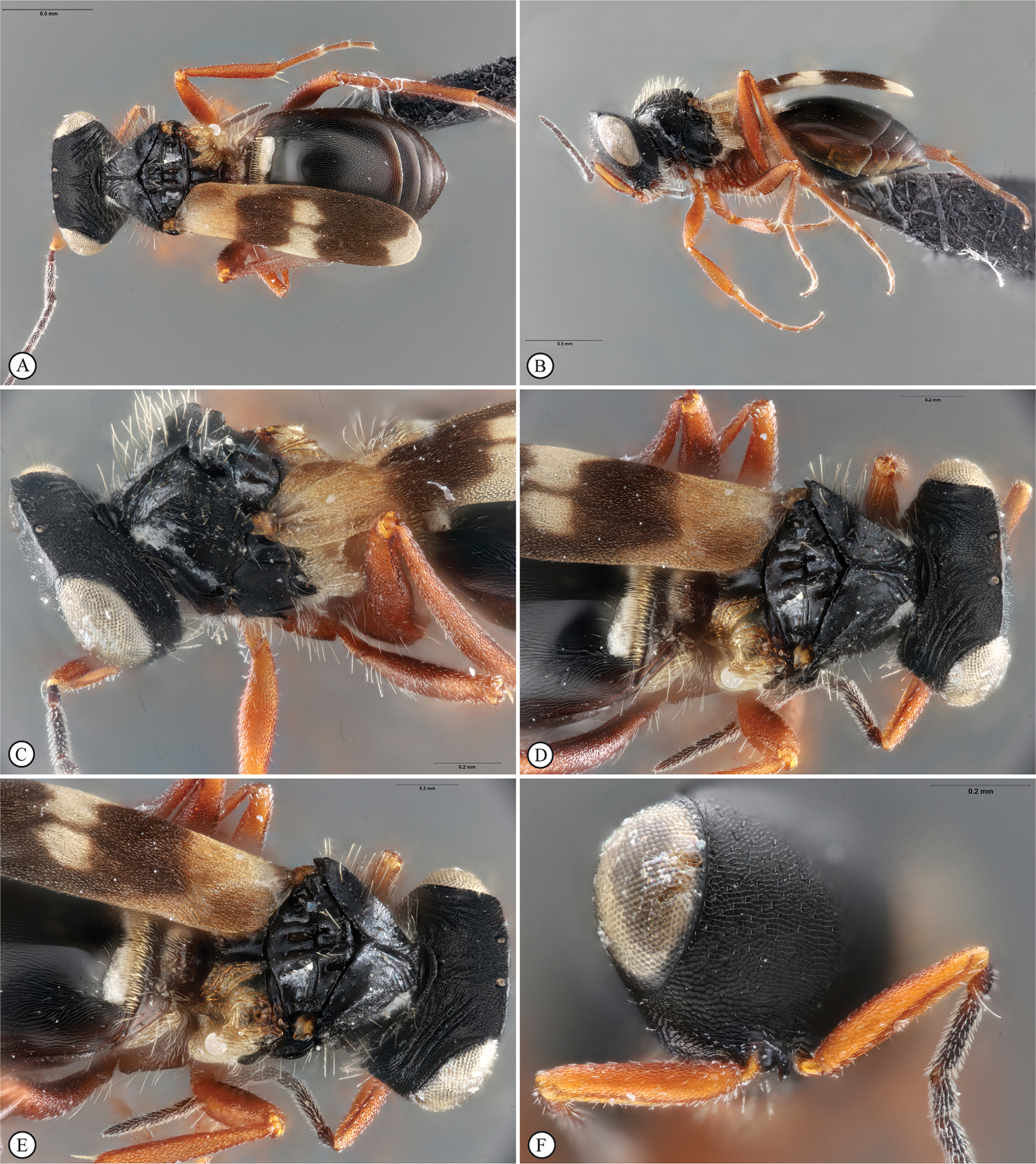 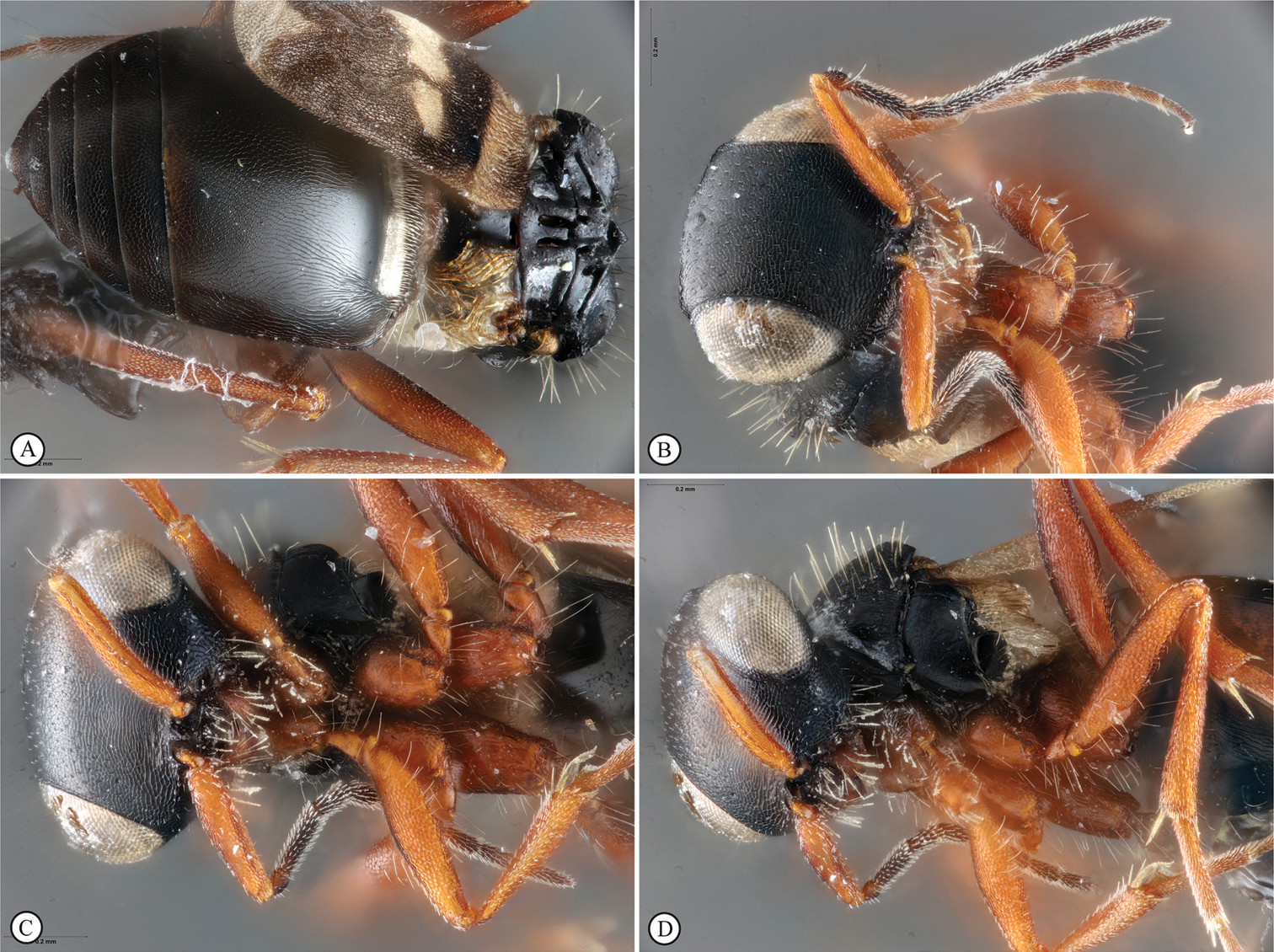 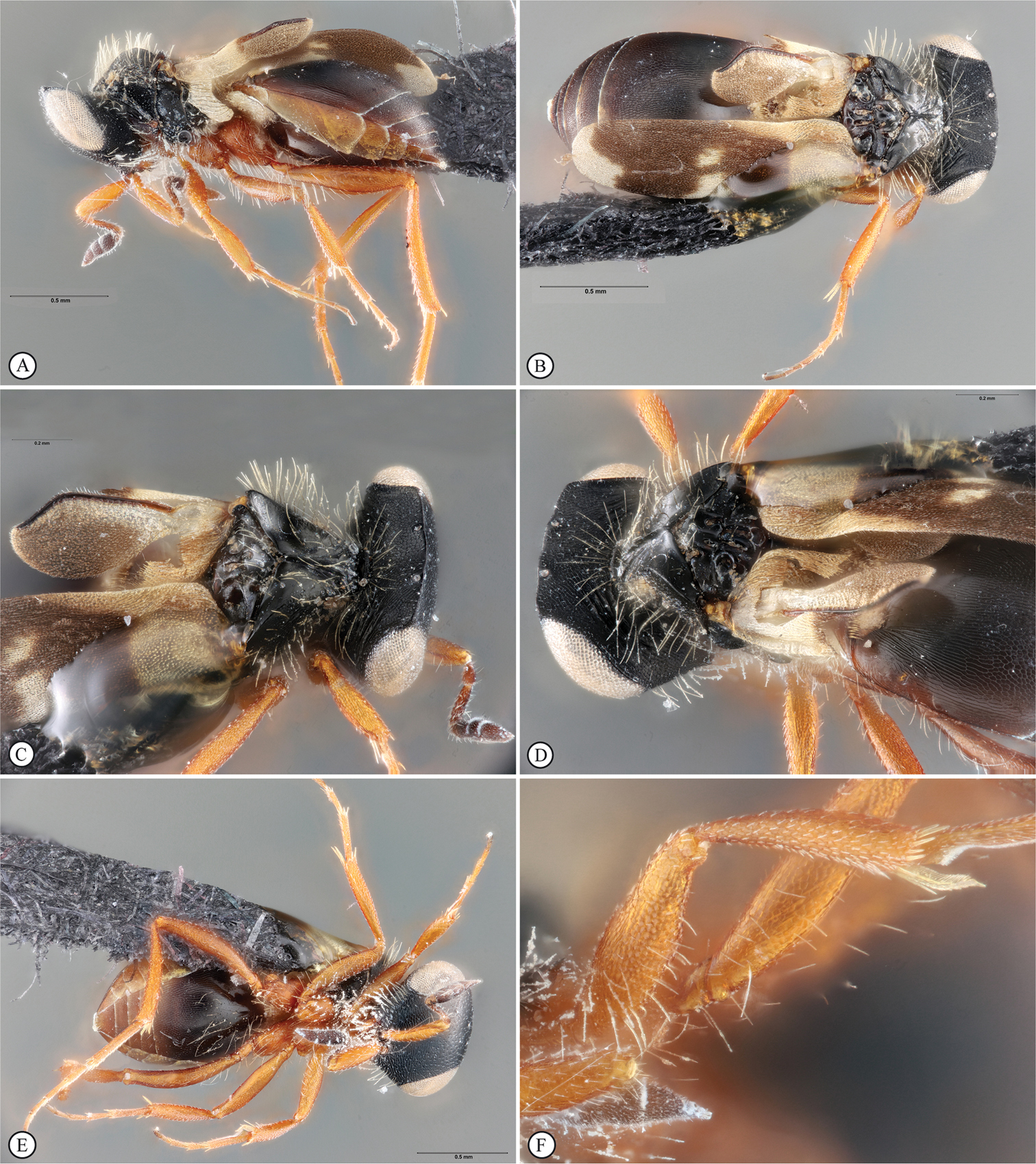 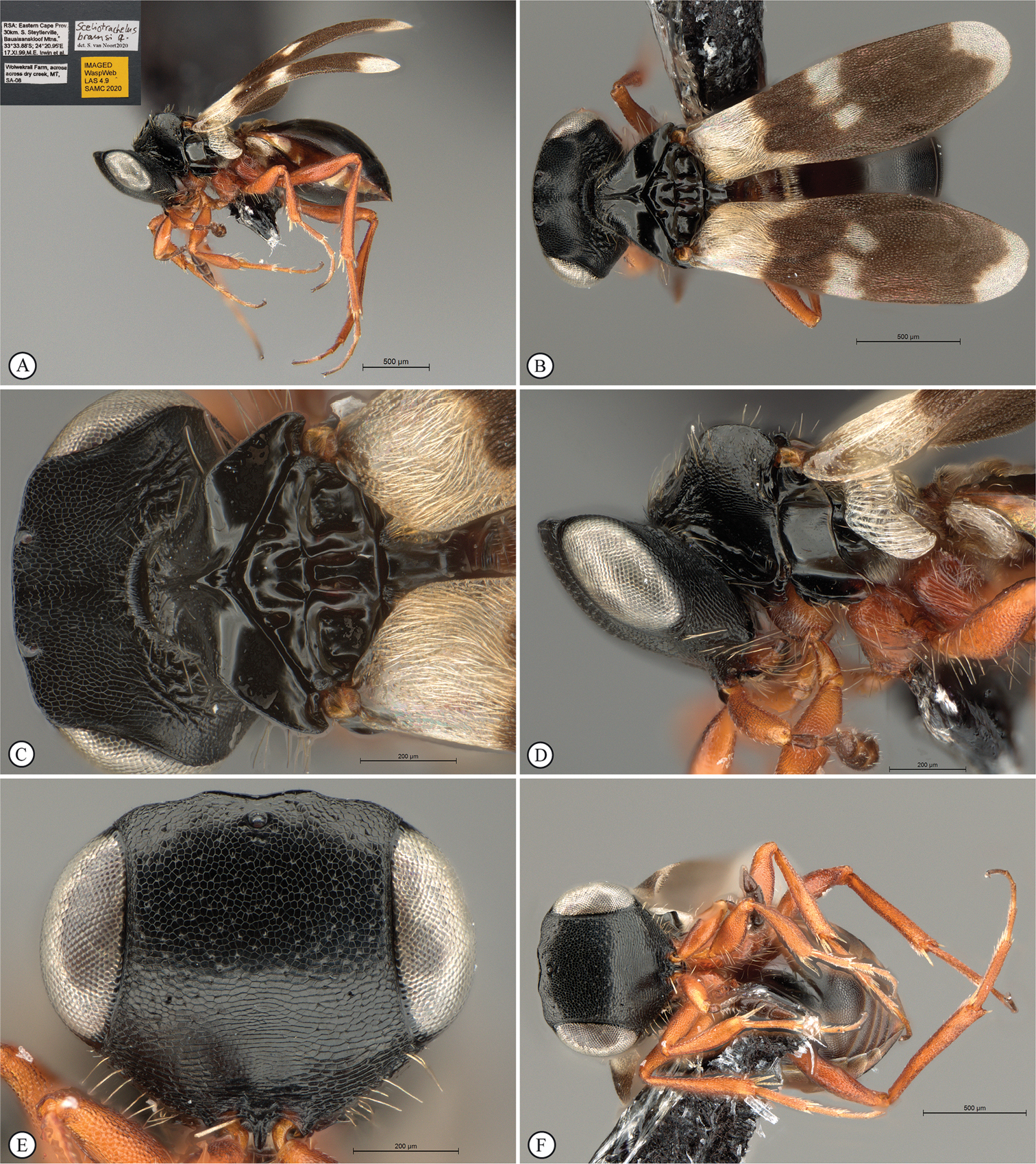 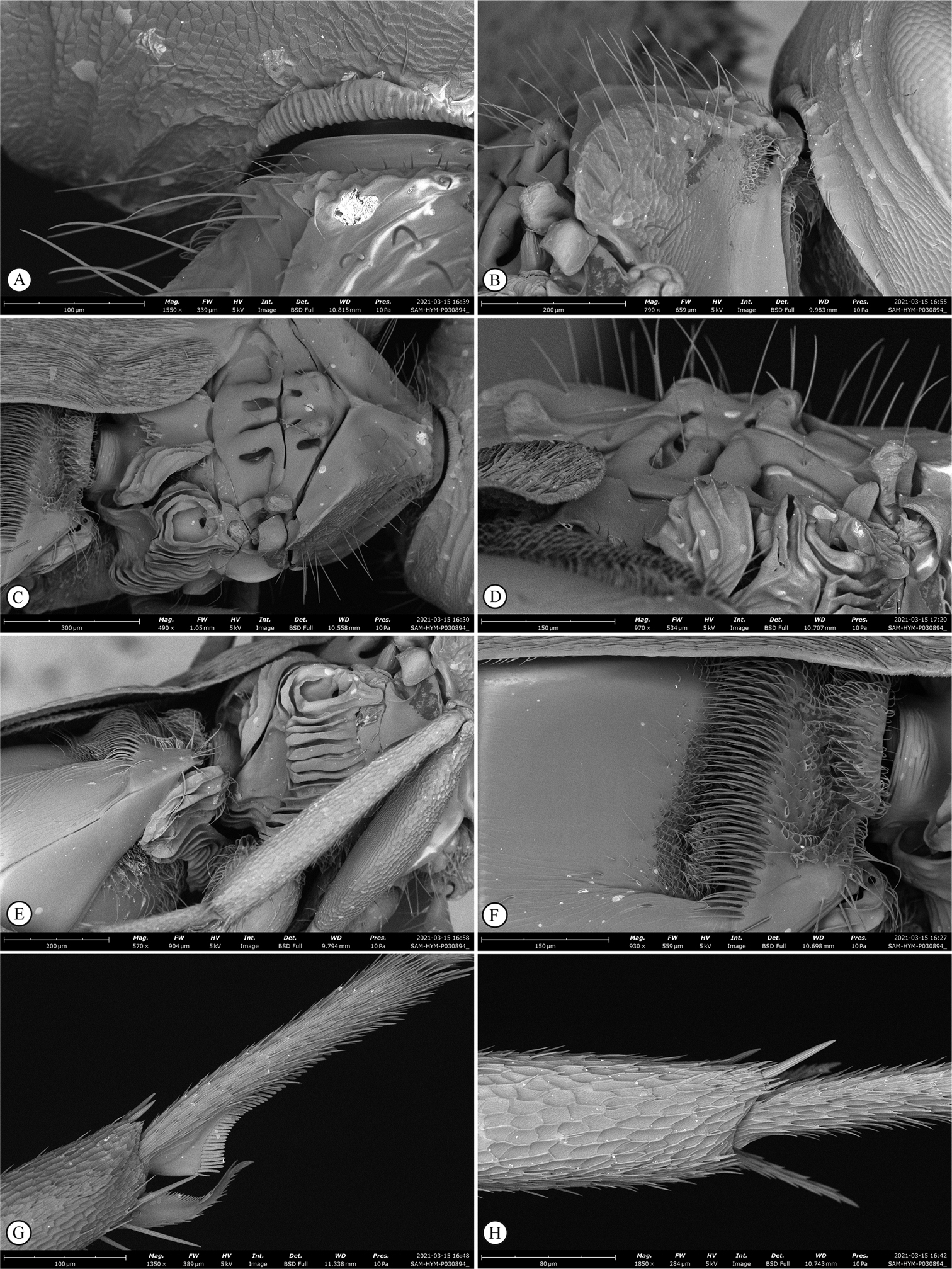 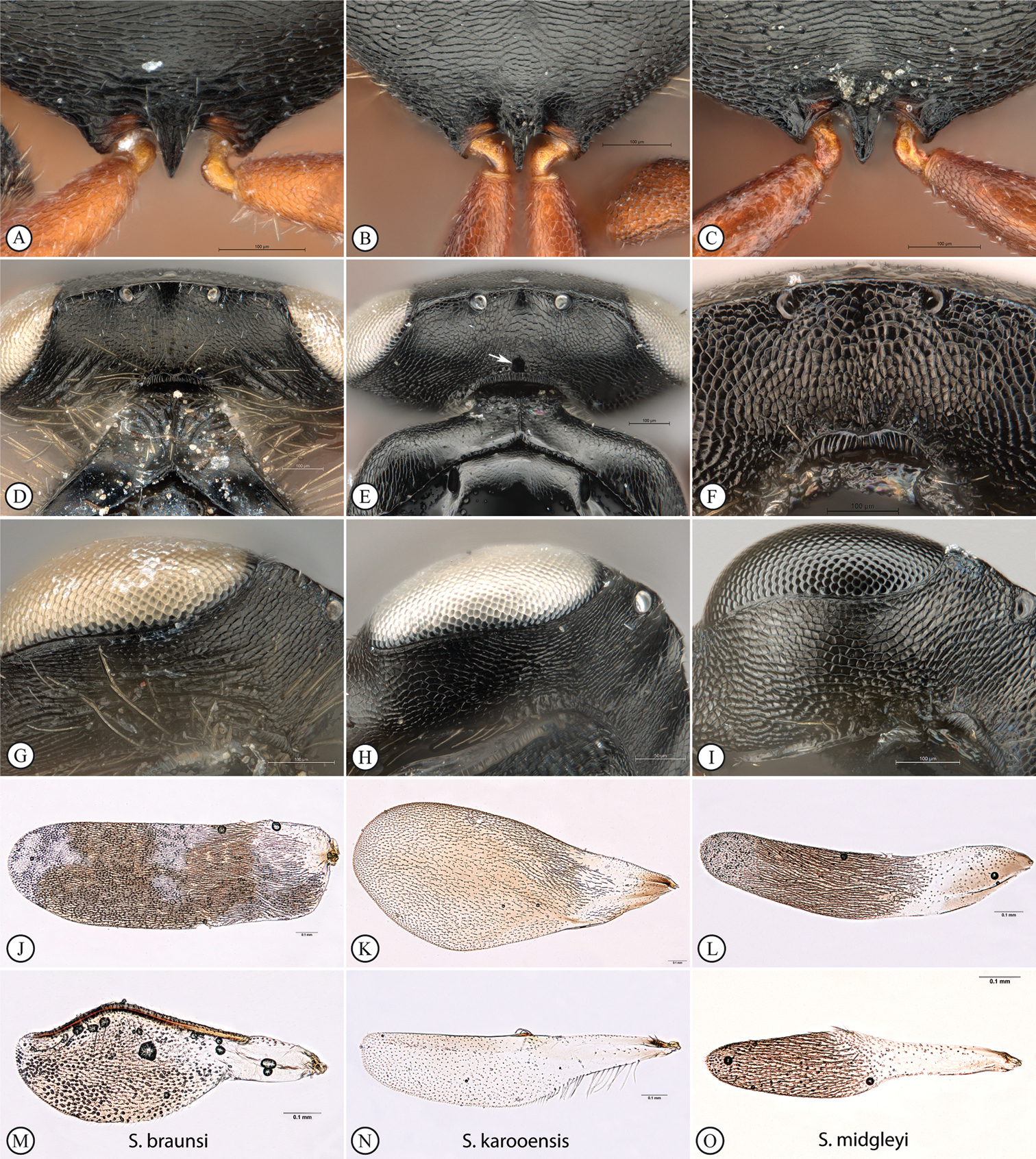 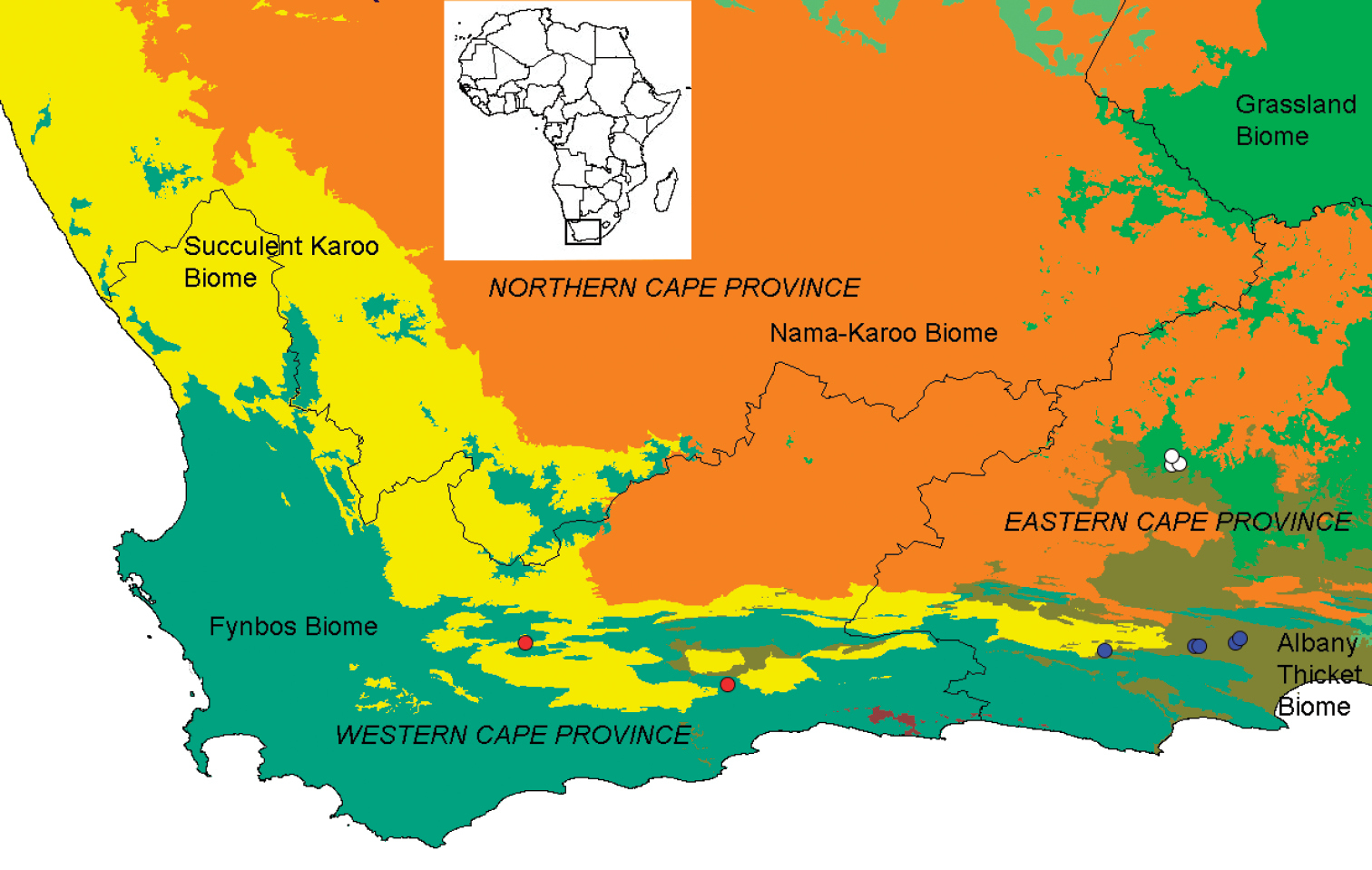