The specific epithet is derived from the ancient Greek “αινιγματικός”, meaning “riddle”, and bears a double entendre: not only is this the second species in this genus with a paradoxical distribution, this species also presents a puzzling new perspective on the generic classification system of the tribe Bothriomyrmecini   .

Shape dolichoderoid. Body with two ventrolateral protuberances on prothorax which are fused ventrally by a narrow ridge; setae very short and limited to the prothorax; 8 pairs of spiracles. ( Fig. 4).

Key to Neotropical Bothriomyrmex   species based on workers

Bothriomyrmex enigmaticus   sp. nov. is known from one collection on the north side of the island of Hispañola ( Fig. 5 View Fig. 5 ). The sampling took place in July 2015 during a Museum of Comparative Zoology expedition to the Dominican Republic. The new ant species was discovered while based at a guardhouse in the Toro Palomo sector on the SE side of the Loma Guaconejo Scientific Reserve, near the village of La Peonía, at 195 m in elevation. M. Prebus collected a partial nest containing workers and brood from decomposing wood at the top of a 1.5 m tall live sapling in the middle of a path leading west from the guardhouse. The habitat was scrubby secondary growth, roughly 100 meters from a more mature secondary lowland moist forest. Tapinoma litorale (Wheeler, 1905)   was abundant in this habitat; due to the superficial similarity of these two species, Bothriomyrmex enigmaticus   sp. nov. was mistaken for T. litorale   in the field. The nest was not mixed; it consisted solely of B. enigmatus   .

Dubovikoff & Longino (2004) came to the conclusion that Bothriomyrmex paradoxus   is a member of the Palearctic Bothriomyrmex   s.s. based on palp formula and wing venation. They also noted that it doesn’t fit perfectly into species groups in this region: a deeply impressed metanotal groove is found in the B. gibbus (Soudek, 1925)   group, but the gyne of B. paradoxus   also has short, suberect setae on the mesosoma and gaster, which is typical of the B. syrius (Forel, 1910)   group. With its large eyes, deep metanotal groove, and nesting preference, B. enigmaticus   sp. nov. appears to be closely related to B. paradoxus   . However, it diverges from the latter in several characters, most notably palp formula. Referring to Shattuck (1992), it appears that a palp formula of 6,4 is probably pleisiomorphic in the Dolichoderinae   . Within the tribe Bothriomyrmecini   there is a trend in palp reduction in Arnoldius   , Bothriomyrmex   and Chronoxenus   ( Table 1 View Table 1. A ) that becomes apparent when they are compared with Loweriella ( Shattuck, 1992)   and Ravavy (Fisher, 2009)   , which have palp formula 6,4 and 6,3. It is possible that a palp formula of 4,3 is plesiomorphic in the clade of ( Bothriomyrmex   + Chronoxenus   + Arnoldius   ), with the latter two genera having undergone subsequent reductions. Within other genera of the Dolichoderinae   , e.g., Technomyrmex (Mayr, 1872)   and Azteca (Forel, 1878)   , palp formula can be highly variable, making generic diagnoses based on this character alone problematic. While the reproductives (and therefore the wing venation) of B. enigmaticus   sp. nov. remain unknown, if the worker were to be classified based on the current generic diagnoses, one might be inclined to place it in Chronoxenus   based solely on palp formula. However, the similarities between B. enigmaticus   sp. nov. and B. paradoxus   mentioned above are striking, suggesting that these two species are sister taxa and palp formula is a labile character. 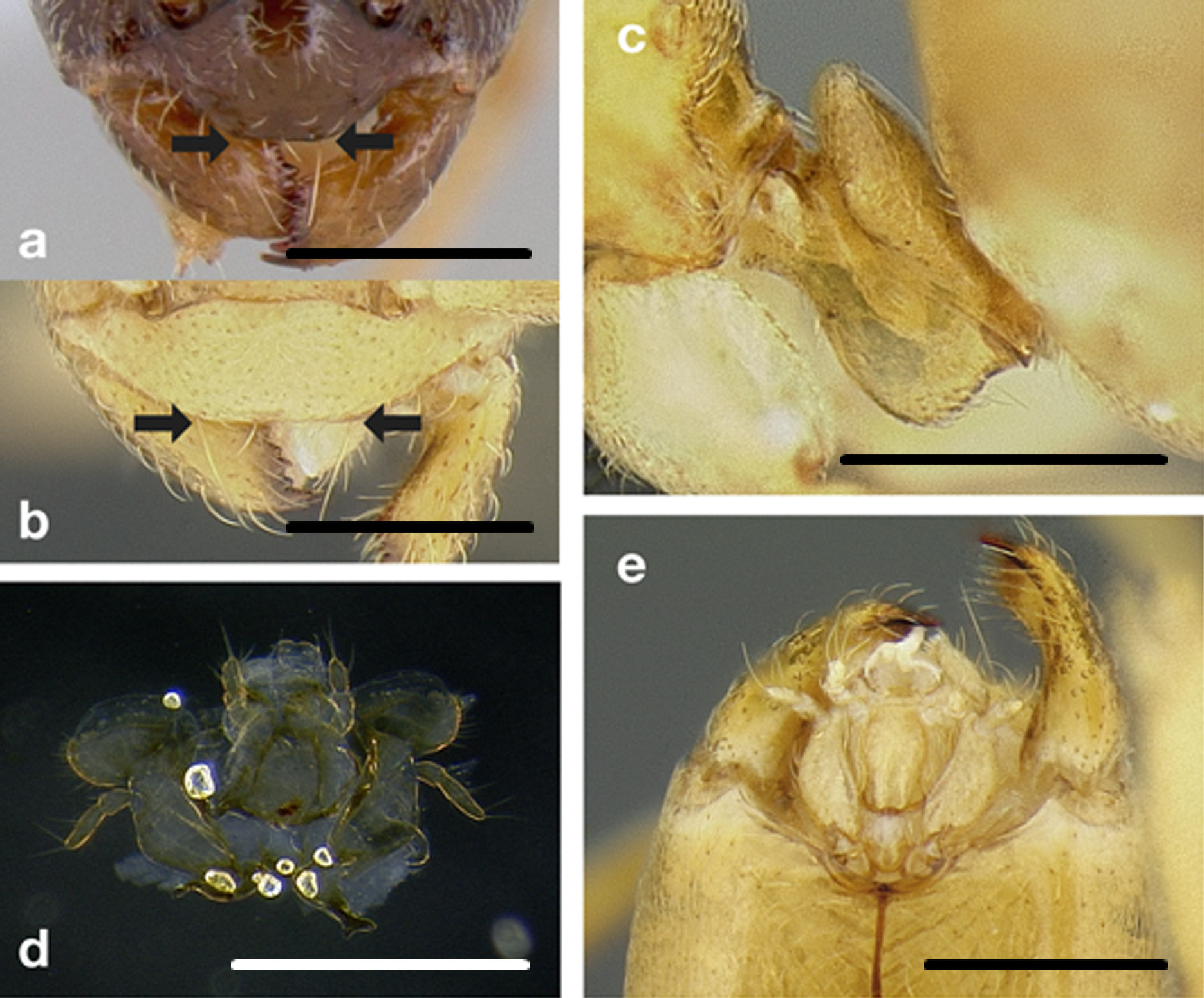