Description ( Figs. 6 View FIGURE 6 A–B, Fig 7 View FIGURE 7 A–B). External morphology is influenced by lifestyle (associated with P. deweerdtaephila sp. nov. or P. symbiotica sp. nov. or free-living) and by environmental factors. Free-living forms of X. deweerdtae in the Bahamas ( Fig. 6 View FIGURE 6 A) and Panama ( Fig. 7 View FIGURE 7 A) fit the original description of Lehnert & Van Soest (1999) and Van Soest & De Weerdt (2001). They form volcano shaped elevations that can measure up to 5 cm in length and with oscules on top, up to 0.7 cm in diameter. Individuals are light to dark pink, purple ( Panama), orange ( Bahamas) and turn white when preserved in ethanol; color in the choanosome is the same. Surface smooth; consistency hard, slightly compressible. Although not mentioned in the original description, we noticed that freeliving sponges always exude a viscous slime when cut.

Skeleton. Despite the differences in external morphology from the different lifestyles, the ectosome of both associated and free-living morphologies regardless of location consist of a unispicular regular skeleton of strongyles with 6–7 spicules meeting at each node ( Fig. 6 View FIGURE 6 C–D; Fig. 7 View FIGURE 7 C–D). Meshes of the ectosome are somewhat triangular. The choanosome for all lifestyles and regardless of location consist of an isotropic reticulation of strongyles with occasional paucispicular tracts, which conform to X. deweerdtae (Lehnert & Van Soest 1999) ( Fig. 6 View FIGURE 6 E–H; Fig. 7 View FIGURE 7 E–H).

Spicules: Thick and sometimes thin strongyles, 151–423 µm long by 6.5–28.2 µm in width. Size and morphology of strongyles depends on the associated status of X. deweerdtae and geographical location. Across all geographical areas sampled ( Bahamas, Puerto Rico, Panama), associated individuals have smaller and thinner spicules than free-living ones (see also discussion in Vicente et al. 2014); and between geographical areas, across lifestyles, individuals from island locations such as Bahamas, Puerto Rico and Jamaica have smaller and thinner spicules than those from Panama ( Table 3 View TABLE 3 ).

Habitat and ecology. X. deweerdtae was originally described from deep (82 m) fore reef habitats and reef caves of Jamaica (Lehnert & Van Soest 1999) and then later found in reef caves (10–12 m) of Curaçao (Van Soest & De Weerdt 2001). In our study, we found X. deweerdtae growing beneath scleractinean corals and on the shaded side of Agaricia reefs in Panama at depths as shallow as 2 m. X. deweerdtae and Plakortis spp. nov. sponge pairs can be found on the shaded side of spur and groove reef formations (14 m) exposed to high wave energy environments in Panama. In the Bahamas and Puerto Rico sponge pairs are found deeper, below 30 m in cryptic habitats growing on vertical walls, on the roof of overhangs and on the bottom of reef caves. Associated individuals of X. deweerdtae are more frequently observed than free-living ones when both lifestyles are present in a given area ( Vicente et al., 2014).

Taxonomic remarks. The polymorphic nature of X. deweerdtae is revealed by lifestyle (associated and freeliving) and by environmental factors (high wave energy and high silica environments, the latter associated with geographical location). Associated individuals do not exhibit a massive morphology and long volcano shaped oscules mentioned in the original description are absent. Instead, associated sponges are thinly to thickly encrusting. In Panama oscules for associated cases are small but visible (1–3 mm) and colonies are more thickly (0.5–1 cm) encrusting than associated individuals from Puerto Rico and the Bahamas (1 mm). Oscules for associated individuals from Puerto Rico and the Bahamas were not visible. Significantly smaller strongyles are observed in associated (250 × 12.2 µm) sponges than free-living sponges (346 × 15.5 µm) in three different geographic areas resembling high and low silica concentrations. This was interpreted as a possible benefit for X. deweerdtae in terms of a lower investment in skeleton synthesis for support (see discussion in Vicente et al. 2014). Another possible explanation is that nutrients may be limiting for both sponges and one species might be depriving the other of silica. On the other hand, in the high silica environments in Panama (see D’Croz et al. 2005) longer and thicker spicules were present in both free-living and associated sponges when compared with both associated and free-living individuals of Puerto Rico and the Bahamas ( Table 3 View TABLE 3 ). Free-living individuals from Panama also produced not only thicker and longer strongyles, but also had sharply bent terminals that bend either opposite (sshaped) or in the same direction (bracket-shaped) ( Fig. 7 View FIGURE 7 I) probably due to hypersilicification ( Zea, 1987; Zea et al., 2014). One other important character from free-living sponges, missing in the original description, is the release of viscous mucus by sponges when cut. Associated sponges however, produce very little mucous when cut. The conspecificity of associated and free-living individuals was confirmed with phylogenetic analysis from partial sequences of the 18S, 28S rRNA and cox1 genes (see below and Vicente et al. 2014).

Phylogenetic analysis. To confirm the identity of Haliclona plakophila sp. nov. as a new species and reconfirm the conspecificity of associated and free-living morphotypes of Xestospongia deweerdtae we partially sequenced the 18S, 28S rRNA and cox1 genes of holotype and paratype specimens. We conducted a maximum likelihood analysis from sequences of species belonging to Haplosclerida that were closely related to Haliclona spp. and Xestospongia spp. deposited in GenBank. The maximum likelihood analysis of the 18S rRNA gene sequence placed H. plakophila distant from any of the monophyletic clades (A–E) previously reported by Redmond et al. (2013) ( Fig. 8 View FIGURE 8 A). Members of clade C ( Redmond et al., 2013) were not included in the phylogenetic analysis, because sequences from H. plakophila were highly dissimilar to species in this clade. Sequences from associated and free-living individuals of X. deweerdtae were all>99% homologous to each other and to the holotype of X. deweerdtae (ZMAPOR13584), confirming that all specimens of both life styles are conspecific. Conspecificity of all X. deweerdtae lifestyles, including the holotype specimen, had a>99% sequence homology for the 28S rRNA and cox1 genes ( Fig. 8 View FIGURE 8 B–C).

We were unable to retrieve enough sequence data from the holotype specimen of X. deweerdtae to produce a phylogenetic tree of the cox1 with strong bootstrap values, encompassing all closely related Haplosclerida species. However, we had enough sequence data from our material and proceeded to do a maximum likelihood analysis of the cox1 including members of the Haplosclerida that form monophyletic clades A and B from Redmond et al. (2011) ( Fig. 9 View FIGURE 9 ). The clade of all X. deweerdtae conspecifics did not fall into either monophyletic clade. Like X. deweerdtae , H. plakophila sp. nov. also did not fall into either clade A or B ( Fig. 9 View FIGURE 9 ). 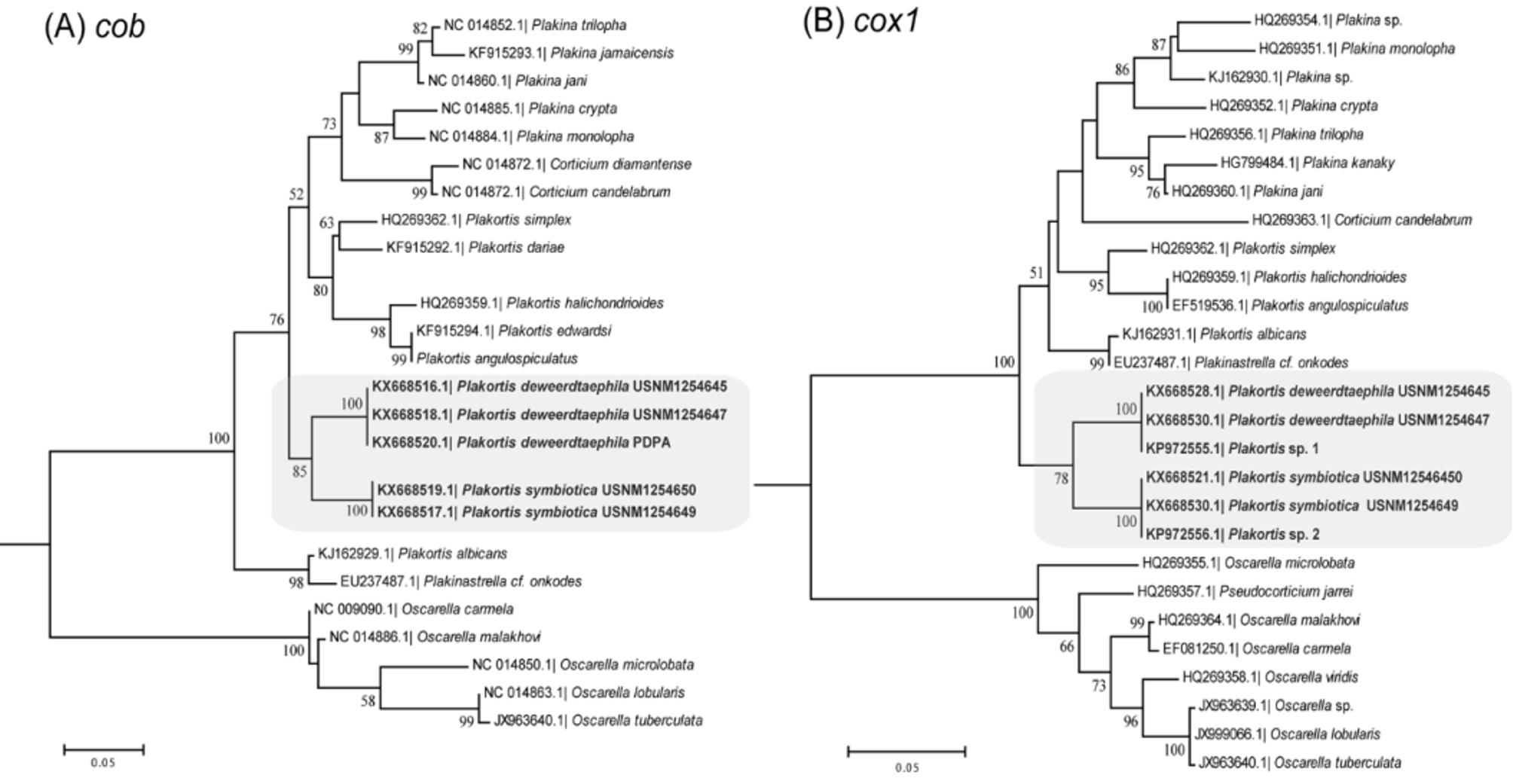 FIGURE 4 Maximum likelihood topology generated from partial sequences of cytochrome b oxidase (cob) (A) and cytochrome c oxidase subunit I (cox 1) (B) of the Homoscleromorpha of this study and from sequences downloaded from GenBank. Topology for both trees is rooted on the sponge Ectyoplasia ferox (Duchassaing & Michelloti, 1864) EU 23748.1 (Class Demospongiae, Order Axinellida). Bootstrap values less than 50 % were omitted from the trees. Coding following the species names refers to the museum catalogue number or collection location (PA-Panama, PR- Puerto Rico, BH-Bahamas) followed by lifestyle (AS-associated, FL-free-living). Species highlighted in bold represented sequences provided by this study. 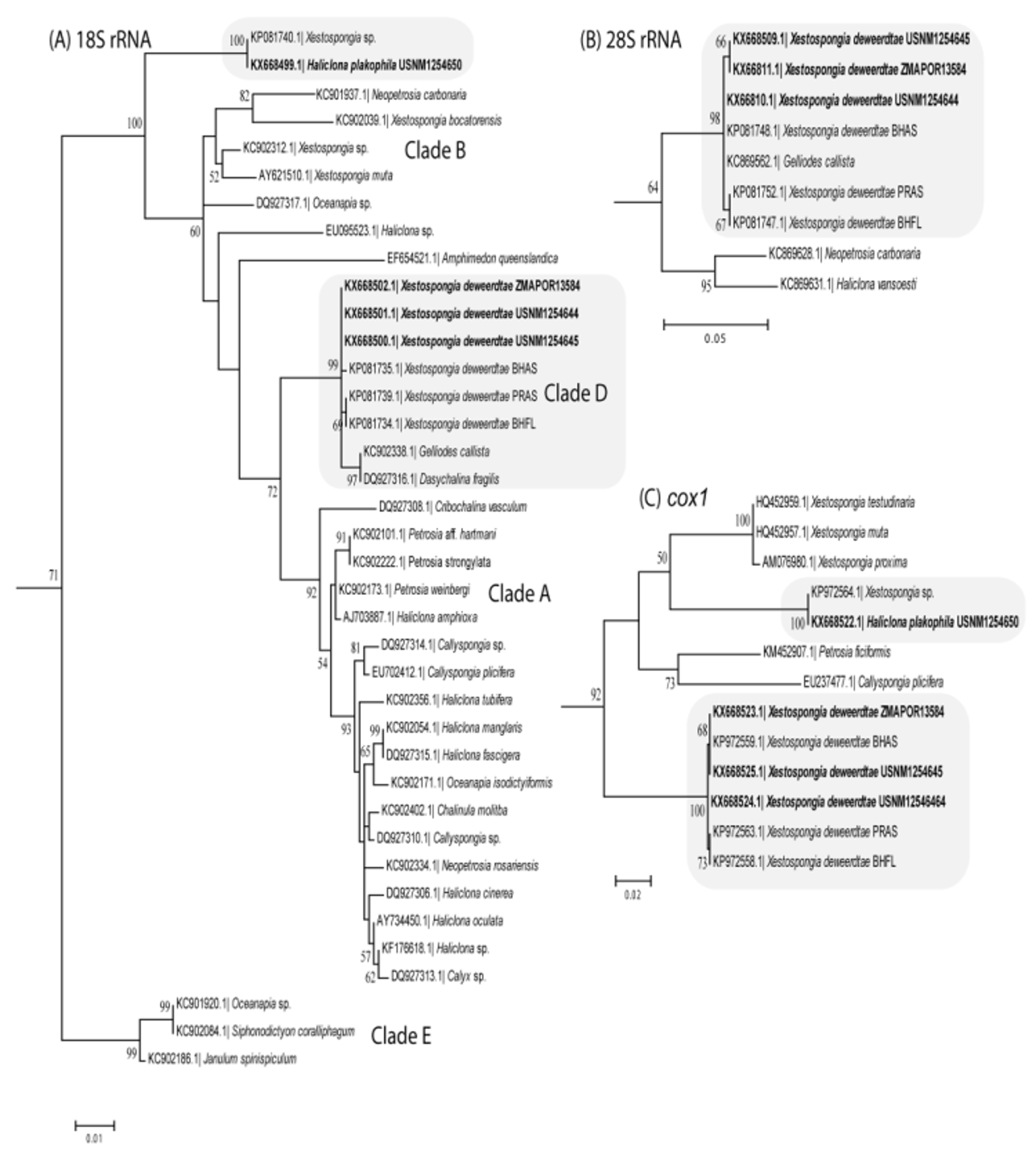 FIGURE 9 Maximum likelihood topology generated from partial sequences of cox 1 of the Haplosclerida in this study (bold) and from sequences downloaded from GenBank. Bootstrap values less than 50 % were omitted from the tree. Clades A – B refer to Redmond et al. (2011) Fig. 3. Coding following the species names refers to the museum catalogue number or collection location (PA—Panama, PR- Puerto Rico, BH-Bahamas) followed by lifestyle (AS-associated, FL-free-living). Associated samples from Puerto Rico involve P. symbiotica and associated samples from the Bahamas and Panama involve P. deweerdtaephila. Species highlighted in bold represented sequences provided by this study.