The newly recorded specimens were taken from a hard substrate within the previously known geographic range but at a greater depth than that formerly recorded (20 m) for this tropical species.

The newly recorded specimens are of the usual form for this species, having a long, hard, narrow, yellowish and opaque stalk supporting a long, narrow, translucent head up to two-thirds of the total length. The stalk subdivides into smaller root-like branches adhering to small rocks or pebbles, presumably torn from the substrate by the dredge. The branchial aperture is terminal, but is recurved so that the aperture is directed posteriorly. The anteriorly directed atrial aperture is on a short anterodorsal siphon. Two of the three specimens are about 10 cm, but although the external test of each zooid is entire, the thorax is entirely mutilated, having been expelled from the test. The abdomina, although not well preserved, are retained in the test. The third specimen is small and the zooid has a small developing thorax that could be regenerating. This regenerating thorax contains numerous (about 20) rows of at least 20 small circular stigmata. The anterior and posterior rows are very irregular and in most rows at least some of the stigmata are horizontally divided, the rows apparently in the process of subdividing. Strong longitudinal and oblique muscle bands on the thorax continue along the length of the abdomen. A vertical gut loop is in the abdomen. A long, smooth-walled stomach with a conspicuous suture line but without folds is halfway down the abdomen. The wide longitudinal ridges evident in the stomach wall appear to be artefacts of the stretching and collapse of the stomach. A short, narrow duodenum is behind the stomach. The remainder of the gut is obscured by the mass of small pear-shaped testis follicles crowded in the gut loop and spread around the distal, post-pyloric part of the descending limb and the adjacent proximal part of the ascending limb. In these specimens, a mass of gut contents in the rectum also obscures the gut loop. A narrow vascular stolon projects from the posterior end of the zooid into the stalk.

In the absence of the thorax (which, in Clavelina   lacks internal longitudinal vessels), the identity of the present solitary species is difficult to determine. Its body form is very similar to that of Pterygascidia mirabilis Sluiter, 1904   , having a long oval head surrounded by a layer of soft transparent test supported on a long narrow stalk attached basally to a hard substrate by a small tuft of roots. The branchial aperture faces the substrate on a conspicuous terminal recurved siphon (see Millar 1975, 1988 for discussion and synonymy). Previously Pterygascidia   was thought to be a member of the aplousobranch family Cionidae   with the gut and gonads behind the pharynx. However (see Kott 1990a) it is now known to be a phlebobranch ascidian with the gut and associated gonads in the body wall alongside (rather than behind) the thorax and the body not divided.

The similarity in the external appearance of Pterygascidia   and the present species appears to be the result of convergence, a phenomenon often observed in the Ascidiacea  in which phylogenetically unrelated taxa share structural features that appear to enhance their interactions with the environment. Convergence can thus be seen in the adaptations that compensate these organisms for their sessile habit.

A single specimen consisting of a single stalked fan-like head, heavily fouled with sand was taken from the central western Australian coast. The species is common in the vicinity of Darwin and the Arafura Sea. 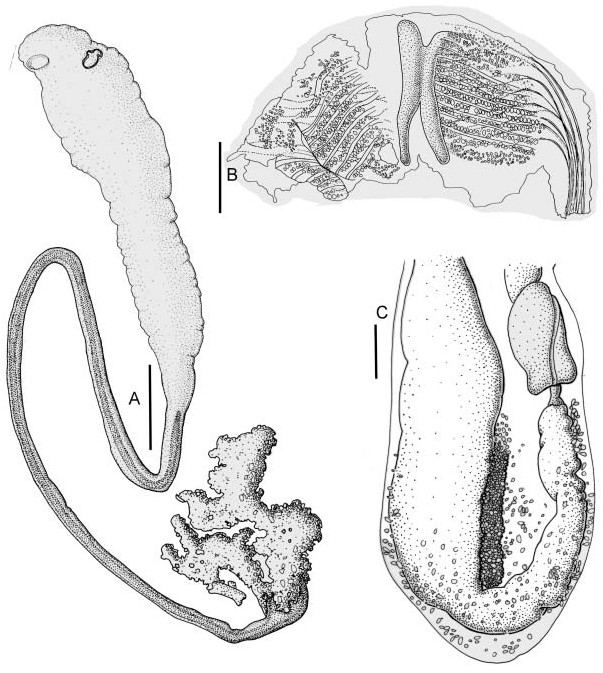