Mortimer, Kate, Cassà, Susanna, Martin, Daniel & Gil, João, 2012, New records and new species of Magelonidae (Polychaeta) from the Arabian Peninsula, with a re-description of Magelona pacifica and a discussion on the magelonid buccal region, Zootaxa 3331, pp. 1-43: 8-11

areas present either side of ridges. Proboscis not everted. Both palps attached, long (distal tips broken?), thinner at point of attachment but increasing in thickness by chaetiger 2; arising ventrolaterally from base of prostomium. Palps reaching at least chaetiger 20, non-papillated region reaching chaetiger 4 or 5. Papillae long, digitiform; proximally with two rows of papillae either side of inconspicuous groove, one row either side medially and distally.

Colour. Preserved colour uniformly cream/white in alcohol, conspicuous glandular areas noticeable interparapodially in the abdomen. Staining with methyl green shows no distinct pattern, but a diffuse overall stain. After much of the stain has dissipated, light stain between chaetigers 4–7 remains.

Etymology. From the name Sinbad, the fictional sailor of traditional Arabic and Persian tales who sailed extensively around the Persian Gulf (and beyond) during his mythical voyages, referring to the region in which this species was first sampled.

Remarks. Magelona sinbadi  sp. nov., shares many morphological similarities with M. gemmata  originally described from the Seychelles. In particular, the prostomia of both species, which are: longer than wide; undulating laterally and which possess distinct quadrangular regions either side of thick, highly ribbed ridges. Both species further share similarities in the shape of the thoracic lamellae. However, the two species differ in the shape of the lamellae of the 9 th chaetiger. This is particularly true for the notopodia, with M. gemmata  possessing subtriangular lamellae with swollen bud-like tips ( Mortimer & Mackie 2003: figure 4 E), whilst M. sinbadi  sp. nov., possesses digitiform lateral processes in addition to triangular postchaetal lamellae. The two species further differ in the neuropodia of the same chaetiger, M. gemmata  possessing postchaetal lamellae that are distinctly pointed, and prechaetal lobes that are long and slender. In M. sinbadi  sp. nov., these are broadly rounded (postchaetal lamellae) and shorter, thicker and more blunt (prechaetal lobes). Magelona sinbadi  sp. nov., further differs in possessing thoracic neuropodial lobes which reduce in size to the mid-thorax.

As in M. sinbadi  sp. nov., the methyl green staining pattern of M. gemmata  shows no clear pattern (new observations), however, distinct transverse bands of white speckles across the dorsum, level with the parapodia are present. These bands were heavily stained with Rose Bengal when the type specimen was first examined; similar bands were not observed in M. sinbadi  sp. nov.

Magelona longicornis  differs in possessing a prostomium wider than long, with some degree of crenulation of the anterior margin; dorsal superior processes and larger triangular postchaetal lamellae on chaetiger 9; and bidentate abdominal hooded hooks. 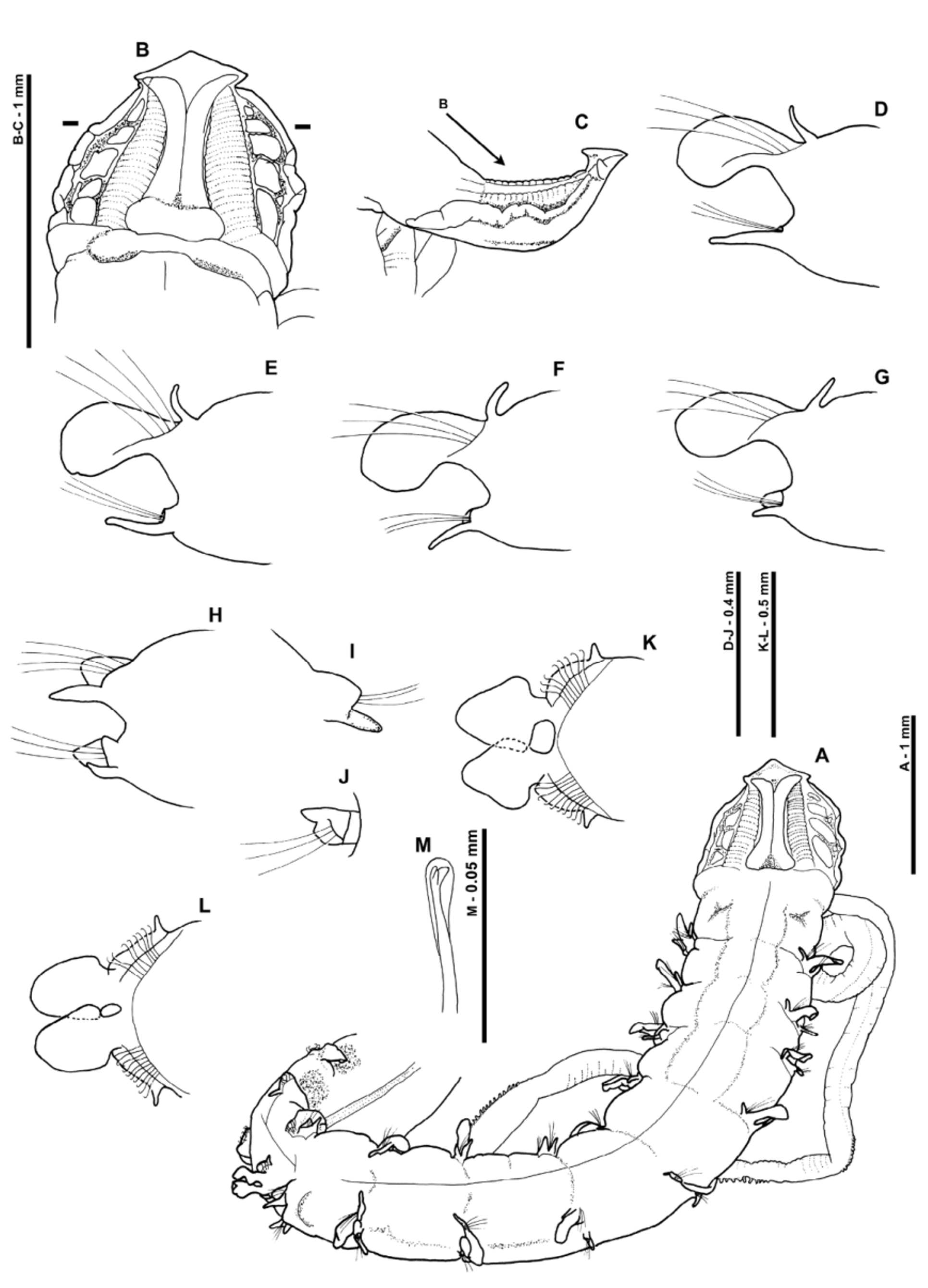 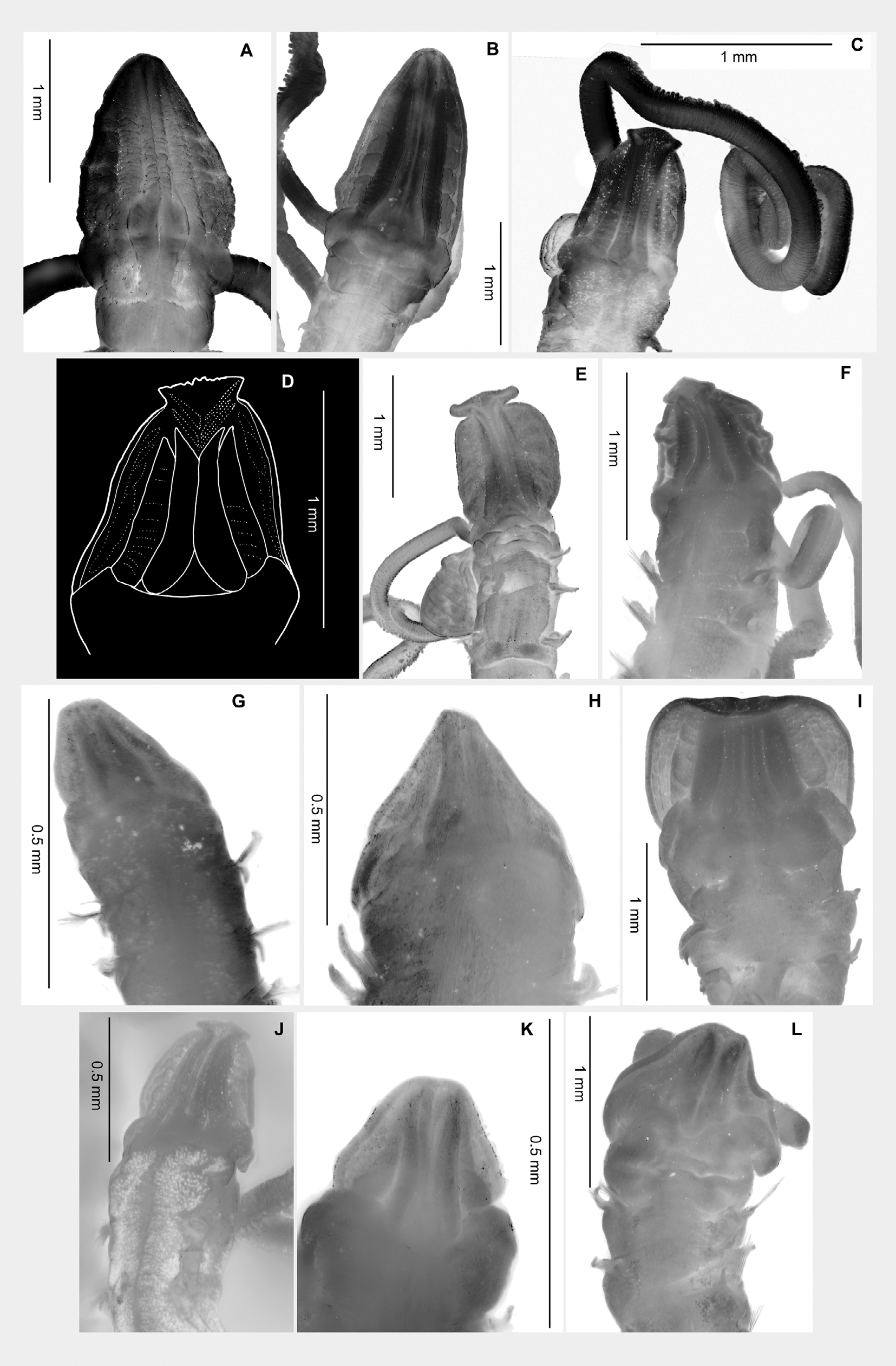