Mortimer, Kate, Cassà, Susanna, Martin, Daniel & Gil, João, 2012, New records and new species of Magelonidae (Polychaeta) from the Arabian Peninsula, with a re-description of Magelona pacifica and a discussion on the magelonid buccal region, Zootaxa 3331, pp. 1-43: 15-17

Colour. Preserved specimens cream-white in alcohol, majority of material initially stained with Rose Bengal. Distinct reddish/brown pigment band present between chaetigers 5–8, faded in some specimens, although always present (Figures 5 A, 6 C). Very light Rose Bengal staining interparapodially in the abdomen. Methyl green staining weak all over, light pigmentation between chaetigers 3–5 and 7–9. Small patches of darker pigment present on thorax ( Figures 6View FIGURE 6 A, B), dorsally between chaetigers 1−5, and around segment margins in posterior thorax. Ventrally, light pigmentation is present as transverse bands between chaetigers 2 and 4. Light interparapodial patches of staining in abdomen. Patches of white speckles present (Figures 5 A, 6 C) dorsally and ventrally between chaetigers 1–5; closer to mid-line in venter and strongest around chaetigers 3–4. Speckles also present ventrally along the mid-ventral line from chaetigers 8 into abdomen. Methyl green pigment persisting around white speckled areas after much of the stain has dissipated.

Remarks. The Persian Magelona cf. cincta  specimens observed here share many similarities with the Hong Kong Magelona cf. cincta  specimens as described by Mortimer & Mackie (2009) in possessing a pigment band in the posterior thorax, lamellar and prostomial shape, methyl green staining patterns, characteristic bulbous chaetigers in the mid-thorax and the presence of white speckled regions in the thorax and abdomen. The only perceived differences are the slightly more expanded neuropodial thoracic lamellae of chaetiger 1 in Hong Kong material (which are more scoop-shaped, possessing higher edges) and the presence of occasional minute dorsal and ventral processes in the abdomen of the Persian material. The Hong Kong material has been re-examined and odd minute projections at the inner margins of chaetal rows have been observed on a couple of specimens. The fact that even in the Persian material these processes are sporadic (even on the same specimen) suggests that this is a variable character within this species. The degree of protrusion of these processes, and hence their conspicuousness may depend on the degree of contraction of the specimen. It is possible that these processes move in and out under coelomic pressure. We believe this to be the same species as those specimens observed from Hong Kong. Both the Iranian and Hong Kong material differed from the type material, in having less distally expanded neuropodial lobes of the first three chaetigers. However, the type specimen is much larger than either the Iranian or Hong Kong material examined. It is possible that the perceived differences seen here may be due to size. Therefore, more material in a better condition, and of a comparable size from the type locality needs to examined before any conclusions can be made. 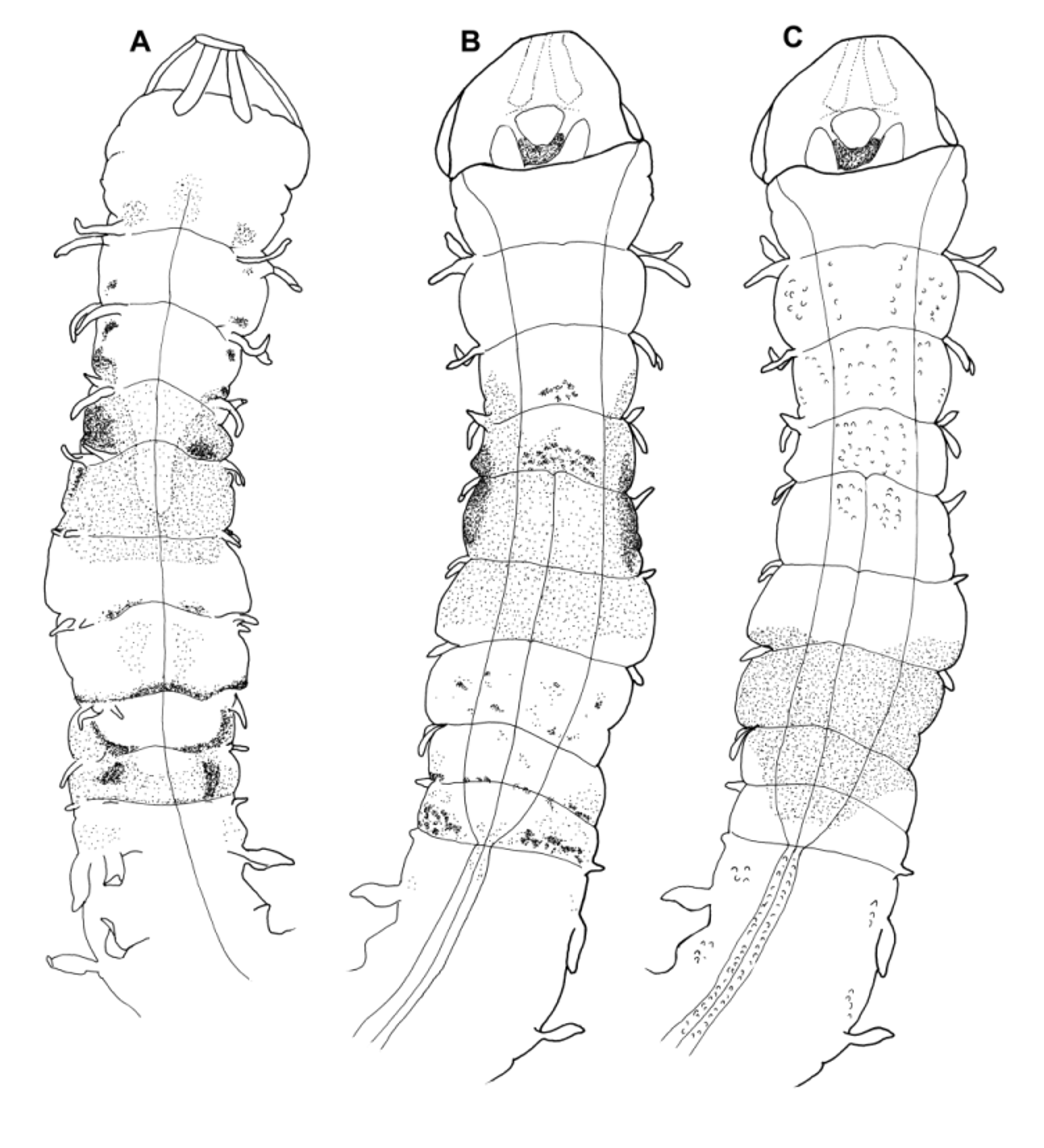