Austroearinus  can be distinguished from all other agathidine genera with the following combination of characters: tarsal claws with a basal tooth; mesoscutum unsculptured and lacking notauli; hind coxal cavities open; propleuron without projection; ovipositor as long as or longer than metasoma.

New World, primarily Neotropical. One species, Austroearinus rufofemoratus  n. comb., is widespread in central and eastern USA and through Central America, but the genus is far more diverse in warm tropical areas.

At least two species formerly placed in other agathidine genera belong here: Austroearinus rufofemoratus  , originally placed in Bassus ( Muesebeck 1927)  , and subsequently transferred to Earinus ( Sharkey 2004)  ; Austroearinus unicolor (Schrottkey)  n. comb., originally placed in Orgilus (Schrottkey 1902)  , but more recently considered as a member of the genus Bassus  . The genus is extremely species rich. I estimate there to be more than 100 species and perhaps several times this number. Many species also appear to be common, for example, there has been intensive Malaise trap sampling in La Selva, Costa Rica for more than a decade (http://viceroy.eeb.uconn.edu/ALAS/ALAS.html) and, of all species of Agathidinae  , A. chrysokeras  has been the most frequently collected.

A specimen of A. rufofemoratus  from Guanacaste Province, Costa Rica, was reared from a microlepidopteran, only identified as Tortricidae  , feeding on the mature leaves of Amyris pinnata  ( Rutaceae  ) and living in a light silk web. The wasp larva emerged from the last instar caterpillar on 6 April 2002 and spun a strong white cocoon tightly glued to the leaf surface. This is unlike other known agathidines which spin inside the caterpillar cocoon. The wasp eclosed 9 days later, which means that all of this happened in the full dry season. The site is 280 m elevation, Lat 11.04562 Long ­85.45742, and locally known as Puente Mena in the Del Oro property adjacent to the north boundary of the Area de Conservacion Guanacaste. The site lies on the interface between ACG dry forests and ACG rain forest. The entire record may be found at http://janzen.sas.upenn.edu, refer to specimen number 02­SRNP­14223.

Etymology From the Latin australis which means southern, referring to the southern distribution of this genus and its morphological similarity to Earinus  . 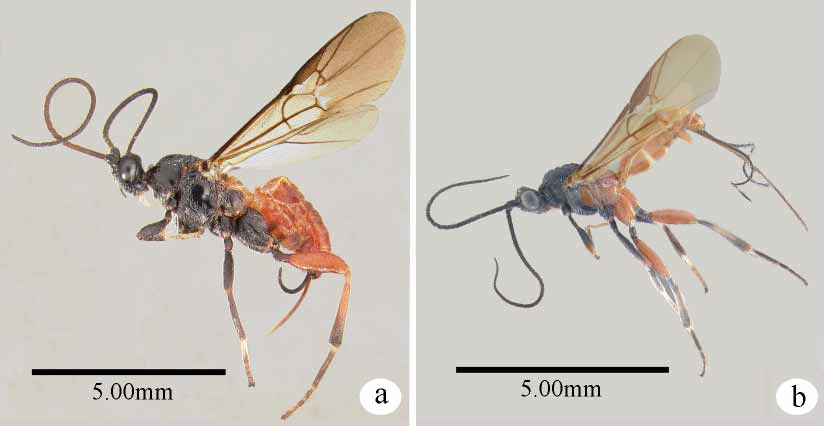