This species is poorly known and the name Pyropteron atlantis   was erroneously used by several authors. Laštůvka & Laštůvka (1995) applied it to the south-western European P. hispanica   , while Kallies (1999) applied it to populations of P. borreyi   feeding on Armeria   in the High Atlas Mts. The paralectotype was figured and redescribed by Kallies (1999). The lectotype was considered lost. Rediscovery of the lectotype ( Fig. 179 View FIGURES 171–179 ) by Pühringer and the discovery of new specimens and larvae now allow us to fix the identity of this taxon and provide a detailed diagnosis. Based on these data, P. atlantis   is not closely related to P. hispanica   or P. borreyi   but belongs to the P. affinis   group of species.

Diagnosis. P. atlantis   is very similar to other species in the group, but differs by the distinct white pattern on deep black ground colour and the completely black abdominal sternites. Fresh specimens have a silvery shine, which is lost over time. Large and dark specimens of P. affinis   as they occur especially in the Iberian Peninsula can be similar. However, P. affinis   as well as P. erodiiphaga   differ from P. atlantis   by the lack of a white posterior margin of abdominal tergite 2, the dark grey base colour (black in P. atlantis   ), the abdominal sternites and the forewings, which are densely mixed with bright scales (almost completely black in P. atlantis   ). We did not find consistent differences in the structure of the male genitalia of these three taxa. There are some differences in the size and shape of the crista medialis of the gnathos, which is long and round in P. atlantis   and P. erodiiphaga   , small, short and somewhat triangular in P. affinis   from western and central Europe. Furthermore, the distal 1/6 of the crista sacculi of the valva is curved ventrad in P. atlantis   (distal 1/4 angled at almost 90 degrees in P. erodiiphaga   and distal 1/3 bent in a blunt angle in P. affinis   ). P. atlantis   is also similar to P. borreyi   , P. koschwitzi   , P. hispanica   and P. maroccana   . P. atlantis   differs from all of them by the black base colour, the absence of the PTA in both sexes and the pure white (never yellowish) colour of the body patterns. Males of P. hispanica   , P. maroccana   , and P. aistleitneri   also differ from P. atlantis   by the presence of a white, subapical spot of the antennae. P. kautzi   has a very short PTA and a dark brown (not black) body colour, yellowish (not white) pattern and a medial dark brown (not white) anal tuft.

Barcodes. Based on our sequence analysis, P. atlantis   is sister to both P. affinis   and P. erodiiphaga   , suggesting a north-west African origin of the affinis   species group.

Biology and habitat. The larvae feed in the upper part of the strong root of Helianthemum croceum (Desfontaines) Persoon   (pers. observation Bläsius & Bartsch). The presence of larvae is detected by small amounts of granular, reddish brown excrement extruded from the bore, which loosely adheres to the roots of the hostplant. Some caterpillars found at the end of May produced abundant frass during the summer but did not develop into moths, suggesting that the development takes at least two years. Pupation takes place in the gallery of the larva in the lowest part of the stem or a basal branch. Before pupation, the larva constructs a short tunnel closed by a well visible, silken lid, which is mixed with frass. In the area of Oukaimeden two Helianthemum species   occur, the abundant H. croceum   and the closely related, but much rarer H. helianthemoides (Desfontaines) Grosser. Larvae   could only be found in the first, which is widespread on crystalline soils at high altitude in the High Atlas Mts where it often forms masses on gently to moderately grazed slopes ( Jury et al. 2008). This species is poorly attracted to currently available artificial pheromones. Only a single male could be caught flying around a pheromone contaminated backpack in strong wind in late afternoon (RB).

Distribution. Only known from the High Atlas Mts south of Marrakech, Morocco. 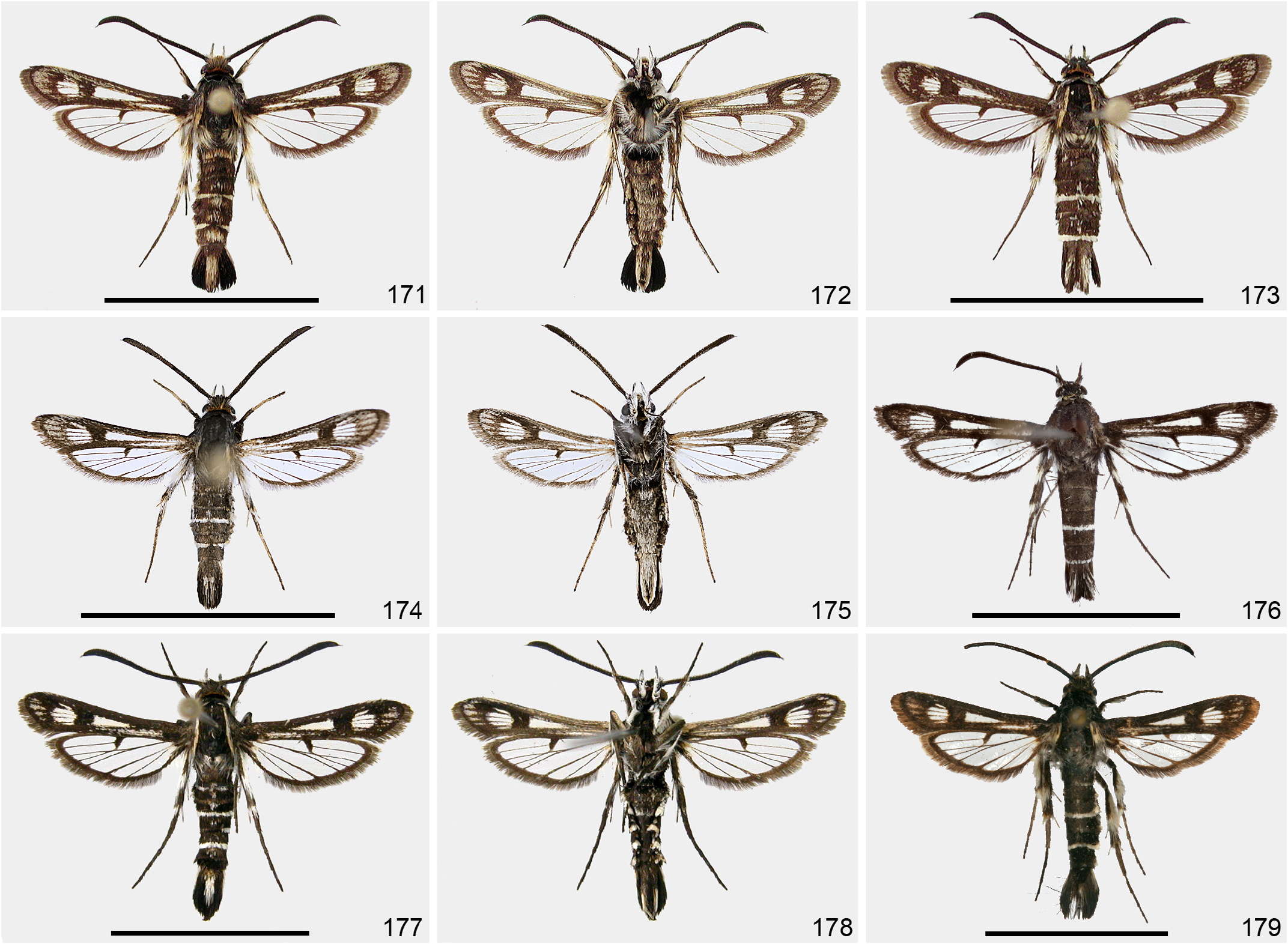 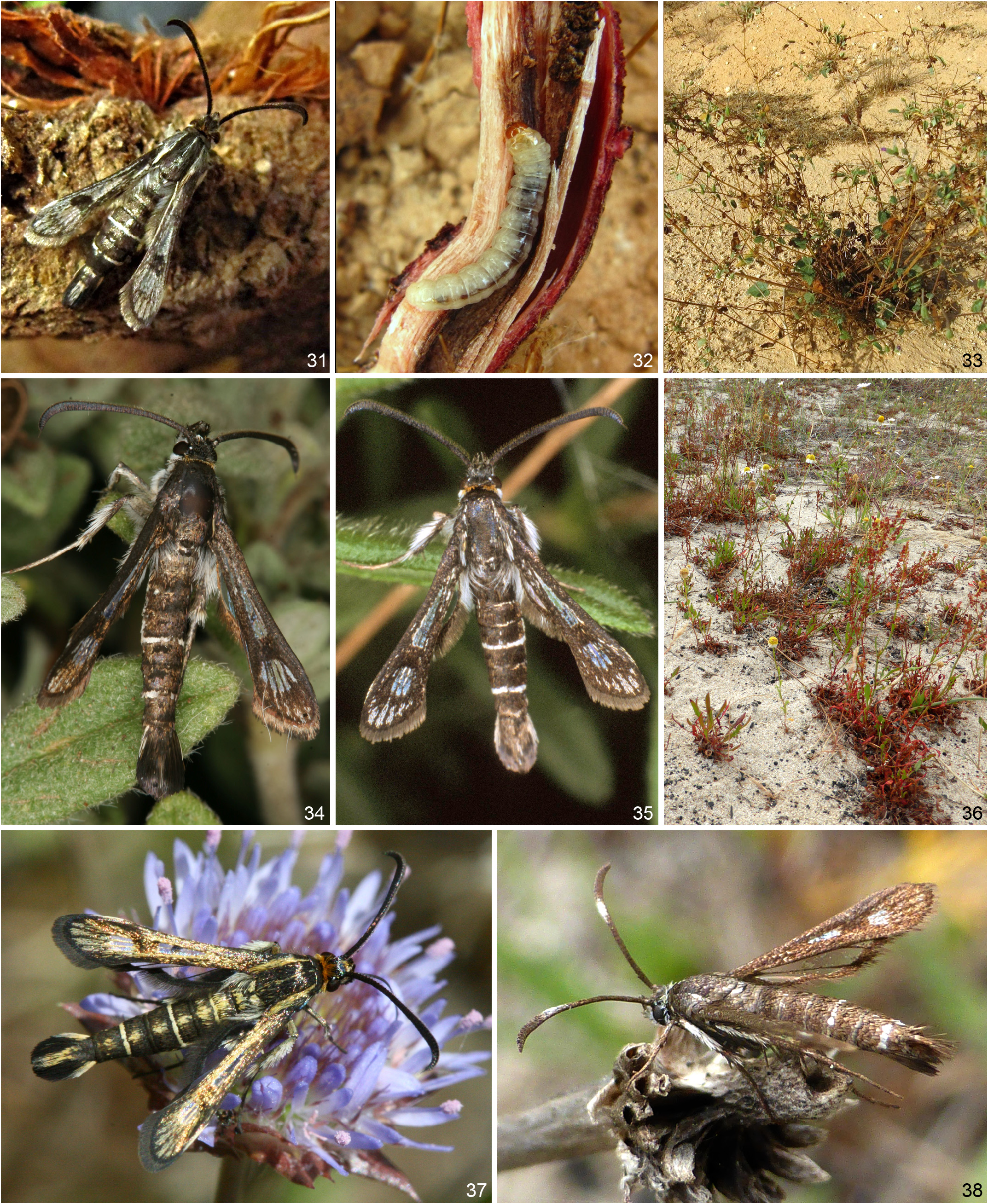