Bulliformis = bubble-like, referring to the appearance of cheilocystidia at lamellar edge.

The description which follows is compiled from examination of dried material. Colors when fresh may vary considerably from those below.

Basidiomata (Fig. 1A, B View Figure 1 ) diminutive, robust. Pileus 3-14 mm broad, convex, usually somewhat flattened over disc and occasionally with suggestion of small umbo, matt, sulcate near margin but not striate; disc near "Verona brown" 6E5; limb and margin near "sayal brown" 6C5 or "cinnamon buff" 6B4; context thin, fragile. Lamellae adnate to adnexed, not pseudocollariate, thin, becoming ventricose by maturity (-2.5 mm broad) and strongly crisped (dry), subdistant to distant with no anastomoses or interveining, total lamellae = 25-38, through lamellae = 13-18, (fresh) near "ochraceous buff" 5A5 to “chamois” 4B4, (dry) between "ecru drab" 16B2, "olive ochre" 2B8 and "deep olive buff" 3C3, suffusing to brown ("sayal brown" 6C5) from edge in age; lamellulae in 1-2 tiers, often rudimentary. Stipe 16-35 × 0.5-0.8(-1) mm, probably terete when fresh, equal, occasionally abruptly changing directions as though adventitious from being broken, subinsititious, pilose-vestured from apex to base, lightly so upward and there with vesture pallid, downward delicately barbed and more so to felty at base, producing a matted-furry appearance, irregularly elongate-maculate with blond vesture and fuscous pileus surface (dried), but somewhat more prominently vestured upward, upward "clay color" 5C6 or “cinnamon” 6B5, downward "snuff brown" 5E8 to "Verona brown" 6E5 at base, at junction with lamellae dark brown and leaving delicate brown ring in pileus trama. Rhizomorphs undetected. Taste and odor not recorded.

Proposal of another species of Gymnopus (Micromphale) section Perforantia   would seem problematic, especially from a region relatively rich in such taxa, but presence and uniqueness of diagnostic characters make such a proposal relatively safe. The diagnosis (above) lists characters which separate G. (Mi.) bulliformis   from other members of sect. Perforantia   with diminutive basidiomata.

The temperate rain-forests of the North American Pacific coastal region of United States and Canada apparently support several taxa of the androsaceoid/perforantioid complex. Loan of selected specimens (using Mycoportal as filter) under only Ma. androsaceus   and Mi. perforans   revealed enough new taxa to make intensive collecting worthwhile for such organisms. This might not be surprising, considering the variety of conifer trees, on the dead needles of which such diminutive basidiomata are to be found.

Separation of taxa in Micromphale sect. Perforantia   is difficult. Micromphale perforans   occurs in Europe and Scandinavia through northern North America, presumably continent-wide. It may be present in northeastern and western Siberia as well, but this is beyond the scope of this paper. From northern California comes M. sequoiae   which closely resembles G. bulliformis   but is reported as limited to dead foliage of Sequoia sempervirens   . Both taxa are reported as lacking (or rare) cheilocystidia, neither taxon exhibits much differentiation in the pileipellis, and caulocystidia are quite similar, although those of M. perforans   are reported as exhibiting some denser, more refringent (PhC) pigment at caulocystidial tips. Ordinarily, M. perforans   exhibits a black, vestured stipe when mature, but Antonín and Noordeloos (2010) include dark brown shades as well, and M. sequoiae   seems also to form a dark brown stipe. Desjardin (1985) used the following characters to separate M. sequoiae   from M. perforans   : 1) light brown to flesh-colored pileus versus pale pileus respectively; 2) mild odor versus strong, fetid odor respectively; 3) greyish orange to brown pubescent stipe versus black velutinous stipe respectively; 4) caulocystidia without concentrated apical pigment versus caulocystidia with concentrated apical pigment respectively; 5) habitat on Sequoia   debris versus conifer needles, usually Picea   and/or Abies   respectively.

Attempts were made to obtain ITS sequences from both collections of G. bulliformis   , both unsuccessful. WTU-9305 yielded sufficient sequence to identify it as a member of the clade /perforantia and blasted weakly to G. perforans   in GenBank. Whether G. bulliformis   deserves phylogenetic distinction remains questionable until clean sequences can be obtained from “fresh” material. 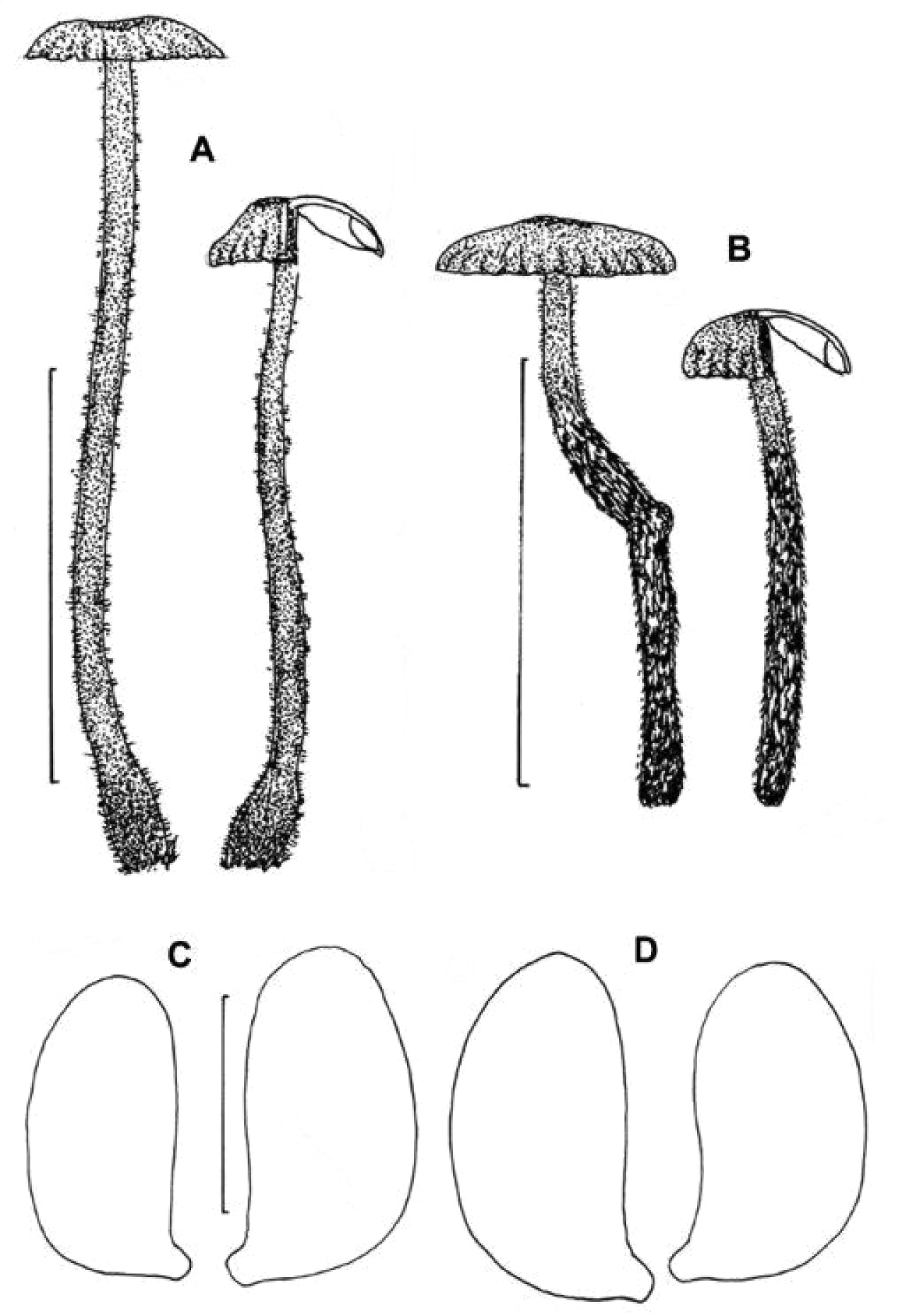 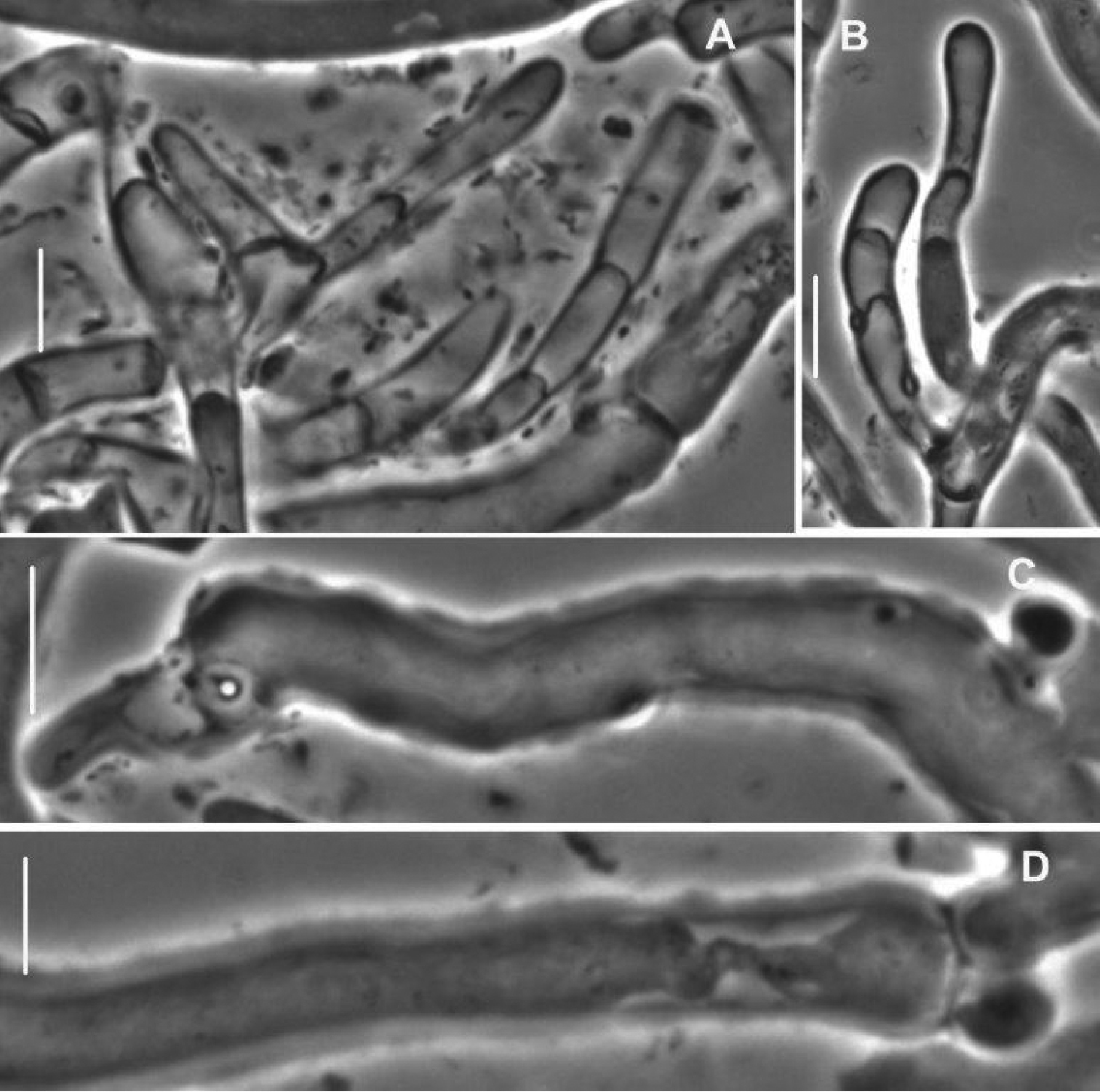 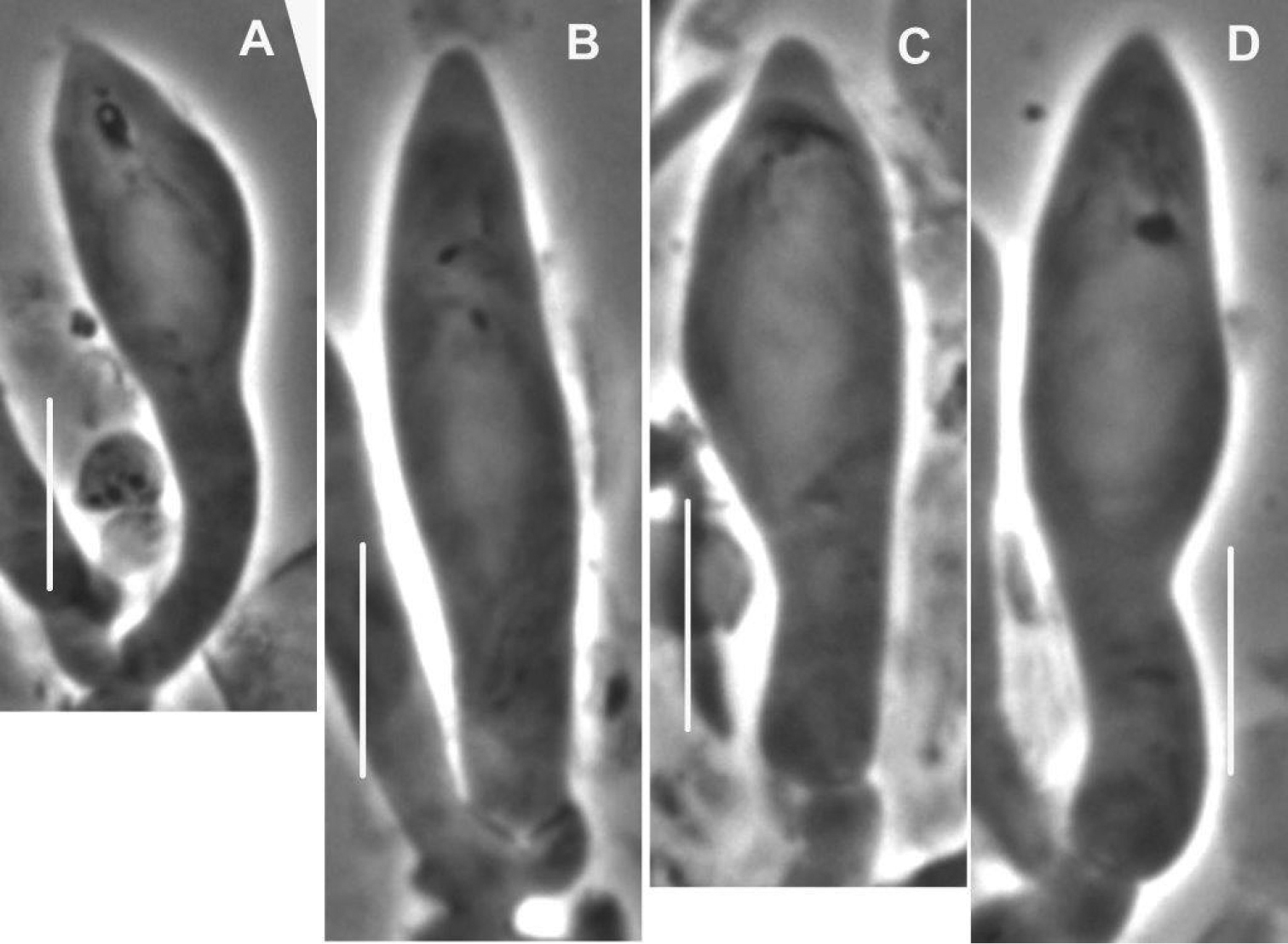 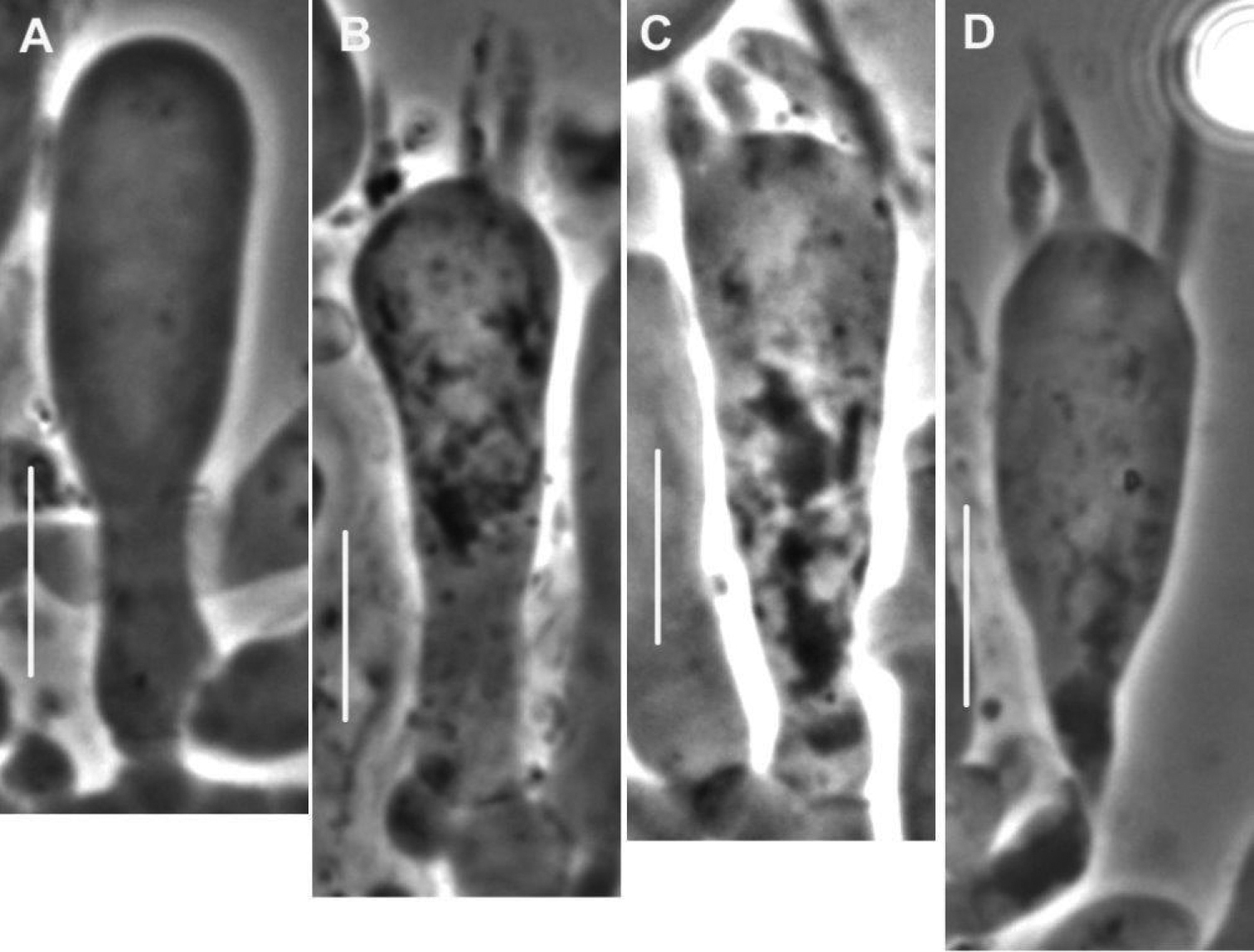 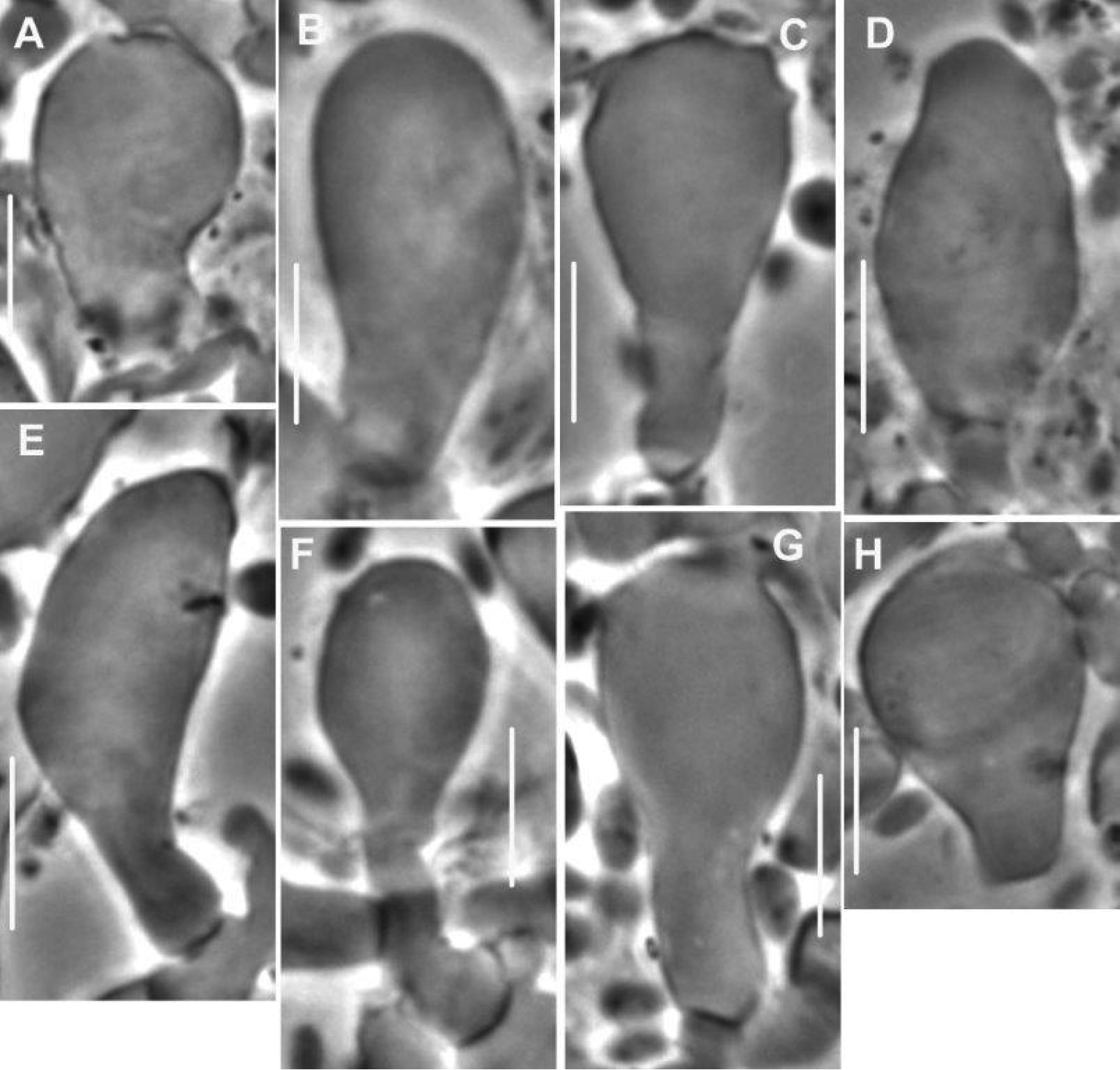 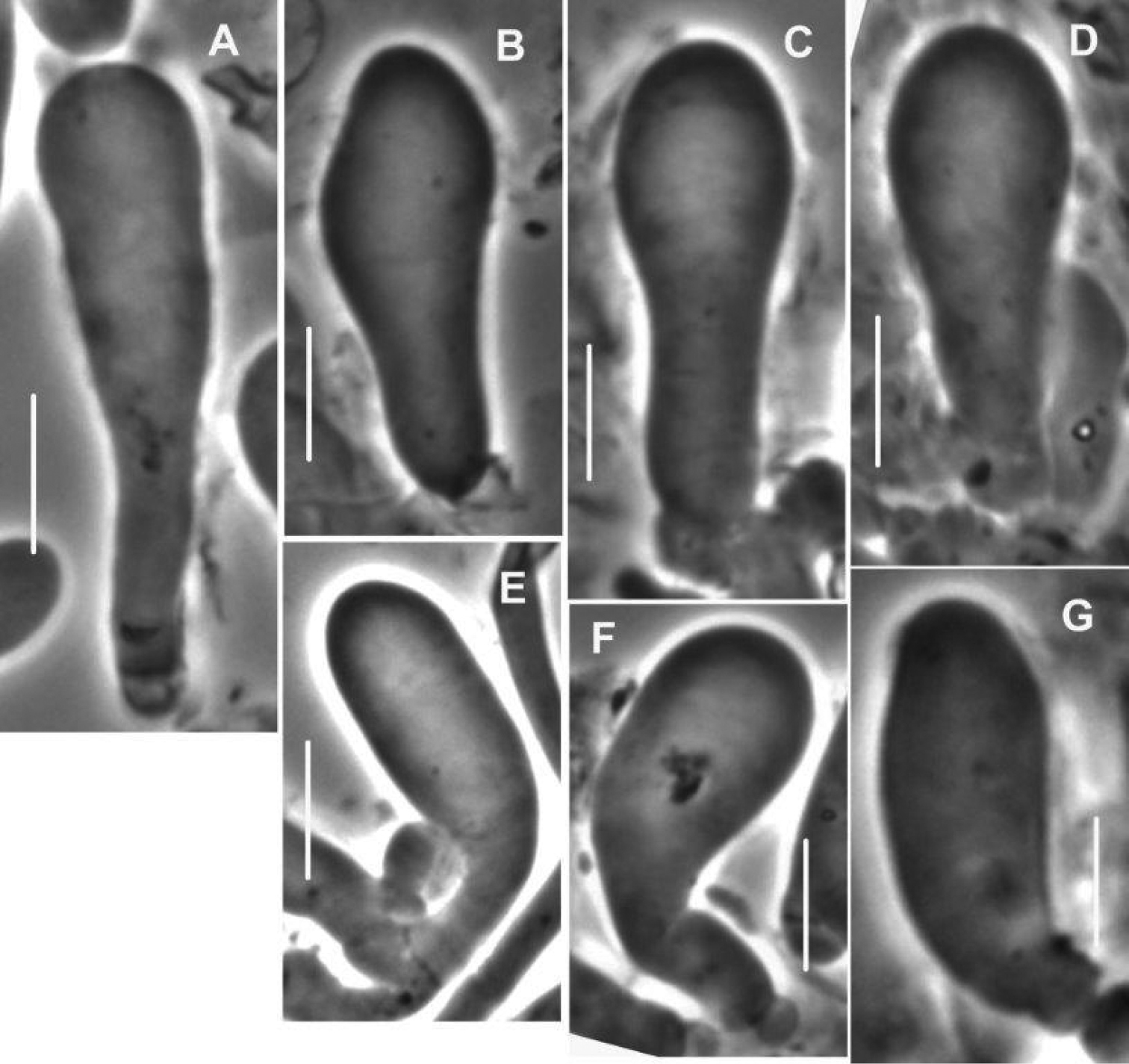 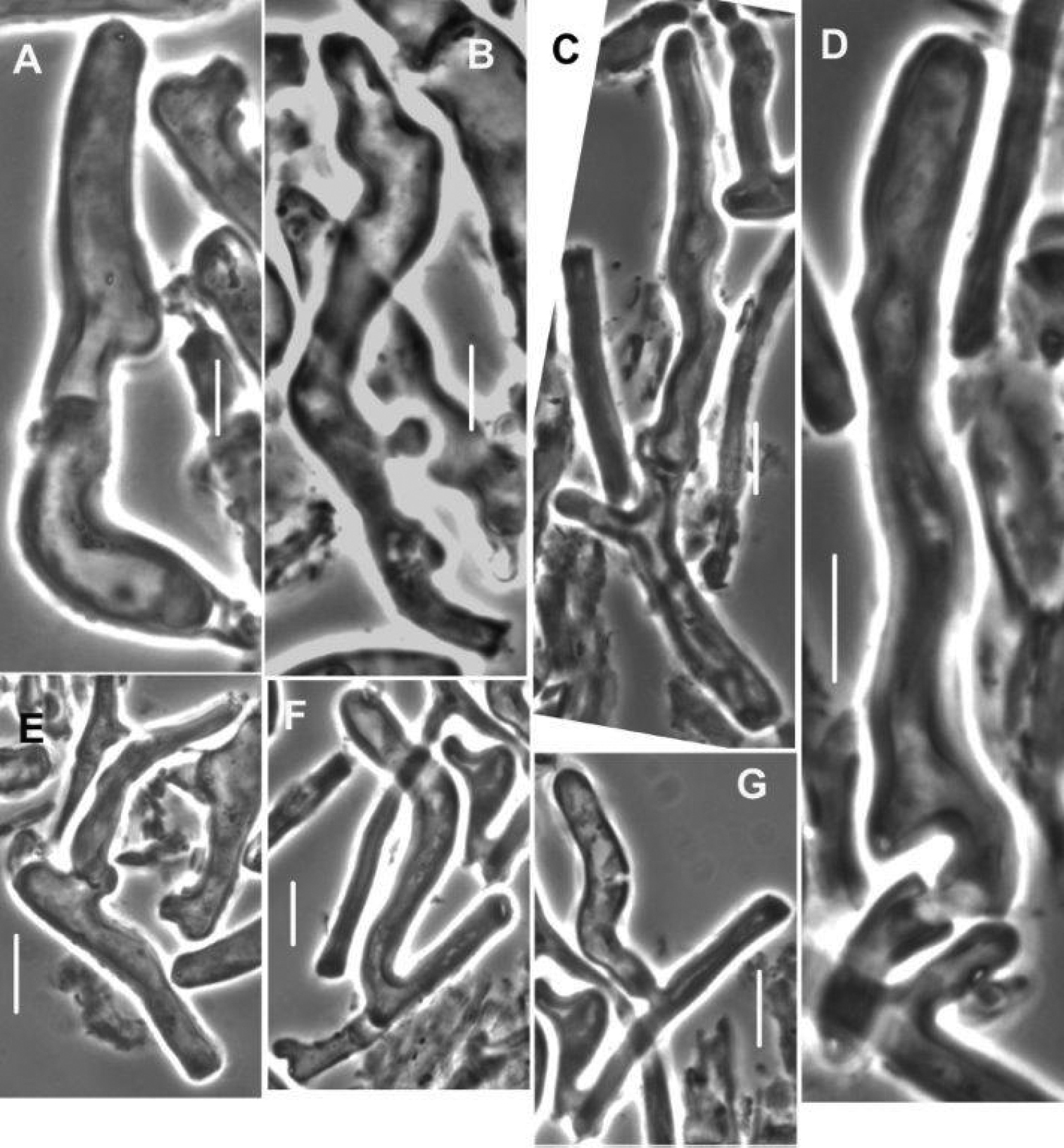 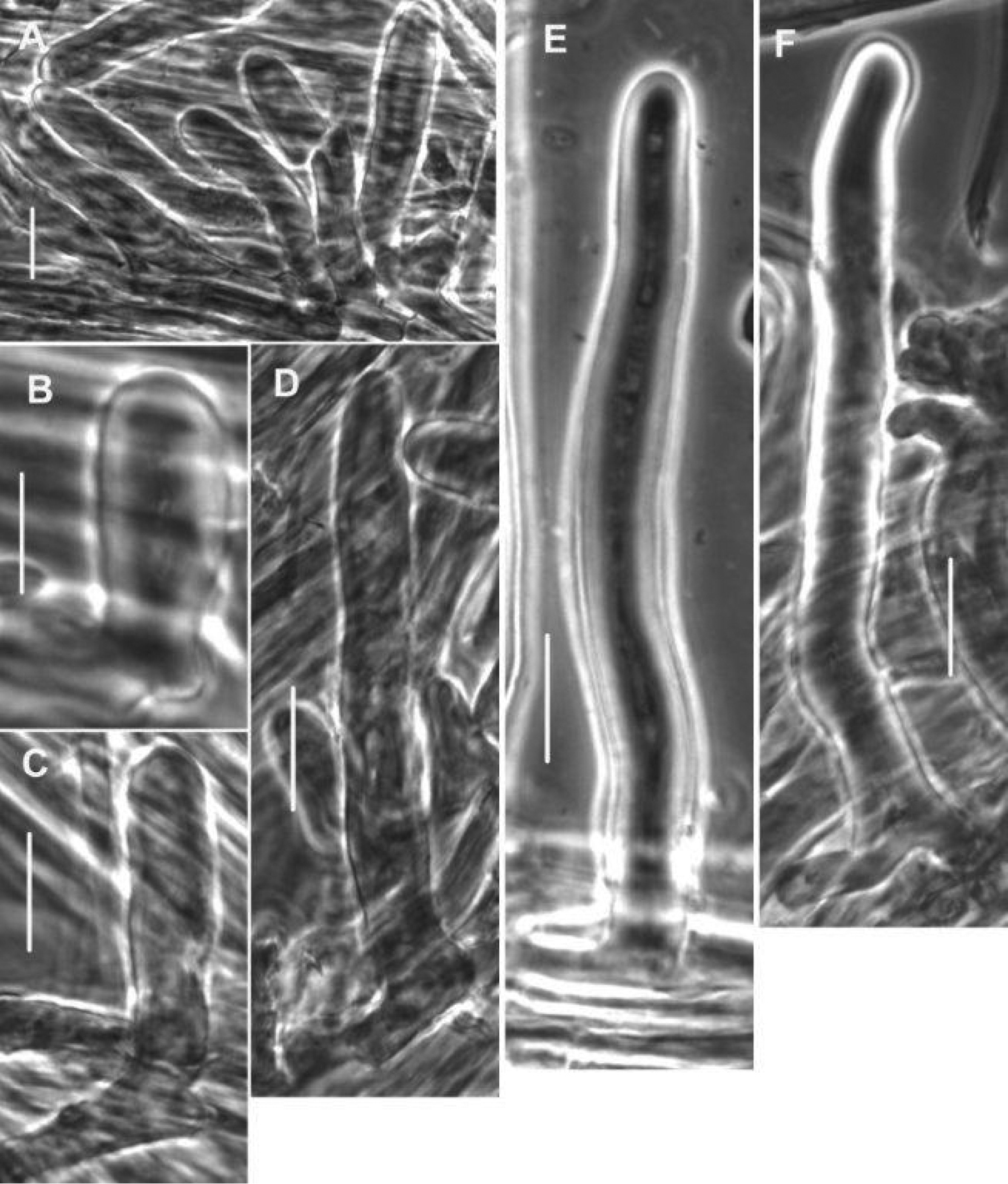