Etymology. The species name coriariformis reflects the close similarity of the asexual generation gall of this species to the gall of Andricus coriarius (Hartig) .

Closely resembles also Andricus quercustozae (Bosc) , A. tomentosus (Trotter) , and A. dentimitratus (Rejtö) in the presence of median mesoscutal line, however, in A. coriariformis , new species, the metasoma shorter than head+mesosoma, metasomal tergite 2 with dense white setae only in the ventro-lateral half, without setae in dorso-lateral half of tergite, while in other three mentioned species the metasoma is longer than head+mesosoma, metasomal tergite 2 with uniform dense white setae on the entire lateral surface of tergite.

Metasoma slightly shorter than head+mesosoma, all tergites with dense white setae only laterally; all metasomal tergites without punctures; prominent part of ventral spine of hypopygium 5.0 times as long as broad. Body length 2.8–3.8 mm.

Gall ( Figs 116–119 View FIGURES 116–119 ). On lateral and terminal shoot buds, on both young and old trees. The gall of Andricus coriariformis has a smooth, almost polished surface, and bears a small number of thick spines that are commonly oriented in the same direction, like the fingers of a hand ( Figs 116, 117, 119 View FIGURES 116–119 ). The spines are not usually strongly curved. The mature gall is usually 20 mm or less in greatest dimension, pale straw yellow, hard and woody. The gall is usually multilocular, containing from 2 to many larval chambers (very rarely only one larval chamber was observed). Similar galls are induced by A. coriarius and A. stellatus (new species, see below). Both of these galls have longer and diverging striated spines (few to many in A. coriarius , most commonly 4 in A. stellatus ). The galls of both of these species also have a dull, sometimes pubescent surface and Andricus coriarius galls are commonly larger than A. coriariformis , reaching 50 mm in diameter including the spines.

Biology. Only the asexual generation is known from galls on Quercus infectoria Olivier. Rare. The gall starting to grow by mid-summer; adult wasps emerged by the end of autumn.

Comments. This species was initially detected on the basis of DNA sequence data for the mitochondrial cytohrome b gene and the nuclear 28S D2 region ( Challis et al. 2007). Although originally identified as Andricus coriarius on the basis of overall gall morphology, all adults with the above described phenotype belong to a single well-resolved clade that diverged from A. coriarius approximately 4.5 million years ago. It remains unclear whether this species is a sister group to Andricus coriarius , or is more distantly related within the A. kollari species group ( Challis et al. 2007).

The extreme rarity of purely asexual lifecycles in oak gallwasps ( Stone et al. 2002) suggests that A. coriariformis p robably has a sexual generation. The clade of Andricus species that includes A. coriariformis all have lifecycles involving alternation between oaks in the sections Quercus (for the asexual generation) and Cerris (for the sexual generation). The sexual generation galls in this clade are commonly small and inconspicuous bud or catkin galls ( Melika et al. 2000; Cook et al. 2002; Rokas et al. 2003b), and it is probable that the same is true for this new species. Possible hosts from the Cerris oak section in the region include Quercus libani Olivier and Q. brantii Lindl. (= Q. persica Jaub. et Spach ). 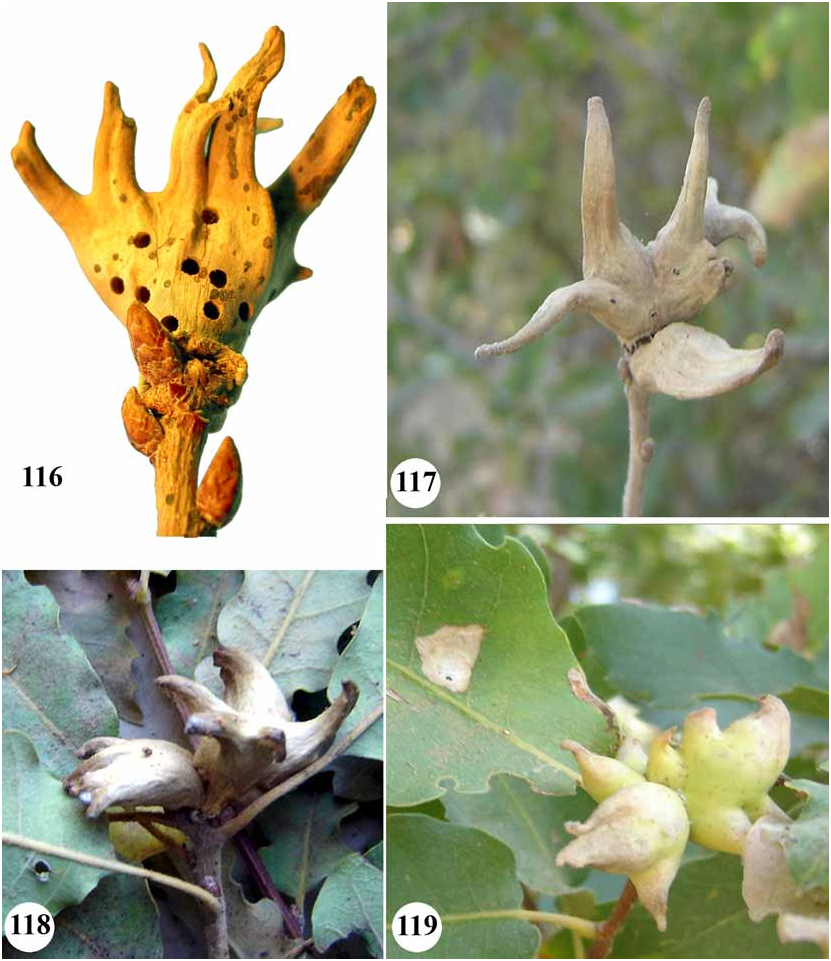