Etymology. Pendraig   from the Welsh Pen (head, chief or top) and Draig (dragon), literally meaning ‘chief dragon’ but used in a figurative sense in Medieval Welsh to mean ‘chief warrior’. The anglicized form, Pendragon, was the epithet of Uther, father of King Arthur in medieval legend. Milnerae, in honour of Dr Angela C. Milner (1947–2021), in recognition of her major contributions to vertebrate palaeontology, including as one of the leading experts on British theropod dinosaur fossils [ 53], and to the Natural History Museum, London, where the type specimen is held.

Diagnosis. Pendraig milnerae   is a small-sized non-averostran theropod (estimated femoral length: 10.21 cm; lower 95% CI: 8.60 cm; upper 95% CI: 12.08 cm; see below) that differs from other dinosaurs in the following unique combination of character states present in the holotype (autapomorphies indicated with an asterisk): posteriormost dorsal vertebrae with a strongly elongated centrum (centrum length ca 2.6 times its anterior height), ilium with a distinctly anteroventrally slanting dorsal margin of the preacetabular process, and posterodorsal margin of the postacetabular process curving abruptly posteroventrally and, as a result, the posteroventral end of the process is formed by an acute angle of approximately 65° in lateral view *; pubis with pubic fenestra; ischium with well-developed obturator plate but without posteroventral projection forming a deep U-shaped or V-shaped notch with the shaft; and femur with fourth trochanter posteriorly developed to a height similar to the mid-depth of the shaft at that level. In addition, the referred middle–posterior dorsal vertebra differs from other early neotheropods in the absence of an accessory hyposphene–hypantrum articulation, and the presence of an anteriorly expanded neural spine *.

Holotype. NHMUK PV R 37591: An articulated vertebral series and pelvic girdle comprising the two posteriormost dorsal vertebrae missing most of the neural spines, the three anteriormost sacral vertebrae and a small fragment of the centrum of the fourth sacral, a complete left ilium, a largely complete left pubis missing the distal end, a left ischium missing most of the distal portion, a largely complete right pubis missing the distal end, and a right ischium missing most of the dorsal and distal portions (field number P77/1) ( figures 1 View Figure 1 and 2 View Figure 2 ). Additionally, a left femur was found disarticulated from the left hemipelvis in the same block (field number P76/1). It has been completely freed from the matrix and is confidently referred to the same individual as the vertebral column and pelvis ( figure 3 View Figure 3 ).

Referred material. NHMUK PV R 37596 (field number P83/1): A complete middle to posterior dorsal vertebra completely freed from matrix ( figure 4 View Figure 4 ).   NHMUK PV R 37597 (field number P65/66b): the proximal end of a left ischium preserving the articular facet with the left ilium ( figure 5 View Figure 5 ).   A counterslab to this specimen, listed as field number P65/66a and comprising the base of the distal portion and part of the proximal expansion of the ischium, was described and figured in the unpublished PhD thesis of Warrener [ 41]. However , there is no record of this specimen in the collections at NHMUK and it is therefore not considered here.

Ontogenetic assessment. The limited material currently referable to P. milnerae   limits interpretations of intraspecific variation related to ontogeny, and, therefore, a comprehensive assessment of maturity cannot be provided. However, we approximate the ontogenetic stage of the holotype NHMUK PV R 37591 by scoring it for the maturity assessment matrix that has been formulated for early theropods ( Coelophysis   bauri and M. rhodesiensis) and a non-dinosaurian dinosauriform ( Asilisaurus   kongwe) [ 54 – 56]. Based on the results of our phylogenetic analysis (see below), these taxa provide a narrow phylogenetic bracket for P. milnerae   , and the characters are, therefore, likely suitable for approximating the maturity of this new taxon (see also [ 57]). However, it is important to consider that it cannot be confidently ascertained whether all characters that were scored are truly ontogenetically dependent for this specific taxon. Out of 32 characters of the maturity assessment matrix, 16 could be scored for NHMUK PV R 37591. Eight characters were scored as mature (1) and another eight were scored as immature (0). None of the characters considered highly informative of maturity (see fig. 22 a in [ 54]) are scored as 1, nor are any of the characters considered highly informative of immaturity scored as 0. Of the sequence order of mature state attainment (between 1 and 29) [54,57], NHMUK PV R 37591 has a relative minimum maturity of 5 based on the presence of a mound-like dorsolateral trochanter on the femur (character 16, state 1 [ 16 – 1]), the presence of the linea intermuscularis caudalis on the femur (18–1), and the presence of an ‘obturator ridge’ on the femur (20–1), and a maximum maturity of 19 based on the co-ossification of less than four sacral vertebrae (2–0), the absence of co-ossification between the ilium and pubis (8–0), the absence of an ‘anterolateral scar’ on the femur (19–0), and the presence of a gracile and thin fourth trochanter of the femur (23–0). The relative maximum maturity indicates that the holotype of P. milnerae   was likely not fully skeletally mature, but the relatively large number of characters scored as 1 indicates that it likely also did not represent an early ontogenetic stage. For example, the holotype of P. milnerae   is interpreted as more skeletally mature than the type specimens of Liliensternus liliensterni and as mature as or potentially more mature than the holotype of Gojirasaurus quayi [ 57], which are considerably larger than the new taxon. 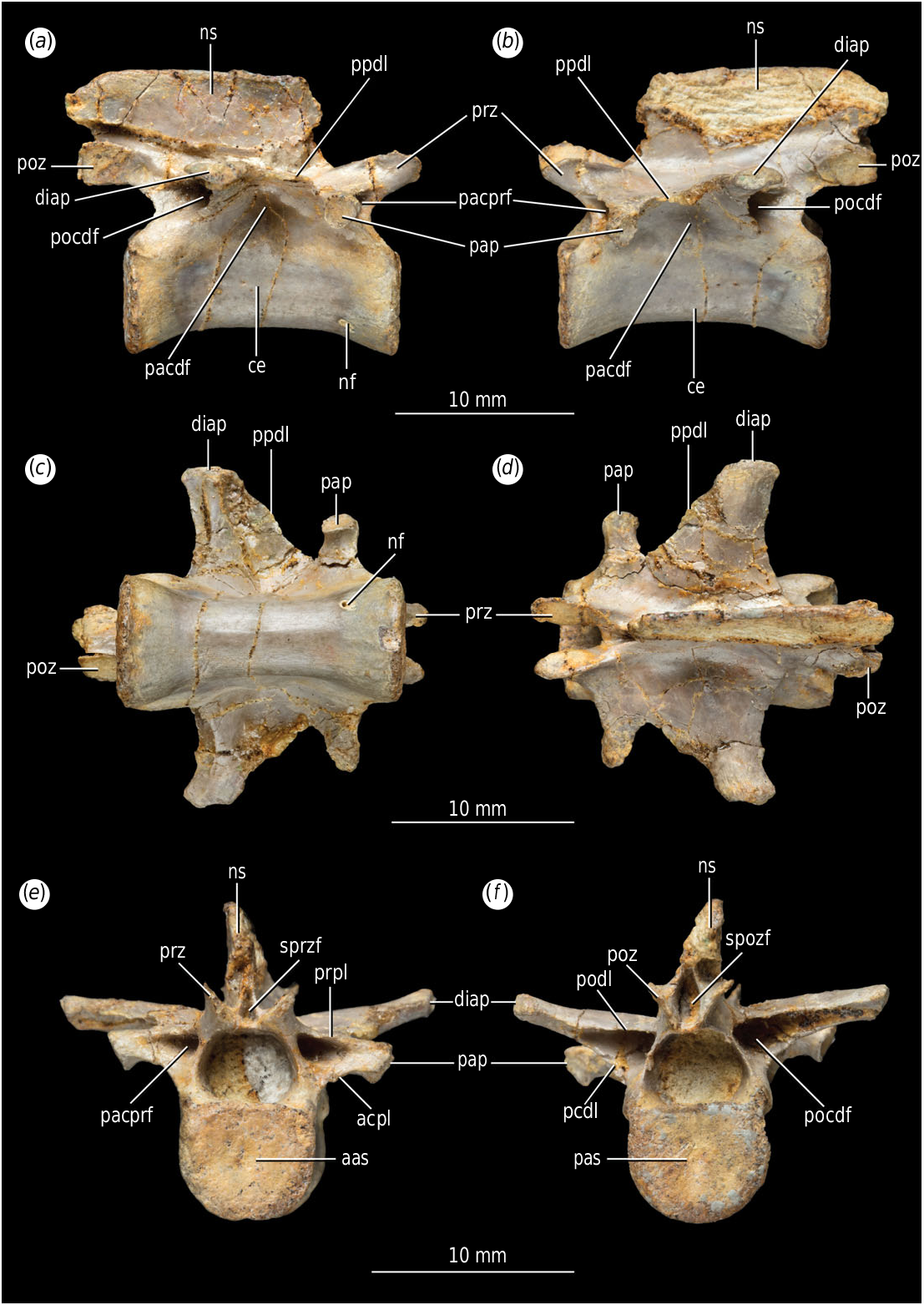