Etymology: named for the paradoxical occurrence of this species in the New World, when the genus was previously considered strictly Old World.

Biology: Bothriomyrmex paradoxus   is known from two different collections from widely separated localities in Costa Rica ( Fig. 1 View FIGURE 1 ). One collection was made in February 2003, during the Project ALAS expeditions to the 500m site on the Volcan Barva transect. The expeditions were based at the "El Ceibo" guard station, on the west bank of the Rio Peje. The station building itself is in pasture abutting mature rainforest. A few meters inside the forest a large tree had fallen sometime during the months prior to the expeditions. A few of the tree's leaves were still green; most were brown but still attached to branches. There were still extensive epiphyte mats covering the trunk and major branches. Longino collected from beneath these mats and found Bothriomyrmex   workers and brood piles to be abundant beneath most of the mats. Large Margarodidae   ( Hemiptera, Coccoidea   ) were also scattered amongst the Bothriomyrmex   . Other ant species occurred under the mats and were somewhat interdigitated with the Bothriomyrmex   , although much less abundant. These included Hypoponera opacior   , a small yellow Solenopsis   , and Tapinoma   . Smaller nests or aggregations were also found of Crematogaster sotobosque   and Pheidole biconstricta   . One part of the tree, near the pasture edge, was being invaded by Solenopsis geminata   . I found only workers and brood. Ronald Vargas of Project ALAS collected more from the same tree in April. His collections included two adult males.

The second collection was also made in February of 2003. John Noyes of The Natural History Museum (London) was taking large sweep samples from vegetation at several Costa Rican localities and extracting Encyrtidae   , his primary focal taxon. He also separated ants and sent these samples to Longino. Each sample contained hundreds to thousands of ants, including many alates. In the sample from Estación Cacao were about a dozen males and a similar number of dealate queens of Bothriomyrmex   . The habitat at Estación Cacao is a mosaic of mature montane moist forest with epiphyte­laden trees and abandoned pastures. This is a site on the Pacific slope of the northern­most cordillera in Costa Rica, 170km from the El Ceibo site on the Atlantic slope.

Comments: Although it is typical to choose workers as holotypes of ant species, we have chosen a queen because queens exhibit much greater morphological differences among species in Bothriomyrmex   . This is true of several dolichoderine genera, including Azteca   and Tapinoma   . For example, Longino (1991) used queens as holotypes in taxonomic work on Azteca   .

The new species undoubtedly belongs to the genus Bothriomyrmex   . It has all the traits typical of the genus: 4: 3 palp formula, strongly reduced hypostomal margin, and a characteristic venation on the forewing of the queen (closed discoidal cell, RM­ 2 absent, and radius reaching costal margin of wing). The systematics of the genus Bothriomyrmex   are complex, and the previous classification ( Dubovikoff, 2002) is not complete. Bothriomymex paradoxus   belongs to Bothriomyrmex   s.s. and not among the Asian and Australian species (Dubovikoff unpub.). However, it does not fit cleanly into one of the Palearctic species groups. The short suberect setae on the queen's mesosoma and gaster is a trait also found in members of the B. syrius   group ( B. syrius Forel   , B. turcomenicus Emery   , B. communistus Santschi   , B. kusnezovi Emery   and B. urartus Dubovikoff   ). However, B. paradoxus   differs from all species of this group by the higher and shorter mesosoma of the queen. TI of B. paradoxus   is 0.64, while other species have TI <0.50. Also, the impressed metanotal groove on the worker is a trait found in members of the B. gibbus   complex and not in the B. syrius   group. 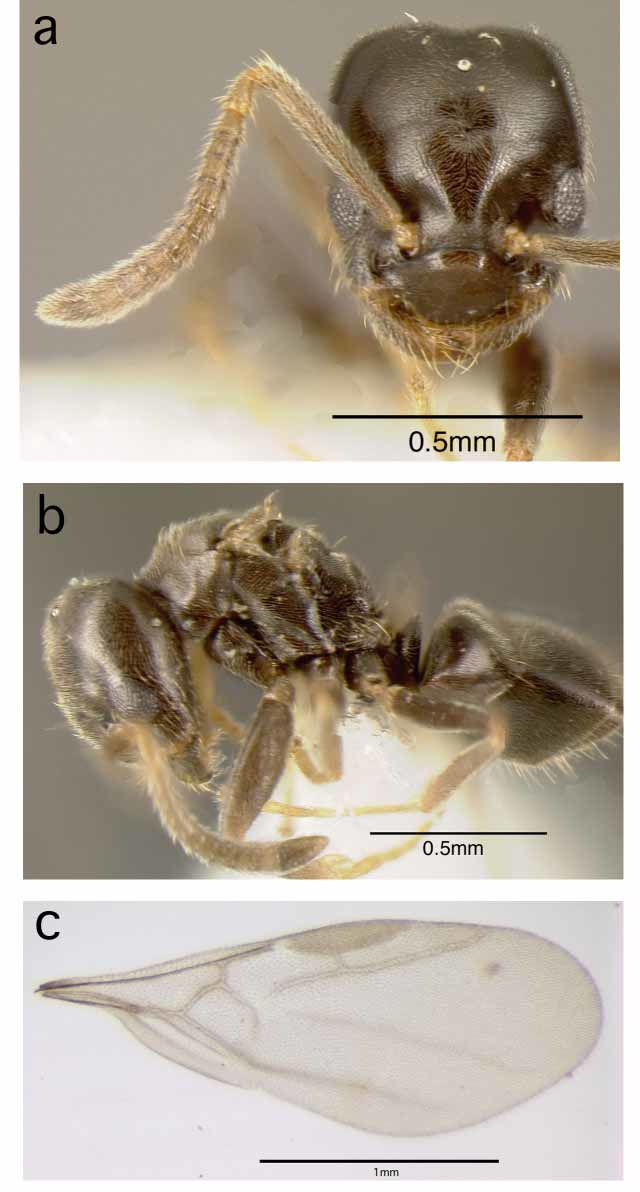