Etymology. This species is named in honor of Robert W. Bryson, Jr. for his contributions to the biogeography of scorpions. Dr. Bryson also kindly provided the specimens used in this study as well as photographs of their locality.

MALE. The following description is based on holotype male from the Musquiz Canyon , Jeff Davis County, Texas, USA. Measurements of the holotype male and six paratypes are presented in Table 1 View Table 1 . See Figure 1 View Figure 1 for photographs of live paratype male and female specimens   .

TELSON   ( Fig. 9 View Figures 2–9 ). Vesicle fairly robust with some lowprofile granules located on the ventral surface; slight setation on ventral surface. Aculeus with medium curve, well delineated from the vesicle when viewed ventrally. The subaculear setal pair is located on the vesicle/aculeus juncture. A vesicular linear patch on the dorsal surface is absent. Vesicular tabs with a single small curved spine.

HEMISPERMATOPHORE ( FIG View Figure 12 . 12, three paratype males). Lamina edges subparallel, terminus truncated with a subtle distal crest on the dorsal side (also visible from the ventral side due to the structure’s translucency). Lamellar hook elongated, distinctly bifurcated, and originating from the dorsal trough. A secondary lamellar hook and basal constriction are absent. Right hemispermatophore length is 4.20 mm, lamina length is 2.50 mm, lamellar hook length is 1.05 mm, and trough difference is 0.50 mm. Lamellar hook length to lamina length ratio is 0.420 and trough difference to lamellar hook length ratio is 0.476. Mating plug with a smooth barb, its distal edges essentially straight, thus not “crescent-shaped”. Projections from brace-A and brace-B of the base are absent. A stem projection is present at its base.

Male and female variability. Of the seven specimens available for this study, only one is a female and deemed here to be subadult. Therefore, our comparison of the two genders is limited. Though the male has a slightly thinner metasoma in segments II–V, the MVDs (L/W) only range from 1.0 to 3.1 %. The chela fixed finger, however, is definitely shorter in the male when compared to the metasomal segment lengths which are relatively longer, in particular segments II–V, exhibiting sizable MVDs ranging from 22.4 to 25.5 %. The number of median denticles (MD) on the chelal fixed finger are essentially the same in both genders, male 48–55 (52.167) [12] and female 52–53 (52.500) [2]. Pectinal tooth counts in males exceed those of females by only one tooth, male 10–12 (11.083) [12] and female 10–10 (10.000) [2]. The genital operculum sclerites are fused medially except for the posterior one-third in the female, whereas they are separated along their entire length in the male, exposing developed genital papillae. See Appendix A for further statistical information.

The three western Texas populations of P. brysoni   studied for this paper are located in close proximity, only 30 kilometers separate all three. The altitude of the three localities only varies 390 m. Each population is represented by two adult males each and, morphometrically, exhibit consistency in all ratio comparisons. When all possible ratios were calcuated for comparison with the other three species (351 ratios in all), the coefficient of variability (i.e., sdev/mean) for P. brysoni   was quite small, ranging only 0.002–0.059 (0.030) for the six males. This implies total consistency across the six males representing three locations for all morphometric ratio comparisons.

The four species currently placed in “ apacheanus   ” group of Pseudouroctonus   , including new species P. brysoni   described in this paper, are essentially structured the same. All roughly the same size, adult males 21–27 and females 29–32 mm in length, all have the same general carinal structure development with heavy granulation, and all with the same number of pectinal tooth counts, 10– 12 males and 9– 11 females, etc. Trichobothrial patterns are essentially identical, all exhibiting the same diagnostic positions considered in the genus. Except for the unusual brace projections exhibited on the hemispermatophore mating plug in species P. santarita   , there are no exceptional structural differences between the four species. Therefore, morphometric ratio comparisons are relied upon heavily to separate these four species. Also, since ratio comparisons indicate the relative length of the chelal fingers, we have also relied on the counts of median denticles (MD), in particular important for species with proportionally short or long chelal fingers as indicated by morphometric comparisons. Following is a key to the four species of the “ apacheanus   ” group of Pseudouroctonus   , reflecting the molecularbased phylogeny suggested by Bryson et al. (2013: fig. 3). 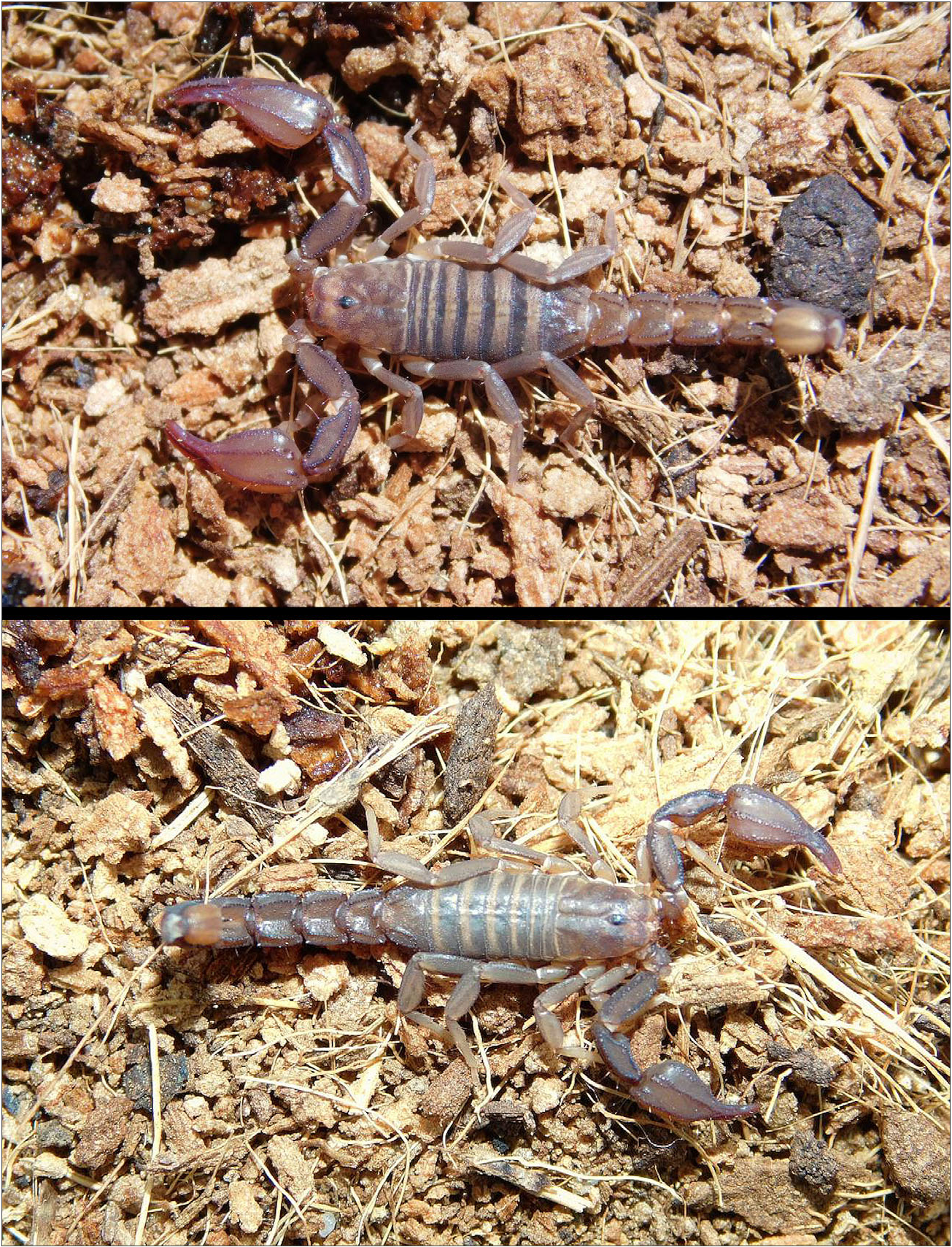 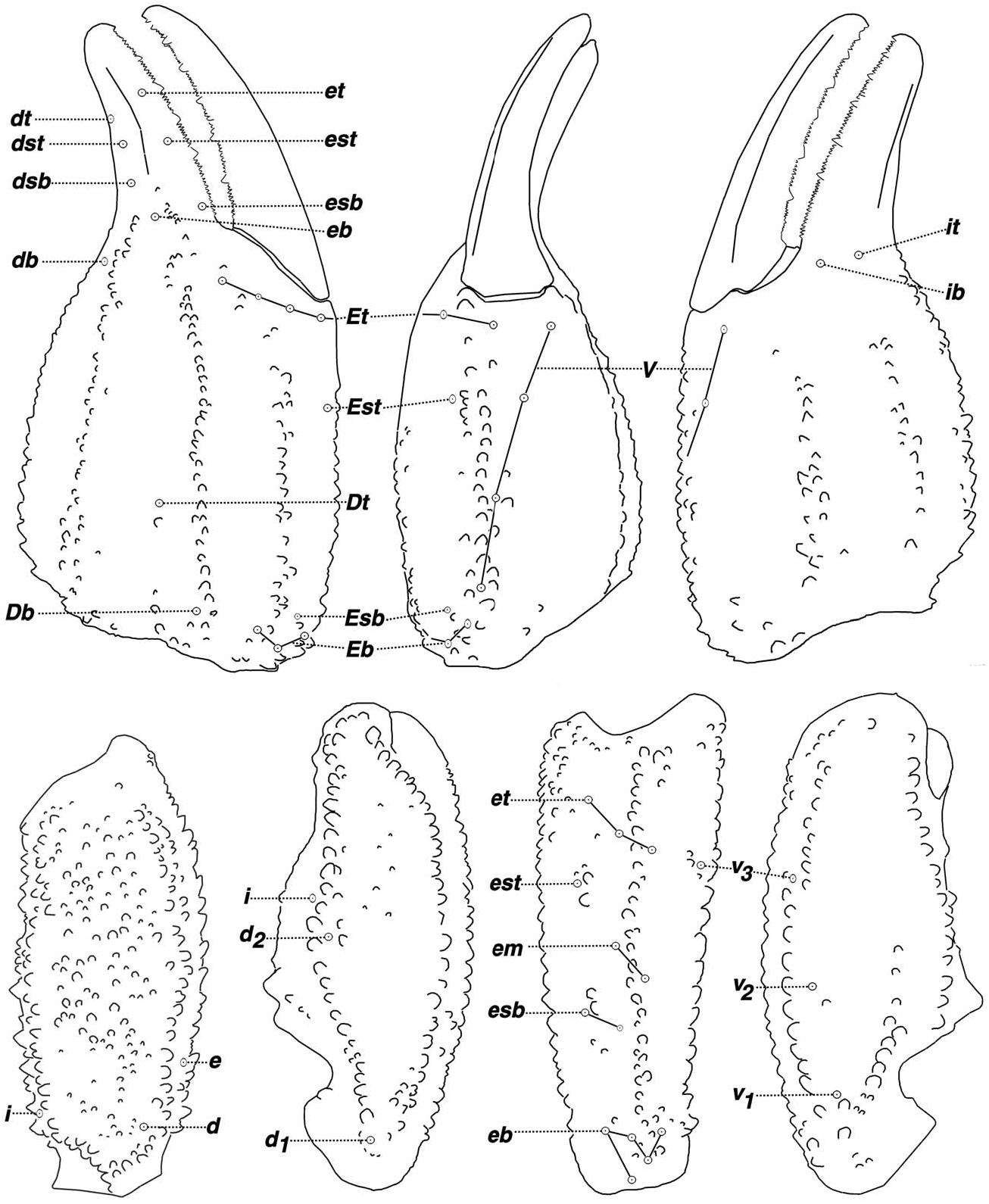