Etymology. The specific name is used as a noun in apposition and makes reference to the unique morphology of this species. In fact, when first examining the single specimen, we were unable to decide whether it belonged to the genus Boophis   , or to the genus Spinomantis   in the subfamily Mantellinae   . The specific name is therefore a composite of these two generic names, and also makes reference to the dermal flaps and tubercles and tubercles and spines characterizing the species.

Diagnosis. Assigned to the genus Boophis   based on the presence of an intercalary element between ultimate and penultimate phalanges of fingers and toes (verified by external examination), presence of nuptial pads and absence of femoral glands in the male, absence of gular glands in the male, enlarged terminal discs of fingers and toes, lateral metatarsalia separated by webbing, absence of outer metatarsal tubercle, molecular phylogenetic relationships (see Vieites et al. 2009 for a complete molecular analysis of Boophis   ), and overall similarity to other Boophis species.   Assigned to the Boophis goudoti   group based on the following combination of characters: relatively large size (male SVL 57 mm), brownish dorsal ground colour, non-transparent ventral skin, absence of red ventral colour; presence of webbing between fingers; apparently single subgular vocal sac; presence of vomerine teeth; and especially the molecular phylogenetic relationships of the species (see Vieites et al. 2009). Boophis spinophis   differs distinctly from all described species in the B. goudoti   group by strong genetic differentiation (see below), dorsal colouration and distinct dermal tubercles along the lateral parts of the tarsus and around the elbow (in life). It furthermore differs from B. boehmei   , B. rufioculis   , B. burgeri   , B. reticulatus   , and B. axelmeyeri   by its larger size (SVL of the single known male 56.5 vs. 27–43 mm in the other mentioned species, see Glaw & Vences 2007) and from most of these species by iris colouration (absence of red colour in the outer iris area as is typical for B. axelmeyeri   , B. boehmei   , and B. rufioculis   ; presence of a strong pattern of dark stripes in iris which are absent in B. burgeri   and usually less expressed in B. reticulatus   ). It also differs from B. goudoti   and B. periegetes   by the presence of a distinct dark pattern in the iris.

Natural history. Largely unknown. The single known specimen was collected at night along a stream next to Ambatolahy, in disturbed rainforest, perched on the vegetation and not emitting any call.

Molecular relationships. This species turned out to be phylogenetically highly divergent from all other species in the B. goudoti   group, with pairwise distances>9% to all species. Phylogenies based on additional mitochondrial genes (not shown here) confirm, however, that B. spinophis   belongs indeed into this group. The sequence of the holotype and single specimen from Ambatolahy clusters with high support together with a sequence that refers to a juvenile specimen from Ambohitantely (ZSM 118/2005, not studied here). The divergence between these two sequences is quite high (3.5%), indicating that these two geographically distant populations are possibly not conspecific.

Distribution. At present Boophis spinophis   is only reliably known from its type locality, a forest patch just outside Ranomafana National Park, near the village of Ambatolahy (Appendix 10). A second locality, Ambohitantely, is supported by DNA barcoding analysis (low pairwise sequence divergence) of a juvenile specimen from this site, but the corresponding sequence had a substantial differentiation and the identity of this population requires further study (see section on molecular relationships above). 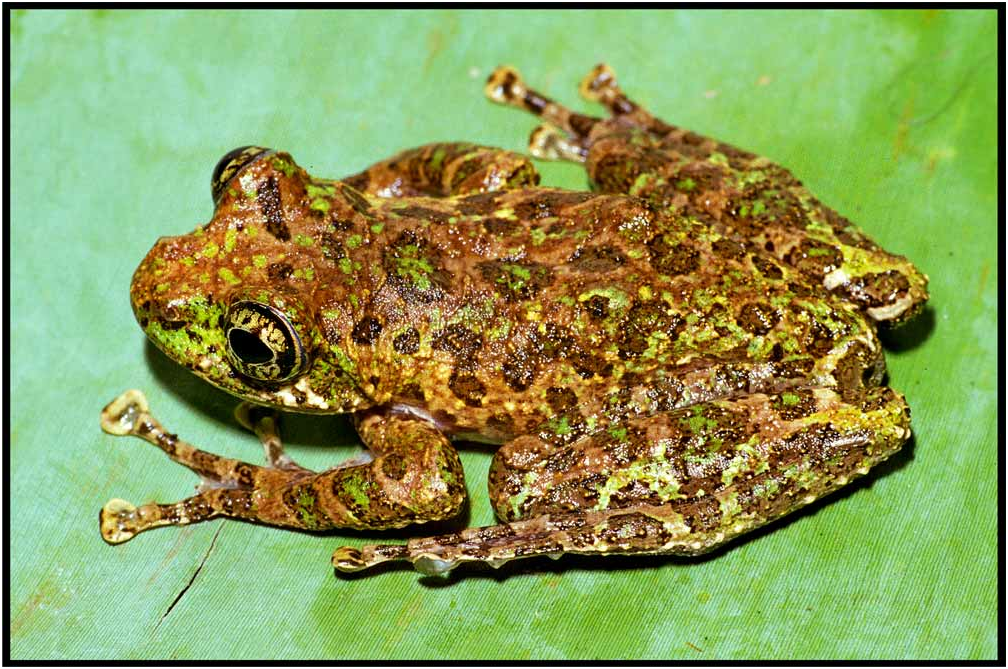