Etymology. Ignacio De la Riva dedicates this species to his daughter Lucia, as compensation for the time he spends doing field work abroad, something she rather dislikes.

Diagnosis. Assigned to the genus Boophis   based on the presence of an intercalary element between ultimate and penultimate phalanges of fingers and toes (verified by external examination), absence of femoral glands in males, absence of gular glands in males, presence of axillary amplexus, enlarged terminal discs of fingers and toes, lateral metatarsalia separated by webbing, absence of outer metatarsal tubercle, molecular phylogenetic relationships (see Vieites et al. 2009 for a complete molecular analysis of Boophis   ), and overall similarity to other Boophis species.   Assigned to the Boophis albipunctatus   group based on the following combination of characters: small size (male SVL 24–31 mm); absence of tubercles or flaps on heel and elbow; presence of webbing between fingers; indistinct canthus rostralis; dorsal colouration translucent green with many small white dots in life and yellow-whitish in preservative; absence of red ventral colour; ventral skin in life non-transparent; single subgular vocal sac; presence of vomerine teeth; molecular phylogenetic relationships; and its high morphological similarity to B. albipunctatus   and B. sibilans   . The new species differs from all other species in the Boophis albipunctatus   group by its strong genetic differentiation (see below). Along a stream near Andasibe, B. luciae   occurs in syntopy with B. albipunctatus   and B. sibilans   . Within the B. albipunctatus   group, the new species belongs to a clade of morphologically very similar species ( B. albipunctatus   , B. luciae   , B. sibilans   ) characterized by (1) presence of well-defined brown markings on the iris, and (2) presence of a dense dorsal spotting with small and sharply defined white spots. Within this complex of species, B. luciae   is characterized by its usually smaller body size (male SVL of B. luciae   24–31 mm, mostly below 30 mm, vs. 28–34 mm in the other two species). It is further distinguished by its advertisement call: from B. albipunctatus   , by a longer duration and different structure of notes (trill notes vs. short clicks; note duration 18– 101, average 61 ms, vs. 19–43 ms), and from B. sibilans   by the pulsed structure of its trill notes (vs. tonal unpulsed whistles; see Comparative call data below).

After seven years in preservative, ground colour of upper and lower surfaces of head, dorsum, and limbs creamy yellow, with small dark spots or flecks on flanks, lips, tympanic region, and limbs; small brown flecks on central dorsum and around nostrils. Posterior part of eye purplish. There are no data on colour in life of the holotype.

Variation. Morphometric variation is given in Appendix 7. Females are larger, at average having approximately 154 % of male SVL. Overall, the paratypes are similar to the holotype. In life, dorsal surfaces of head, body and limbs translucent green with scattered small, cream dots; there are few scattered brown dots on head and dorsum, often especially concentrated in a group at each side of mid-dorsum. Upper surface of fingers, toes and terminal discs the same colour as dorsum. Lower flanks transparent. Ventral skin transparent, ventral peritoneum white. Ventral skin of limbs translucent with a bluish tone. Iris golden (orange near the border), with purple markings, more densely arranged around the pupil; eye periphery black posteriorly, then blue, and again black ( Fig. 26 View FIGURE 26 ). In calling males we observed a highly extensible single subgular vocal sac.

Natural history. Similar to Boophis albipunctatus   and B. sibilans   , calling males of B. luciae   are often heard at night from high perches up to 4 m in the vegetation along streams in primary and degraded rainforest. In most cases, it is very difficult to observe the calling males, although along some streams this species occurs in rather high densities and non-calling specimens and pairs in axillary amplexus can be observed later at night on lower perches. Especially in the early evening, single individuals may emit only one of the two possible call types (see below).

Molecular relationships. The phylogenetic tree of species assigned to the Boophis albipunctatus   group ( Fig. 21 View FIGURE 21 ) provides evidence for two subclades that correspond well with morphological characters. The first subclade (supported by a bootstrap value of 70% but not by the Bayesian analysis) comprises B. ankaratra   , B. schuboeae   , and allied species (two of which are described as new herein, B. miadana   and B. haingana   ); all these species are green with an irregular pattern of light mottling or with few to many (usually) ill-defined light dots on a green ground colour. The second subclade (BS 96%, BPP significant) contains three species characterized by a pattern of many very small but well-defined white dots on a green ground colour. Of these three species, B. sibilans   and B. albipunctatus   are grouped together (BP 78%, BPP not significant), whereas B. luciae   is most basal. Genetic divergences of B. luciae   are 4.8–6.2 to B. sibilans   and 6.4–7.6% to B. albipunctatus   . Boophis sibilans   and B. albipunctatus   differ by 3.5–3.8%. The two specimens of B. albipunctatus   differ by 1.4% whereas the specimens of B. luciae   from the Andasibe region (Ranomena and Vohidrazana) differ by 1.9–2.4% from those of the Ranomafana region.

Comparative material. So far, B. albipunctatus   is known from few localities only ( Andohahela, Manantantely, and Nahampoana   in the South East; and Andasibe in the Northern Central East, where it occurs sympatrically with B. sibilans   and B. luciae   ). We here provide measurements of one further specimen from Ambohitsara (ZSM 2290/2007) in the Southern Central East which is the first record of the species from this region. It was collected from a chorus of various individuals emitting the typical calls as described by Glaw & Thiesmeier (1993). Furthermore, one DNA sequence (see Fig. 21 View FIGURE 21 ) of a specimen collected in Manombo Special Reserve, a coastal locality in South Eastern Madagascar, provides evidence for the occurrence of the species at this locality.

Distribution. Boophis luciae   is known from Ambatolahy and other sites in and near Ranomafana National Park, from Andohahela National Park at lower elevations based on call recordings, and from An'Ala, Andasibe, Vohidrazana and Ranomena (near Andasibe) (Appendix 10).

Available names. Several names in the Boophis luteus   group are potentially available as earlier names for the following four new species described in this paper: Boophis sandrae   , B. miadana   , B. haingana   , and B. luciae   . All species of the Boophis luteus   group quickly loose the greenish colouration after preservation and fade to yellowish-white. For this reason and due to their morphological similarities it is notoriously difficult to identify preserved voucher specimens for which additional data are unknown. A lectotype (BMNH 1947.2.9.7) of Rhacophorus luteus var. longicrus Parker, 1925   was designated by Glaw & Vences (1992): Adult male (with nuptial pads recognizable on the first finger), SVL 33.2 mm, eye diameter 4.4 mm, eye-nostril distance 2.4 mm, nostril-snout tip distance 3.1 mm, tympanum diameter 1.6 mm, flanks with remains of white marbling, iris periphery with remains of blue colour. This taxon is considered as a junior synonym of Boophis luteus   since long. Its small SVL (adult male 33.2 mm vs. 31.9–37.0 mm in B. luteus   ) and relatively small eyes (eye-diameter / SVL = 0.13 vs. 0.11–0.12 in B. luteus   ) argue for this synonymy and against an attribution to Boophis sandrae   (male SVL 35.5–48.2 mm, eye-diameter / SVL = 0.11–0.15) or B. elenae   (SVL 40.4–46.0 mm, eye-diameter / SVL = 0.11–0.12). Rhacophorus anceps Mocquard, 1902   (type locality Fort Dauphin) and Rhacophorus isabellinus Boettger, 1913   (type locality Moramanga) are based on single, poorly preserved and probably juvenile specimens. The former taxon was repeatedly considered as a dubious name ( Guibé 1978, Blommers-Schlösser & Blanc 1991, Andreone 1993). An unambiguous attribution of both these taxa to any species of the B. luteus   group appears impossible. We continue considering them as junior synonyms of Boophis luteus   . 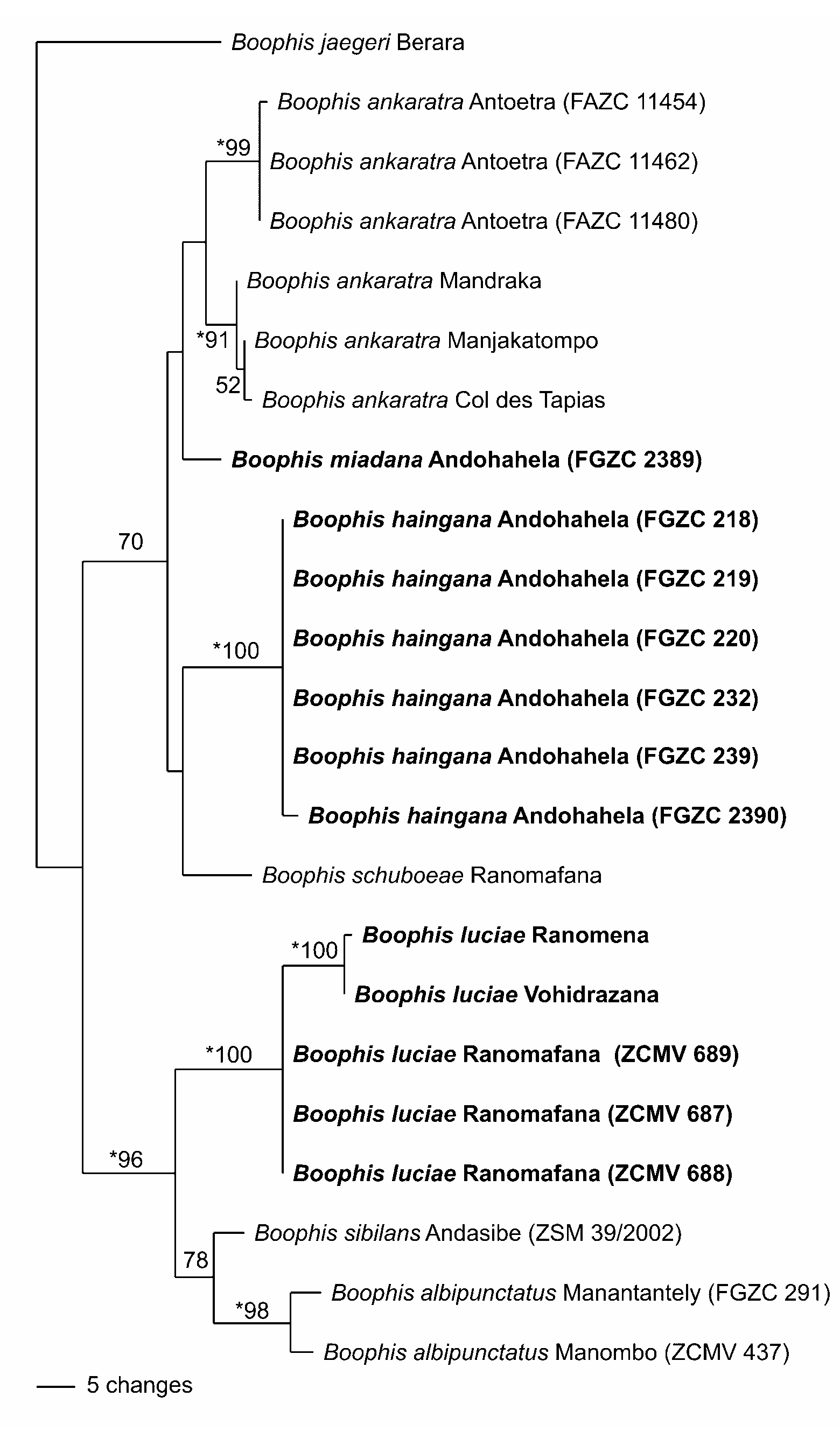 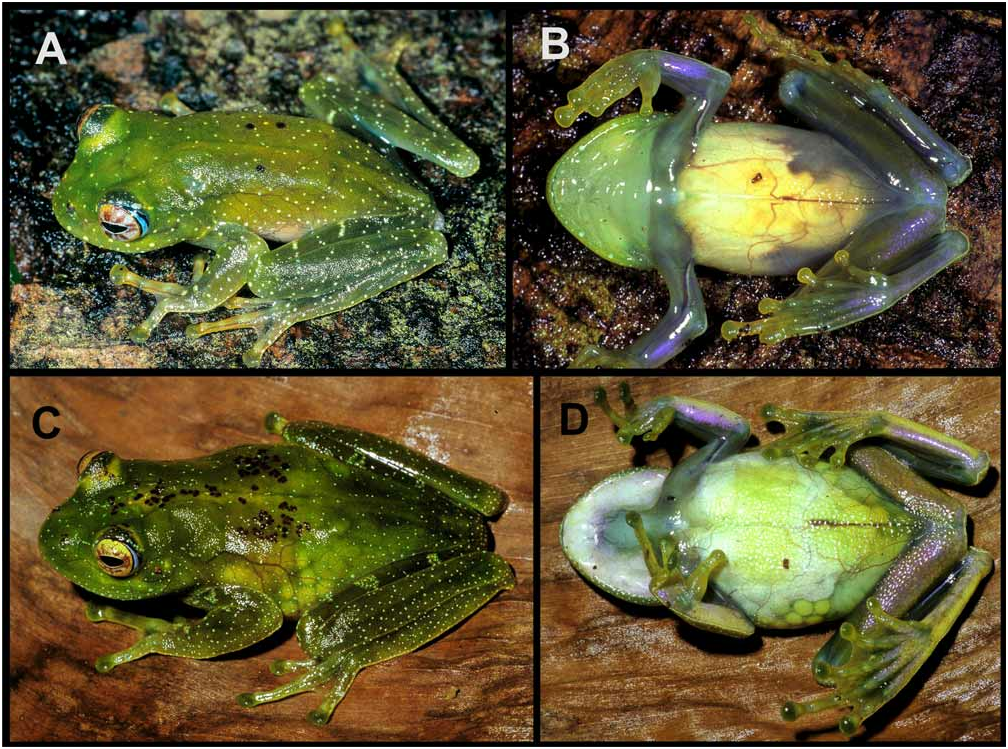 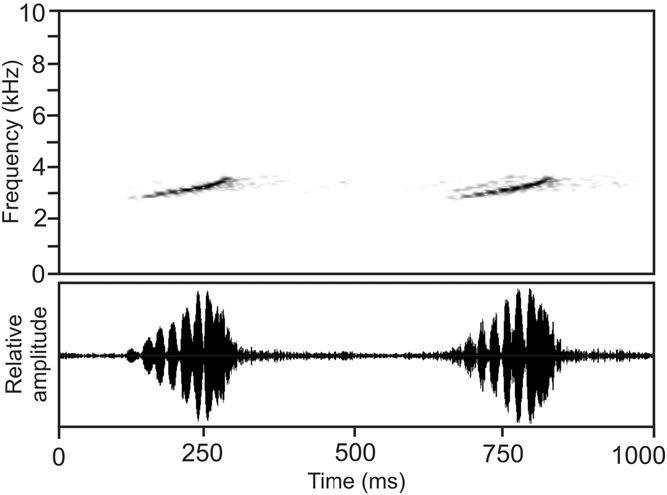