Remark. Not surprisingly, due to their external similarity, largely similar call structure, and sympatric occurrence, Boophis elenae   and B. sandrae   have long been confused. In the original description of B. elenae, Andreone (1993)   shows photographs of the holotype specimen (MRSN A69) in life, leaving no doubt about its identity due to the clearly visible reddish horizontal stripes in the iris which are absent in B. sandrae   . Andreone (1993) mentions this iris character and attributes a further specimen (female paratype MRSN A71.2 from Ambatolahy) without iris stripes to B. elenae   as well. Considering the new classification proposed herein, this specimen belongs instead to B. sandrae   . Specimens of B. sandrae   have been reported as " B. sp. aff. elenae   " by Vences et al. (2006) and by Glaw & Vences (2007:168–169), and as Boophis sp.   22 in Vieites et al. (2009). See also section on Available names in the description of Boophis luciae   below.

Etymology. This species is dedicated to Sandra Nieto Román, in recognition for her patience, interest and help during the field work and nights spent in the laboratory, by her husband, David R. Vieites.

Diagnosis. Assigned to the genus Boophis   based on the presence of an intercalary element between ultimate and penultimate phalanges of fingers and toes (verified by external examination), presence of nuptial pads and axillary amplexus and absence of femoral glands in males, absence of gular glands in males, enlarged terminal discs of fingers and toes, lateral metatarsalia separated by webbing, absence of outer metatarsal tubercle, molecular phylogenetic relationships (see Vieites et al. 2009 for a complete molecular analysis of Boophis   ), and overall similarity to other Boophis species.   Assigned to the Boophis luteus   group based on the following combination of characters: moderate size (male SVL 36–48 mm); absence of tubercles or flaps on heel and elbow; presence of webbing between fingers; indistinct canthus rostralis; presence of distinct white tarsal folds; dorsal colouration translucent green in life and yellow-whitish in preservative; absence of red ventral colour; ventral skin in life non-transparent; bilobed subgular vocal sac; presence of vomerine teeth; and molecular phylogenetic relationships. Boophis sandrae   differs from all other species in the Boophis luteus   group by strong genetic differentiation (see below) and by advertisement calls: in brief, the general call structure consisting of a long rapid series of short and unharmonious notes observed in B. sandrae   is known from only in three other species in the group ( B. andreonei   , B. anjanaharibeensis   , B. elenae   ), whereas other species have series of melodious whistling notes ( B. englaenderi   , B. luteus   , B. septentrionalis   , B. tampoka   ) or slow series of pulsed notes ( B. andohahela   , B. jaegeri   ); in calls of B. elenae   , note repetition rate is lower and notes longer, and in B. anjanaharibeensis   , call repetition rate is higher and notes shorter (see Comparative call data below); no obvious call differences exist to B. andreonei   which however is a smaller species (SVL 31–33 mm vs. 36–48 mm in B. sandrae   ) without an obvious dorsal pattern of darker green spotting (vs. presence). Boophis sandrae   differs from B. luteus   , B. anjanaharibeensis   , and the morphologically most similar species, B. elenae   , by its iris colouration (without red vs. with thin red horizontal stripes or a broad ring of red colour). It further differs from B. andohahela   , B. septentrionalis   and B. tampoka   by the absence of light yellowish dorsolateral lines (versus presence).

Variation. Morphological variation is given in Appendix 6. Females are larger, with an average of 144 % of male SVL. The paratypes are similar to the holotype. The dorsal colouration of the female paratype ZSM 236 View Materials /2006 is more yellowish, especially on the flanks, and with three distinct yellow spots between the eyes. The forelimbs and hindlimbs are more brownish, with distinct light bands. The ventral surfaces of limbs are translucent bluish green, and the chest and belly translucent pinky white. Bones bluish green. Iris pale pink. In calling males we observed a bilobed subgular vocal sac   .

Natural history. This species is common in the Ranomafana region. Its typical calls can be heard in dense rainforest but also very commonly in degraded or secondary forest and, in largely cleared areas, from large trees along streams and rivers. Calling specimens usually are perched quite high, often 2–4 m above the ground, and usually sit on thin branches rather than on leaves. In the later evening, pairs in axillary amplexus can be observed at lower heights in the vegetation along the streams. The species is often found in close syntopy with B. luteus   but has not been recorded in the same stretch of stream with the externally similar B. elenae   .

Comparative call data. The sister species of B. sandrae   , B. anjanaharibeensis   , also emits long series of very short notes in rapid succession. In 2005, we were able to observe several specimens of this species emitting the call at Marojejy National Park, and our assignment of these call data to the species is thus reliable. In contrast, the calls tentatively assigned to the species by Andreone (1996) probably do not belong to this species (specimens were not observed calling by the author). These calls have a note repetition rate of 5.1 notes/ second only, in contrast to approximately 40 notes/second observed by us in 2005. Compared to B. sandrae   , note duration in B. anjanaharibeensis   is much shorter (2–5 vs. 13–34 ms) and note repetition rate is much faster (40 vs. 22 notes/second), whereas maximum call energy is distributed roughly in the same frequency band (2950–3150 Hz) and inter-note intervals (18–27 ms) are also similar to B. sandrae   (recording of B. anjanaharibeensis   obtained at Marojejy National Park; Vences et al. 2006, CD 1, track 18). Also, calls of B. elenae   consist of a long series of short pulsed notes, repeated in fast succession ( Fig. 20B View FIGURE 20 ). However, note duration is longer and repetition rate significantly lower when compared to calls of B. sandrae   . For detailed comparison, we here provide numerical parameters of the call of B. elenae   recorded at Maharira forest (air temperature 18.4°C): duration of call series, 8877 ms; note duration, 78–110 ms (94 ± 9; n = 24); inter-note interval, 50–86 ms (66 ± 8; n = 24); note repetition rate, 6.1–6.4 notes/second; dominant frequency range 1900–2900 Hz, maximum call energy at 2510–2705 Hz ( Vences et al. 2006, CD 1, track 19).

Molecular relationships. The phylogenetic tree of species in the Boophis luteus   group ( Fig. 18 View FIGURE 18 ) shows a poor basal resolution, but some relationships among species are well resolved. As already indicated by a similar analysis (with fewer sequences of similar length; Köhler et al. 2007), Boophis tampoka   is resolved sister to B. luteus   (BS 97%, BPP significant), and B. englaenderi   seems to be related to these (albeit without bootstrap or Bayesian support). Boophis elenae   is grouped with B. andreonei   and B. jaegeri   (not supported by bootstrap or Bayesian support values), while the sympatric B. sandrae   groups with B. anjanaharibeensis   (BP 97%, BPP significant), and the sandrae   / anjanaharibeensis   lineage appears to be related to B. septentrionalis   (no bootstrap or Bayesian support). Boophis sandrae   (only topotypical specimens from the Ranomafana region considered) shows high genetic divergences to B. anjanaharibeensis   (5.2–6.1%) and to all other representatives of the group (>7%). Interestingly, putative specimens of B. sandrae   from Andasibe are genetically also quite divergent (2.8–5.0%) to topotypical specimens, and also comprise two sympatric lineages differentiated by 2.3% among each other. Because these sequences are based on tadpole specimens only ( Raharivololoniaina et al. 2006) the identity of this population cannot be further investigated here, but most probably they represent at least one further undescribed species.

Distribution. The distribution of B. sandrae   encompasses various sites, all in the region around Ranomafana National Park, including Ambatolahy, Vohiparara, and Ranomafana village (Appendix 10). Similar specimens have been photographed and collected in the region around Andasibe, but based on tadpole sequences in Fig. 18 View FIGURE 18 these specimens are strongly differentiated and may belong to another species. 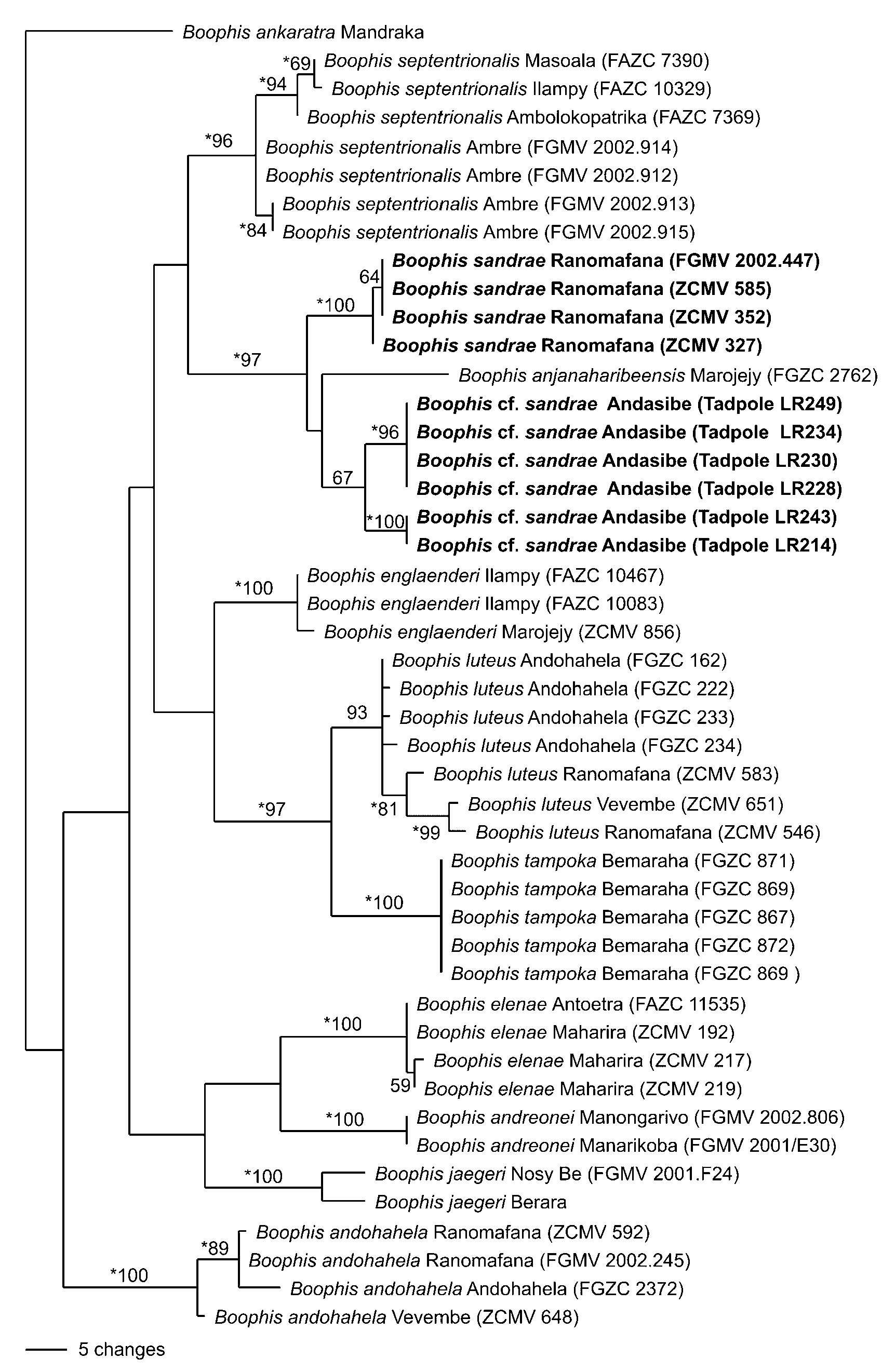 FIGURE 18. Maximum parsimony 16S rRNA phylogram for species in the Boophis luteus group. From 470 total characters, 347 were constant and 111 parsimony informative. MP searches retained 60 trees of which a strict consensus is shown. Consensus support values higher than 50, from 2000 bootstrap replicates, are shown; an asterisk indicates Bayesian posterior probabilities equal or higher than 95%. The species newly described herein is in bold.