The spines on pinnules and subpinnules follow the general gradual change seen within this genus, from conical and horn-shaped to acicular, sharp and needle-like ( Fig. 29View FIGURE 29, g–n). They are finely papillose over two thirds of their height, with the papillae elongated towards the tip of the spines ( Fig. 29View FIGURE 29, m, n). On the subpinnules these papillae tend to appear as faint striations and the spines almost appear smooth ( Fig. 29View FIGURE 29, k, l). The spines are inclined upwards, which is more pronounced on abpolypar side, although on thicker branches this inclination is irregular ( Fig. 29View FIGURE 29, g–j). On a subpinnule 0.13 mm in diameter, the spines are arranged in five longitudinal rows. The polypar spines measure 0.08–0.10 mm in height and are spaced 0.12–0.20 mm apart, while the abpolypar spines measure 0.07–0.09 mm and are spaced 0.11–0.18 mm apart. On a primary pinnule of 0.28 mm, six longitudinal rows of spines can be seen. The polypar and abpolypar spines measure 0.10–0.14 mm and 0.09–0.13 mm, respectively, and they are spaced 0.10–0.19 mm and 0.10–0.18 mm, respectively. On a thick branch of 1.3 mm in diameter, the longitudinal arrangement is lost, and the spines measure up to 0.26 mm. Bifid spines can also be found on such branches.

Taxonomic remarks. The present species differs from Cupressopathes abies  in having a smaller, more flattened corallum with several of the primary pinnules developing into side branches ( Brook 1889, Opresko 2001, Fig. 30 aView FIGURE 30). The typical bottle-brushed shape of Cu.abies  is not found in this species ( Fig.30View FIGURE 30,a),as there is a tendency for its primary pinnules to have more irregular lengths along the corallum than those of Cu. abies  . In general, compared to Cu. abies  , Cu. pumila  has more branches and a longer, less dense pinnulation, with a greater tendency for the subpinnules to be bilateral. Spines are similar to those of myriopathids ( Fig. 30View FIGURE 30, b). 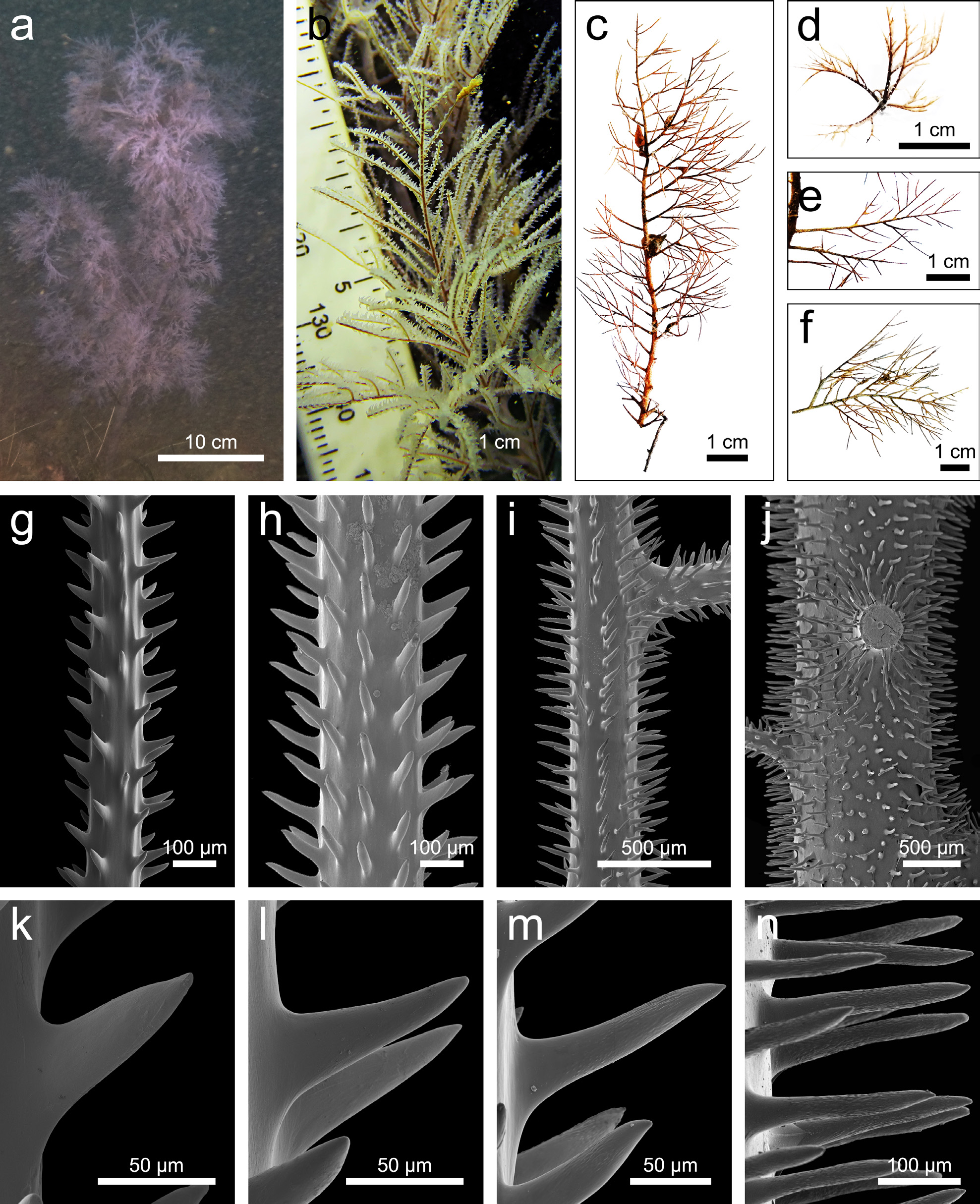