Description. A branched, planar and flabellate colony measuring 40 cm in width and 25 cm in height, white in color ( Fig. 5View FIGURE 5, a–c). The basal diameter of the axis is 6 mm and rapidly divides in three branches in the same plane. Some branches grow out of the fan before developing parallel to the plane, giving the appearance of overlaid flabellate parts ( Fig. 5View FIGURE 5, b). The general plane of the colony has anterior and posterior sides, however, the parts growing parallel to the plane can have their anterior side facing the anterior side of the colony. The branchlets are distinctly inserted antero-laterally to the branches, and numerous fusions occur between adjacent ones ( Fig. 5View FIGURE 5, d). The branchlets are not strictly bilateral and alternate as sometimes several branchlets occur on the same side, and rarely opposite or subopposite. At some places they appear nearly as pinnules ( Fig. 5View FIGURE 5, d). Branchlets measure up to 8.5 mm but mostly less than 5 mm in length. Branchlets on the same side of a branch are spaced 1–7 mm, with 7–14 branchlets occurring per cm counting those on both sides (mostly 9–12 per cm). They are inserted on the branches with angles varying between 30–75°, with an average of 55 ± 10°. The polyps measure 0.5–0.6 mm in transverse diameter and are spaced 0.2–0.4 mm apart, their tentacles are thick and rounded ( Fig. 5View FIGURE 5, c). They are found in a single row on branchlets but can be irregularly distributed on thicker branches. There are usually 9–12 polyps per cm.

Originally, this species ( Fig. 6View FIGURE 6) was doubtfully assigned to the genus Tylopathes  by Brook (1889). In a later study, T.? hypnoides  and three other species provisionally assigned to Tylopathes  by Brook (1889), T.? flabellum  , T.? dubia  and T.? elegans  , were excluded from the genus ( Opresko 2006). These species most likely should be referred to the genus Antipathes  based on the morphology of the spines, although their true affiliation is yet to be determined (Opresko 2015). These species, along with Antipathes craticulata Opresko, 2015  , have in common a flabellate corallum with short, straight or slightly curved terminal branches (Opresko 2015). Anitpathes craticulata  mainly differs from the Malagasy specimen by both the morphology of the spines, which are smooth, conical with an acute tip and up to 0.30 mm, and by the number of branchlets per cm (3–5 per cm). The number of branchlets per cm of the Malagasy specimen (7–14, mostly 9–12) is closer to An. hypnoides  (12–14) than An. dubia  (4–6) and An. elegans  (8–10).

In his description of Tylopathes  ? hypnoides, Brook (1889)  reports a fan-like corallum of 23 cm high and 28 cm wide ( Fig. 6View FIGURE 6, a), with branches irregular and spreading, and with frequent fusions ( Fig. 6View FIGURE 6, b). The Malagasy colony is very similar in size and appearance. Brook also reports primary pinnules (i.e. branchlets) arranged subalternately and varying in length, many measuring 6 mm (in the present specimen many terminal branchlets are around 5 mm) and some being larger (1.3–2 cm, those bearing branchlets as well). The spines in the type specimen are reported to be subconical and compressed, with the apex often slightly bent upwards. These features can be observed in the present specimen, however, Brook (1889) did not indicate which branch he was analyzing to describe the spines, nor did he report any difference between polypar and abpolypar spines. The size of the spines is reported only as being about three-quarters the diameter of a pinnule, which would be around 0.09 mm for a branchlet measuring 0.13 mm in diameter, which is consistent with the size measured for abpolypar spines in the present specimen. A recent examination of the type ( Fig. 6View FIGURE 6) revealed that the spines are simple, smooth, narrow, with a fairly wide base, and up to 0.15 mm tall (pers. obs. DMO), which falls within the description of the Malagasy specimen. Finally, five longitudinal rows may be counted from one aspect of a branchlet in Brook’s specimen, which is also the number of rows reported here for branchlets measuring 0.13–0.23 mm in diameter. Considering these similarities, the close locality of Brook’s specimen to Madagascar ( Mauritius) and the detailed picture of the type material ( Fig. 6View FIGURE 6), the present specimen is identified as An. hypnoides  . 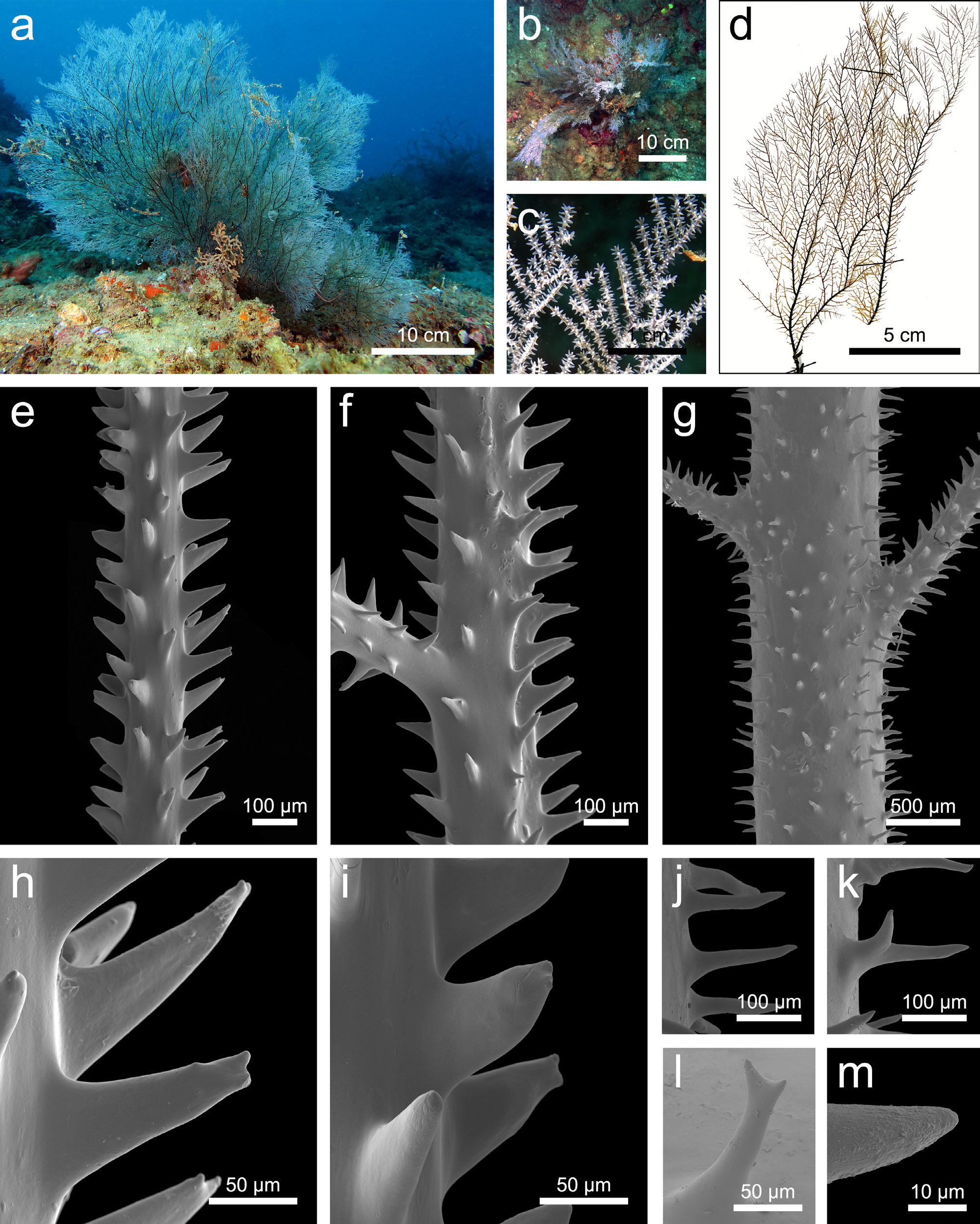 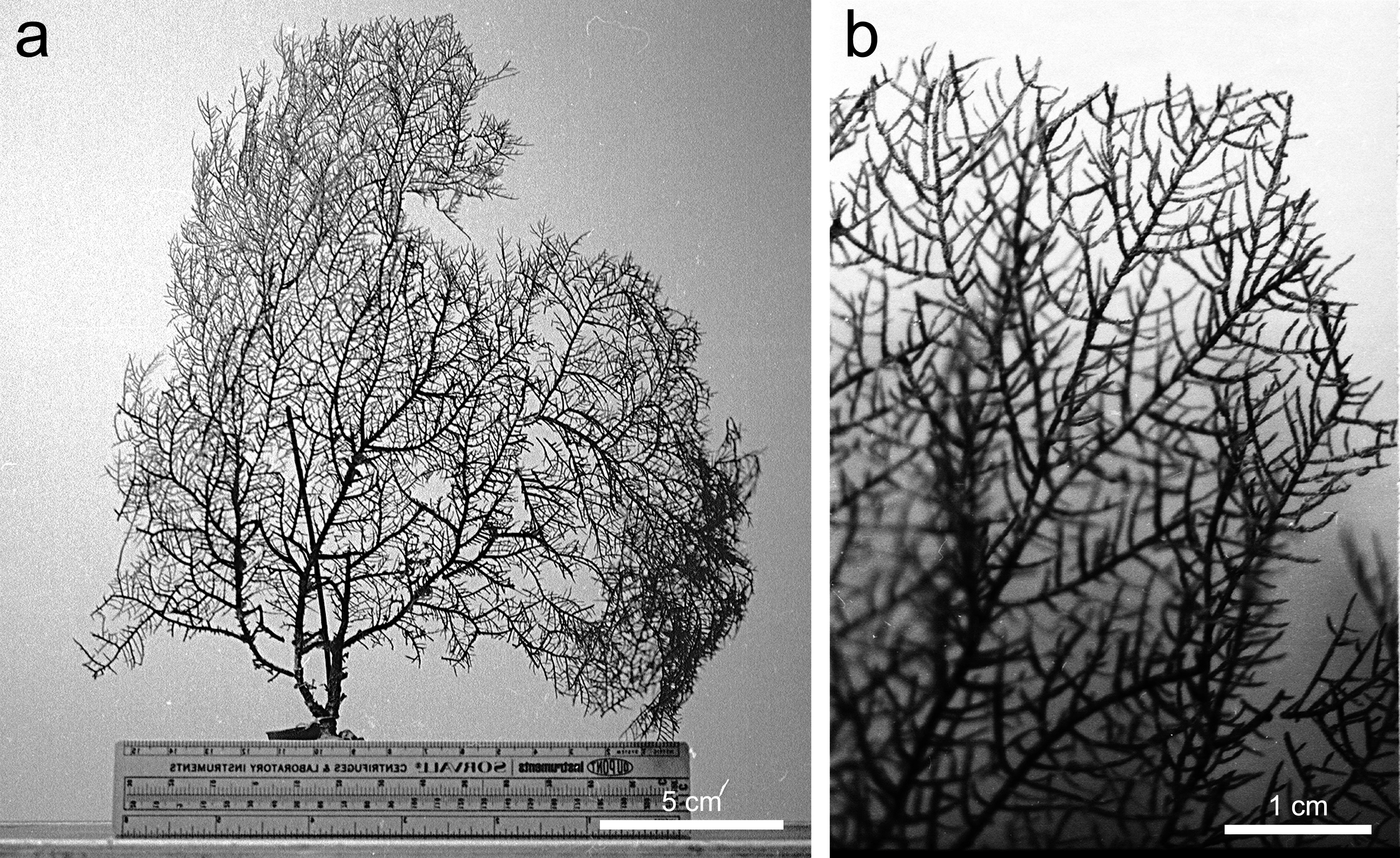