Taxonomic remarks. This species was originally described by Silberfeld (1909) who stated that the colony was sinuous, with polyps in multiple rows measuring about 1 mm in diameter and 2 mm in height, rounded spines measuring 0.35 mm in height and inserted at a right angle to the corallum, and having smaller spines with acute tips. He reported seven longitudinal rows of spines seen from one aspect. Since this description, no record of this species has been published. Contorted colonies are typical of Ci. contorta van Pesch, 1910  . However, in his description van Pesch (1910) states that the colonies are so contorted that a colony measuring 1.5 m in length would fit into a “bottle of 20 cm ”. As seen in Ci. densiflora  , the polyps are also gathered on one side of the axis, 10 to 12 of them found per cm. The spines are triangular, blunt or acute, and measure 0.11–0.15 mm, their mutual distance is around 0.52 mm. They are papillose, but no mention is made about the presence of any knobs at the apex. A reexamination of both type specimens of Ci. densiflora Silberfeld, 1909  (USNM 100475, Fig. 16View FIGURE 16, a, c) and Ci. contorta van Pesch, 1910  (USNM 100414, Fig. 15View FIGURE 15, b, d) confirmed that spines were very similar, but knobs are only found in Ci. densiflora  ( Fig. 16View FIGURE 16).

In the present case, the Malagasy colony is also generally thicker than typical Ci. contorta  , and with a more limited contortion of the corallum. In Madagascar, these knobs at the tip of the spines represent one of the main features to differentiate Ci. densiflora  from Ci. anguina  as the colonies can be very similar when observed in the field. Regionalization of spine size and ornamentation are common in contorted or spiral species. Contrary to straighter specimens of Cirrhipathes  , the apical portion might slightly differ from a central or basal one, as well as between straight or looped segments. Cirrhipathes contorta  has two categories of the size of spines: in loops and curves, polypar and abpolypar spines are markedly different, which is also the case in the contorted specimen (INV.131374) analyzed here. Examination of entire contorted colonies of non-type material in Indonesia revealed a gradient of spines, from simple to few apical knobs (pers. obs. MB). However, as seen previously, the type does not show distinct knobs –but this has not been analyzed for specimens from all regions. Environmental constraints may contort colonies of Ci. densiflora  . Monitoring of transplanted colonies in Indonesia suggested that this possibility is not to be excluded ( Bo et al. 2009). Pending a revision of the Cirrhipathes  group and the clarification of intra- and interspecific variability of contorted colonies in the same environments, importance should be given to spines and type material for identifications among genera and species. Therefore, the name Ci. densiflora  is applied to the different phenotypes observed in Madagascar. 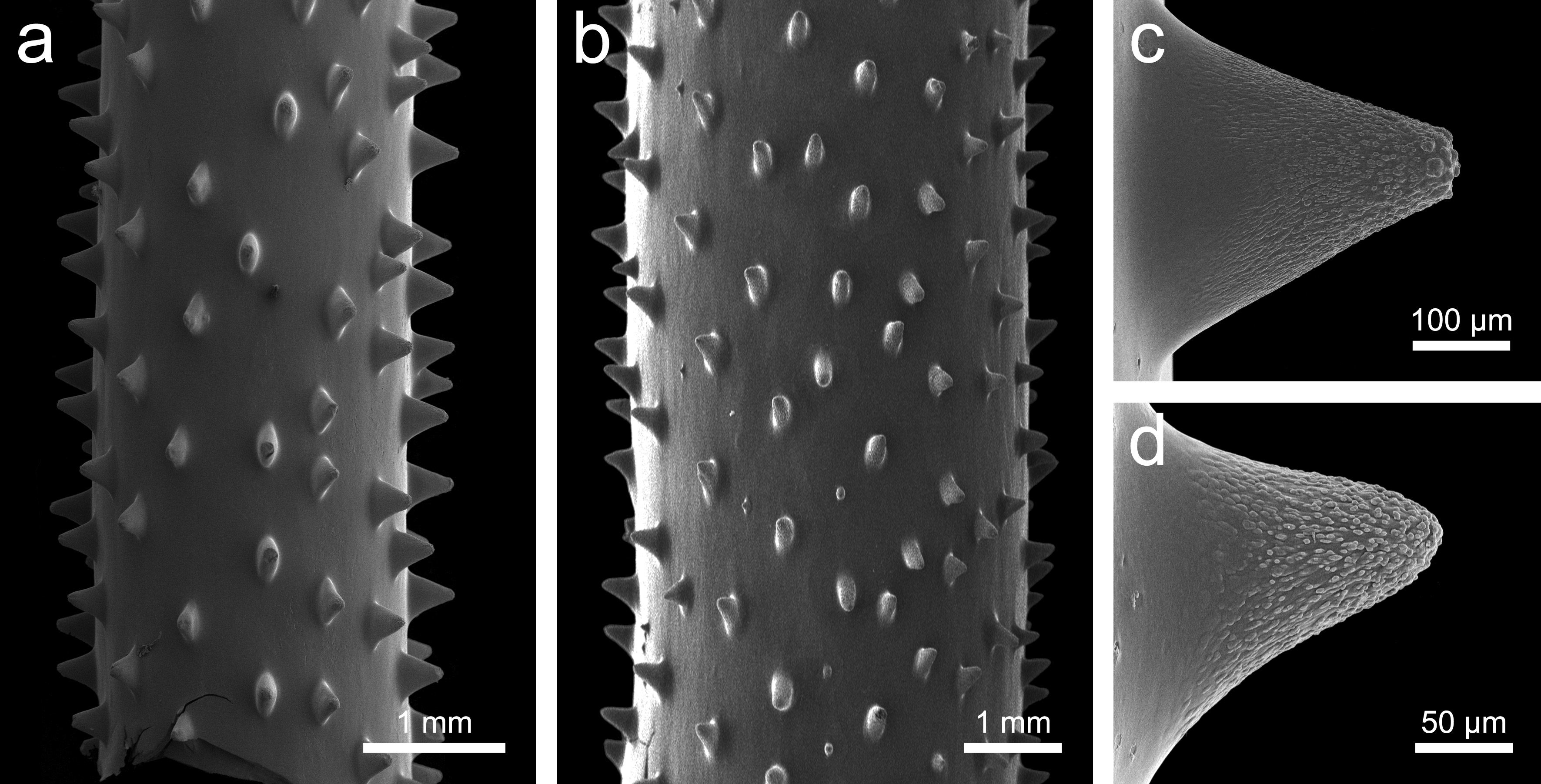