The colour of the Philippines specimens in this collection (Fig. 115B) departs from the species’ more common appearance, which is to have a large yellow patch on each side of the siphons, as figured by Kott (1990: pl. 1e, f) and Monniot F. & Monniot C. (1996: pl. 6b), and is also unlike that of the Mozambican specimens. In the Philippines the tunic is transparent, and the rim of the siphons, the prepharyngeal band, the endostyle, and the transverse vessels have a black pigment. In one of the colonies, zooids have two white patches, denser at the periphery than in the centre, disposed anterolaterally as in other geographic regions. In other specimens no patch at all could be seen.

The peculiar structure of the colonies, with the zooids’ thoraces partially isolated and their parallel abdomens included in a cylinder of common tunic, is present here. The thoracic musculature ( Fig. 22A) is mostly transverse; it is as figured rather schematically by Tokioka (1967) but not at all as figured by Kott (1990). We have not observed ventral longitudinal muscles. The disposition of the muscles on the abdomen and their anchoring ( Fig. 22A) was not made clear by previous authors. The muscular attachments are clearly visible in the Philippine specimens; they are less developed in colonies from Palau and Mozambique. The presence of a well-defined post-stomach ( Fig. 22B) is characteristic of the species.

There are no anatomical characters allowing one to distinguish these specimens from those described with yellow patches.

The specimens were well-relaxed, and one can ascertain the disposition of the thoracic muscles of this species and the absence of ventral muscles ( Fig. 23A, B View FIG ). The lengthening of the oesophageal peduncle in zooids depends on their age. A growing stolon produces several zooids ( Figs 23C View FIG ; 115C).

In the species distribution, Kott (1990) mentions the Red Sea, referring to Kott (1957b). Those samples collected in southern Arabia, are described as having only four rows of stigmata instead of six in Pacific specimens; so this identification seems doubtful.

The colony is made up of zooids that are almost completely isolated (Fig. 115D) from each other but whose most posterior parts are included in a mass of short stolons containing many vascular ampullae. This mass encrusts the substrate. The tunic is devoid of epibionts, even on the abdomens, and only some small didemnids grow on the mass of basal stolons. The specimens are slightly transparent. The colour in life is pale blue (Fig. 115D), staining the zooids’ body wall and their transverse vessels. There is a white spot on the neural ganglion and at the top of the endostyle. The transparent rim of the siphons lacks the usual yellow line in this species.

The musculature comprises fibres that converge toward the abdomen but do not anastomose ( Fig. 24A View FIG ). They group into two bundles ending in well-defined anchoring masses on each side of the base of the abdomen ( Fig. 24A, B View FIG ). The largest specimens have 28 rows of stigmata. A few zooids are incubating larvae; these zooids always are retracted, with a very short oesophageal peduncle. Egg development begins in the oviduct below the cloacal cavity ( Fig. 24B View FIG ). The larvae are not pigmented; they have three adhesive papillae in a triangle ( Fig. 24C View FIG ).

By its colour, the colonies look like those of C. moluccensis ( Sluiter, 1904)   collected in the same region, but they do not have dark spots. The musculature is different from the transverse one of C. moluccensis   but very similar to that in other descriptions of C. fecunda   . It is only the absence of the yellow ring around the siphons that leaves any doubt about the synonymy with C. fecunda   .

C. caerulea Oka, 1934   , from Japan, appears similar to our samples, but it has a peculiar disposition of the thoracic muscles. Kott (1990) compares C. elegans (Oka, 1927)   and C. fecunda   and states that the distinction between the species is the absence of the yellow ring around the siphons in C. elegans   , a cobalt blue species in life. In addition, the musculature of C. elegans   differs slightly from that of C. fecunda   : “Thoracic muscles are up to ten, main ones converging to the branchial siphon are longitudinal rather than oblique” ( Nishikawa & Tokioka 1976: 73). 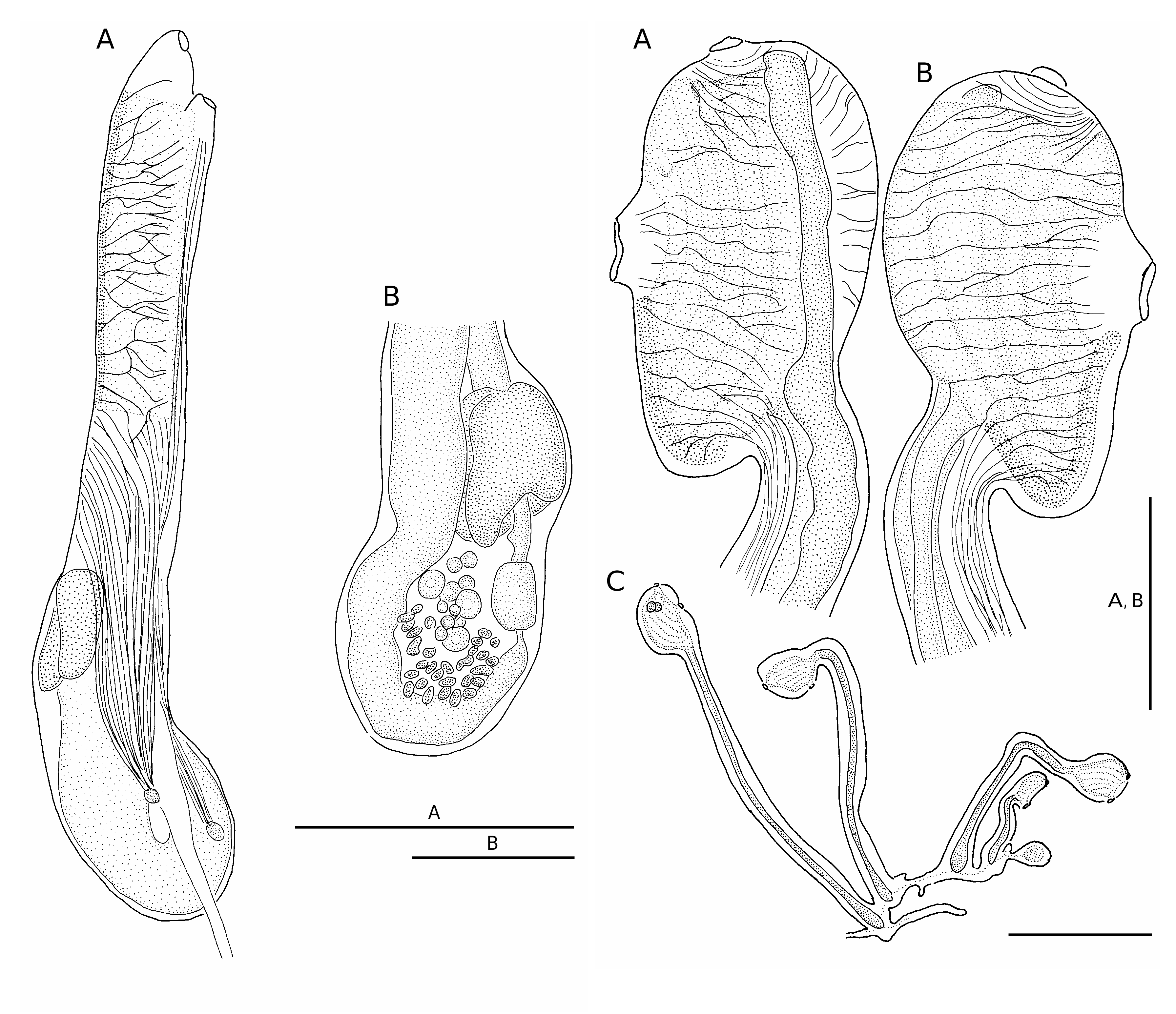 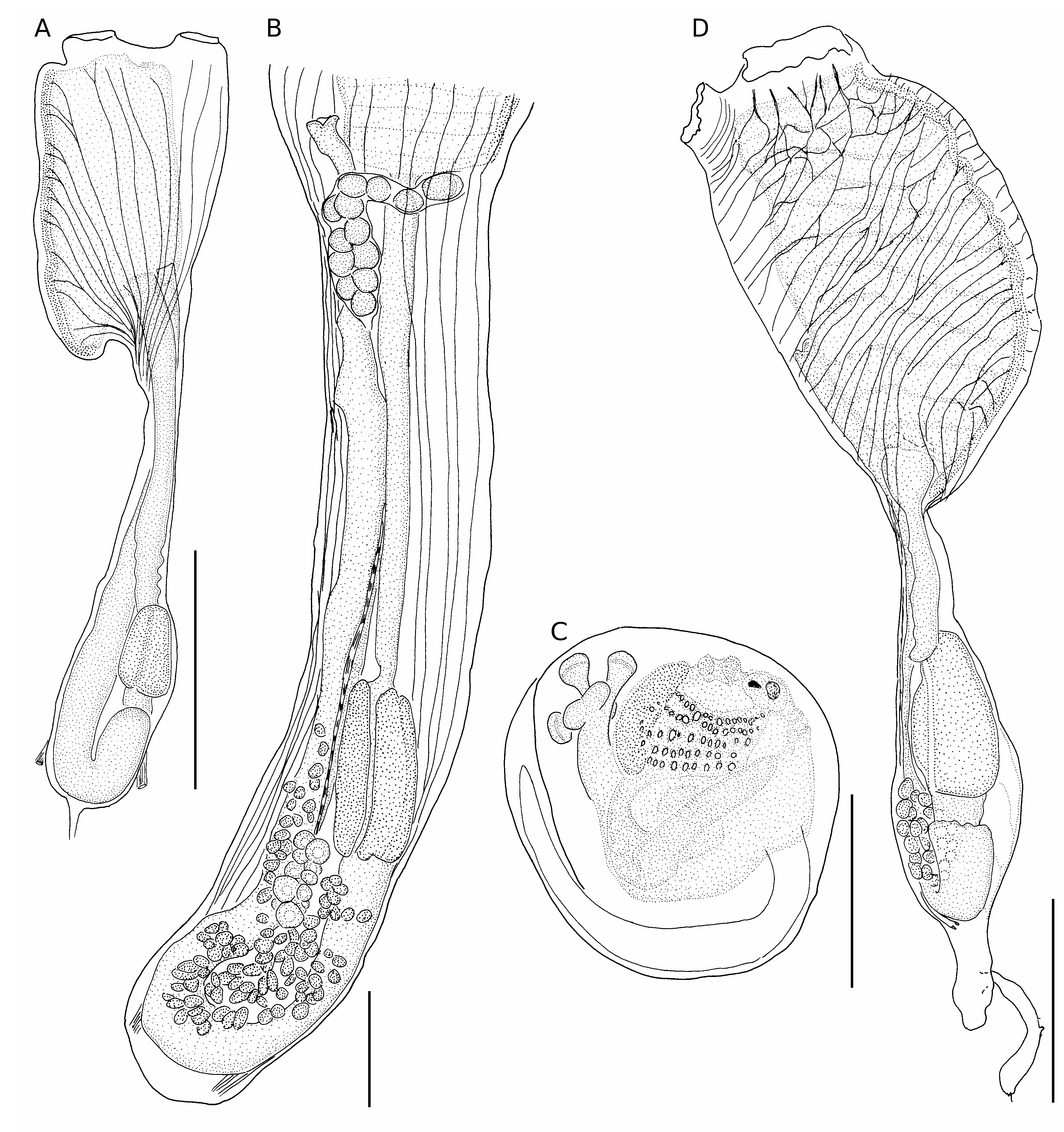