Diagnosis (only known from workers). Comparatively medium to large (TL 6.55–7.59 mm); color light brown to dark brown; densely sculptured, rugose to areolar-rugose, procoxae and gaster foveate; petiole tubuliform, without projected node; mandibles triangular, long and pedunculate with twelve teeth on each masticatory margin; clypeomandibular space ample; labrum cuneiform, bilobed apically, lobes separated by a narrow cleft; pilosity consisting of a basal layer of flat and spatulate to subplumose decumbent curved hairs for most of their length, and another layer of long erect and clavate hairs.

Size comparatively large compared to other Basiceros species. Light brown to dark brown, with lighter appendages, yellowish-brown to brown, respectively. Body predominantly covered by two types of hair. White to light brown semi-erect to erect hairs, long and filiform and slightly clavate, present on head dorsum near eye height and extending to occipital region, sparsely present on ventral region of head; on the anterolateral corner and dorsum of pronotum; a pair present on the anterodorsal margin of propodeum; on sides and petiolar dorsum; on the dorsum of postpetiole, two pairs on the anterior margin of postpetiolar sternite; on the dorsal and ventral gastral margins, more abundant dorsally. Length of these hairs varying according to position, notably longer on the dorsal surface of entire body. White to yellowish decumbent hairs, flattened, short and curved, apically spatulate or subplumose, present on the head dorsum, pronotum and propodeum, more densely on the latter. One pair of spatulate hairs on the basal portion of lateroventral region of mandibles and another on the base of stipes, relatively close to the hypostomal margin. Setae sparse, from simple and short to apically spatulate, at the base of mandibles. Long and erect spatulate hairs on the anterior margin of antennal scapes, scape dorsa covered by short spatulate hairs, filiform setae on the inner face of the antennal basal lobe, hair on the scape elbow (anterior region of lobe) with the same morphology as the special hairs present on the rest of the body. Clypeal disc with short and appressed setae. Filiform and apically curved hairs present on the pygidium and hypopygium. Short and subdecumbent spatulate hairs on trochanters and tibiae and on posterior region of tarsi, becoming thinner on the distal segments.

Mandibles smooth over most of its length and shiny, with sparse piligerous punctuations, interdental filiform setae present, surpassing length of the teeth; anterior region striated. Clypeus rugo-reticulate in great part of its central disc; lateral regions predominantly areolar-rugose, anterior region of clypeus laminar, smooth and shiny, with its anteromedial portion weakly covered by longitudinal striate impressions. Head dorsum covered by thick and irregular striae, gaps between them forming foveae of variable size. Internal surface of antennal scrobes. Ventral face of head punctuate-reticulate, changing to rugose near posterior margin and roof of antennal scrobes; extending posteriorly to the vertexal margin, covering this region and the sulcus present near the median region. Vertexal region scrobiculate around the occipital carina. Mesosoma strongly sculptured, dorsum covered with vermicular rugae ranging from strongly irregular in the dorsum of the promesonotum to obliquely longitudinal in the dorsal region of the propodeum; lateral region of the pronotum and central portion of mesopleuron punctate-reticulate; mesopleuron with sinuous lamellar epicnemial carina bordered by sparse scrobiculations; lateral region of propodeum with irregular and transversally vermiculate striae, forming foveae of variable size, varying to punctate-reticulate in its central range and becoming rugose again near the bulla of the metapleural gland; posteropropodeum covered by sparse punctuations, varying to longitudinal rugulae as the sloping face advances to the propodeal lobes. Petiole and postpetiole with oblique to irregular longitudinal rugae. Posterior region of the petiole longitudinally rugulose. First gastral segment densely punctuate-reticulate; punctuations intermediate and distinct, with smooth and shiny space between them; punctuations decreasing near the posterior margin, thinner and more reticulate. Other gastral segments with exposed tergites finely reticulate—same to sternites, but with margins and shinier. Procoxae punctuate-reticulate, meso- and metacoxae punctuate to dotted to irregularly rugulose; legs with inconspicuous rugo-reticulations.

Comments. Basiceros browni sp. nov. can be separated from other Basiceros by the combination of a tubuliform petiole, without a projected node; long and pedunculate mandibles with a wide clypeomandibular space; labrum shape (cuneiform, lobes separated by narrow cleft); and general pilosity (long, erect, and clavate hairs).

This new taxon was initially recognized from stacked macrophotographs of a worker specimen on AntWeb, deposited at the NHM in London. The label contained a handwritten note indicating it as a paratype (although this species was yet to be formally described) of the species “ Basiceros browni sp. nov. ”. Thanks to the aid of Dr. Brian Fisher (Cal Academy) in identifying the collector origin, the specimen was linked to Dr. Gary J. Umphrey, professor in the Department of Statistics at the University of Guelph, Ontario, Canada. Dr. Umphrey kindly traveled to the FMNH in Chicago with some Basiceros specimens. Among the workers of this new taxon that Dr. Umphrey made available for examination, one was coated for SEM and missing the left proleg. For those specimens, considerable variation in size could be noted (in mm: HL 1.25–1.41, ML 1.70 –2.00, GL 1.47–1.77, TL 6.55–7.59). Additionally, specimens presented slight variation in the distal margin of labrum, with the cleft in one specimen practically indistinct. The lighter coloration of one of the workers and the absence of particles covering its integument suggest a recently emerged worker, selected to be the holotype .

Distribution. So far, only known from the provinces of Pichincha and Los Ríos in Ecuador from two collection events (1978 and 2009, respectively). The specimens collected at the Río Palenque Research Station have “ Pichincha ” as the province; this reserve is instead located in the Province of Los Ríos.

Natural history. Virtually nothing is known about the biology of this species. The first collection resulted in four workers; three workers retrieved on July 29, 1978 from a rotten log at the edge of a trail in the middle of a forest. According to Dr. Umphrey, the nest was not found. The last 1978 specimen was collected the following day while foraging about three meters from the place occupied by that rotten log, suggesting it might have been part of the same colony. The paratype collected in Otongachi came from a Winkler sample. 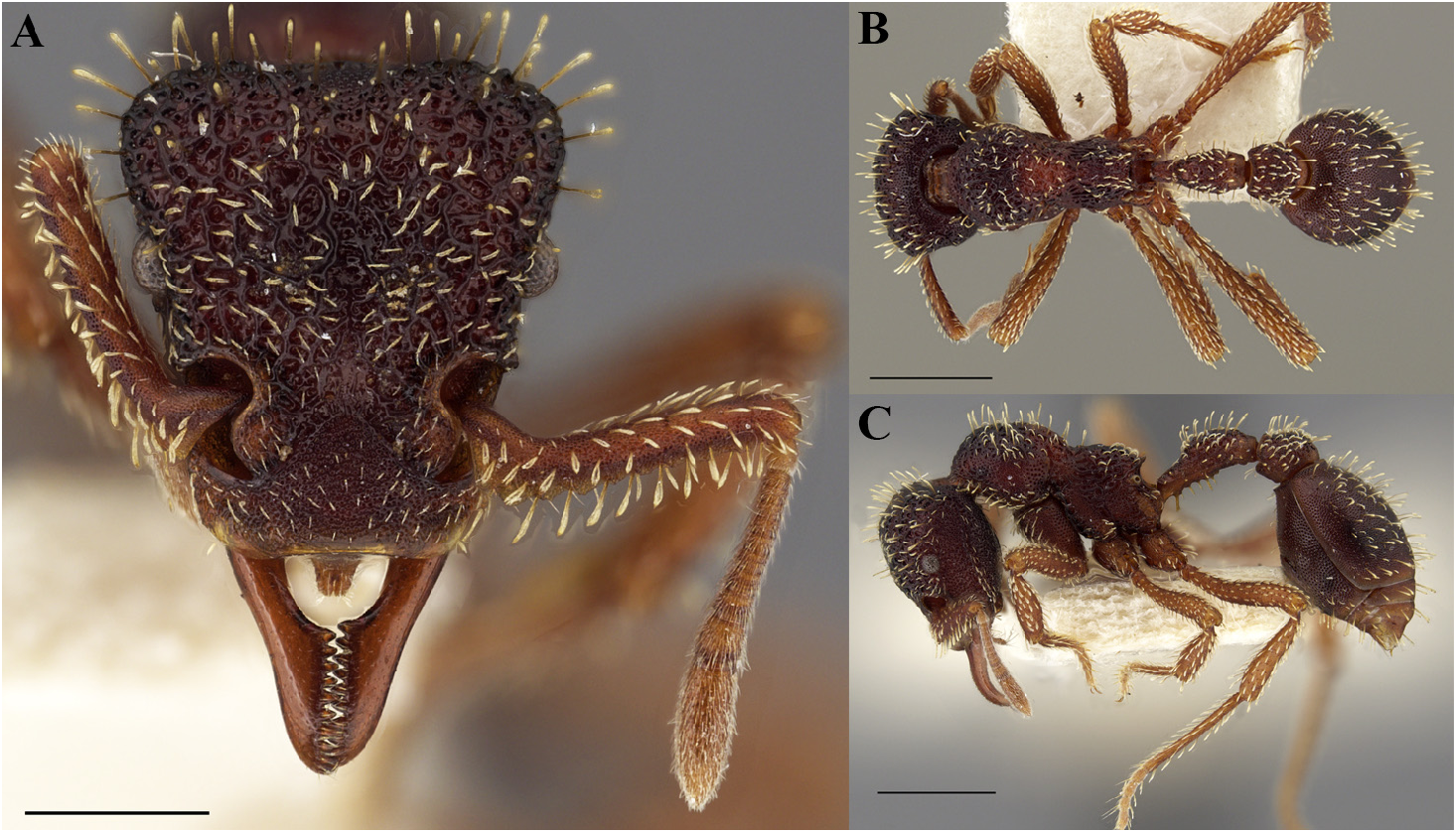 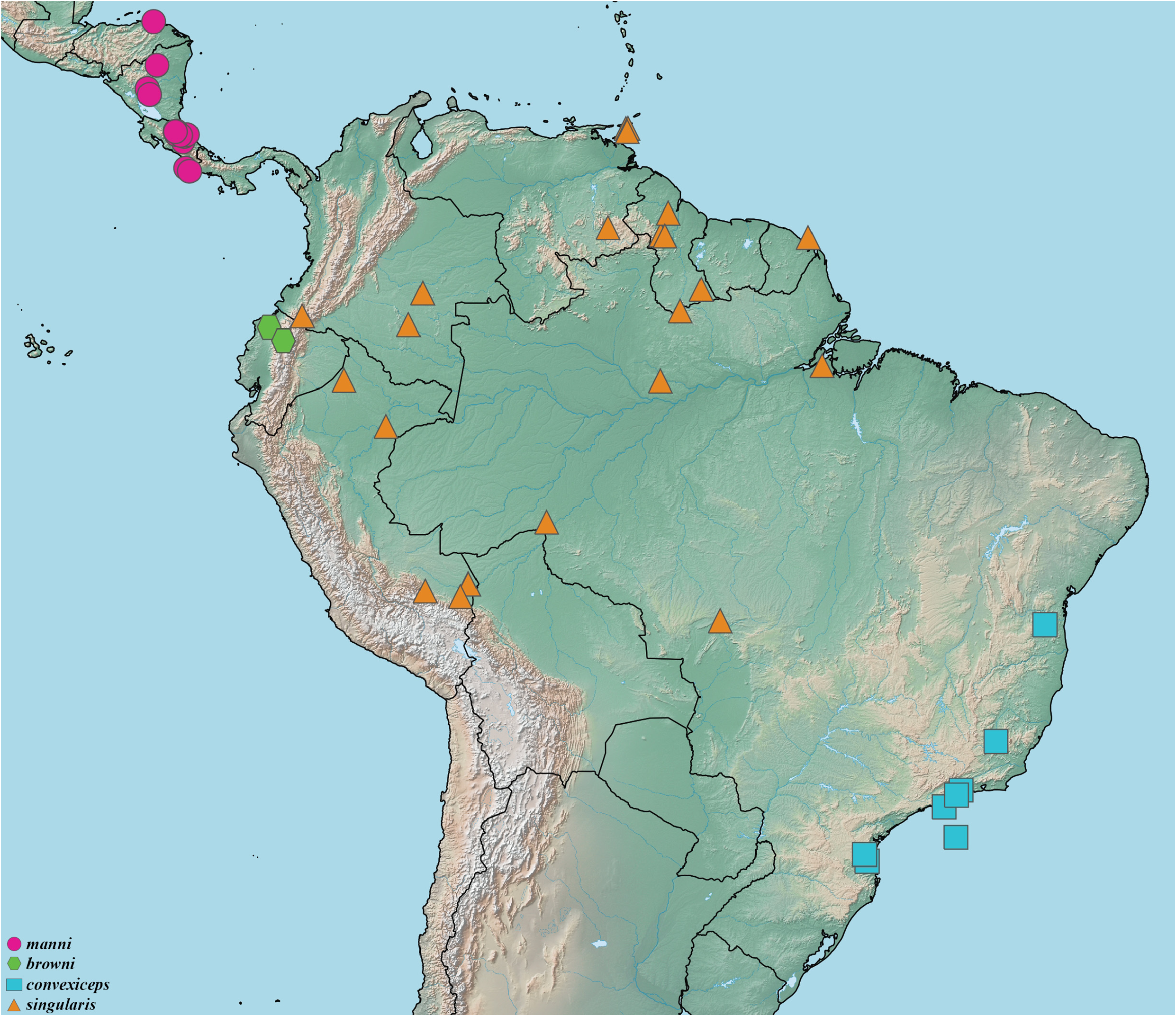 FIGURE 30. Distribution map of Basiceros species from the singularis clade.