Medium size comparatively. Coloration reddish-brown to dark brown; appendages lighter, chocolate to brown. Mandibles generally lighter than predominant body coloration; dorsa covered by obsolete and sparse piligerous punctuation; basal portion with clavate pilosity suberect to subdecumbent; mandibular apex with medium yellowish setae. Basimandibular seta present, narrow and erect. Clavate suberect hair on the dorsum of each stipe. Anterior margin of labrum with long filiform hairs. Clypeal dorsum densely covered with decumbent squamiform hairs. Head with basal layer of hairs with same morphology as clypeal pilosity, slightly more sparse; erect and lightly clavate pilosity as follows: a pair of isolated hairs on the posterior region of frons, close to the median sulcus of vertexal margin; a pair of hairs present or not in front of eyes, a pair near the posterior limit of eyes; six pairs on vertexal corners and eight pairs starting from the superficial emargination projected above the eyes until the vertexal margin. Mesosoma, petiole, postpetiole, and first gastral sternite with basal pilosity short, appressed to decumbent, formed by squamiform hairs. Erect to suberect pilosity on mesosomal dorsum, posterolateral portion of pronotum and gastral segments II–VII relatively abundant, clavate, from whitish to yellowish; pygidium with short, filiform, suberect hairs. A pair of clavate hairs on the anteroventral margin of the postpetiolar sternite. Antennal scapes with whitish to yellowish decumbent pilosity, squamiform; funiculus covered by short, appressed, and yellowish setae. Legs with decumbent and yellowish pilosity, squamiform, becoming thinner towards the tarsus.

Head oblong; posterolateral corners round; vertexal margin concave medially. Vertexal crest present as a ca- rina-shaped lateral lift, close to the beginning of lateral convexity of head. Mandibles aberrant and subtriangular; external margin of basal portion subparallel; masticatory margin straight bearing 14–16 teeth, apical tooth slightly broader and longer; apical portion of mandibles strongly curved ventrally to the midpoint of their length; basal angle acute; basal portion of mandibles slightly convex in lateral view; in full-face view, oblique sulcus present on basal portion, extending from the masticatory margin to at least half of the lamina; with mandibles closed, these opposing sulci converge, with the aspect of a circumflex accent, posteriorly directed. Frontoclypeal surface convex; anterior margin concave. Tumosity present in the central portion of the head dorsum, circular-shaped and with deep concavity, giving it a ring-like appearance. Eyes inserted on the dorsal margin of antennal scrobes, these deep and extending posteriorly to the vertexal margin. Scape flattened and with a biangulate basal lobe, margin between angles concave; external margin lamellar and strongly crenulated. Antennal apical segment longer than the sum of four anterior antennomeres.

Coloration similar or slightly darker than conspecific worker; slightly larger size; mesosomal sculpture more developed. Ocelli present; median ocellus inserted at the posterior limit of the circular concavity on frons; median ocelli inserted close to the median vertexal sulcus. Head pilosity as on conspecific workers; more abundant on frons. Mesosomal pilosity as follows: basal pilosity on pronotum as in the workers and present in the same way, only slightly sparser on mesoscutum and mesoscutellum dorsa; erect and clavate hairs present in the following configuration: two clavate hairs on the central portion of pronotum; 20–22 hairs arranged on the dorsum of mesoscutum; two hairs on each parascutal flange; 4–6 hairs on mesoscutellum dorsum, 2–4 hairs on metanotum. Other pilosity as presented in the conspecific workers. Sculpture very similar to conspecific workers, only stronger marked on some portions, such as the petiole and postpetiole. Mesoanepisternum, meso- and metakatepisternum with smooth and shiny or matt portion, variably (sometimes only part of mesoanepisternum, only the posterolateral corner of the mesokatepisternum or the entire portion of metakatepisternum; never all these portions are smooth and shiny or matt at the same time. Forewing type 2; hindwing with five submedian hamuli.

Body sculpture mainly punctuate-rugose, exception to the mesoanepisternum and metakatepisternum, with portions that are variably smooth and shiny or subopaque; head covered with irregular rugae; mesosoma with irregular rugae on dorsal surface of promesonotum, in the lower portion of the mesopleuron, lateral of propodeum and petiolar peduncle; other integument covered by coarse reticulate punctuations, mainly on the lateral surfaces of the mesosoma, petiole and postpetiole. Gaster densely punctuate-reticulate, punctuations fine.

Etymology. From Greek, “ skambos ”, curved, arched + “ gnathos ”, mandible. Dr. William Brown Jr. must have named this species based on the aberrant shape of its mandibles, whose apical region is conspicuously facing the ventral region.

Comments. Basiceros scambognathus has undergone several taxonomic changes since its description. Smith (1858) describes the species Meranoplus singularis based on the study of a worker and a winged gyne. In 1860, Smith recognized that M. singularis corresponded to another genus and described Ceratobasis to include this taxon based on its peculiar morphology. However, the gyne described two years prior was not compared with the gyne described by Smith in 1858 (Brown 1949) and continued to be considered to belong to B. singularis , a situation corrected through the establishment of the genus Creightonidris by Brown (1949). In their review of Basicerotini, Brown & Kempf (1960) consider Creightonidris as a valid genus, based primarily on its mandibular morphology, although they recognize the close relationship of this genus to Basiceros . Dietz (2004) suggests the combination of Creightonidris in Basiceros based on the comparison of males of this first taxon, unknown until that moment. This combination is formally presented by Feitosa et al. (2007), whose worker description corroborated Dietz’s proposal. It is interesting to mention that Dr. Thomas Borgmeier placed a label on the specimen designated as holotype before its description, classifying it as “ Basiceros n. sp. ”

In the description of the holotype gyne, the measured value for TL is 7.4 mm; Brown & Kempf (1960) add an amendment to this measure, stating that this specimen presents the gaster dilated, adding around 0.4 mm to the total length. Examined workers varied on coloration, pilosity, and body size.

The phylogenetic reconstruction by Probst et al. (2019) suggests that B. scambognathus could be a cluster of putative species hardly differentiated based on the morphological information available at that time. That molecular reconstruction recovered males from three different locations in South America were clustered together, apart from two workers from the state of Rondônia, in Brazil. Additional collections highlight that subtle difference, and those two workers are here identified as B. tumucumaquensis sp. nov. Considering the known Basiceros males, the males of B. scambognathus have unique mandibular morphology, with the apical tooth narrow and projected, isolated from the other teeth on the masticatory margin; this tooth can vary in size, width, and be variably close to the subapical tooth. Additionally, they present the maximum degree of antennal torsion among all known Basiceros males.

Distribution. Brown (1949: 91) discusses the locality of the gyne erroneously associated to B. singularis , in the passage reproduced below:

“It was noted above that I consider this to be the same form Frederik Smith described 89 years ago as the female of Ceratobasis singularis , the only doubt stemming from certain differences in Smith’s figures, which are often inaccurate and vague. I do not know whether Ega [currently Tefé] is the proper locality for Smith’s specimen, but seemingly it was taken somewhere in the Amazon Basin by the famous naturalist Henry Bates. Although Smith cautioned Bates, as he says, to keep good records and proper associations of the castes of one species, it appeared that Smith himself had a perverse genius for mixing up these same records and associations as few have ever done. Most of Smith’s locality records bear little examination, and it is not safe to accept them too specifically for types. Many previous authors have flayed the same hide while themselves committing errors as grievous, so it is perhaps best to let Mr. Smith rest in peace while his detractors have their well-deserved turn.”

However, later collections show that perhaps Smith was not mistaken. Basiceros scambognathus has a wide geographic distribution and there are scattered records in the Brazilian territory, from Minas Gerais (new records) to the Central and Northern States, in addition to French Guiana, Peru, and Venezuela. This species probably occurs in Suriname. New records for the present study are represented mainly by males collected in Malaise traps. Feitosa et al. (2007) mentions that the apparent discontinuity of distribution—in the form of scattered records—may reflect the use of inappropriate techniques for collecting this taxon, as aspects of its natural history are entirely unknown. This taxon was probably collected in southern Colombia (Dr. Benoit Guénard, University of Hong Kong, pers. comm.), but it was impossible to examine such material in the present work, so that record is not confirmed.

Souza & Delabie’s (2013) geographic distribution model for B. scambognathus not only validated the previously known distribution for this taxon but also estimated new areas where the species could be found according to a probabilistic model (see Souza & Delabie 2013, Fig 1 View FIGURE 1 ). According to the authors, it is unlikely for B. scambognathus to be found in areas where the model indicates a lower than 30% chance of occurrence. However, the model shows that the suitable ecological niche for B. scambognathus extends to the biogeographic provinces (sensu Morrone 2006) of Maracaibo, Magdalena, Ecuador and arid West, Choco, the western region of the Isthmus of Panama, the Gulf of Mexico, east of Central America, and the Lesser Antilles, and even to Trinidad & Tobago. Nevertheless, to date, there are no records for this last round of biogeographic provinces. Besides, the distribution model was not sensitive enough to predict the occurrence of B. scambognathus in Salvador (state of Bahia, Brazil) ( Castilho et al. 2007) and showed a low probability of occurrence for SE areas of the state of Minas Gerais —for the present study, specimens from the municipality of Marliéria were examined. Souza & Delabie (2013) point out that the results obtained with potential geographic distribution models restricted to fundamental niches cannot be considered definitive since knowledge of the distribution of a given taxon must also include nesting information (including potential interspecific interactions), dispersal ability, and historical factors.

Natural history. Basiceros scambognathus is one of the most obscure taxa in terms of natural history. The aberrant mandibles of B. scambognathus likely reflect specific predatory behavior. Feitosa et al. (2007) mention that the first dealate gyne was collected in Uruaçu, State of Goiás, Brazil in 1995 (by CRFB) and kept in artificial conditions for a few weeks, with the only behavioral record mentioning the gyne having accepted termites as food. Unfortunately, most records for this species are of males or alate gynes, usually collected with flight-intercept traps, thus preventing inferences about nesting and foraging behaviors and potential interactions with other species .

Although workers recorded so far have been found in litter samples, it is important to mention that the laboratory-maintained gyne (see above) escaped its terrarium and was eventually found dead inside the fungus garden of an artificial leaf-cutter nest of Atta sexdens (Linnaeus, 1758) kept in the same laboratory. Feitosa et al. (2007) conjecture the possibility of B. scambognathus nesting inside Atta (or another fungus-growing ant) nests, partially explaining the difficulty of finding this species in nature. FIGURE 1. Wing venation of Basiceros males. A. forewing and B. hindwing of B. conjugans (RSPPC, Peru). C. forewing of B. manni male (MCZ, Costa Rica: Heredia). Fused veins are indicated with a plus sign and crossveins by a dash. Cell names (in white) are indicated in italics. Scale bars: 1 mm. 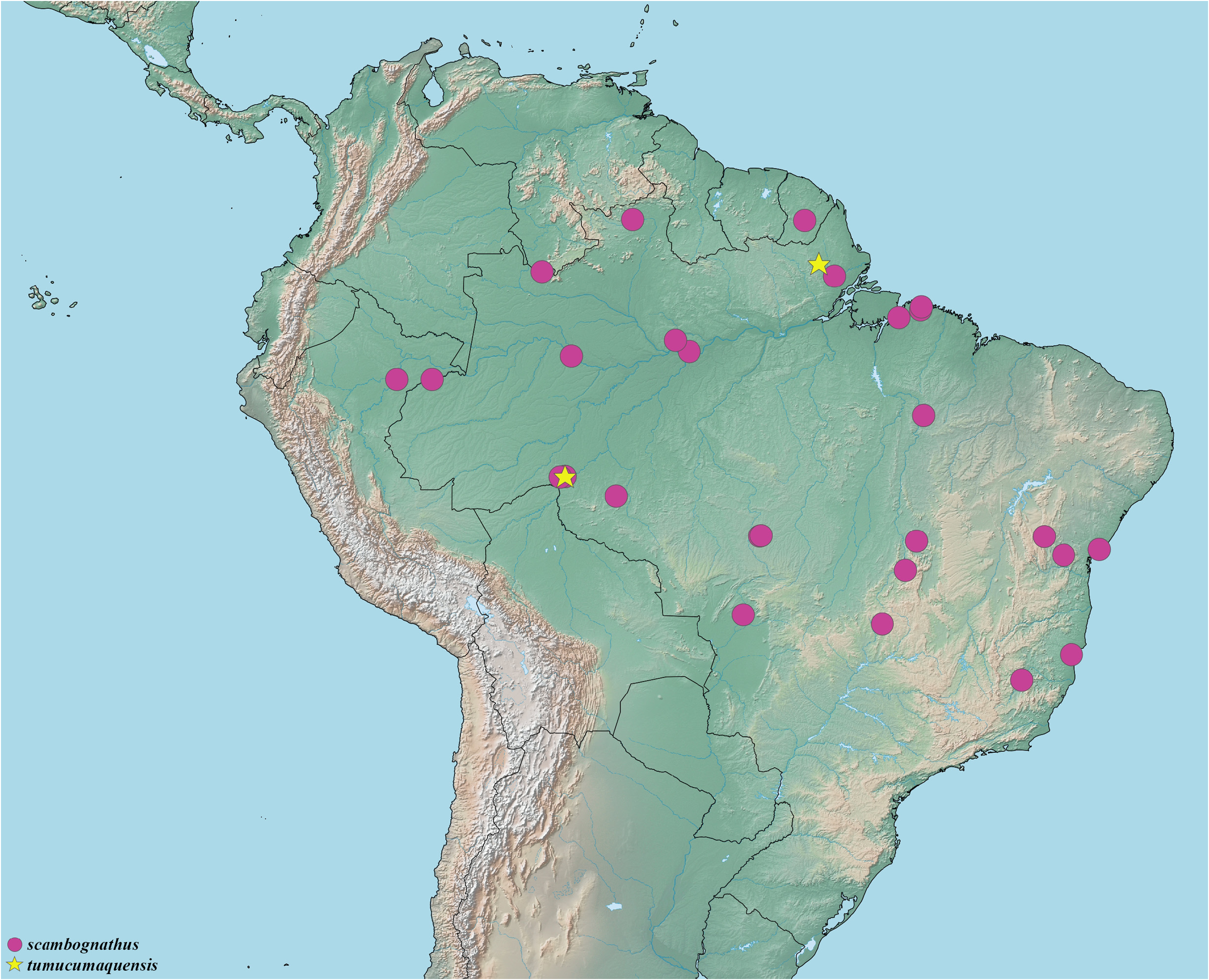