Material examined: Holotype (female) and six paratypes (4 females and 2 specimens of unknown sex) from a moss sample collected in Terras do Pico, Pico Island. All the specimens were mounted in Hoyer’s medium with a small amount of potassium iodide.

Type repository: The holotype (slide N. 5200) is preserved at the Museum of the Dipartimento di Biologia Animale “Marcello La Greca”, Università di Catania in the collection of Binda & Pilato. The six paratypes (BII- 6 to BII- 11) are preserved in the collection of P. Fontoura at the Department of Zoology and Anthropology, Faculty of Sciences, University of Porto.

Specific diagnosis: Small Echiniscus   with unpaired plate 3 present; dorsal plates sculptured with dark knobs surrounded by a ring of small pores. Anterior portion of the median plate 2, anterior portion of paired plates II and III, and median plate 3 with very few or no pores. Apart from the cirrus A, all lateral appendages (B, C, D, E) and dorsal appendages present (C d and D d) are spines.

Leg plates with fine granulation except on leg IV where they present a sculpture with very small knobs and some small pores. A spine (2.4 µm long) is present on legs I; hind legs with a papilla (3.9 µm long) and a dentate fringe with about 13 sharp, triangular teeth 2.6 µm long ( Fig. 1 View FIGURE 1 E).

In Table 1 the measurements of the smallest and the largest (the holotype) specimens are recorded.

Variability: The combination of lateral and dorsal spines was similar in all the seven specimens examined and, besides some differences in length ( Table 2), no asymmetry has been found. Spine C is the longest, followed by D. The length of spine E, in contrast with B, is very variable ( Table 2). The dorsal appendages can be very short spines less than 3 µm long as in the holotype, or relatively long spines (about 15 µm in BII- 7 and BII- 11, cf. Table 2).

Etymology: The name azoricus   refers to the Archipelago of the Azores that includes the Island of Pico, the locus typicus of the new species; azoricus   = from the Azores.

Differential diagnosis: Taking into consideration the pattern of the cuticle ornamentation, the lateral and dorsal appendages present and the characters of these appendages, Echiniscus azoricus   sp. nov. appears different from all the known species of the genus. A few species have a pattern of cuticular ornamentation somewhat similar to that of Echinicus azoricus   sp. nov.: E. bisculptus Maucci, 1983   , E. vinculus   , E. ehrenbergi   , E. curiosus   , E. zetotrymus   (according to Pilato et al., 2005) and E. laterospinosus Rudescu, 1964   , but the new species differs from them.

The new species differ from E. curiosus   and E. zetotrymus   in having cuticular dark knobs less dense; this is particularly evident on the scapular plate, where the pores are larger and forming a ring around each dark knob ( Figs. 1 View FIGURE 1 A, B & D; 2 A & B). The smooth transversal band on the paired plates II and III is less evident than in E. curiosus   and E. zetotrymus   ( Figs. 1 View FIGURE 1 D, 2 A, B & C); in addition, in these species the anterior portion of the median plate 2 is sculptured only on its anterior margin ( Figs. 2 A & C View FIGURE 2. A, E ), and the appendage B is lacking.

E. azoricus   sp. nov. differs from E. eherenbergi   in having more scattered dark knobs, larger and more numerous pores. In E. ehrenbergi   the knobs are often contiguous or fused to one another, and the pores, very small, do not form a true ring around each knob. In addition, in this species the lateral appendages are filaments and the dorsal appendage C d is lacking.

E. laterospinosus   is a nomen inquirendum believed to be composed of two different species ( Ramazzotti & Maucci, 1983). E. azoricus   sp. nov. differs from it in the presence of the median plate 3 and in having lateral and dorsal appendages with a normal base not enlarged. 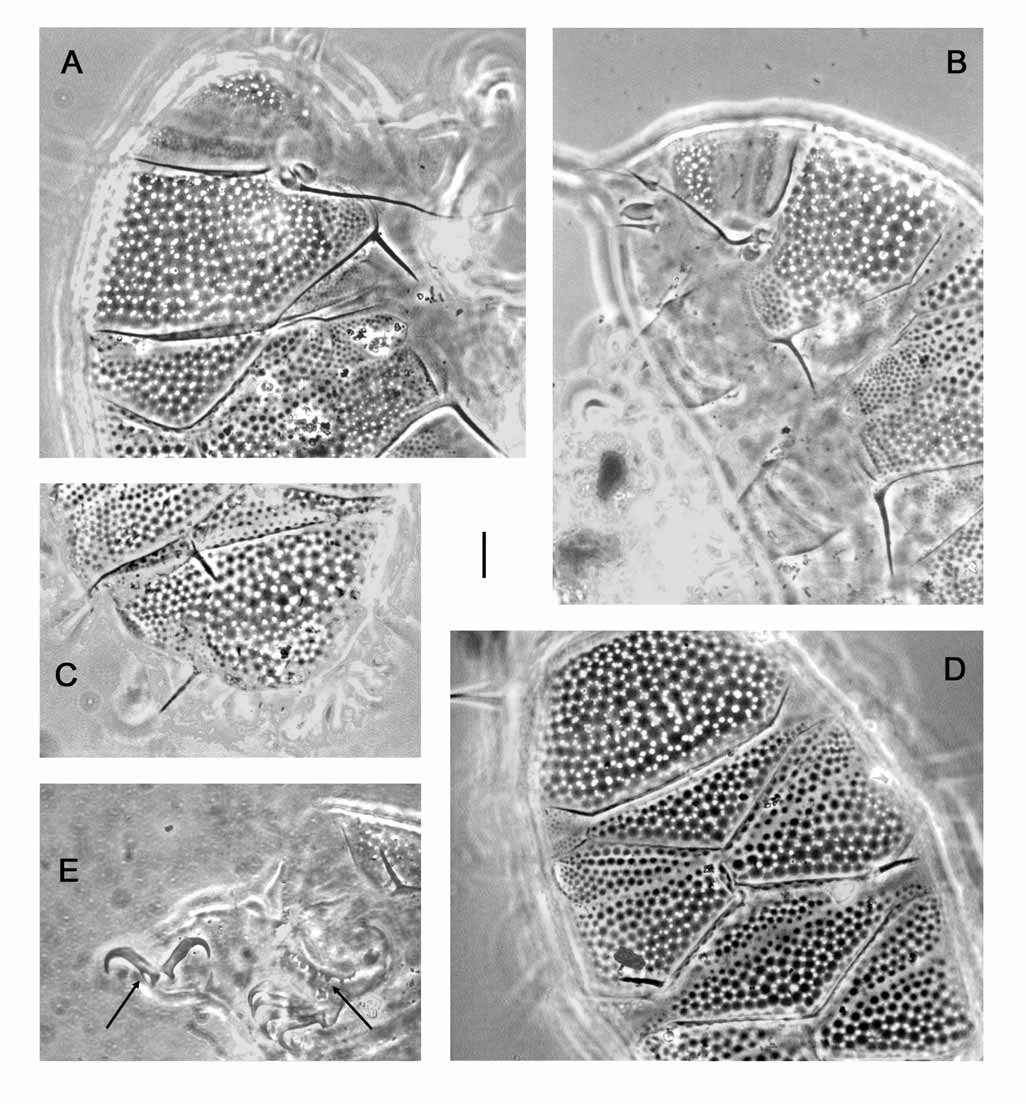 FIGURE 1. Echiniscus azoricus sp. nov. A (holotype), B, C, D (paratype), details of the plate sculpture and appendages; E, claws of the fourth pair of legs of the holotype, the dentate collar, and the spur on one internal claw are visible (arrows). Scale bar = 10 µm.

FIGURE 1. Echiniscus azoricus sp. nov. A (holotype), B, C, D (paratype), details of the plate sculpture and appendages; E, claws of the fourth pair of legs of the holotype, the dentate collar, and the spur on one internal claw are visible (arrows). Scale bar = 10 µm. 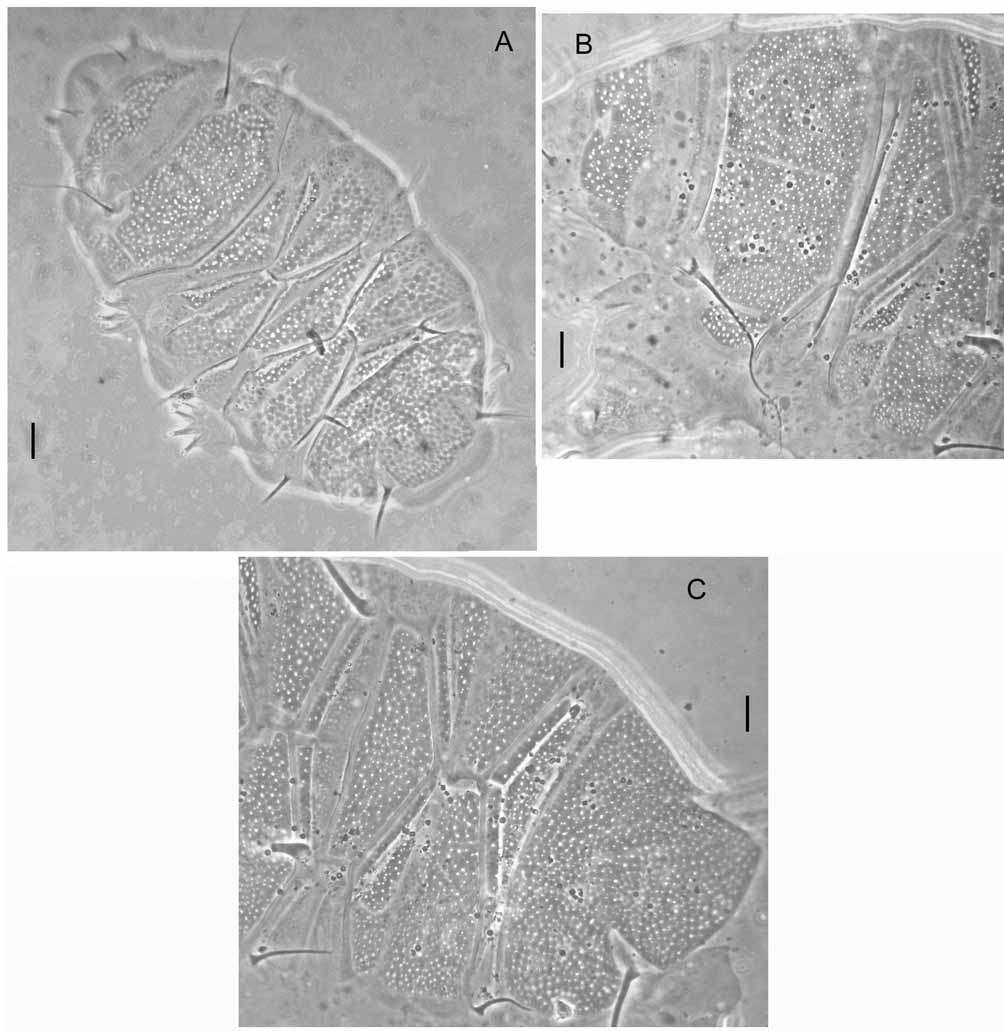 TABLE 1. Measurements (in µm) of some structures of the smallest and the largest (the holotype) specimens of E. azoricus sp. nov. (% bo = percentage of body length; % sc = percentage of scapular plate length).