Etymology: The name (from “sëtymã” = animal leg, and “poku”= long; a noun in apposition) is taken from the language of the indigenous Tupi people and refers to the characteristic legs of this species.

Diagnosis: The new species differs from I. uai   by the male femur IV being straight (curved laterally and dorsally in the basal part in I. uai   ), the male apophysis on coxa IV directed obliquely backwards (basal-half laterad), eyes depigmented (reduced black pigmentation); tubercles on femur IV close to each other, separated by about one diameter (tubercles much more widely spaced); pedipalpal tibia with ectal setae IiiIi (ectal and mesal setae IiIi). See also Table 2 View TABLE 2 .

Description: Male (holotype): Dorsum ( Fig. 1 View FIGURE 1 A): Measurements: Dorsal scute length 3.7; prosoma length 1.4; opisthosoma maximum width 3.3; prosoma width 2.2. Measurements of legs: Table 1 View TABLE 1 . Frontal hump with 4 tubercles, anterior margin with 4 tubercles on each side. Ocularium with reduced and depigmented eyes; with high upwardly directed spine, apex curved backwards ( Fig. 1 View FIGURE 1 C). Each side of ocularium with 7–8 tubercles; 6 tubercles posterior to ocularium. Area I divided, with 5 tubercles on each side; II with two transversal rows of 5–7 tubercles each; III with 9 tubercles; IV with 8 tubercles. Lateral margin with two rows of tubercles from sulci I to III. Posterior margin of dorsal scute with 9 tubercles. Free tergite I with 13 tubercles; II with 10; III with 10. Anal opercle irregularly tuberculate.

Venter ( Fig. 1 View FIGURE 1 B): Coxa I with 17 tubercles; II with 22; III with 12 tubercles; IV and stigmatic area irregularly tuberculate. Posterior margin and free sternites with a row of low tubercles.

Chelicera: Segment I elongated, bulla with 5 tubercles. Fixed finger with 5 equal-sized teeth on the edge; movable finger with 3 teeth.

Penis ( Fig. 3 View FIGURE 3 A–B): Ventral plate subrectangular, with concave base, distal margin straight; apex with an apical and a basal group of 4 long and straight setae on each side, without small intermediary setae. Glans enlarged in basal half, stylus short and thick; ventral process of stylus with serrate distal margin, not reaching apex of stylus.

Female (paratype; Figs 1 View FIGURE 1 F–G, 2 D–E): Measurements: Dorsal scute length 3.2; prosoma length 1.8; opisthosoma maximum width 2.6; prosoma width 1.9. Only characteristics different from those of males are mentioned. Anterior margin of dorsal scute with 1–3 tubercles on each side. Area I with 3–7 tubercles on each side; II with 17; III with 11; IV with 10 tubercles. Posterior margin with 12 tubercles. Free tergite I with 12; II with 11; III with 12 tubercles. Pedipalpal tibia spination: Ectal and mesal IiIi. Coxa IV with a shorter dorsal apophysis (half as long) than in male; trochanter IV with basal and median apophyses half as long or less than in male; tubercles on legs smaller than in male; femur IV with 2 larger dorso-apical tubercles.

Detailed comparison between Iandumoema uai   and I. setimapocu   sp. n.: A brief summary of the morphological comparison is presented in table 2. In general I. uai   has proportionally longer appendages, whereas I. setimapocu   has proportionally smaller eyes. It is noteworthy to mention that the female of I. setimapocu   possesses a dorso-apical apophysis on coxa IV which is proportionally larger than in females of other genera of Pachylinae   (usually with a larger, pointed tubercle dorso-apically on coxa IV). Other relatively similar conditions, i.e. females which have legs with spines and apophyses as long as those of males, are exhibited in some species of Caelopyginae   (see illustrations in Pinto-da-Rocha 2002) and Progonyleptoidellinae ( Kury & Pinto-da-Rocha 1997). The presence of spines and apophyses on coxa IV of females that are as long as in males indicates paternal care ( Machado & Macías-Ordóñez 2007). However, there is no reported case of paternal care in Pachylinae   and the reproductive biology of I. setimapocu   is unknown. Nonetheless, it is worth investigating their reproductive biology to test the hypothesis that paternal care is connected to coxa IV armature in females and to provide additional data for conservation management of the cave and its surroundings.

Distribution: Known only from the type locality.

Biological notes: The Lapa do Zu Cave is 3 km long, traversed by a stream which carries considerable amounts of leaves, tree branches and trunks into the aphotic zone. The air temperature was around 24 °C during colleting. The animals were captured 200–300 m from the main cave entrance, on plant debris close to the stream and on the cave walls, in a very humid place. I. setimapocu   sp. n. shows the following troglomorphism: Body depigmented, appendages elongated, eyes reduced and depigmented.

Biogeographical remarks: The genus Iandumoema   encompasses only two species, I. uai   and I. setimapocu   sp. n., each restricted to a single cave in the State of Minas Gerais. These caves are about 170 km apart in a straight line, with the São Francisco river between them. Dispersion across the subterranean habitat by a common ancestor, now extinct, seems to be unlikely, since these caves are located at different margins of the large São Francisco river. Even if there is a lithographic continuity beneath the river, the limestone spaces would be filled with water (A. Auler pers. comm.), thus precluding the dispersion of terrestrial cave animals. An independent colonization of both caves by an epigeic ancestor, which then was widely distributed in northwestern Minas Gerais, followed by isolation and speciation, seems to be more reasonable. Terrestrial subterranean animal species in Brazil are believed to be of recent origin ( Trajano 1995). The isolation may have occurred in one of the nine Pleistocenic dry phases during the last 210,000 years that were intercalated by short wet phases lasting from several hundred to a few thousand years each, as found for the northern Bahia region ( Trajano 2007). The absence of detailed paleoclimatic records from the study site led us to assume a scenario similar to that suggested for northeastern and southeastern Brazil, which showed wet periods with a certain synchronism ( Wang et al. 2004; Cruz et al. 2005; Wang et al. 2007). Unfortunately, studies on phylogenetic relationships among Pachylinae   species and even Laniatores families are just beginning. Phylogenetic molecular analyses focusing on species closely related to Iandumoema   are also not available, thus making it impossible to correlate isolation and speciation to a dated geological or paleoclimatic event.

Notes on the distribution of Brazilian cave species: About 800 harvestmen species in 13 families occur in Brazil ( Kury 2003). Among them, 30 species in five families ( Sclerosomatidae   ; Escadabiidae   ; Cosmetidae   ; Gonyleptidae   ; and Stygnidae   ) are associated to a subterranean environment. Some are found close to cave entrances and use caves only as oviposition sites and/or as diurnal shelters. These species belong to the gagrellines ( Sclerosomatidae   ), cosmetines ( Cosmetidae   ), goniosomatines and mitobatines ( Gonyleptidae   ); they are considered to be trogloxenes (Pinto-da-Rocha 1995). Others maintain considerable populations in the interior of caves, but also occur outside. These are Verrucastygnus caliginosus   (Pinto-da-Rocha, 1990) ( Stygnidae   ), “ Daguerreia   ” inermis Soares & Soares, 1947 (the only species that cannot be placed in the genus Daguerreia   after it was synonymized with Pachyloides Holmberg   by Acosta (1996); it is currently considered as a species of uncertain taxonomic position), and a few Eusarcus   species (both Gonyleptidae   ). Eleven truly troglobitic harvestmen species belonging to the families Escadabiidae   (Spaeleoleptes spaeleus H.Soares, 1966) and Gonyleptidae   (remaining species) have been recorded from Brazilian caves. Most troglobitic gonyleptids belong to the Pachylinae   ( Discocyrtus   sp., Eusarcus   spp., Giupponia chagasi   , Iandumoema uai   and two undescribed Pachylinae   ), others to the Tricommatinae ( Spinopilar   sp.) and the Pachylospeleinae ( Pachylospeleus strinatii   ). Almost all species live in limestone regions, except for an undescribed Discocyrtus   sp. (Kury in press) in a sandstone cave (see Fig. 4 View FIGURE 4 ). Although most of the diversity of Gonyleptidae   (more than one third of the known 800 spp.; see Kury 2003) was recorded from the coastal Atlantic Rain Forest, an area with some isolated limestone lenses (in southern Bahia, from São Paulo to Santa Catarina States), most of the troglobitic species occur in Central Brazil (Bambuí region, Goiás, Minas Gerais and Bahia States; see Fig. 4 View FIGURE 4 ). There limestone caves are very abundant and covered by the relatively hotter and drier cerrado (Brazilian savanna). Other areas with this kind of rock that is very susceptible to dissolution (and thus to form caves) are Mato Grosso (West of Cuiabá) and the northeastern Brazilian States (approximately at 6 °S). The few surveys conducted there yielded no troglobitic harvestmen up to now. Brazilian troglobitic species are considered by the government as threatened and are listed in a “Red list of threatened species” (Ministério do Meio Ambiente 2003) due to their very restricted distribution (normally only one cave), low population densities and threat by limestone quarrying. 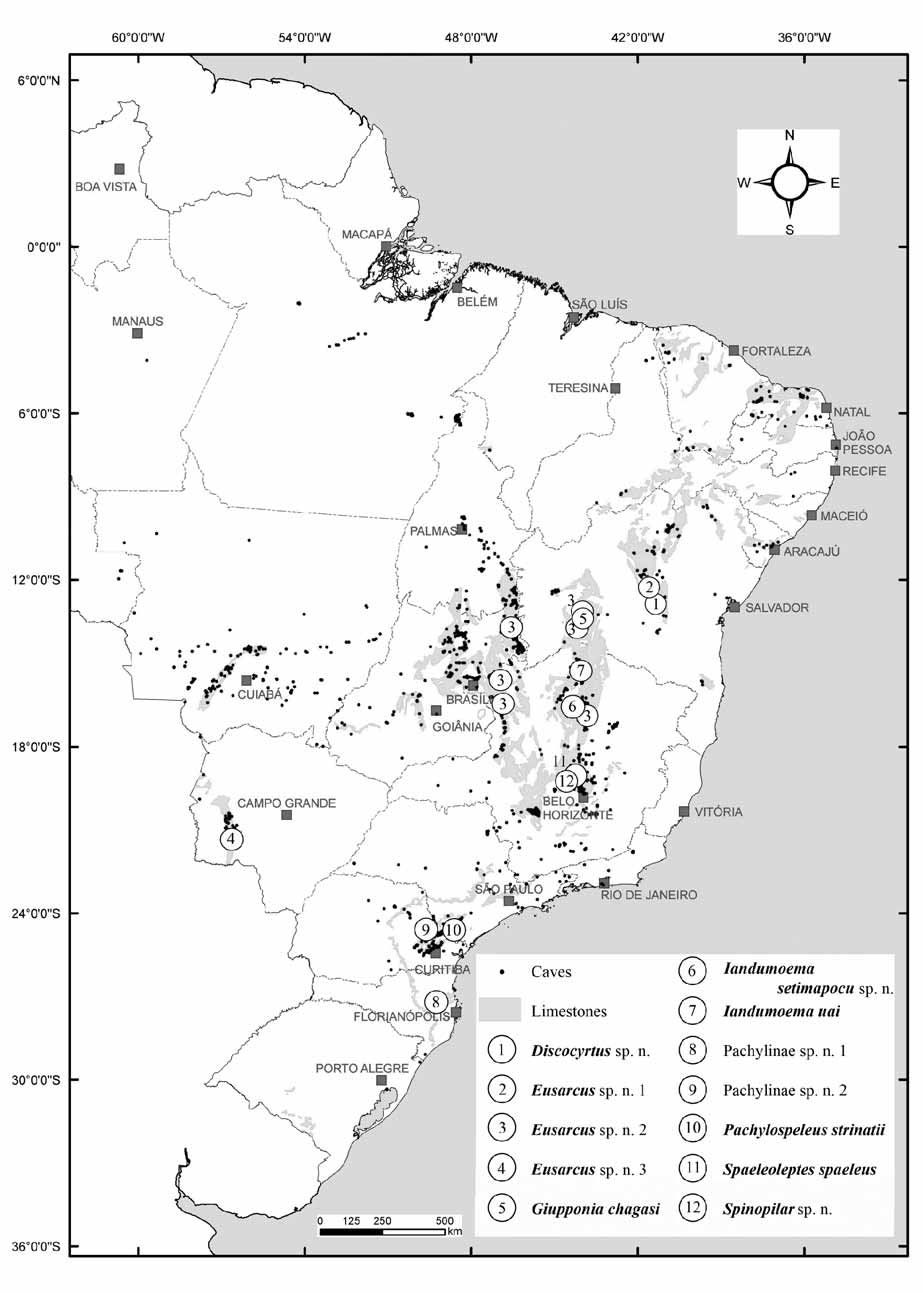