Diagnosis. The only Neotropical species of the Parabezzia uncinata group with females having unequalsized tarsal claws, tarsomeres 5 without ventral swellings, tarsal claws of fore and mid legs long and distinctly unequal-sized, the longest talon of hind claws 1.6 x longer than shorter talon and a wing with setae of the costal fringe uniformly distributed.

Distribution. Guadeloupe; known only from the type locality on Basse Terre.

Derivation of specific epithet. This species is named after our good friend and colleague, Florentina Díaz, in recognition of her valuable contributions to the taxonomy of Patagonian Ceratopogonidae .

Discussion. In the Neotropical key in Spinelli and Grogan (1987), this new Guadeloupe species keys to couplet 16 near P. raccurti Spinelli and Grogan , the females of which differ from our new species in having three posterolateral setae on scutum, legs including tarsi uniformly brownish, shorter equalsized fore claws, shorter greatly unequal-sized hind claws, the wing has a longer radial cell and the costa extends to the wing tip, the anterior portion of the costal fringe is sparse and vein M 1 is more sinuous. In the Nearctic key in Grogan and Wirth (1977), P. florentinae keys to couplet 13 near P. e upetiolata Grogan and Wirth, known only from the holotype female, allotype male and two male paratypes from extreme northeastern New York. As in females of this new species from Guadeloupe, females of this Nearctic species also have five scutellar setae and a similar wing, but, it otherwise differs in having more slender, slightly longer unequal-sized claws with the hind pair much smaller than the fore and mid pair, and the wing has a shorter costa (Costal ratio 0.95 vs. 0.98 in Guadeloupe female). However, this Nearctic species is likely to be a boreal species, and therefore, we consider it highly unlikely that it is conspecific with our new species from Guadeloupe.

Clastrier and Raccurt (1979) described four new species of Parabezzia from Haiti, and these are the only previous records of this genus from the Caribbean region. This new Guadeloupe species is a member of the Parabezzia uncinata group as defined by Grogan and Wirth (1977) in their revision of the Nearctic species and by Spinelli and Grogan (1987) in their revision of Neotropical species. This is the first record of this predaceous genus from Guadeloupe. 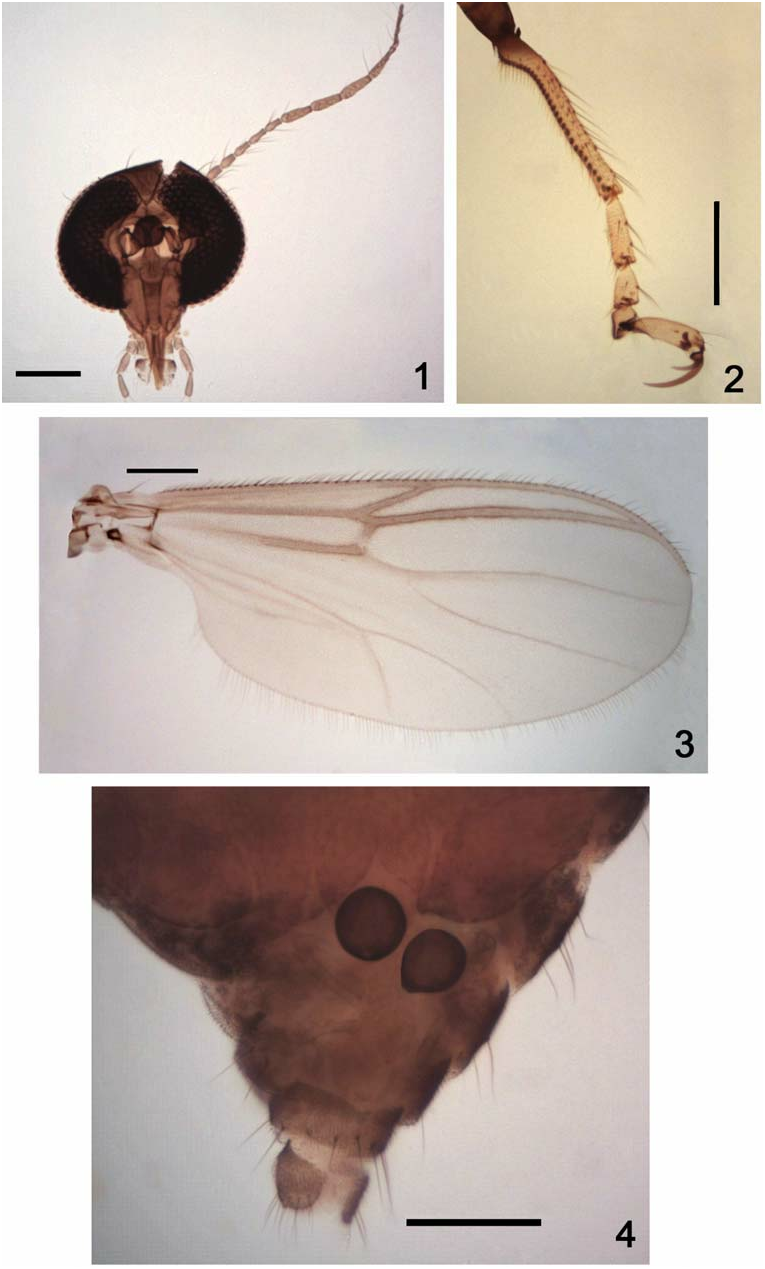