Measurements of different animal cuticular structures, pt values and a descriptive statistical analysis are given in Table 2.

Holotype (MLP-Oi 3726), four paratypes (MLP-Oi 3727) and three eggs are housed at the Museum of Natural Sciences, National University of La Plata ( Argentina), and 32 paratypes are housed in J. Peluffo’s personal collection in the Department of Natural Sciences at the National University of La Pampa ( Argentina). The voucher specimens (two pictures of the hologenophore animals, 16 cryoconserved paragenophore animals, eight paratypes / paragenophore animals and eggs) and a fragment of the lichen are deposited in the MOD:BRT collection of the Department of Life Sciences ( University of Modena and Reggio Emilia , Italy) registered in the Registry of Biological Repositories (www.biorepositories.org).

The name is dedicated in honour of Prof. Reinhardt M. Kristensen, of the Invertebrate Department of The Natural History Museum of Denmark of the University of Copenhagen.

Under SEM, the general surface of the cuticle appears slightly wrinkled ( Figure 2 View Figure 2 ). It should be verified whether this character is an effect of SEM preparation. An egg observed by SEM had processes with filamentous strips on their surface ( Figure 5 View Figure 5 ). These strips seem to be present on the same side of all processes: it is not clear whether they are artefacts or real morphological structures.

Where M. kristenseni sp. nov. appears in a sample, it is either the only or the dominant tardigrade species. In the latter case, it is accompanied by one or more of the following species: Echiniscus rufoviridis du Bois Raymond-Marcus, 1944 ; Milnesium cf. tardigradum ; Ramazzottius cf. oberhaeuseri. The phorophyte of the lichen communities in which it was recorded more frequently is the autochthonous tree species Prosopis caldenia (Burk.) .

Taxonomic remarks. Macrobiotus kristenseni sp. nov. is similar to species of the M. hufelandi group. Among these species, Macrobiotus sandrae Bertolani and Rebecchi, 1993 is the most similar, sharing a weak buccal armature, reduced ventral transversal crests, and indented lunule only on the fourth leg pair, but it differs from M. kristenseni sp. nov. by longer claw accessory points and larger dorsal transversal crests. Macrobiotus kristenseni sp. nov. differs from all the M. hufelandi group of species in that the shape of the egg processes is different from any other egg of the species group. The most similar eggs are those of Macrobiotus recens Cuénot, 1932 , which share similar thin, long, conical processes with a truncated apex but in M. recens an evident series of small indentations around the base of the egg processes is present ( Pilato and Bertolani 2004).

The molecular phylogeny based on the 18S rRNA gene (897 bp) indicates that M. kristenseni sp. nov. does not share its 18S rRNA sequence with any other Macrobiotus species sequenced so far ( Figure 6 View Figure 6 ), but it is in a sister-group relationship with Macrobiotus sapiens Binda and Pilato, 1984 within a well-supported clade grouping all the M. hufelandi group of species (i.e. M. sapiens , Macrobiotus hufelandi C.A.S. Schultze, 1834 , Macrobiotus polonicus Pilato, Kaczmarek, Michalczyk and Lisi, 2003 , Macrobiorus vladimiri Bertolani, Biserov, Rebecchi and Cesari, 2011 ). 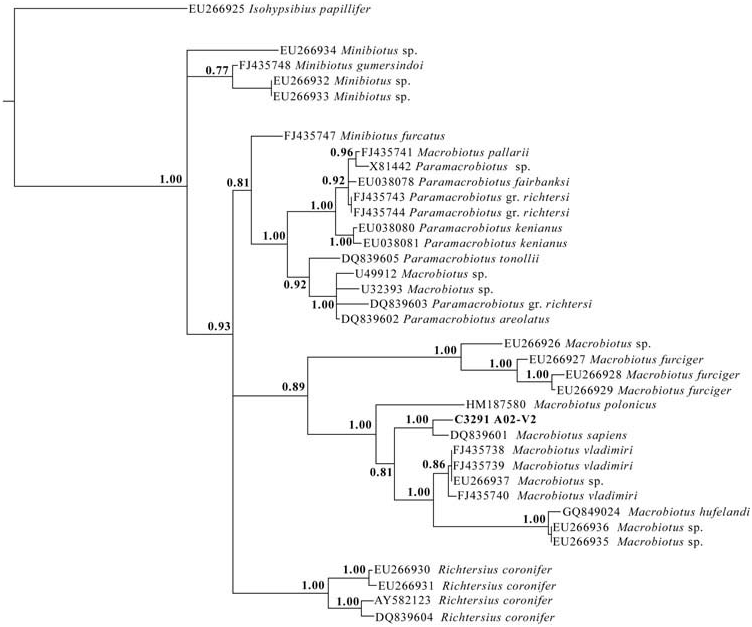