Resembling P. edwardsi   and related species without sexual dimorphism of tibiae; agreeing with description of that species, except as indicated below.

Abdomen. Surstylus ( Fig. 26 View Figures 26–29 ) ovate-lanceolate, distally gradually tapering to obtuse apex, outer surface extensively microtrichose, also with scattered short but rather stout setulae, which may be more numerous on posterior part of outer surface, apical part of inner surface with few setulae of variable size and marginal group of minute setiferous tubercles, at base of inner surface fascicle of short, stout setulae, either not arising from a common prominence, or on very slight prominence; subepandrial process ( Fig. 29 View Figures 26–29 ) with numerous stout setulae towards apex and on inner surface; apex of gonostylus with three or four large setulae and sometimes few much smaller ones, with flat or slightly concave posterodistal densely pustulose zone; bulb of aedeagus without invaginated teeth; cercus ( Figs 27, 28 View Figures 26–29 ) narrowly extended posteriorly, much broadened across base of anterior lobe, with pair of anterior lobes strongly divergent, at broadest part with prominent dorsal (and thus partly concealed) setulose tubercle ( Figs 27, 28 View Figures 26–29 ), on exposed ventral surface with extensive armature of large setulae, becoming sparser and finer on anterior lobe.

Pentachaeta skusei   belongs among those species without sexual dimorphism of the tibiae and with the fore tibia tawny yellow with brown apex. It differs from other such species in having segments 2 to 4 of the fore tarsus tawny yellow (dark brown in related species). The form of the surstylus ( Fig. 26 View Figures 26–29 ) is distinctive, though somewhat resembling that of P. gilliesi   , but the male cercus is very different (compare Figs 27 View Figures 26–29 and 30 View Figures 30–33 ). I suspect that the unknown female will be distinguishable from related species by the coloration of the fore tibia and tarsus, as in the male.

This species is dedicated to Frederick A. Skuse, the first Diptera   specialist employed at the Australian Museum. 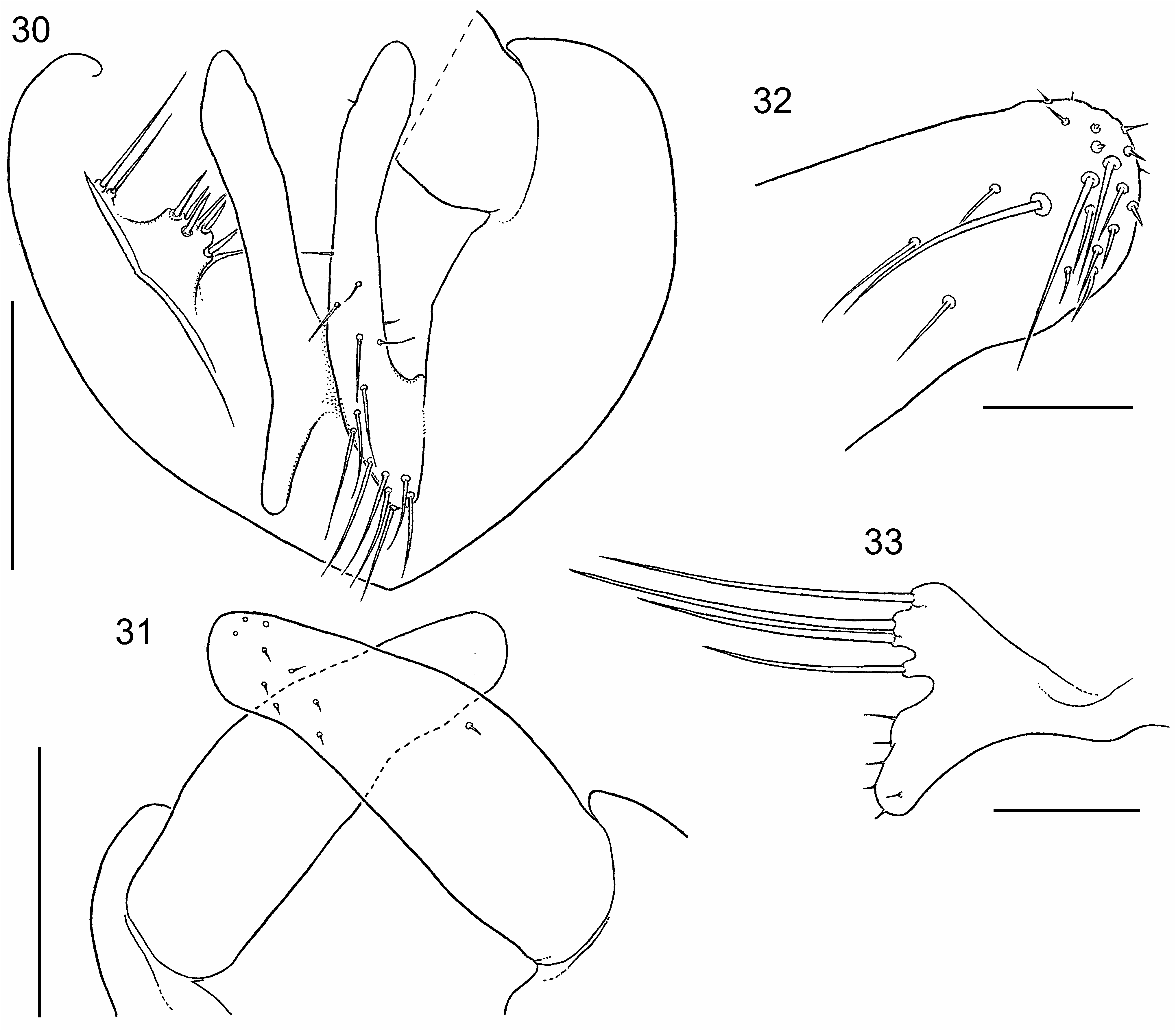