Coloration in ethanol. Dorsal head light brownish grey with some ill-defined dark blotches especially in the back; nuchal band not distinctly broadened, dark brown and with white margins, extending from the neck to the posterior margins of eyes; between anterior margin of eye and nostril some ill-defined and in part connected dark blotches; labials greyish-brown without distinct dots. Dorsum brownish-grey with 4 dark brown transverse bands in between limbs; dark bands anteriorly somewhat lighter, with light margins; anterior three dorsal bands distinctly widened towards vertebral region; the last, not distinctly widened dorsal band is located in the sacral region; more or less distinct dark lateral blotches are discernible between dorsal bands; flanks greyish-brown marbled, somewhat lighter than dorsal surface and darker than cream to grey venter. Lower side of toes and fingers grey; dorsal limbs and digits greyish-brown with dark marbling or blotches. Tail dorsum with about 12 light (whitish-grey) transversal bands; tail tip light; in front of the anterior 4–5 light bands there are black transversal bands; the wide interspaces between these black and white or only white transversal bands are grey in colour. Ventral side of tail anterior dark grey with white spots, posterior paler.

For coloration in life see Figs. 2 View FIGURE 2 and 4–6 View FIGURE 4 View FIGURE 5 View FIGURE 6 . Especially conspicuous are yellow portions in the pattern, such as the light borders of the dorsal bands including the nuchal and neck band. Here, especially the dorsal tubercles are brightly yellow in colour. Also parts of the ciliaries, the posterior supralabials, and the overall surface colour of limbs, head and body are yellow to yellowish-beige (which seemingly fades to brownish grey in preservative).

Variation of paratypes. For the variation of paratypes see Tables 1–2. Males are somewhat smaller than the females: SVL males 51.1–73.5 mm (64.8 ± 6.5 mm), n = 14; females 63.5–75.3 mm (71.7 ± 4.9 mm), n = 5. Paratypes largely correspond with the description of the holotype. Noteworthy differences are up to about 19 ill-defined dorsal tubercle rows at midbody, 7–10 enlarged poreless femoral scales on each hind limb in males, and minimally 10 enlarged scales in the precloacal region. Concerning the colour pattern, most of the male and female paratypes show a more or less distinct dark stripe stretching from the anterior corner of the eye towards the nostril. Several paratypes also have up to five dark dorsal bands between limbs, and some of them are irregular shaped (such as Y-shaped), medially interrupted or developed only at one side of the dorsum.

Dark lateral blotches between dorsal bands are only discernible in some paratypes and are also lacking in the single juvenile paratype. The male paratype IEBR A.0932 is especially brightly coloured (see Fig. 6 View FIGURE 6 ), with intensive black blotches on the head, deep black transversal dorsal bands and bright yellow tubercles in lighter interspaces. In this specimen, the gular region is dark grey with light blotches in preservative, which are yellow in live. Such a throat pattern is more or less also discernible in some other adult paratypes as well as in the juvenile paratype. The latter specimen also has a white posterior half of the tail with only faint dark transversal bands, which differs from the adult condition. Original tails of adults may show thin, bright yellow borders of dark transversal bands, with light interspaces of last third of tail being white.

In comparison with Vietnamese congeners, Cyrtodactylus roesleri sp. nov. is distinguishable from C. cattienensis , C. cryptus , C. huynhi , C. irregularis , C. pseudoquadrivirgatus , and C. ziegleri by the presence of transversally enlarged subcaudals which are lacking in the latter species. Cyrtodactylus roesleri sp. nov. furthermore has series of 20–28 precloacal and femoral pores in males, and 17–22 in females, whereas precloacal pores are completely lacking in males of C. badenensis , C. eisenmanae and C. grismeri , or are lacking or only rudimentarily developed in males of C. nigriocularis (0–2) and C. paradoxus (0–4); in addition, Cyrtodactylus roesleri sp. nov. differs from C. phongnhakebangensis in a lower number of precloacal and femoral pores in males (20–28 versus 32–42), and the new species differs from the remaining species by distinctly higher pore counts: C. caovansungi (9 PP + 6 FP), C. chauquangensis (6–7), C. condorensis (4–7), C. hontreensis (7–8), C. intermedius (8–10), and C. takouensis (3–4 PP + 1 FP). For detailed comparisons see Table 3.

nuchal band enlarged in neck region enlarged in neck region (triangular) not enlarged in neck region Compared with the sympatric species Cyrtodactylus cryptus and C. phongnhakebangensis , Cyrtodactylus roesleri sp. nov. at first glance mostly resembles the latter species. Here, closer examination allows for proper separation (see Table 4). In addition, C. phongnhakebangensis is a relatively large species and we examined a subadult C. phongnhakebangensis with a SVL of 79.4 mm (which is beyond the currently known maximum SVL of adult Cyrtodactylus roesleri sp. nov.), that still showed the juvenile colour pattern on its tail, i.e. light dorsal tail bands that are completely yellow at base, and becoming lighter towards the tail tip which is completely white.

Etymology. We name this species after our friend and colleague Herbert Rösler to honour his long-term engagement in breeding and studying geckonid lizards. Herbert Rösler published several books dealing with geckos and is specialized in geckonid morphology and taxonomy, which resulted among others in the description of diverse new gecko species.

Ecological notes. Most of the observations took place at night. The specimens were usually found on karst outcrops in limestone forest, at a height of about 1–1.5 m (sometimes also at 2 m height) above ground (even during rain). 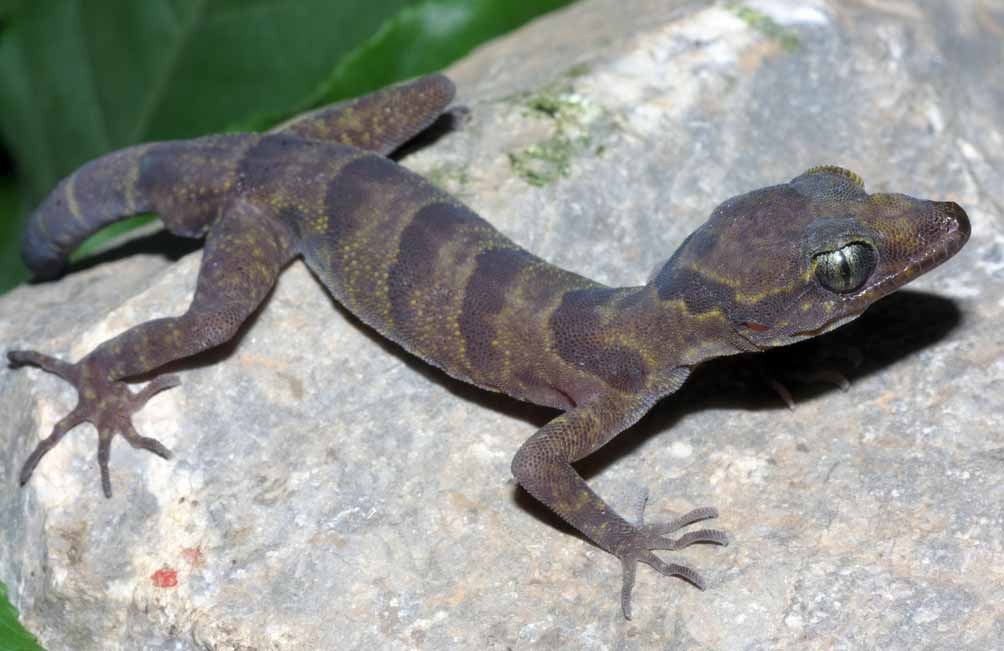 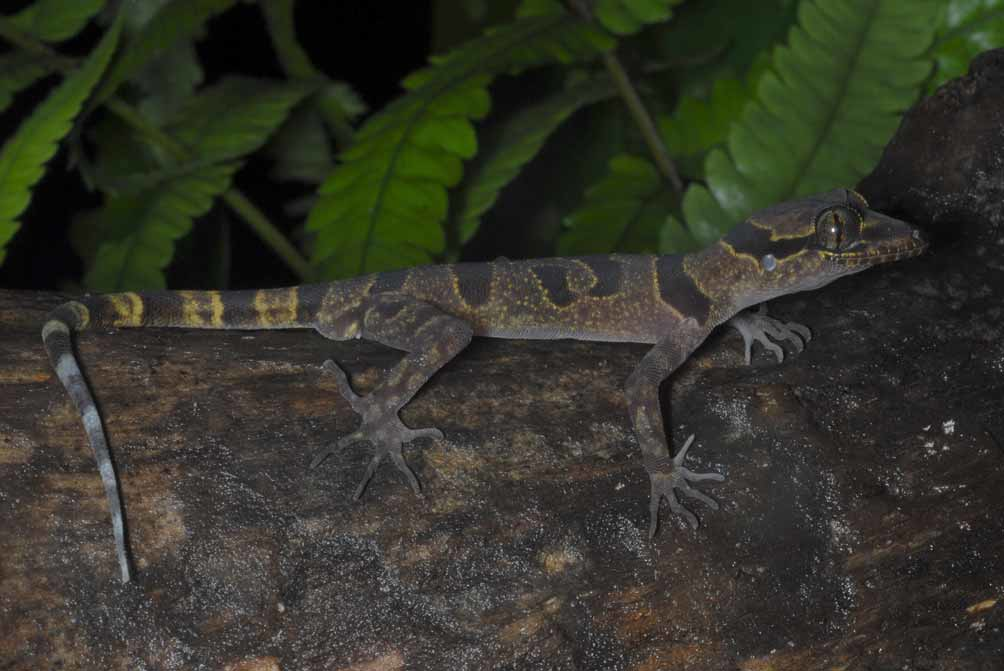 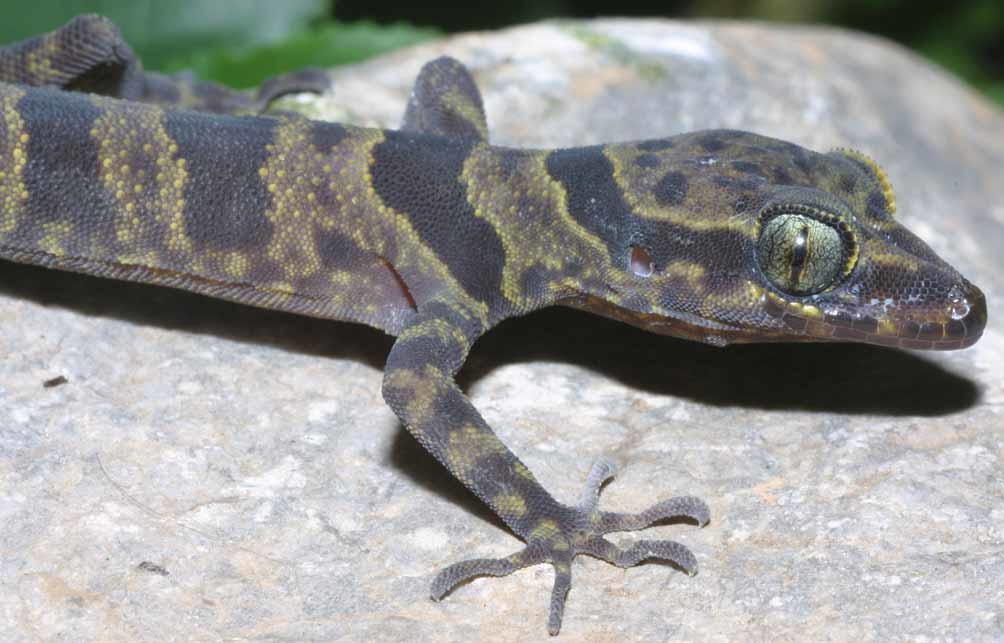