Parapodia of anterior or thoracic setigers with prominent shoulders ( Figs. 1 View FIGURE 1 A–B, 2A–B); dorsum elevated along body with parapodia shifted to a more medial position ( Fig. 1C View FIGURE 1 ). All setae smooth capillaries, some long, but natatory-like capillaries not present. Anterior noto- and neuropodia with fascicles of 10–12 long capillaries, reduced to 7–8 in middle segments and 5–6 in posterior segments.

Remarks. Previous records of Aphelochaeta from the Caribbean have been referred to A. marioni ( Saint-Joseph, 1894) originally described from the Dinard area on the Atlantic coast of France (see Dean 2012 for Caribbean records).Although reported widely, as with many cirratulids, A. marioni is poorly known and no type specimens are believed to exist ( Blake 1996). Although not based on specimens from the type locality, the description of A. marioni by Hartmann-Schröder (1996) from German waters represents the most recent characterization of the species and depicts A. marioni as having three prominent peristomial rings that cross the dorsum, dorsal tentacles arising from the level of setiger 1, no dorsal crest, and the first branchiae from setiger 1. Hartmann-Schröder’s depiction of A. marioni is important because most known species of the genus have a pair of branchiae positioned in close proximity to the dorsal tentacles on the peristomium or have two pairs of branchiae on setiger 1 ( Blake 1996, 2018; Doner & Blake 2009; Magalhães & Bailey-Brock 2013; Dean & Blake 2016). With no branchiae on the peristomium or second pair on setiger 1, Aphelochaeta caribbeanensis n. sp. is thus more similar to Hartmann-Schröder’s concept of A. marioni than most other described species. Two recently described species that also lack a pair of branchiae associated with the dorsal tentacles are A. malefica Elías & Rivero, 2009 from Argentina and A. intinctoria Choi, Juneg & Moon, 2018 from Korea.

The specimens of A. caribbeanensis n. sp. from Panama and Honduras described here differ from Hartmann- Schröder’s (1996) depiction of A. marioni in having only one or two weakly developed lateral peristomial rings where the grooves do not cross the dorsum of the peristomium and in having rather than lacking a prominent dorsal crest. It is likely that previous records of A. marioni from the Caribbean are the same as A. caribbeanensis n. sp.

Aphelochaeta malefica differs from A. caribbeanensis n. sp. in having an elongate pre-setiger region twice as long as wide and three prominent peristomial rings the first of which crosses the dorsum and the second and third of which are interrupted by a narrow dorsal crest that extends posteriorly between the parapodia of setiger 1 ( Elías & Rivero 2009). In contrast, the peristomium of A. caribbeanensis n. sp. is short, as long as wide, or only slightly longer than wide. In addition, there are only 1 – 2 peristomial rings apparent only laterally and a large, oval-shaped dorsal crest surmounts the entire peristomium.

Aphelochaeta intinctoria from Korean waters is similar to A. caribbeanensis n. sp. in having weakly developed lateral peristomial rings and the peristomium surmounted by a dorsal crest ( Choi et al. 2018). A. intinctoria differs from A. caribbeanensis n. sp. in having an elongate pre-setiger region that is twice as long as wide instead of as long as wide or only slightly longer and by having three lateral peristomial rings instead of one or two. More importantly, the anterior body segments of A. intinctoria are elongate, inflated, not crowded and the middle and posterior body segments are moniliform in shape. In contrast, most body segments of A. caribbeanensis n. sp. are narrow and crowded throughout with only a few middle segments enlarged; no segments are moniliform.

Etymology. The species is named for its location in the Caribbean Sea.

Distribution. Honduras to Panama, in sediments associated with mangrove and seagrass; intertidal to 5 m. 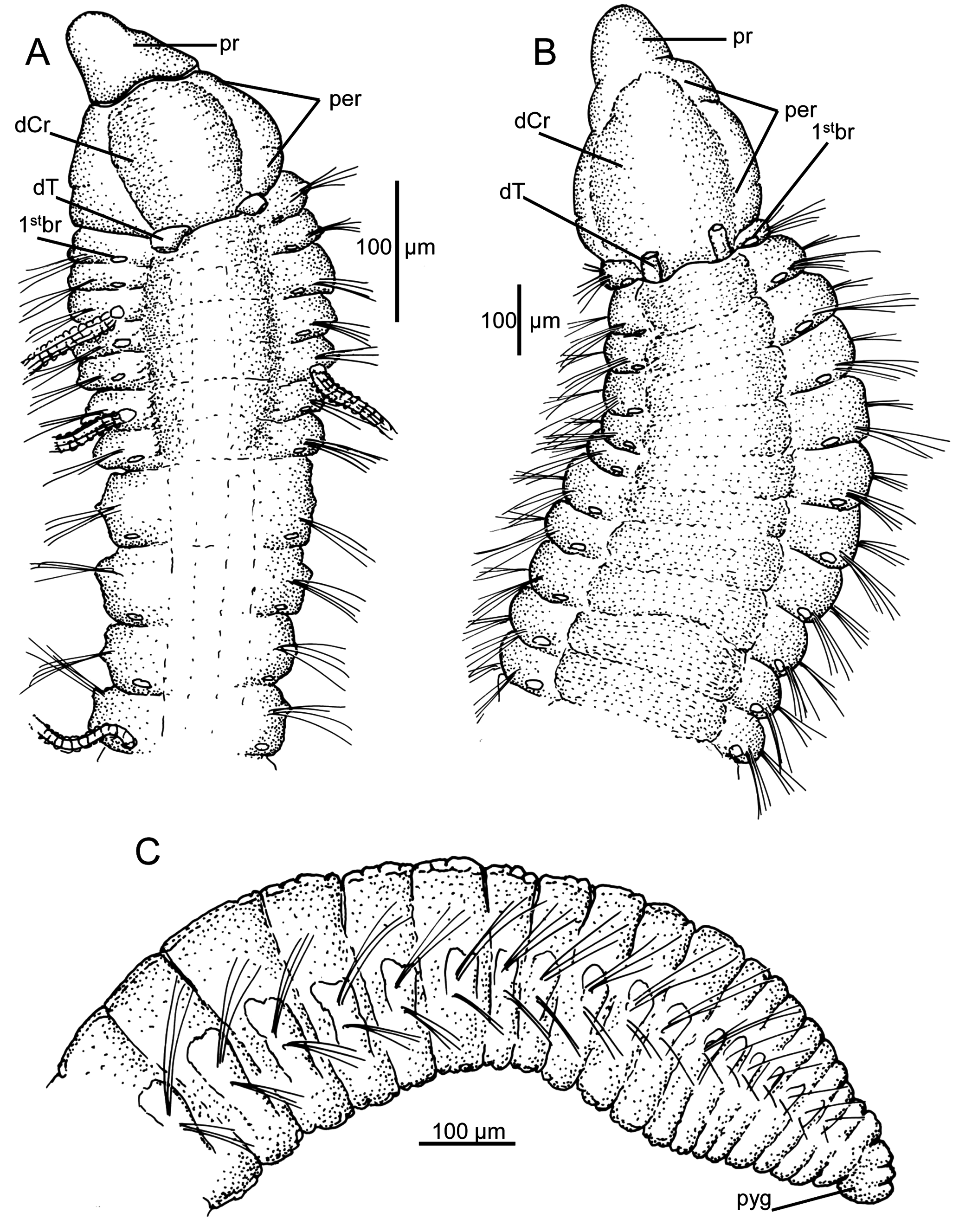