Diagnosis. Chloeia with ventral cirri of similar size throughout body; bipinnate branchiae from chaetiger 4; dorsum with a dark longitudinal band, with an anterior expansion (T-shaped) in each segment; chaetal bundles homogeneously pale.

Juveniles. Specimens 10 mm long already have a middorsal band running throughout body ( Fig. 5A View FIGURE 5 ), and the dorsal pattern starts along a few anterior or distal segments, and median segments have two posteriorly convergent bands ( Fig. 5B View FIGURE 5 ); antennae and palps dark purple, and anterior surfaces of parapodia have a blackish hue; chaetae are homogeneously pale.

Remarks. Hartman (1938) overlooked Schmarda’s (1861) original description and illustrations ( Fig. 14C View FIGURE 14 ), and based her identifications of C. viridis after Monro’s (1933) characterization. As indicated above, Monro followed Augener (1925) conclusion. Hartman, consequently, described the pigmentation pattern as consisting of three longitudinal dorsal bands (this pattern corresponds to C. pseudeuglochis ; see above). In addition, she emphasized the presence of violet cirri, which is shared by several species in the genus ( Table 1 View TABLE 1 ). As indicated above, C. viridis differs from C. euglochis even in small specimens (see figure 5C–F). In the original description, Schmarda (1861) emphasized that the greenish pigmentation in live specimens turned violet when preserved in alcohol. In fact, the white greenish pigmentation together with the orange-brown coloration are lost in preserved specimens, but the main violet middorsal band remains. The other reason for regarding C. viridis a juvenile was because the type was 29 mm long and would presumably turn into the colorful adult C. euglochis was rejected after finding 10 mm long specimens of C. euglochis having red-banded notochaetae and complex dorsal pigmentation. Additional evidence was provided by Nonato & Luna (1970) by describing larger specimens. They noted their material, being 28–52 mm long, had (translated) a middorsal wide (violet) band, expanded in the anterior margin of each segment, and the rest of the back was uniformly white-yellowish. Schmarda (1861) described and illustrated notochaeta from median chaetigers as serrated, while in anterior chaetigers the notochaetae and neurochaetae are furcate.

The type material is labeled as cotypes ( Fig. 12E View FIGURE 12 ), and the term is equivalent to syntypes ( ICZN 1999, Art. 73.2.1). Further, the locality was indicated as Yamaika, but it was Jamaica, as indicated in the original description ( Schmarda 1861: 146). Some records do not have details about pigmentation, often because their specimens were small, and its specific affinities cannot be confirmed ( Rioja 1958; Day 1973; Gathof 1984).

On the other hand, a nomenclatural note is needed for clarifying the status of Chloeia candida Kinberg, 1857 , from the Virgin Islands, which could have priority over C. viridis , and of C. pallida Kinberg, 1867 , from northern Brazil.

Hartman (1949: 37) indicated that the type of C. candida is 13 mm long, with 22 chaetigers. The specimen is a juvenile which did not have any color at all, and it was described as having bipinnate branchiae from chaetiger 2, but Hartman noted them from chaetiger 4. In the original description ( Kinberg 1857: 11), no pigmentation was noted. The original description was repeated, and one plate was published later (Kinberg 1910: 33, Pl. 11, Fig. 2A View FIGURE 2 ), and the whole specimen in dorsal view shows a hint of middorsal pigmentation, but because it was not indicated as a black longitudinal band, it might be the remains of the dorsal blood vessel. This feature, together with the fact that the chaetae do not show a reddish banding, has moved some authors to regard it as the same as C. viridis , including Hartman (1949: 38), and consequently C. candida would have priority over C. viridis . Regretfully, the smaller specimens Ehlers (1887) studied and informally named as C. modesta are of similar size as C. candida , being 12–16 mm long and with 22–25 chaetigers. These specimens also lack dorsal pigmentation pattern and their chaetae do not show the colorful bands typically seen in larger specimens. Consequently, on the basis of the information provided by the holotype, which is a juvenile, Chloeia candida Kinberg, 1857 must be regarded as indeterminable. A reversal of precedence, as indicated in the Code of Zoological Nomenclature ( ICZN 1999, Art. 23.9), cannot be applied because C. candida was recently used as a valid name ( Alós & Nüñez 2012: 53), and because they regarded it as the senior synomy of C. viridis and C. euglochis ( Parapar et al. 2012: 388) , they extended their distribution to the Eastern Pacific, Western and Eastern Atlantic ( Alós & Nüñez 2012: 53). We disagree with their conclusion and think that species have a more restricted distribution to the Western Atlantic. The Eastern Atlantic species belongs elsewhere.

On the other hand, Chloenea pallida Kinberg, 1867 is a nomen nudum because only the name was made available in the original publication ( ICZN 1999, Art. 12). Hartman (1949: 38) studied the holotype and noted it was another juvenile of a Chloeia species, having only 18 chaetigers. However, this does not make the name available. 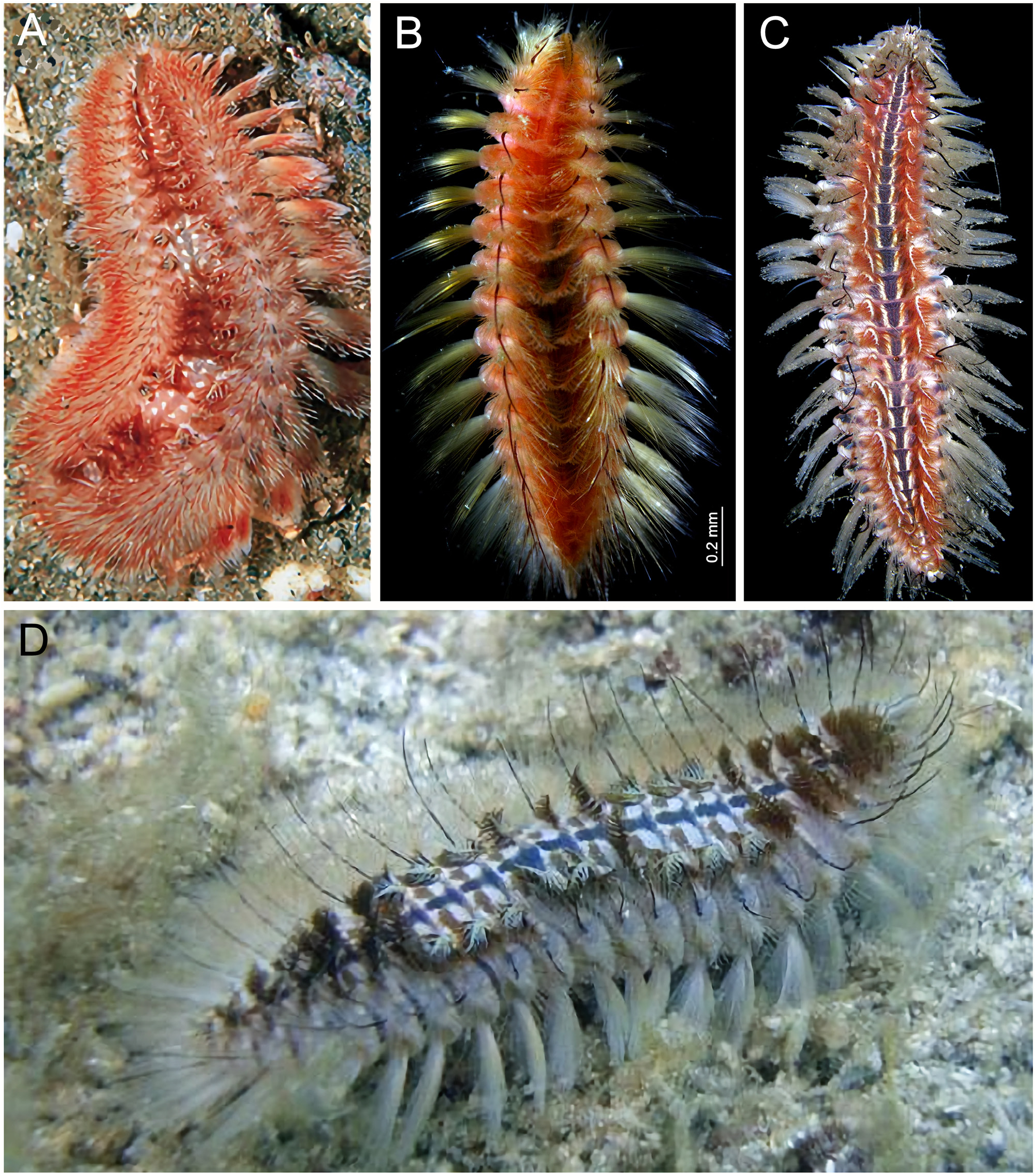