Colony form: Unfortunately, there is nothing remaining of the syntype lodged at the Museum of Natural History , Wroclaw University, Poland (MZW #49), only the sponge on which it grew. No further mention is made of this syntype.

The lectotype is a tiny, encrusting colony growing on a small cream sponge ( Fig. 16View FIGURE 16 A, B). The piece of sponge is approximately 20 mm long and 15 mm wide with the octocoral colony growing on only a small part of it. The colony is difficult to discern on the very similar coloured sponge but there are very few remaining polyps and they are quite damaged. Three polyps are grouped close together at one end of the sponge. They appear to be attached to one another via stolons and a spreading membrane as mentioned by Kükenthal (1913), with no discernible branching.

Polyps and calyces: Calyces are prominent and approximately 2 mm tall (Kükenthal mentioned 2.5 mm tall) formed from a thin layer of sclerites ( Fig. 16View FIGURE 16 C). Some appear to have rounded longitudinal furrows but they are not pronounced. In most of the remaining polyps, the polyp body is partly retracted such that the base of the polyp head rests on the lip of the calyx, hiding the polyp neck. The polyp heads are approximately 1.5–1.7 mm wide and polyps are approximately 1.5–2 mm tall (2.5 mm tall in Kükenthal’s description). There are some smaller polyps, possibly juveniles (0.9 mm wide and 1.2 mm tall). The tentacles fold over the mouths of the polyps forming eight distinct furrows on the polyp head and a star-liked apex to each polyp. The number of pinnules per tentacle could not be determined.

Medulla and Cortex: No medulla evident.

Sclerites: All polyps, calyces and colony surface are covered in a dense layer of sclerites, chiefly sticks and spindles. Sclerites on the polyp head are in a clearly defined collaret and points arrangement ( Fig. 16View FIGURE 16 D). At the collaret, sclerites are basically transverse but grade en chevron up the points to become longitudinal in the distal part. These sclerites are short, straight or only slightly curved rodlets and spindles with fairly sparse, conical tubercles ( Fig. 16View FIGURE 16 F). The lengths of the sclerites are 0.1–0.3 mm (mostly 0.1–0.2 mm) only, making them significantly smaller than those found in other Anthothela  species.

Distal from the points, sclerites continue longitudinally to obliquely, along the aboral side of the tentacles ( Fig. 16View FIGURE 16 E). They are curved rodlets and spindles, some slightly clavate, with sparse, conical tubercles ( Fig. 16View FIGURE 16 G), and they grade in size from largest at the proximal end of the tentacle to smallest distally and seem to curve around the sides of the tentacles. Tentacle sclerites are 0.14–0.34 mm long which again is smaller than the range found in other Anthothela  species but the ranges do overlap.

In the pinnules are found very short, almost squat, spatulate clubs, with a narrow handle and a flattened, wide tip, along with numerous short rods ( Fig. 17View FIGURE 17 A). The spatulate tip is oriented distally in the pinnules and some of them have quite well developed ‘teeth’ or jagged edges. Spatulate clubs range from 0.09–0.16 mm only—much smaller that the equivalent spatulate clubs in A. grandiflora  where the range is 0.26–0.5 mm. The rodlets are short and narrow, with simple, small tubercles, and are also crowded longitudinally in the pinnules ( Fig. 17View FIGURE 17 A). They range in size from 0.06–0.18 mm.

On the calyx, sclerites are arranged at all angles in a relatively thin but crowded layer. Sclerites again are straight, short rods and spindles with sparse tubercles, ranging in size from 0.16–0.34 mm ( Fig. 17View FIGURE 17 B). One straight club with a thickened distal tip was found ( Fig. 17View FIGURE 17 Ba), which corresponds to a sclerite figured by Kükenthal (1913), although he states it is from the top part of the polyp.

No samples of a pharynx were examined, so the presence, absence or nature of sclerites in the pharynx remains undocumented.

Surface sclerites are a mixture of two sorts: short, straight, tuberculate rods and spindles (0.07–0.18 mm long) ( Fig. 17View FIGURE 17 C) and longer, straight sticks and spindles, mostly smooth or with minimal tubercles, sometimes with forked ends (0.13–0.24 mm long) ( Fig. 17View FIGURE 17 D). The latter are reminiscent of the sclerites found in the medulla of other species of Anthothela  .

Variability: A small fragment of the specimen USNM 57981 was examined. The largest portion of the colony consists of four narrow branches emanating from a membranous base with some anastomoses evident; it has no main stem and calyces are distributed throughout but also tend to form terminal bunches ( Fig. 17View FIGURE 17 E). There is an additional fragment ( Fig. 17View FIGURE 17 F) that has well-defined ridges on the calyces and most of the polyps partly retracted so only the top part of the polyp head is visible in the mouth of the calyx. The fragment examined was a small branch tip with a few polyps crowded together ( Fig. 18View FIGURE 18 A). The tallest polyp is partly extended and is 1.5mm tall and 1.6 mm wide ( Fig. 18View FIGURE 18 B) while the calyces are approximately 1.5–2.5 mm tall and 1.5–1.8 mm wide. Under a dissecting microscope the sclerites are opaque and white and they are brown under transmitted light, perhaps indicating the specimen was originally fixed in formalin. There is slight damage evident in some of the sclerites. The fragment available for examination is small, and the only medulla portion available is affected by the junction of a polyp, so it is impossible to be definite regarding coelenteric canals penetrating the medulla and even the expected boundary canals are distorted and difficult to discern. Nevertheless it is clear there is an axial medulla and a cortex.

Distribution: In deep water off the west coast of USA and Canada, specifically southern California, USA and Strait of Georgia, Canada.

Williams (2000) defines the distribution for Clavularia pacifica  as “southern California (Monterey Bay to San Diego County)”. This includes the specimens identified as Sympodium armatum  by Nutting (1909).

Remarks: At this stage, it has not been possible to confirm when and who proposed Clavularia pacifica  should be reassigned to Anthothela  . Molander (1929) simply listed C. pacifica  as “ Scleraxonia  ( Briareidae  ?)” with no accompanying reasons or discussions. No further mention has been found in the literature until Bayer (1961) where, in the remarks of his description of Anthothela tropicalis  , simply stated that A. pacifica (Kükenthal)  is a sister species to A. tropicalis  . There is no discussion regarding why or when Bayer believed C. pacifica  had been reassigned to Anthothela  . Currently Clavularia pacifica  is still listed as a valid species in some international databases, and Williams (2000) mentions C. pacifica  in a comparison with the new species Cryptophyton goddardi Williams, 2000  .

There is so little remaining of the ZMB lectotype specimen (and nothing left of the MZW syntype) that the placement of A. pacifica  is difficult to confirm. At this stage we contend it should be in Anthothela  as a distinct species, but we do this with some reservation. There are no branches in the lectotype to be able to examine the arrangement of coelenteric canals in a medulla and the spatulate clubs in the pinnules are much smaller than those normally observed in other Anthothela  species. However, some of the main defining characteristics of Anthothela  are evident in the lectotype—the presence of (albeit small) spatulate clubs in the pinnules; all other sclerites as tuberculate sticks and spindles with some clavate; sclerites arranged as collaret and points on the polyp head; sclerites arranged longitudinally on the tentacle rachis and in the pinnules; and the presence of a calyx. Although there is no evidence of branches, there are what are traditionally considered medulla sclerites present in the sample taken of the surface sclerites, perhaps indicative of the ability to form a medulla. All these points support the placement of this specimen in Anthothela  but do not preclude alternative placements.

The other specimen determined as A. pacifica  , USNM 57981, does have a colony form consistent with Anthothela  plus it has distinctive long spatulate clubs in the pinnules. This makes the placement of this specimen in Anthothela  unambiguous. The uncertainty regarding the placement of A. pacifica  thus becomes more a question of whether the USNM specimen and the lectotype are the same species and how they differ from other Anthothela  species. This decision is hampered by the size of the very small fragment of the USNM 57981 specimen available for examination here and its poor condition (possibly formalin affected).

In the lectotype, the sclerites in the pinnules are spatulate clubs but the handles are markedly shorter than those found in any other Anthothela  species thus far described. In fact, all the sclerites from the lectotype are, on average, shorter than their equivalents in other Anthothela  species. In Kükenthal’s (1913) drawing (Figure E) he displays the sclerites as very small in relation to the size of the polyp, arranged haphazardly up the calyx and polyp body. The size difference is noticeable, with average calyx sclerite length in the A. pacifica  lectotype at 0.25 mm while the average length is 0.33 mm in A. grandiflora  .

The differences between A. grandiflora  and the A. pacifica  lectotype include the average size of the sclerites, especially the spatulate clubs in the pinnules, and the single straight club found in the calyx of the lectotype ( Fig. 17View FIGURE 17 Ba). Kükenthal also figures a sclerite like this but states it is from the top part of the polyp. In this study, only one such sclerite was located in the tiny sample taken of the calyx of the lectotype and they are similarly uncommon in the USNM 57981 specimen.

We contend the lectotype of A. pacifica  and the USNM 57981 specimen are conspecific, and given the relatively similar geographic location of the two specimens, the small sclerites and the presence of the straight clubs, this species can be distinguished from other Anthothela  species. Nevertheless, the validity of this species remains questionable due to the paucity of type material and the condition of the other available material. Further material from the type location may be able to resolve this question, particularly using molecular differentiation.

The specimen which Nutting determined as Sympodium armatum  and was synonymised with Clavularia pacifica  by Kükenthal, was not available for investigation. However, another specimen, collected from the same station on the same day and placed in A. pacifica  by Bayer in the Smithsonian collection ( USNM 49519), was found to be too badly affected by formalin to be confidently assigned. It has slightly larger sclerites in the calyx and some curved and bent thorn clubs are present, suggesting it may not be A. pacifica  . 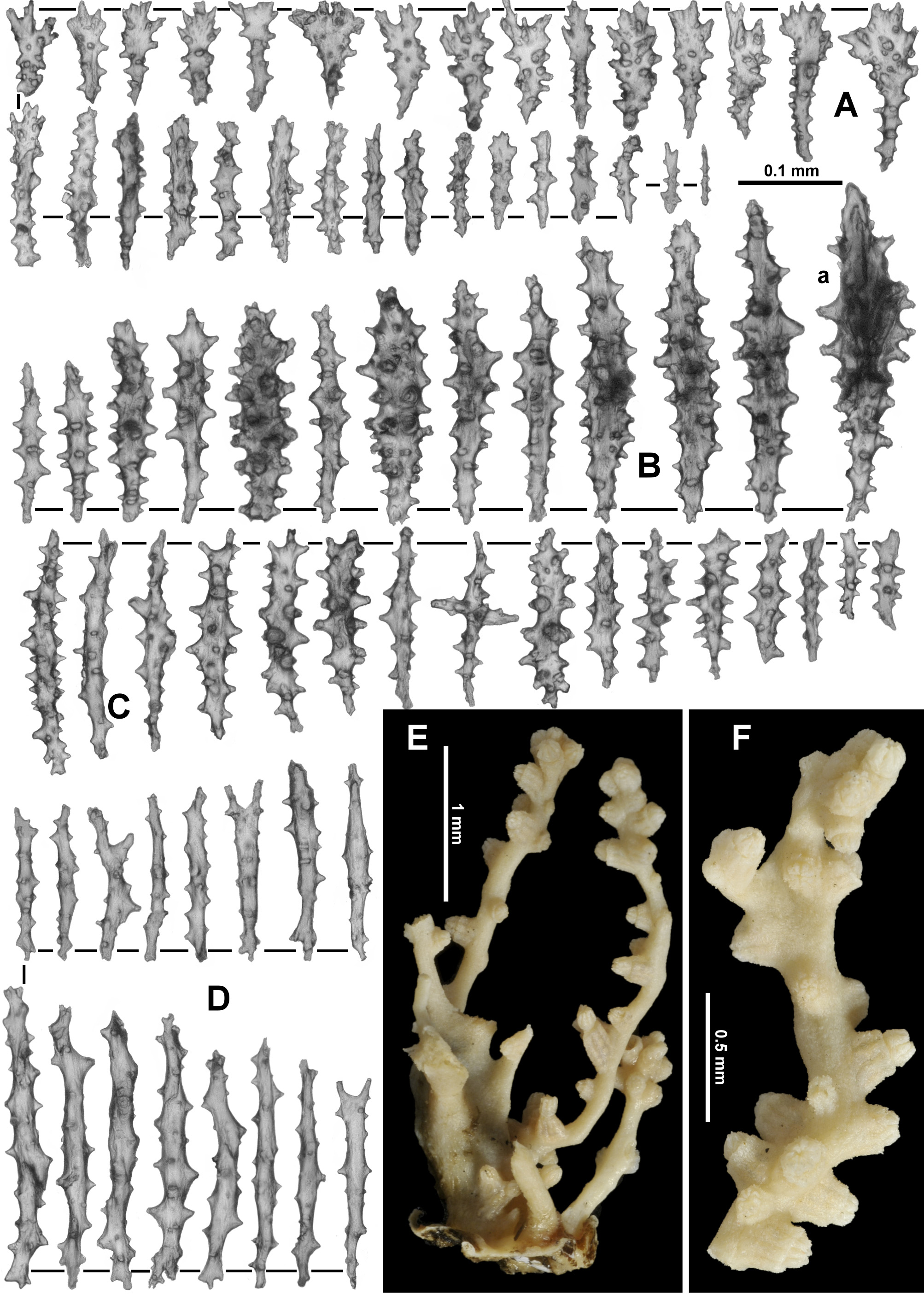 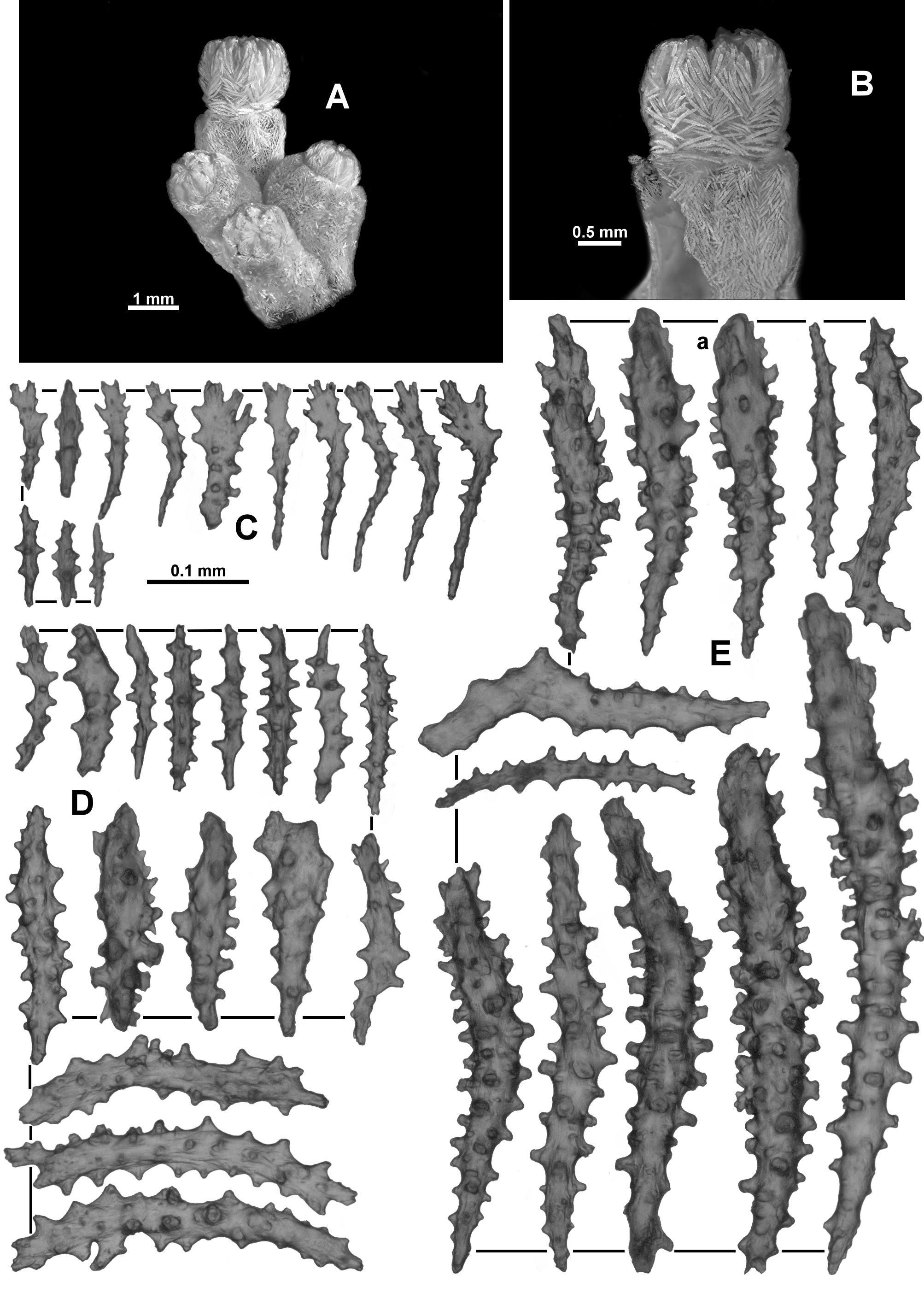 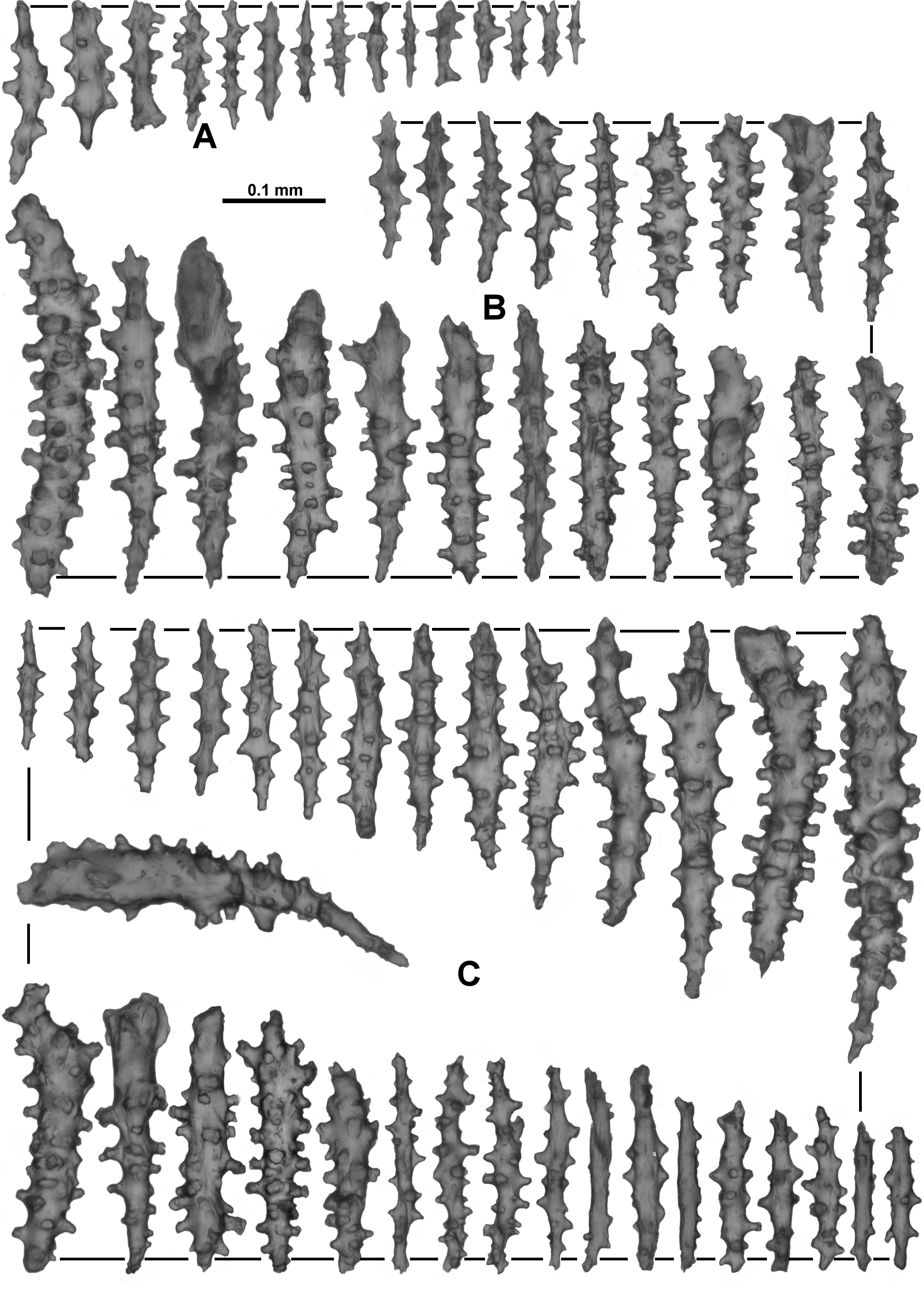