Type locality. R/V Eolis, Hawk Channel  , [Key West], Florida Keys, in 4 fms [7 m] depth. Although not explicitly stated by Bartsch & Rehder but on the basis of Eolis  log data (Bieler & Mikkelsen, 2003) the type was probably collected at Eolis Stations  65 or 66, which was sampled in Hawk Channel off Key West on 15 or 16 May 1913. This is corroborated by the data label in lot USNM 411108 (part of the Henderson material examined by Bartsch & Rehder and from which the type was selected), that explicitly gives the location as Eolis  Station 65. The data label of the other lot believed to be part of the original material, USNM 411270, does not give the station number.

Remarks. Nomenclature. Cerodrillia clappi  is the type of the genus. Confusion regarding the true nature of this species began early with the publication of a guide book (Perry 1940) with the illustration of a different species labeled as C. clappi  . Figure 260 in Perry (1940), and also in Perry & Schwengel (1955), do not match the type of C. clappi  , as captioned, but is a different species, which is described below as Cerodrillia sanibelensis  , new species. Ambiguity about the species continued, Abbott (1974: 271) considered C. clappi  a probable variant of C. perryae  , and Abbott & Morris (1995: 256) called it a form of Cerodrillia thea (Dall, 1884)  . A comparison of shell morphology with other Cerodrillia  supports separation of C. clappi  as discrete species. The confusion continued with the identification of Texas material as C. clappi (Odé, 1991: 25)  but he noted that much of the material in the 16 lots of the Houston Museum of Natural Science (HMNS) survey better resembled C. perryae  figured by Perry & Schwengel (1955: pl. 38, fig. 260 A), rather than their figure of C. clappi  ( C. perryae  was not described as having a mid-whorl stripe; C. clappi  was). Tunnell et al. (2010: 240) changed the identification of the Texas species to Cerodrillia cf. clappi  . The Texas material is neither C. clappi  nor C. perryae  , but rather Douglassia bealiana Schwengel & McGinty, 1942  on the basis of Odé’s description and the figure in Tunnell et al. Variability. The average length of 18 specimens is 9.62 mm (7.7–13.1 mm), and their average W/ L ratio  is 0.392. Bartsch & Rehder include in their description of the species the dark spiral stripe seen in the holotype; however, specimens appear to be variable for this character. Specimens from off Anclote Key, Pasco Co. and deeper water differ somewhat from the Florida Keys specimens from shallower water (27–30 m versus 1–7 m) have somewhat fewer ribs on penultimate whorl (8 versus 8–10) are believed to only represent a regional variation. Curiously, these deeper water specimens all have the faint spiral stripe that is present on the holotype but absent on specimens of the remaining type series. Identification. Cerodrillia clappi  differs from C. perryae  in color, usually off white to light brown with a white base, without a brown band. It differs from C. sanibelensis  , new species, in being more slender and having more ribs. Specimens from Pasco Co. differ from C. harryleei  , new species in possessing more streamlined, not knob-like ribs and are a different color. 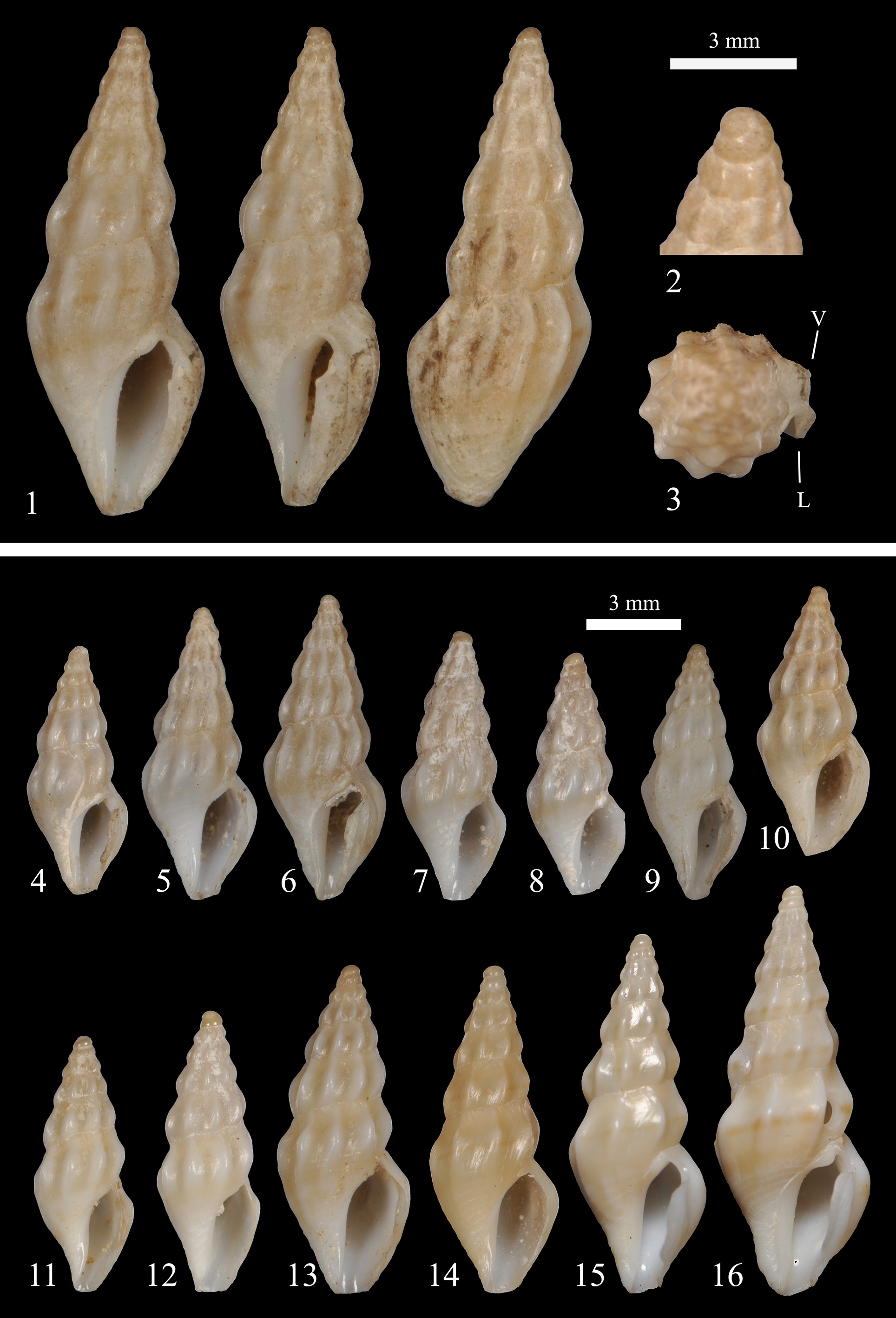